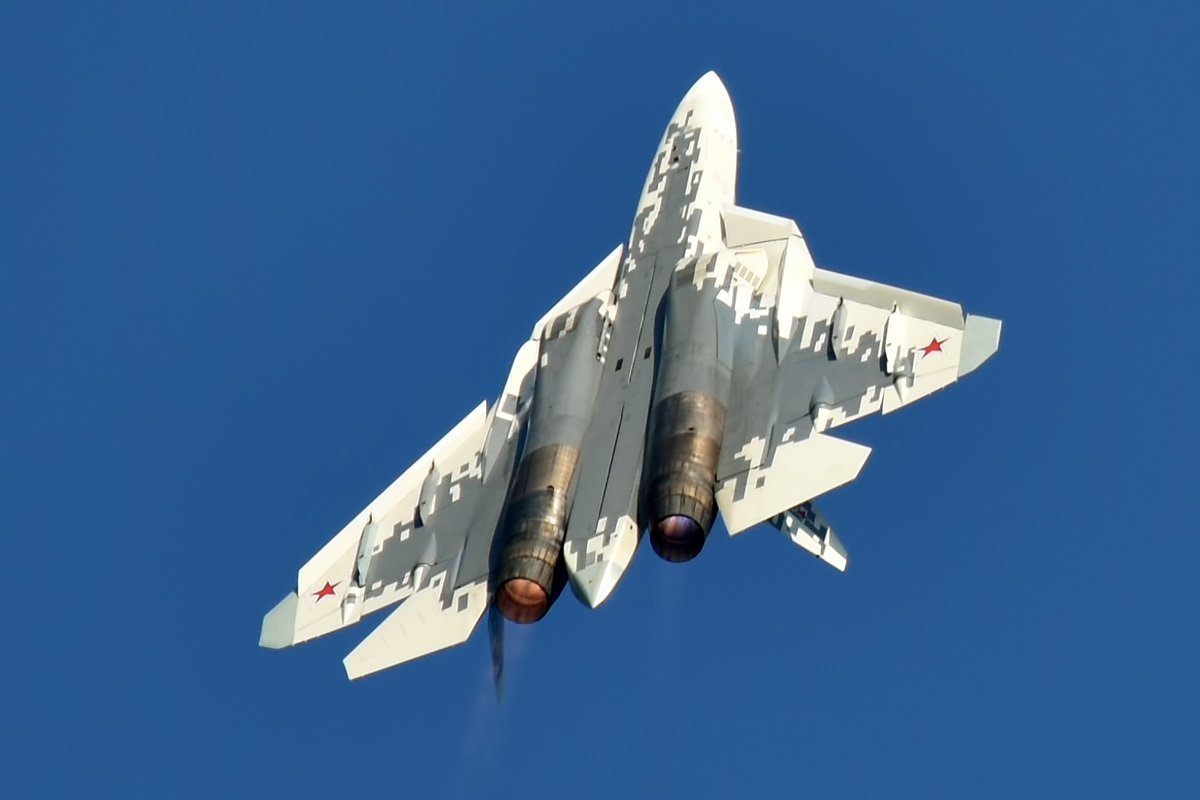 Putin has touted the Su-57 as one of the best fighter jets on the planet today. However, he won’t dare send the 5th generation stealth warbird to battle over Ukraine. Why is that?: The Russian military is again promising and not delivering. A case in point is the next-generation Su-57 Felon fighter. Just what is going on with this highly-touted program? Russian state-run media says the Su-57 is indeed flying missions against Ukraine, but the Felon is likely only firing stand-off missiles outside of Ukrainian air defenses, and this may be happening in Russian air space and not Ukraine’s. The limited use is assuredly a letdown after Russia has trumpeted the Su-57 as an airplane that could outcompete the F-22 and F-35. Dominating the Ukrainians with the Su-57 would happen as a matter of course.

The Numbers Aren’t There

But there may be as few as ten Su-57s in the entire fleet as 1945 has previously reported. The usual suspects in the Russian defense community of “experts” believe the Su-57 has better weapons and radar than the latest American fighters, plus an electronic warfare system that is top-notch.

Not an Optimum Engine Situation

One downside that has stunted the Su-57’s growth is that Russian engineers have their hands full with finicky engines. They wanted the Felon to have the latest Izdeliye-30 engines, but it appears there was trouble with the fit and designers fell back on the older Saturn AL-41F1.

Mishaps Created Turmoil at the Manufacturer

The Su-57 has also endured a rocky history. One of the prototypes had an engine fire in 2014. An Su-57 crashed in 2019 in eastern Russia resulting in a total loss of the airplane, although the pilot safely ejected. Sukhoi’s CEO resigned after the incident, which set the program back.

Is It Really that Stealthy?

Total advancement is not assured and the fighter is probably better described as having stealth characteristics. The Su-57 is not believed to be as stealthy as the F-22, F-35 or China’s J-20.

There Are Still Some Technological Surprises

The Su-57 program has come up with a handful of innovations. The electronically scanned array is situated on the airplane’s “cheeks” for better situational awareness for the pilot. This also allows some advanced maneuvers that could aid in dogfighting. Infrared search and track is onboard for another sensor upgrade. This helps with missile targeting and it can be resistant to enemy jamming. When it comes to incoming enemy missiles, the Su-57 can “blind” the heat-seeking bogeys with a “modulated laser beam.”

But Can It Meet an Ambitious Timeline?

So, the Su-57 has some charms if it can just get to serial production and fly over a battlefield on a regular basis. With less than a dozen operational now, the Russians want 22 models in two years and 76 airplanes by 2028.

The Su-57 is an intriguing program. It’s taken some lumps with its share of bad luck, equipment failures, dodgy engines, delays, and cost over-runs. While innovations such as the ability to soft-kill incoming missiles has definite upside on survivability if that system works adequately.

But the Russian defense industry will be hobbled in the coming years due to Western sanctions. Plus, money and resources are being siphoned off to pay for the war in Ukraine. Are the Felons in the fleet ready for combat now? Russia will likely keep them back to only fly when they are out of surface-to-air missile range. A shoot down of the vaunted Su-57 would be a terrible blow to Russia and a public relations bonanza for the Ukrainians.

If the Russians were to gain air superiority early in the war, as they planned, the Su-57 may have taken on a wider role in the fight. Current production targets are optimistic, and the airplane will likely see more delays before broader manufacturing commences. Until then, Russian media will likely spin the airplane as a better version of American and Chinese stealth fighters.