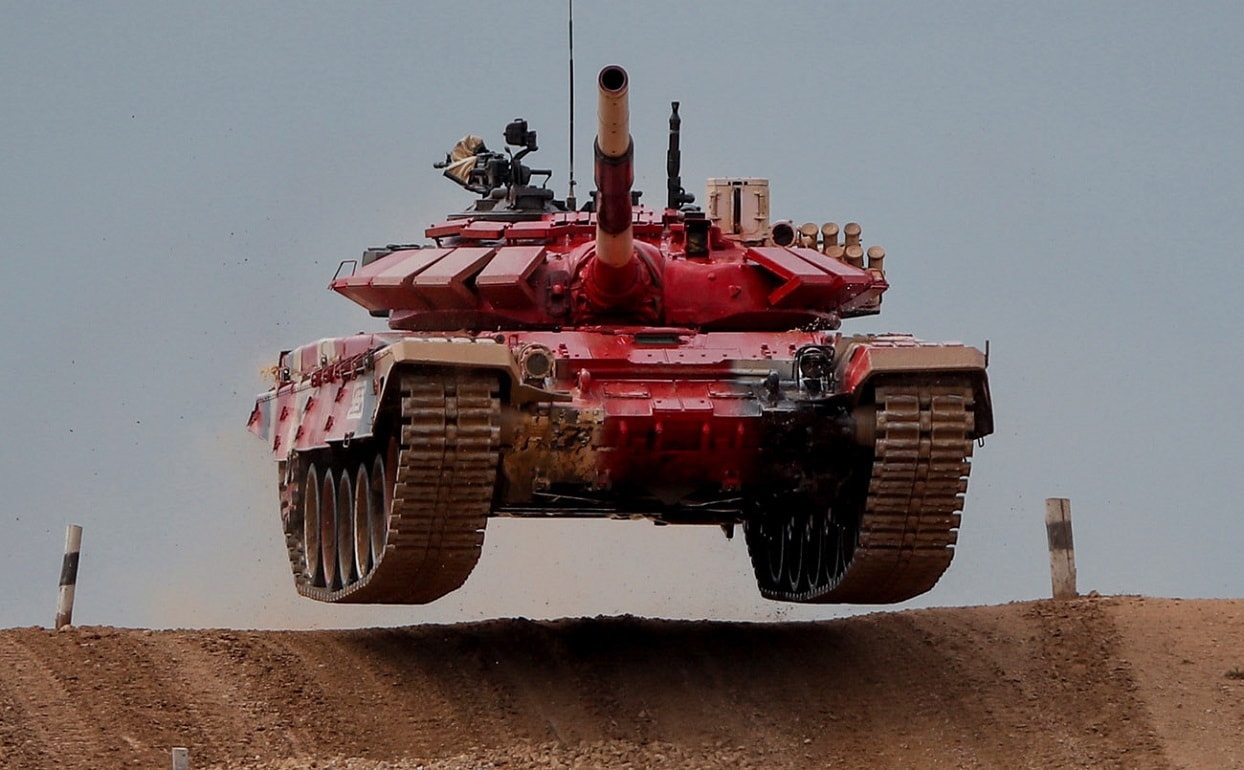 A T-72 B3 tank operated by a crew from Russia jumps during the Tank Biathlon competition at the International Army Games 2020 in Alabino, outside Moscow, Russia September 2, 2020. REUTERS/Maxim Shemetov

An additional dozen destroyed Russian tanks and armored vehicles are adding to the already tank-littered roads in the Luhansk province in the Donbas region of Eastern Ukraine, following a daring strike earlier this month. The column of Russian vehicles was hit by Ukrainian artillery near the occupied port city of Berdyansk.

It was just the latest setback in what had been a very bad week for Kremlin forces.

According to multiple reports, an intercepted phone call revealed that Russian conscripts inadvertently opened fire on pro-Russian separatist forces that were mistaken for Ukrainian soldiers. The uniforms, equipment, and even small arms used by the respective sides are so similar that there have been a number of such friendly fire incidents since the war began nearly five months ago.

However, what is also unique about this latest exchange is that – if true – it suggests that Russian Army conscripts are now serving on the frontlines, despite claims by Russian President Vladimir Putin that such conscripts are not engaged in combat operations.

Russian Gains in the Donbas, Ukraine

The Kremlin’s “special military operation,” which was expected to last a few days at most, is now in its fifth month. However, despite setbacks in the western part of the country, Russia has made significant gains in the Donbas region. Severodonetsk and Lysychansk, which had been the last remaining Ukrainian strongholds in the Luhansk province, have recently been overrun by the Russians.

Russia’s military has taken a pause, possibly to regroup, and it is now believed that it is preparing for an assault on the nearby Slovyansk and Kramatorsk, which would give the Kremlin control of most of Donetsk.

However, the costs have been extremely high for Moscow, which has seen steady losses. The Russian military has already lost more men and materiel in the five months of fighting in Ukraine than what Moscow had lost in the Soviet’s decade-long war in Afghanistan, while Russian losses are nearly four times what the United States military lost in Afghanistan and Iraq combined!

An additional “victory” for Ukraine also came last week when a Russian tank and truck loaded with ammunition were destroyed in the Kharkiv Region, the Strategic Communications Department of the Armed Forces of Ukraine announced via the social media app Telegram. A video of the action has been shared on YouTube.

Oleksii Reznikov, the Ukrainian defense minister, said President Zelensky has ordered his generals to come up with a plan for recapturing the south of the country. Reznikov told the UK’s The Times newspaper on Sunday that Ukraine’s armed forces are now one million-strong, but still require help from the west to fight Russia.

In this article:Russia, Tanks, Ukraine, Video, War in Ukraine