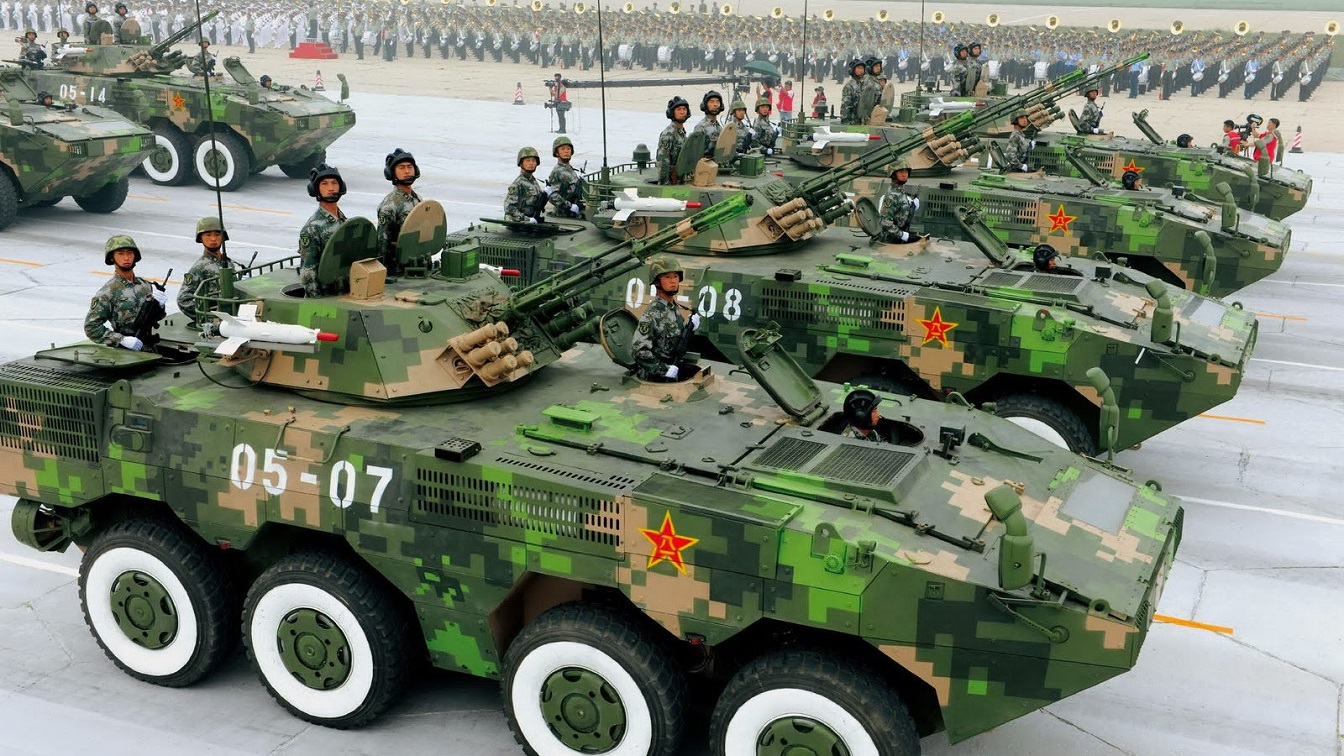 China may have the world’s most impressive fleets of heavily armed amphibious armored fighting vehicles—and it’s no secret why: Taiwan.

Beijing has made it the People’s Liberation Army’s job to build up a sizeable amphibious force credibly capable of assaulting the island, which the Chinese Communist Party regards as a renegade province. As of 2022, there are six Ground Forces brigades and six PLA Navy Marine Corps brigades, totaling roughly 60,000 personnel, equipped with amphibious mechanized vehicles specifically for that contingency.

China Has a Fleet of Amphibious Vehicles

The most important is the Type 05 family of tracked amphibious vehicles, notably the ZBD-05 (formerly ZBD-2000) infantry fighting vehicle and the ZTD-05 assault gun.

The ZBD may be the world’s fastest amphibious tank, able to swim 18 miles per hour (the ZTD, 15.5 mph), more than twice the speed of the AAVP-7 troop carrier used by the U.S. Marine Corps. That could leave defending forces less than half the normally expected time to pick off the attacking vehicles before they roll onto the beach.

To achieve this, the ZBD and ZTD use a dual-mode 550-horsepower diesel engine which can nearly triple output to 1,475 horsepower to power their twin water jets. Furthermore, they are designed with a unique planning hull shape, designed to lift the hull above the water like a motorboat when moving at high speed, thereby reducing drag.  Aquadynamics are also enhanced by the prow, which automatically adjusts its angle based on fluid resistance, and by retracting the vehicle’s road wheels sideways into the hull.

Once on the beach, the ZBD and ZTD benefit from expensive hydropneumatics suspension to negotiate wet, sandy terrain.

In terms of protection, Type 05s have aluminum hulls reinforced with steel front plate armor and all-welded-turrets, making them proof against .50-caliber weapons from the front, and small arms from the side and rear. Their rear storage ‘bustles’ also function as slat armor to foul portable anti-tank weapons.

That said, Type 05s remain vulnerable to most anti-armor weapons, though they are equipped with laser-warning receivers that will warn the crew if they’re painted by the targeter of a laser-guided missile, giving the crew a chance to discharge smoke grenades for obfuscation.

The 29-ton ZBD-05 fighting vehicle can carry eight infantry dismounts and is armed with a rapid-firing 30-millimeter autocannon effective against lighter armored vehicles and personnel as well as a turret machinegun.

The ZTD-05 instead has a .50-caliber anti-aircraft machine gun and a ZPL-98A 105-millimeter rifled gun, a lightweight derivative of the British L7 tank gun. It can penetrate up to 600-millimeters RHA equivalent using kinetic APFSDS shells, adequate to defeat the frontal armor of an M48 or M60 Patton tank, but not an M1 Abrams outfitted with depleted uranium armor. Because this gun requires a human loader, the ZTD-05 has an expanded crew of four.

The ZTD is a Tank With Extras

Though the ZTD-5 arguably qualifies as a ‘tank’ on technical merits—combining an enclosed turret with a big gun on a tracked vehicle—functionally it’s designated an ‘assault gun’ because it’s meant to provide direct fire on hard target in support of accompanying infantry, not lead breakthroughs into enemy lines.

Both vehicles also have a turret-mounted launcher for two somewhat dated HJ-73C semi-automatically guided anti-tank missiles with a range of 1.86 miles (a distance the missile traverses in 25 seconds). The missile can penetrate 500-millimeter RHA equivalent with its tandem warhead.

Type 05 also comes in a ZSD-05 APC model and radar-equipped reconnaissance variant, both with armament reduced to a .50 caliber machinegun, as well as command, armored recovery (with crane and winch), and ambulance variants.

Perhaps the most notable is the Assault Breaching Vehicle model sporting a mine plow, counter-mine sensors, and the capability to launch mine-clearing line charges (or MICLICS) – cables stuffed full of plastic explosives that can be rocket-launched dozens of meters away – and then remotely detonated so as to blast a path through a minefield. These would lead any landing operation by clearing ‘safe’ lanes through beaches strewn with mines, barbed wire, and anti-vehicle obstacles.

A lighter counterpart to the Type 05 family is the 23-ton ZBL-08 ‘Snow Leopard’ eight-wheeled infantry fighting vehicle (also known as the ZBL-09) and the 25-ton ZTL-11 assault gun. These have twin water jets, but lack the aquadynamic features and dual-mode engines of the ZBDs, and thus can only swim at 5-8 miles per hour on the water.

These might make the ship-to-shore journey only after the beachhead is secured by faster-swimming ZBDs. However, once a landing force can penetrate into the inland road network, ZBLs become more nimble than their tracked counterparts with a maximum road speed of 60 miles per hour.

The Snow Leopard has similar systems and armor protection to the ZBD/ZTD, but can optionally mount reinforced frontal armor protecting against the 23-25-millimeter cannons of other IFVs. The ZTL-11 assault gun additionally features an ST-16 radar for targeting identification, acquisition, and tracking; and extra smoke grenade dischargers for concealment. The ZBL-08 has even more specialized subvariants than the Type 05, including the PGL-12 35-millimeter mobile anti-aircraft gun, PGL-625 gun/missile air defense vehicle, PLL-05 120-millimeter mortar carrier, and more.

The ZTD-05’s hull is also combined with the turret of the PLZ-07 122-millimeter self-propelled howitzer in the amphibious PLZ-07B artillery vehicle. The 25-ton  vehicle has a crew of five, and its semi-automatically loading PL-96 gun (based on Soviet D-30 howitzer) has a maximum range of 11 miles, or up to 17 using rocket-propelled shells. The similar PLL-09 instead uses the hull of the ZBD and can mount either a 122- or 155-millimeter gun.

PLA Ground Forces also operate some ZBD-04 vehicles (formerly ZBD-97) inspired by Russia’s BMP-3 fighting vehicle, with the turret packing both a 100-millimeter low-velocity gun and a 30-millimeter autocannon, while the hull still accommodates up to seven infantrymen.

China is still phasing out the last of its Type 63A amphibious tanks, based on the Soviet PT-76 tank. The ultimate Type 63A model is more heavily armed with a stabilized 105-millimeter gun and can swim a brisk 17 miles per hour.

In turn the PLA Marine Corps is integrating new Type 15 light tanks, which have an autoloading 105-millimeter gun and decent protection and sensors—but though air transportable, they aren’t amphibious.

How China’s Amphibious Armor is Organized

Both PLA Ground Forces (ie. the ‘Army’) and the PLA Navy Marine Corps use amphibious armor.

Since the 2017 reorganization of the PLA, six of the Ground Force’s roughly 87 brigades are Amphibious Combined Arms units earmarked for a potential amphibious landing targeting Taiwan or its outlying islands. These brigades are divided into three group armies: the 72nd (based in Hangzhou, Zhejiang), the 73rd (Zhangzhou, Fujian), and the 74th (Buluo and Bao’an, Guangdong).

Each brigade has four amphibious combined arms battalions. Those in turn have two companies of mechanized infantry (14 IFVs or APCs each), two companies of assault guns (14 ZTDs or ZTLs), as well as one fire support company armed with mortars and man-portable air defense missiles (MANPADS).

The PLA Marine Corps, meanwhile has six Marine brigades, each with two battalions equipped with ZBL-05 ad ZTD-05 vehicles; one ‘light battalion’ with ZBL-08-type vehicles; and an artillery battalion of PLZ-07B vehicles. Currently, only 2-3 of these brigades is fully equipped, however. You can read more about the PLANMC organization in this article.