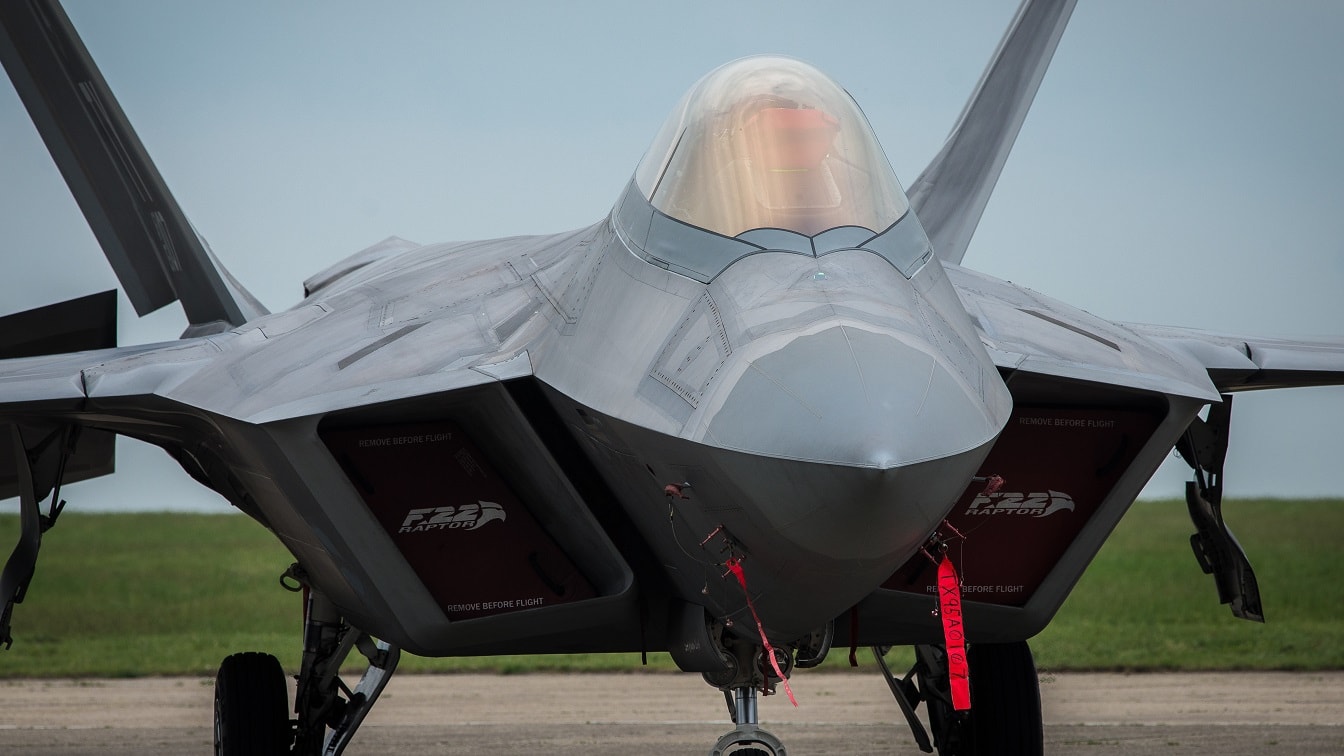 A U.S. Air Force F-22A Raptor parked on the flightline at Mihail Kogalniceanu Air Base, Romania, April 25, 2016. The aircraft will conduct air training with other Europe-based aircraft and will also forward deploy from England to maximize training opportunities while demonstrating the U.S. commitment to NATO allies and the security of Europe. The Raptors are deployed from the 95th Fighter Squadron, Tyndall Air Force Base, Florida. (U.S. Air Force photo by Tech. Sgt. Ryan Crane/Released)

Following the visit of U.S. Speaker of the House Nancy Pelosi to Taiwan, China is threatening the small island nation with war. Right now, dozens of Chinese aircraft and warships are conducting military drills and wargames in the seas and skies around Taiwan.

The Taiwanese military can do little but watch and be vigilant. Any attempts to harass the Chinese military drills could quickly get out of control and give Beijing an excuse to invade and thus precipitate the decades-long process of reunification.

Deterrence is the strongest weapon of the Taiwanese military right now. And to make itself the hardest possible target and thus dissuade a Chinese invasion, Taipei could use some U.S. weapon systems.

Here is a list of three weapon systems that the Taiwanese military could use to increase its deterrence. It is important to note that this is a hypothetical list, and there is no indication that the U.S. military is considering—or indeed is capable—of sending the following weapon systems to Taiwan.

In a potential conflict with China, air superiority would be key. Whoever controls the skies can dictate what is going on on the ground and the seas.

The F-22 Raptor is the world’s best air superiority fighter jet. A fifth-generation aircraft with stealth capabilities, the F-22 Raptor combines stealth, speed, agility, and sensory capabilities into one package.

The F-22 Raptor can operate to altitudes of up to 50,000 feet and has an effective range of almost 1,900 miles (but with the addition of two external fuel tanks that would detract from its stealth capabilities). The stealth fighter jet is pretty fast, too with a top speed of Mach 2 and the ability to supercruise, or maintain supersonic flight with the use of afterburners.

When it comes to munitions, the F-22 Raptor really shines with an ability to carry up to carry two AIM-9 Sidewinder heat-seeking air-to-air missiles and six AIM-120 AMRAAM radar-guided air-to-air missiles in addition to its powerful M61A2 20-millimeter cannon with 480 rounds.

The U.S. Air Force bought only 186 F-22 Raptors before the production line closed, and not all of those are operational today. Attempts to create an export version of the aircraft failed because of the sensitive technology it contains. It is these two factors that make the proposition to sell Taiwan the F-22 Raptor highly unlikely.

But there are some weapon systems that are far more likely to find themselves on Taiwanese soil.

Let’s say that the Chinese military has managed to secure relative air superiority and successfully landed in Taiwan.

The first hours and days of an amphibious landing are the most crucial. The forces on the beachhead are vulnerable and don’t have enough firepower to resist a forceful combined arms counterattack that blends long-range fires, tanks, and mechanized infantry.

If the Taiwanese had the M142 High Mobility Artillery Rocket System (HIMARS) or the M270 Multiple Launch Rocket System (MLRS) in sufficient numbers, it could deter the Chinese military from conducting a landing in Taiwan.

From the east to the west coast, Taiwan is approximately 80 miles long. With the right ammunition, both the M142 HIMARS and the M270 MLRS can reach those distances and still be far from the action to ensure their survival. Both weapon systems fire several different types of 227mm artillery rockets, including the M30 and M31 precision-guided munitions that utilize global positioning system technology to accurately hit targets as far as 43 miles away.

In addition, M142 HIMARS and M270 MLRS can fire the powerful Army Tactical Missile System (ATACMS), a short-range ballistic missile with a range of about 186 miles (or 300 kilometers), which is enough to reach the Chinese mainland.

The M142 HIMARS has a crew of just three men (driver, gunner, and section chief) and can fire its six rockets within seconds before scooting away. The fact that it is a wheeled vehicle, and not a trucked vehicle like the M270 MLRS, allows the M142 HIMARS to quickly move and thus avoid counterbattery fire or roaming enemy air patrols. By the time the first missiles hit the intended target, the M142 HIMARS can be well on its way to a hiding place to replenish its munitions and begin another fire mission.

The M270 MLRS is fairly similar to the M142 HIMARS but with two main differences. On the negative side, the M270 MLRS is trucked, meaning that it isn’t fast and can only reach speeds up to 30 miles (though it can traverse rough terrain). On the positive side, the heavier version of the M142 HIMARS can pack twice the missiles than its wheeled cousin. With 12 missile tubes, a single M270 MLRS can clear a good portion of an enemy beachhead on its own.

The war in Ukraine has shown the devasting effectiveness of both weapon systems, and should Taiwan had them in numbers, it could make life truly hard for any Chinese marine or soldier that lands on Taiwan’s shores.

Back in 2020, the U.S. State Department authorized the sale of 11 M142 HIMARS and related munitions to Taiwan for about $430 million. However, to increase its deterrence capabilities, the Taiwanese military will need a lot more.

In this article:China, F-22, HIMARS, Taiwan