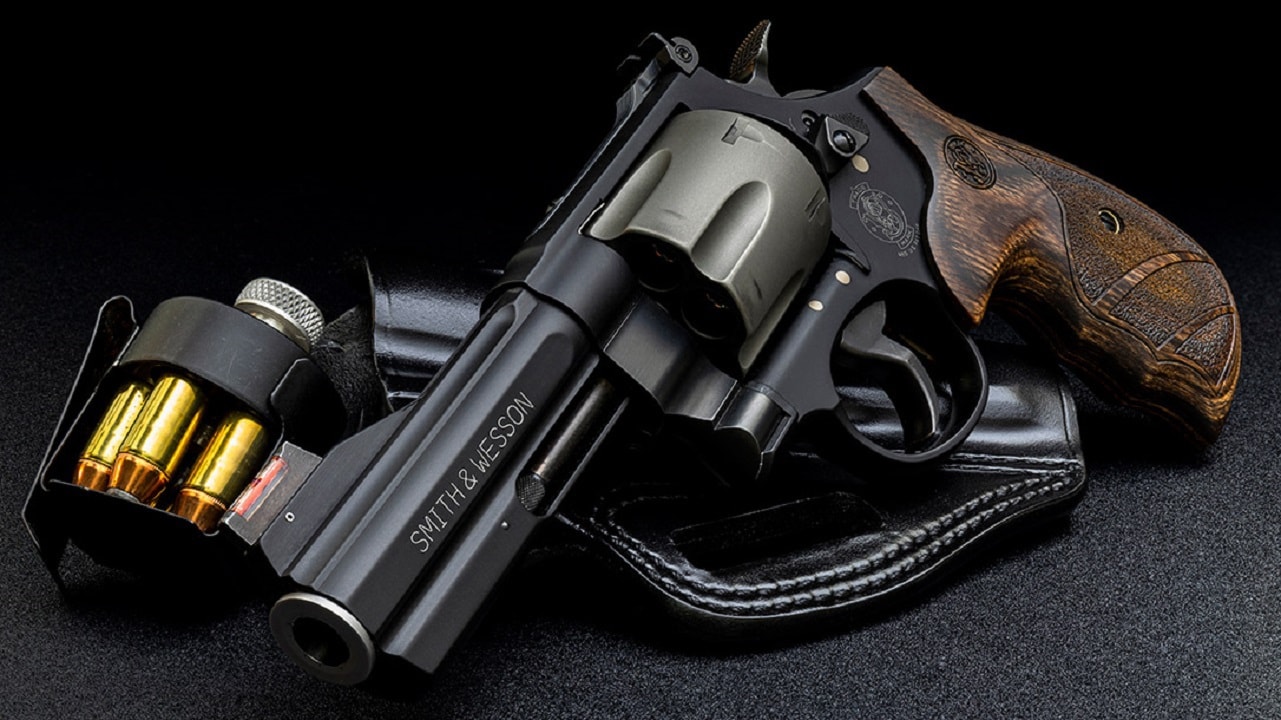 Meet the Model 29: “I know what you’re thinking: ‘Did he fire six shots or only five?’ Well, to tell you the truth, in all this excitement, I’ve kinda lost track myself. But being this is a .44 Magnum, the most powerful handgun in the world, and would blow your head clean off, you’ve got to ask yourself one question: ‘Do I feel lucky?’ Well, do you, punk?”

Any old-school action film fan will instantly recognize that quote: Clint Eastwood as the titular character in the opening scene to the original Dirty Harry film from 1971.

The gun in question is also the original, i.e., the Smith & Wesson (S&W) Model 29, the first gun chambered for the .44 Magnum cartridge. Let’s take a look at this iconic revolver and cartridge combo.

Model 29: A Brief History of Gun and Cartridge

The .44 Remington Magnum cartridge was the brainchild of legendary big-bore revolver guru Elmer Keith (1899 – 1984), who developed it as a more powerful successor to the .44 S&W Special, after years of tuning and handloading the ancestral cartridge to its upper limits.

The .44 Special, in turn, started off in 1908 as the descendant of the .44 S&W Russian cartridge that dates back to 1870. The late great Mr. Keith was also the godfather of the .357 Magnum and .41 Magnum cartridges; impressive ballistic credentials to say the least.

Incidentally, both .44 Special and .44 Russian can be safely chambered and fired in any .44 Mag revolver (though not so with semiauto pistols in the caliber). Indeed, Dirty Harry himself admitted to using Specials in his Model 29 – at least for range practice purposes – in Magnum Force, the second film in the series; however, Hollywood being Hollywood, the filmmakers still embellished the kinder, gentler Special loads with the thunderous muzzle blast and recoil of full-house Maggie loads.

The gun went into production in December 1955, though it wasn’t until sometime in 1957 that S&W applied the official Model 29 designation. The revolver was offered with polished blued or nickel-plated finishes and in barrel length 3″ all the way to 10-5/8”.

Of course, it was Clint Eastwood’s movie character that really sent the Model 29’s popularity soaring through the roof; as Ammo.Com columnist Sam Jacobs notes, “Demand for the Model 29 was so sharp after the release of that film that people were easily paying three times the list price because gun shops simply could not keep them in stock.” (emphasis added)

My first time shooting a Smith .44 Mag revolver was actually the stainless steel version, the Model 629, at the now-defunct Santa Anita Firing Range in Monrovia, California; ‘twas September 1990, I had just turned 15 y/o the month prior, and it was my first large-bore revolver shooting experience of any kind. On that day, I stuck with the .44 Specials, and I was very pleasantly surprised by just how mild-shooting the caliber was. After all, I knew that the loading was less potent than the Magnum offspring, but I still expected fairly substantial muzzle blast and recoil thanks to (1) the aforementioned shooting range scene in Magnum Force and (2) my assumption that any caliber starting with a “.4” had had to have a big boom. I definitely had a positive first impression. (In case anybody’s wondering, my first experience with full-house .44 Mag loads happened two months later, via a Ruger Redhawk at The Target Range in Van Muys, Calif.)

Fast-forward to November 2011. Upon returning from my first Iraq contract, I decided to use some of the tax-free money I’d accumulated by treating myself to a couple of new firearms to add to my so-called “Orr-senal of Democracy.” So I went to a gun shop – whose name, unfortunately, escapes my senile memory – in Prescott, Arizona, and decided to render homage to both Dirty Harry and James Bond by purchasing an S&W M29 and a Walther PPK. In the case of the revolver, I stuck with the blue finish – even though I prefer stainless and nickel for maintenance reasons – and a 6.5” bbl. Over the following nine years before I sold her – alas, I too was hit by the financial crunch of 2020 – the Smith Maggie served me quite well.

Except for the factory wood grips. As I’ve mentioned in previous articles, I am not a fan of wood grips on revolvers in any caliber; they may look pretty, but for shooting comfort and recoil control, they flat-out suck. In the case of this big blaster, the grips literally made me bleed at the base of my thumb; un, hello McFly, the purpose of a firearm is to draw the target’s blood, not the shooter’s! It didn’t take long for me to swap out for aftermarket grips, which significantly increased shooting comfort, though obviously, the recoil, muzzle flip, and muzzle blast weren’t going away.

Trigger pull was delightfully smooth in double-action mode and crisp in single-action mode, as is typical of Smith & Wesson. Accuracy was also top-notch, with 25-yard head shots and 50-yard torso shots being readily obtainable. Reliability was flawless. 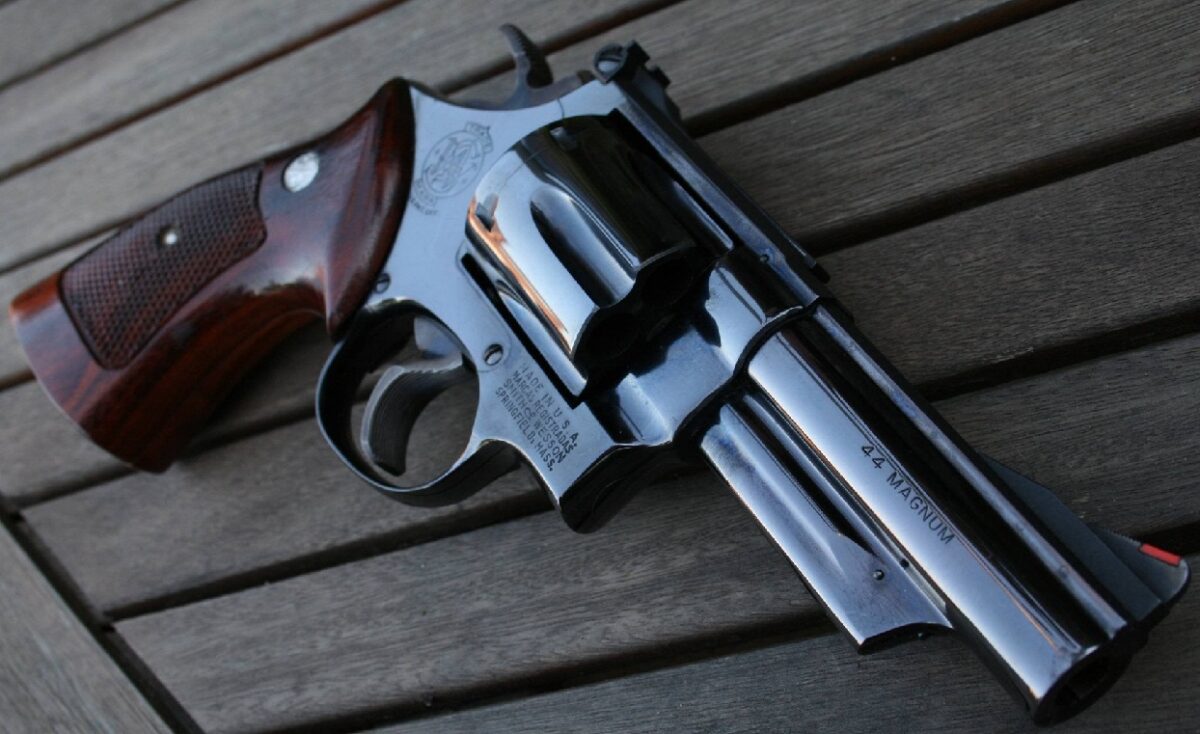 The S&W M29 may not be as strong and durable as the Ruger Redhawks Super Redhawks, and Super Blackhawks in the same caliber – there are certain heavy loads you’ll only want to shoot in the latter brand, not the former – but as long as you stick with standard-pressure and standard bullet weight 180-grain, 240-grain, and 210-grain .44 Magnum factory loads and/or the Specials and/or Russian loads, she’ll last you a long time.

As long as you’re not overly recoil-sensitive and have a desire to own a hard-hitting piece of firearms history, whether for home defense, handgun hunting, or power-plinking, by all means, buy the Model 29.