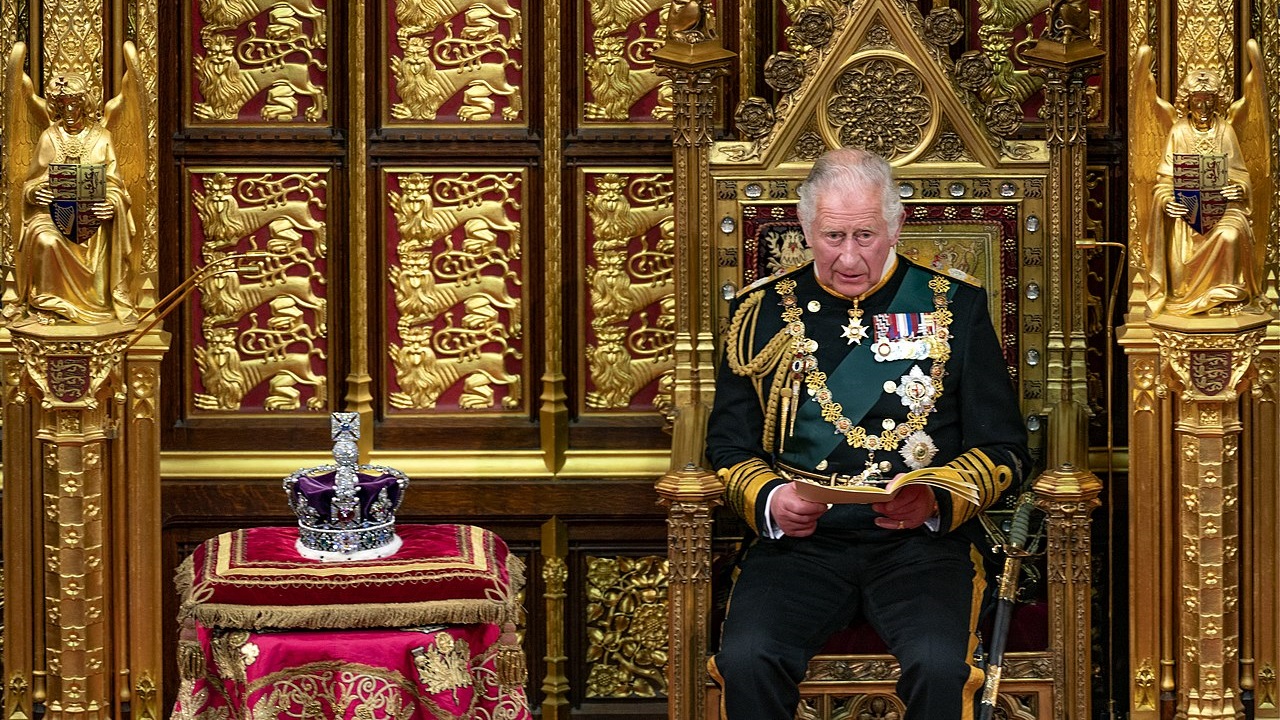 Charles delivering the Queen's Speech on behalf of his mother, May 2022

King Charles III: Could A Different Name Make More Sense? When Queen Elizabeth II passed away earlier today at her Balmoral estate in Scotland, her son, Charles, Prince of Wales, became king and head of state for the United Kingdom of Great Britain and Northern Ireland. The 73-year-old monarch is now the oldest to take the throne in a lineage that dates back nearly 1,000 years.

Groomed from birth to be the future king, Charles Philip Arthur George was born at Buckingham Palace on Nov. 14, 1948, in the 12th year of the reign of his grandfather, King George VI.

Though he was always destined to be king, it wasn’t necessarily a given that he would become King Charles III.

Members of the Royal Family not only have long names, but those who have ascended the throne have just as often than not in recent centuries taken a name different from what they were given at birth. Queen Elizabeth II‘s father was known to the world as King George VI after succeeding his brother King Edward VIII, but he was actually named Albert Frederick Arthur George, and commonly called Bertie by members of the family.

Moreover, though Edward, who was later given the title Duke of Windsor after abdicating to marry the twice-divorced socialite Wallis Simpson, was actually named Edward – as well as Albert Christian George Andrew Patrick David – he went by the latter name with friends and family members.

King George VI took the name to honor his father George V, but perhaps due to the fact that both George’s were second-born sons – the proverbial “spare” to the expected “heir” to the throne. It helped restore the continuity that the UK needed. George V proved to be up to the task of guiding his nation through the First World War, while his son was on the throne for the Second World War.

Where it gets a little confusing, however, is that King George V actually had a brother named George (Edward Alexander Edmund), the Duke of Kent. It reportedly did cause some confusion; at least until Prince George was killed in a military air crash in August 1942.

What’s In a Name?

The choice of the British monarch’s “regnal name” wasn’t actually an issue until Queen Victoria – Elizabeth II’s great-great-grandmother – ascended to the throne in 1837. All prior monarchs had used their first baptismal name as their regal name. Yet, when Victoria was born her uncle, the Prince Regent (future George IV) had specifically prohibited the royal names of Charlotte, Elizabeth, or Georgina.

She was instead named “Alexandrina” after her godfather, the Russian Czar Alexander I. For most of her childhood, she was known as “Drina,” and up until her coronation, many in the general public didn’t know what her official “regnal” name would be.

She could have been Elizabeth II, but instead opted for her second name, Victoria.

The tradition to take a different regnal name then continued with her son Prince Albert Edward when he became King Edward VII, against the wishes of his late mother. The new king, who had never been close to his father, said he choose the name Edward as a way to honor six of his predecessors while he added the name Albert was only associated in royal history with the Prince Consort.

For now, at least, the media has referred to the British monarch as King Charles III, but it may not be a popular choice.

Charles I of England was defeated by the Commonwealth Forces in the English Civil War and later executed. His son Charles II of England was restored to the throne, but is more commonly remembered for his rampant womanizing; while there is also the Jacobite connection to the “Young Pretender” Charles Edward Stuart, who claimed the title “Charles III.”

In the announcement following the death of Queen Elizabeth II, the newly installed British Prime Minister Liz Truss referred to Charles as King Charles III, but there is still a possibility he could take George VII to honor his grandfather.

Whatever his name, those in the British government will be heard stating simply, “Long live the king!”

Expert Biography: A Senior Editor for 1945, Peter Suciu is a Michigan-based writer who has contributed to more than four dozen magazines, newspapers, and websites with over 3,000 published pieces.