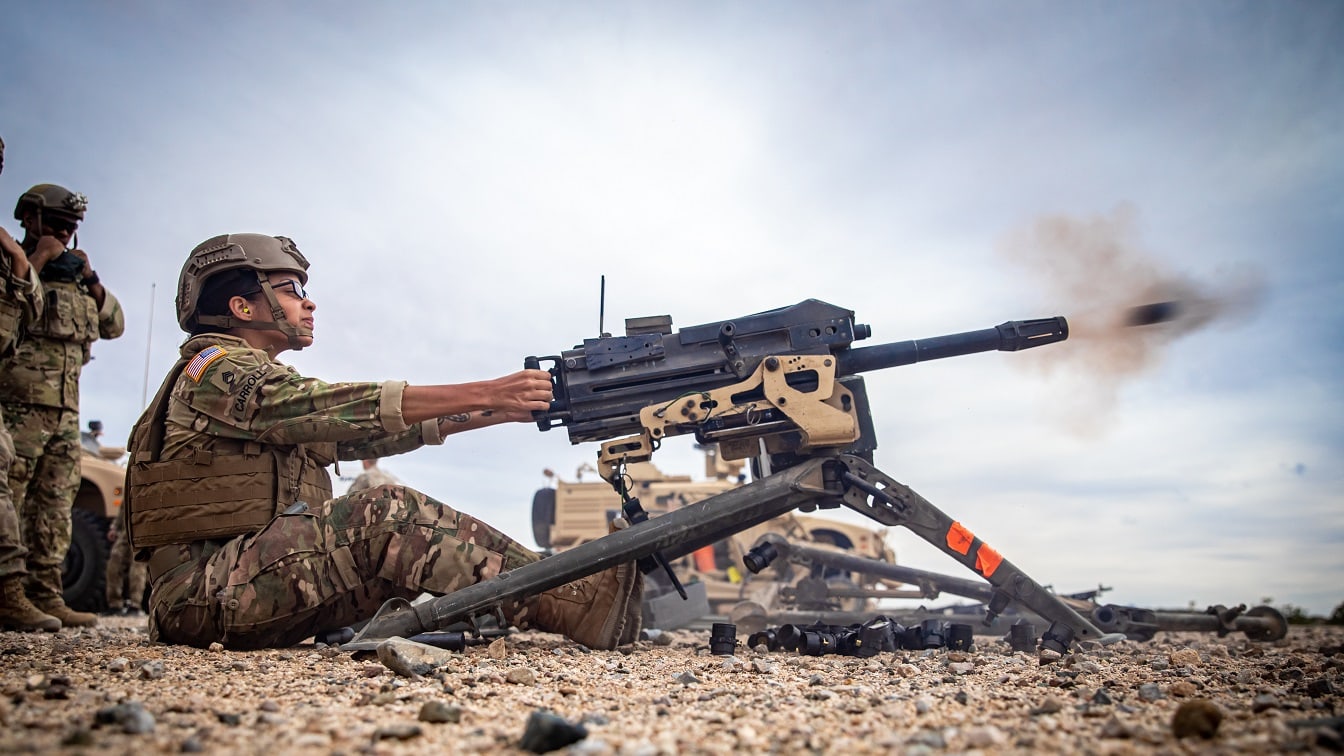 A Soldier assigned to 3rd Special Forces Group (Airborne) fires a MK 19 automatic grenade launcher during a training exercise at Camp McGregor, New Mexico March 26, 2020. The training exercise focused on enhancing a wide variety of skillsets for the participating Green Berets and Soldiers such as weapons training and medical training to prepare them for future operations. (U.S. Army photo by Sgt. Steven Lewis)

The history of the Fuerzas Armadas de México – the Mexican Armed Forces – dates back more than 200 years to 1821, when the United Mexican States achieved independence from Spain. However, following the collapse of the Federal Army during the 1910-1920 Mexican Revolution, the army was reduced in size and its power greatly abridged.

Whereas generals had previously served as heads of state, today the Mexican Army and Navy are controlled by government departments. In addition, each maintains an independent chain of command, with no joint command except for the President of Mexico. In terms of size, the Mexican Armed Forces currently rank 18th in the world with 277,150 active personnel and another 81,500 serving in reserve.

In fact, after decades of decline in overall strength, the force has greatly increased since the 1980s, when fewer than 150,000 personnel were in uniform. Its total annual budget currently exceeds $10.07 billion.

The army maintains approximately 567 main battle tanks (MBTs), while the Mexican Air Force has a fleet of some 58 combat aircraft. The nation’s navy has no aircraft carriers or submarines, but it maintains seven corvettes that are charged with protecting the country’s coastlines.

The Mexican Army’s Fight At Home

Currently, the Mexican Army is the largest branch of the nation’s military and has an active duty force of 198,000. While it has increased significantly in size, according to data from GlobalFirePower.com, its GFP ranking is just 43 out of 142 countries. It is comparable in strength to Bangladesh, the Philippines, and Peru.

However, since the Second World War, the Mexican Army has been strictly a professional force focused on national defense rather than political involvement. In fact, the Mexican Armed Forces have never been deployed to foreign conflicts, even as part of a peacekeeping force. Moreover, prior to the Mexican military’s intervention in the “Mexican Drug War” in 2006, the government primarily maintained a passive stance regarding cartel violence.

That changed in December 2006, when the newly elected President Felipe Calderón sent 6,500 federal troops to the state of Michoacán to end drug violence in the region. That action has been widely regarded as the first major retaliation made against cartel violence and is generally viewed as the starting point of the war between the government and the drug cartels. The cartels flourished during the seven decades that Mexico was ruled by a single party, the Institutional Revolutionary Party (PRI). Within that centralized political structure, drug trafficking groups cultivated a wide network of corrupt officials through which they were able to gain distribution rights, market access, and protection.

Calderón continued to escalate his anti-drug campaign, and currently, there are about 45,000 troops involved along with state and federal police forces. Enrique Peña Nieto (2012–2018), Calderón’s successor, said he would focus more on reducing violence against civilians and businesses than on removing cartels’ leaders, current President Peña Nieto has continued to rely heavily on the military, in combination with the federal police, to battle the cartels.

Just this month, Mexico’s lower house of Congress voted to keep the army on the country’s streets until 2028. It was the second boost to the military’s power this month after the upper house previously approved giving the army control over the National Guard, a military police force created in 2019.

The Mexican Revolution may have ended more than 100 years ago, but the Mexican Army continues to do most of its fighting on Mexico’s streets – a fact that is unlikely to change anytime soon.