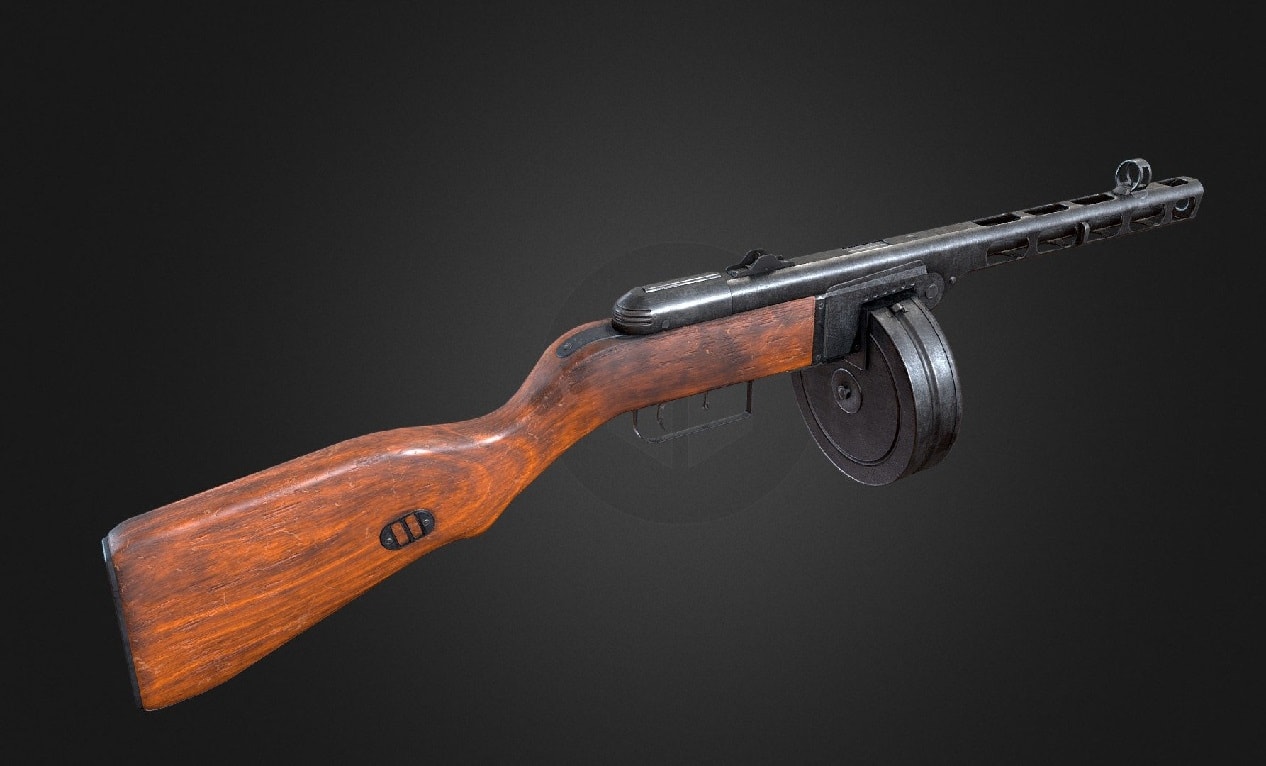 Earlier this week, the Victims of Communism Museum in Washington, D.C. held an event titled “Remembering the Hungarian Freedom Fighters of 1956.” At the reception, VOC’s President, Ambassador Andrew Bremberg, suggested to this reporter that I write a 19FortyFive article on the Hungarian Revolution.

In short article, it would be impossible to do justice to such a significant event. Instead, I opted to focus on a specific weapon used by both sides of the conflict, i.e. the freedom fighters and the oppressors alike: the PPSh-41 7.62x25mm submachine gun.

The Pistolét-pulemyót Shpágina – “Shpagin’s machine pistol” aka the “Papasha” (daddy) – is a Soviet-designed submachine gun (SMG). The Soviet Unition churned out some reliable small arms in their heyday. It was named for its inventor, Georgy Shpagin, who, among other things, was awarded the title of Hero of Socialist Labour and three Order of Lenin decorations for his troubles. Tovarish (“Comrade”) Shpagin developed the gun in 1941 as a successor to the PPD-40 SMG, which in turn had been in Red Army service since 1935. Shpagin geared his SMG design for fast, inexpensive production by semi-skilled workers, making heavy use of stamped steel. Indeed, a “Papasha” SMG could be produced in a mere 7.3 hours, and an estimated 6 million of these guns were produced during the Second World War – or as the Soviets preferred to call it, “The Great Patriotic War”/ Velikaya Otechestvennaya voyna.

The PPsh-41 uses the 7.62x25mm Tokarev cartridge, which generates a muzzle velocity of 1,600 feet per second and a muzzle energy of 514 foot-pounds out of the SMG’s 10.6-inch barrel, with a practical effective range of 150 to 200 meters and a max firing range of 250 meters; the caliber may be a tad bit on the small side for stopping power, but an enemy combatant on the receiving end of a full-auto burst is still going to be in a world of hurt, to say the least. The gun has an overall length of 33.2 inches and an empty weight of 8.0 pounds.

The Papasha fires from an open bolt and employs a direct blowback action. The cyclic rate of fire is 900 rounds per minute; a fiber buffer was affixed to the return-spring guide rod in order to cushion the effects of recoil during full-auto fire, which allegedly resulted in a 70 percent improvement in hit rate compared with the PPD-40. Both 35-round box magazines and 71-round drum magazines were produced, with a typical Red Army soldier’s basic load typically consisting of two or three of the 71-rounders.

The gun proved itself as a rugged and reliable battlefield performer in the “Great Patriotic War” and the Korean War alike.

The “Papasha” and the Hungarian Freedom Fighters

According to Manowar’s Hungarian Weapons & History website, “During 1941-42 the Hungarian Army captured a number of PPSh-41 machine guns on the Eastern Front. These guns were re-issued to Hungarian troops. The troops did not like them, compared to the Hungarian Danuvia 39.M machine guns. The ammunition had a similar effectiveness, but the workmanship and reliability of the PPSh-41 was nowhere when compared to the 39.M. The biggest difference was in accuracy, as PPSh-41’s barrel length was only about half of the M.39’s. The 71-round drum magazine had a tendency of jamming if it was loaded with 65-68 rounds or more. However, the PPSh-41’s shorter length gave it the advantage during house-to-house combat situations … After WW2 the Hungarians were enforced by the Warsaw Pact and the USSR to adopt and use Soviet-type weapons. Interestingly the comparison and the option to chose between the PPSh-41 and the even more improved short Danuvia machine pistol then called Kucher K1 came up again. It is unclear how much political pressure or just plain stupidity steered the choice towards the PPSh-41 … Hungary adopted and manufactured a copy of the Soviet 7.62x25mm PPSh M1941 as the 48.Minta.”

As for the Papasha’s usage by the freedom fighters, arguably the most iconic photo from the Hungarian Revolution is that of a young female freedom fighter wielding one of these SMGs, complete with the 71-round drum magazine. As noted by Balázs Németh on his Cap and Ball website, “The people of the Hugnarian [sic] Revolution of 1956 obtained their PPSh’s from the military and police warehouses. It’s [sic] low maitanence [sic] needs, simple assembly and disassembly, reliable action and good stopping power made this weapon the best choice for the street fights during the revolution.”

In my 33 years of shooting experience, I’ve fired several historically significant full-auto SMGs, namely the American Tommy Gun, Israeli Uzi, German HK MP5, and British Sten Gun. (Well, I’m not sure if we can really count the Sten, as I only got one round through the damn gun before it went kaput). And I’ve fired my fair share of Soviet-designed weapons, from the AK-47 to the SKS to the Mosin-Nagant to the Makarov pistol. Alas, I have yet to fire the PPSh-41. Shame on me, I know!