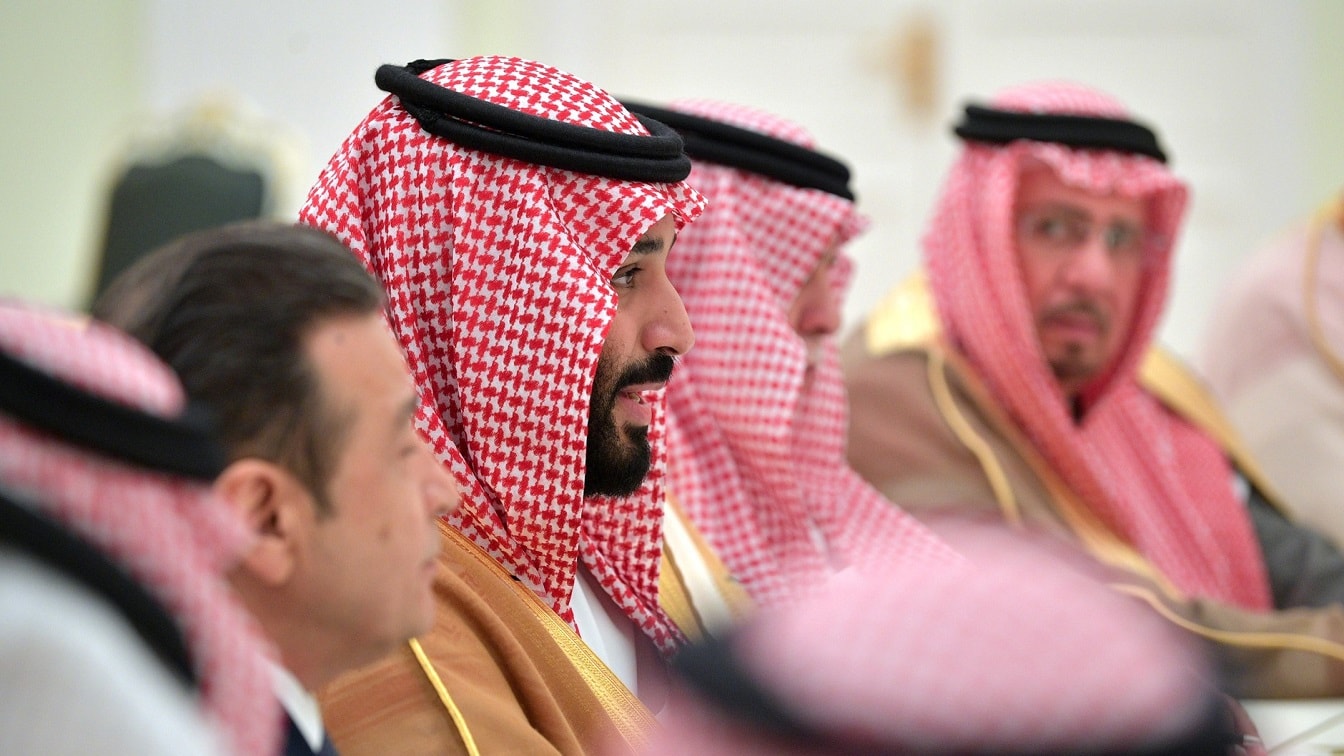 The Saudi royals were wailing about the prospect of an attack from Iran and America responded. The Biden administration rushed to coddle and comfort members of the absolute royal dictatorship, the world’s most ostentatious throwback to Medieval times.

Reported the Wall Street Journal: “the U.S. Central Command launched warplanes based in the Persian Gulf region toward Iran as part of an overall elevated alert status of U.S. and Saudi forces.” Even if Riyadh did not fabricate the supposed Iranian threat, as seems likely, what about the Saudi air force, furnished at such a great cost by America’s famous merchants of death?

The Kingdom of Saudi Arabia’s flyers must have been busy, perhaps taking their friends on joyrides. Riyadh treats expensive warplanes as just another royal pleasure—acquired to allow princely dilettantes to pose as glorious warriors—and a disguised payment to Washington for the presence of US military personnel, who act as bodyguards for the King and courtiers. Crown Prince Mohammed bin Salman, or MbS, as the heir apparent is known, is but the latest Saudi ruler to see Americans as nothing but the émigré “help,” brought in to deal with dirty jobs beneath the royals’ dignity.

The Crown Prince—who gained the sobriquet “Slice ‘n Dice” after having journalist Jamal Khashoggi murdered and dismembered in 2018—treated President Joe Biden accordingly. The latter abandoned his commitment to human rights and traveled to the Persian Gulf to kiss MbS’ feet. After a very public fist bump between the two, the president begged his host to supply some extra oil to speed the drop in gasoline prices, ostensibly to reduce revenue for Russia, but conveniently before the midterm elections. The Saudis took Biden’s measure and treated him with contempt, denying his claim to have mentioned human rights and then cutting oil supplies. Jimmy Carter was the last US president to be so ostentatiously and publicly humiliated.

Biden huffed and puffed, threatening “some consequences,” only to rush to the royals’ defense. Such was his response. If Biden’s inclination is to do Riyadh’s bidding after being savagely gelded by it, what would he have done had he been treated with respect? Offered the Saudis control of Central Command? Or the Pentagon itself? Unsurprisingly, Biden’s position toward Saudi Arabia has not struck fear in the hearts of authoritarians around the globe.

The US relationship with Saudi Arabia, inaccurately called “one of the most important on the planet,” has consistently put Riyadh’s interests above that of America. The reasons for doing so are difficult to discern.

No doubt, the Kingdom presents trade and investment opportunities and US business executives eagerly attended a Saudi economic conference, nicknamed Davos in the Desert, last month. However, such links do not depend on Washington’s celebrated commitment to the royals’ defense. Good capitalists can do commerce without an alliance.

The Kingdom sells oil, an important good, but not as critical as in years past. Moreover, Riyadh does so for its own benefit, not America’s. Without the resulting revenue MbS couldn’t build his palaces and purchase his yachts, chateaus, and other necessities of royal life. A refusal to sell to the US wouldn’t matter since the oil market is global. And total supply would be much greater if the Biden administration had not restricted domestic production, continued sanctions against Iran and Venezuela, and imposed penalties on Russian supplies.

Washington might respond that the last three regimes are odious threats to the peace, but so is Riyadh. According to the group Freedom House, the KSA is more repressive than all three, none of which is known for chopping up regime critics. Although supposedly a US friend, the Kingdom imprisons nearly 100 American citizens, mostly for political offenses. Some of the longest sentences have been imposed in recent months, yet another conspicuous affront to the Biden administration.

The KSA is also aggressive and disruptive. Its war against Yemen has killed hundreds of thousands of civilians. The Saudis funded jihadist insurgents in Syria and Libya, fomenting bloody conflict. Riyadh invited Lebanon’s prime minister to visit, and then detained him; sent troops to back up Bahrain’s dictatorial Sunni monarchy, which rules over a Shia majority; and launched a diplomatic and economic war against Qatar, backed by a threat of military invasion. MbS also is dallying with both Russia, despite its invasion of Ukraine, and China, despite US security concerns. An ally, friend, or partner of America the Kingdom is not.

Although Biden has been nothing but obsequious when dealing with Riyadh, Crown Prince “Slice ‘n Dice” misses the Trump administration, whose officials acted like mob consiglieri, doing their utmost to protect MbS from accountability for his crimes. Hence the Kingdom not only rejected Biden’s request for increased oil supplies but publicized the administration’s request for a delay to push any cuts past the midterm election. The crown prince recognized that though he could neither detain nor dismember the president, he could damage Biden’s political prospects.

The contention of the well-funded Saudi lobby, some of whose members paradoxically claim to defend democracy, is that if successive administrations don’t continue to submissively take Riyadh’s side, treating the Kingdom like the ally it is not, the royals will look for other suitors, most obviously Beijing. Which would turn control of the Middle East over to China, leading to America’s decline, the collapse of the West, and a new Dark Ages descending upon the earth, or a close approximation. It’s a profoundly silly argument, but MbS’s minions augment their case by generously spreading money throughout Washington and far beyond.

The reality is that as the People’s Republic of China grows economically, it will expand its contacts with nations around the world. Most Asian nations, including US treaty allies South Korea and Japan, trade more with the PRC than the US. Continuing to sell out American interests won’t prevent increasing Saudi-China economic relations, soon to be highlighted by a visit by Chinese President Xi Jinping to Riyadh.

As for Beijing taking over defense of the KSA, Washington should beg China to do so. Unfortunately, Xi is committed to his nation’s interests and unlikely to be as solicitous of royal wishes as have successive US administrations. Indeed, the Saudis are unlikely to receive much unconditional love from Beijing, which always seeks something for its exertions on other nations’ behalf, especially one as wealthy as the Kingdom.

Instead of reflexively genuflecting in MbS’s presence, treating Saudi Arabia rather than the US as the superpower, American officials should cancel or suspend plans for expanded military cooperation, such as opening a military testing facility in the Kingdom. They also should suspend new arms sales. To further demonstrate its unhappiness, Washington could halt servicing of existing weapons, threatening to effectively disarm the Saudis.

Another step would be to impose personal sanctions on MbS under the Magnitsky Act and cite Riyadh (and its partner, the UAE) as being state sponsors of terrorism. The royals are much more responsible for murder and mayhem in Yemen than the insurgents, who were labeled terrorists as a final gift by then Secretary of State Mike Pompeo to MbS. (Embarrassingly, Washington is a co-conspirator in the commission of such atrocities.) Just announcing the possibility of sanctions would get the attention of Saudi officials.

Ultimately, the two governments should renegotiate their relationship. For instance, Giorgio Cafiero, CEO of Gulf State Analytics, argued: “With Mohammed bin Salman at the helm, Saudi Arabia is very determined to assert its autonomy from the US. The leadership in Riyadh has been sending many signals to Washington that the Kingdom will pursue its own national interests as perceived by Saudi officials, which includes deepening cooperation with Beijing and Moscow.”

That is a decision the KSA is entitled to make, but the flip side is that Uncle Sam should stop acting like the Saudis’ indentured servant. To start, Washington should indicate that the US sells weapons to the KSA so that the royals ultimately can defend themselves, not remain dependent on Washington. The Biden administration’s first “ask” should be for Saudi Arabia to release American citizens jailed for activities outside of the Kingdom. Washington cannot dictate internal Saudi policy, but it can insist on fair treatment of its own people.

Next, the US should insist that the KSA halt its attacks on Yemen. MbS launched the invasion not because the Kingdom was under attack, but because he wanted to restore a pliant regime to power. The bungled war—Riyadh has proved to be more incompetent even than Moscow in attacking its neighbor—provided Iran with an Allah-sent opportunity to back the insurgents and bleed the royal forces.

The Saudis created one of the world’s worst humanitarian disasters, launching thousands of airstrikes on weddings, funerals, markets, school buses, and other civilian targets. The blockade has done even greater damage, spreading malnutrition and disease. Perhaps 400,000 people have died, most attributable to Riyadh, Abu Dhabi, and their “coalition.” Despite expansive US backing—providing aircraft, munitions, servicing, intelligence, and for a time aerial refueling—the Saudis and Emiratis lost ground, split over strategy, and essentially abandoned the nominal government on whose behalf they went to war. These regimes should stop the killing now. No less than Russia, they deserve to be punished for their crimes.

MbS could, of course, refuse Washington. In which case the US should stop fueling Saudi barbarity by allowing Riyadh’s accumulated stock of US-supplied weapons to eventually be idled. Let the Kingdom prosecute the Yemen war on its own without a working air force. Observed the Cato Institute’s Jordan Cohen and Jonathan Ellis Allen, “the evidence suggests that the United States is empowering Saudi Arabia’s inhumane policies in Yemen. It is inconceivable that Saudi Arabia could commit human rights violations to the same level in Yemen without U.S. military support.”

The Biden administration also should endorse Saudi and Iranian efforts to lower the temperature of what looks uncomfortably like a Shia-Sunni religious conflict. America should stay out of the way while the parties seek a solution. Finally, while Washington should encourage Riyadh to improve relations with Israel, the Biden administration should end the bizarre Trump practice of paying Arab governments to cooperate in their own interest.

After two decades of disastrous misadventures attempting to micro-manage the Middle East, it is time for the US to disengage. The place to start is Saudi Arabia, the region’s most malign actor. Instead of cravenly accepting Riyadh’s dismissive treatment, the Biden administration should act on the president’s stated intention to “reevaluate” ties between the US and the Kingdom. Washington should end the monarchy’s exploitative expectations and reset the relationship on America’s terms.

Doug Bandow is a Senior Fellow at the Cato Institute. A former Special Assistant to President Ronald Reagan, he is author of Foreign Follies: America’s New Global Empire. Bandow is also a Contributing Editor to 19FortyFive.