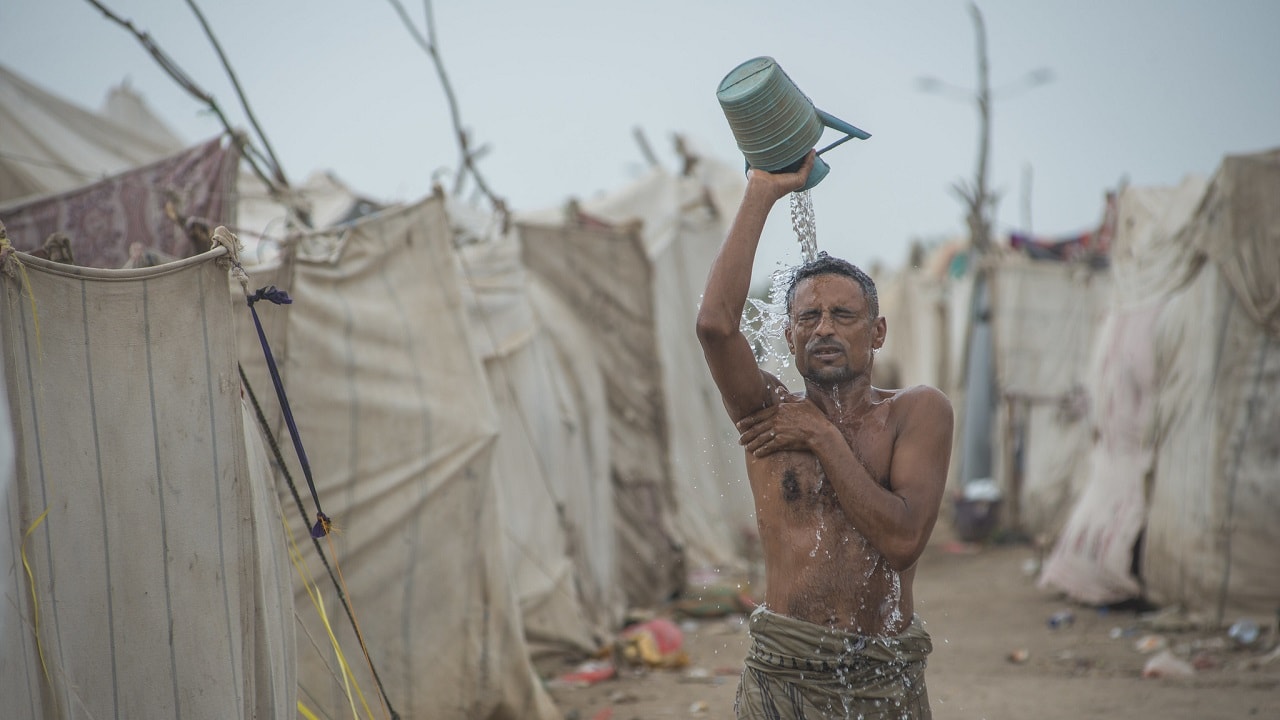 A man, displaced by fighting in the Yemeni city of Hodediah, cools down in the Rabat camp near Aden.

President Joe Biden entered office saying he hoped to bring peace to Yemen. While visiting the State Department last February, he declared: “We’re also stepping up our diplomacy to end the war in Yemen—a war which has created a humanitarian and strategic catastrophe.”

A year later the conflict and US involvement continue. The Biden administration has approved multiple arms deals with the Kingdom of Saudi Arabia. Defense Secretary Lloyd Austin announced several steps to support the United Arab Emirates, including deploying “5th Generation Fighter aircraft to assist the UAE against the current threat and as a clear signal that the United States stands with the UAE as a long-standing strategic partner.” The administration also is considering relisting Yemen’s insurgent Ansar Allah, or the Houthis, as a terrorist organization.

The latter is a particularly bad idea, unless Riyadh and Abu Dhabi are listed as well. Indeed, that might be the most effective way to end the war.

The terrorism designation no longer means terrorism as commonly understood. For instance, the US labels Cuba, Iran, North Korea, and Syria as state sponsors of terrorism. None are actively engaged in terrorism. North Korea and Cuba were added by the Trump administration for other reasons.

Sudan was included in 1993 for harboring terrorists. Even after cooperating with the US in anti-terrorism initiatives, for which it was praised by the State Department, it remained on the list. President Donald Trump removed Khartoum in October 2020 in return for promising diplomatic recognition of Israel.

The Houthis are no more terrorists than any number of other insurgent groups. Indeed, based on conduct, the Kingdom of Saudi Arabia and United Arab Emirates more deserve that designation.

Ironically, the UAE embassy proved the point when it tweeted: “case is clear—launching ballistic and cruise missiles against civilian targets, sustaining aggression, diverting aid to Yemeni people.” The Houthis’ conduct has, of course, been atrocious, but surprisingly modest compared to the egregious behavior of the Saudi-Emirati “coalition,” including its subordinate members, such as Sudan, which provided mercenaries noted for their brutality.

Modern Yemeni history is turbulent and violent. Decades ago Saudi Arabia intervened militarily (fighting against Egypt) in North Yemen’s civil war. Unification of the two Yemeni states merely internalized their conflicts. Ansar Allah was headed by Hussein Badreddin al-Houthi, whose killing by the Saleh government in 2004 spurred the movement’s resistance. Subsequently known as the Houthis, the insurgents joined with former president Ali Abdullah Saleh after his ouster during the Arab Spring and together overthrew his successor, Abdrabbuh Mansur Hadi. These political maneuvers were not directed at Riyadh, Abu Dhabi, or Washington.

However, in early 2015 the Saudis and Emiratis intervened, they said, to restore the “legitimate,” meaning pliable, government in Sanaa. The Obama administration backed their campaign—expected to last weeks, not years—to reassure governments uncomfortable with US negotiations over the Joint Comprehensive Plan of Action with Iran. Among the most important motives of the Trump administration was the sale of weapons for use against the Yemeni population.

The result has been seven years of air attacks on civilian targets in Yemen. Reported the New York Times: “Year after year, the bombs fell—on wedding tents, funeral halls, fishing boats and a school bus, killing thousands of civilians and helping turn Yemen into the world’s worst humanitarian crisis.” Ansar Allah also killed civilians, including with indiscriminate artillery fire. However, the Saudi/Emirati air war is responsible for the bulk of casualties and destruction.

For instance, the latest UN Report of the Group of Eminent International and Regional Experts on Yemen, released last September, detailed: “Since March 2015, over 23,000 airstrikes have been launched by the coalition in Yemen, killing or injuring over 18,000 civilians. Living in a country subjected to an average of 10 airstrikes per day has left millions feeling far from safe. Although the frequency and intensity of airstrikes have fluctuated over the last four years, the Group of Eminent Experts has continued to observe their devastating impact on civilians.”

So serious have been these abuses that the State Department warned the Trump White House of possible legal liability. Reported the New York Times in December 2020: “The civilian death toll from Saudi Arabia’s disastrous air war over Yemen was steadily rising in 2016 when the State Department’s legal office in the Obama administration reached a startling conclusion: Top American officials could be charged with war crimes for approving bomb sales to the Saudis and their partners. Four years later, more than a dozen current and former U.S. officials say the legal risks have only grown.”

The air war combined with the coalition’s de facto blockade to create what the United Nations called the world’s greatest humanitarian crisis. Last fall the United Nations cited the report by UNICEF’s Henrietta Fore that “2.6 million children are now internally displaced, deprived of health care, education, sanitation and safe water. Yemen’s gross domestic product (GDP) has dropped 40 per cent since 2015, and despite the availability of food, 21 million people—including almost 11 million children—require humanitarian aid.” According to Martin Griffiths, UN Under-Secretary-General for Humanitarian Affairs and Emergency Relief Coordinator, “5 million people are one step away from succumbing to famine and the diseases that go with it, and 10 million more are right behind them.”

The UAE’s lower profile in the air war spared it some criticism directed at Riyadh, but its malign activities were broader. For instance, though formally intervening to restore Hadi to office, the Emiratis promoted regional separatism. Reported the Guardian, UAE’s “allies in the south, including local militias, Salafi fighters, and south Yemen separatists who want to break away from Hadi’s government, have been known to fight against the Saudis’ own proxies in the country.”

Abu Dhabi has occupied Socotra Island, apparently in preparation for military and commercial use. The Emirates also supplied US weapons to various armed groups, including militias noted for their human rights violations. CNN concluded that both the UAE and Saudi Arabia transferred US weapons to jihadist groups, including al-Qaeda. Amnesty International warned: “The proliferation of these fighting forces is a recipe for disaster for Yemeni civilians who have already been killed in their thousands.” Finally, Abu Dhabi was involved in secret prisons run by allied groups which engaged in abusive practices.

As for Saudi and Emirati complaints about Houthi missile and drone attacks, the latter began only after Riyadh and Abu Dhabi launched their lethal bombing campaigns in Yemen, which have continued for seven years. Retaliation cannot justify Ansar Allah’s attacks on civilians, but sanctimonious complaints from aggressor governments are risible.

Yet the administration denounces the smallest attack by Ansar Allah while ignoring the coalition’s continuing air assaults and prodigious death toll. Last month’s coalition attack on the Sadah prison, which killed 91, merely garnered a statement urging both sides to commit to diplomacy. Yet the United Nations noted that “Over the past few weeks, air strikes and missile attacks have hit hospitals, telecommunication infrastructure, airports, a water facility and a school” and warned “that January will ‘almost certainly’ be a record for civilian casualties in Yemen.”

The malign role of Iran changes nothing. Although Tehran’s activities are disturbing, they reflect Saudi and Emirati overreach. Iran’s role in Yemen was marginal. Ansar Allah was never a proxy force like Hezbollah. However, the war provided Tehran with an Allah-sent opportunity to bleed its regional adversaries. Moreover, the Houthis had no choice but to turn to Iran, with Washington providing the Saudis and Emiratis advanced aircraft, logistical support, weapons, munitions, intelligence, and, for a time, aerial refueling.

Of course, Washington does not want Yemen, astride important Gulf waterways, in hostile hands. However, underwriting coalition war crimes is no solution. US support for the war has reinforced local animus.

So what to do?

Labeling Ansar Allah a terrorist organization would have no more impact that it did during the Trump administration’s waning days. The Houthis have few international ties to disrupt. Moreover, highlighting Washington’s bias—the National Security Council’s Brett McGurk already has made “perfectly clear there is zero accountability in the U.S. alliance for either Saudi Arabia or the UAE,” noted writer Kate Kizer—would further undermine any US mediation efforts. The most important practical impact of relisting Ansar Allah would be to hinder relief activities, punishing the Yemeni people.

In contrast, declaring the Kingdom and UAE—whose abuses far outpace those of their Yemeni opponents—to be state sponsors of terrorism would have a devastating impact. They would have an incentive to immediately end the war. That wouldn’t halt the tragic fratricide within Yemen, but violent internal divisions go back decades. Ending coalition air attacks and the blockade would offer humanitarian relief and stop retaliatory attacks by Ansar Allah.

Of course, such a step would create a furor—and a financial bonanza for lobbyists. Simpler would be to end US military support for Riyadh and Abu Dhabi so long as American weapons are used against Yemen. If the Saudis and Emiratis continue prosecuting the war, they should do so on their own. That includes defending against retaliation for their attacks on the Yemeni population. Bearing the full burden of the war would encourage them to make peace.

The Obama administration’s decision to back the coalition in Yemen was a tragic mistake. US policy cannot be fixed by minor alterations. The Biden administration should end American support for the Yemen war.