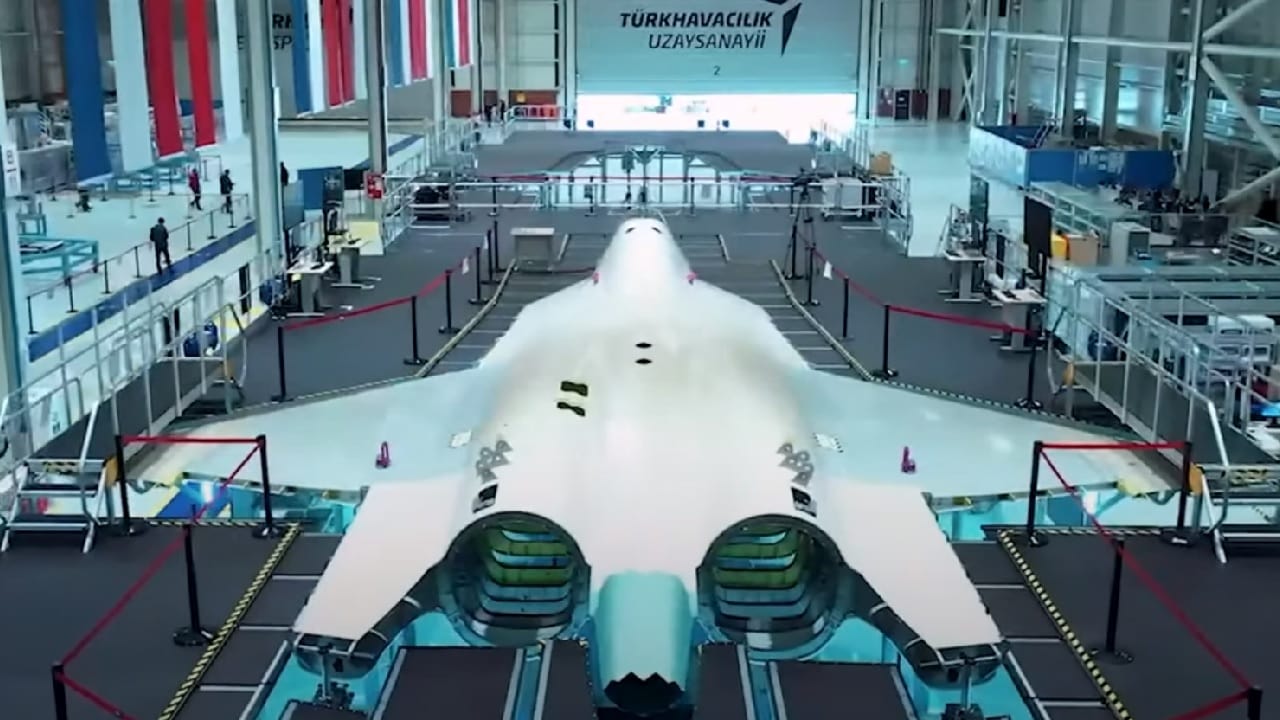 Here Comes the TF-X: When it comes to stealth fighter technology, Turkey is not the first country that springs to mind.

But its military is forging ahead with a homegrown fifth-generation fighter spotted on the production line recently in a video released before the Thanksgiving holiday.

Turkey is arriving as an adept producer of military hardware if you take into consideration its Bayraktar TB2 combat drone that is giving Russia fits in Ukraine.

What Is the TF-X?

The stealth fighter program has been dubbed the TF-X or Milli Muharip Ucak, which is translated as “National Combat Aircraft.”

Turkish Aerospace Industries is the prime defense contractor. It should enter service sometime in the 2030s.

It is a work in progress, but the wings and fuselage have come together on the manufacturing line. No engines are present in the video, but the Turks aim to go for the General Electric F110-GE-129 or F110-GE-132 turbofans with afterburners. An indigenously built engine would take too long to produce.

The Turkish government announced a competition for a homebuilt engine anyway, but that could delay the TF-X program.

No tailfins and stabilizers can be seen in the video. The cockpit appears to have no avionics.

The Turkish Aerospace Industry Is Excited

The airplane had a large group of civilian air force leaders, defense officials, and company representatives clapping and giving thumbs up at the plant in Ankara.

They are clearly happy about the progress of an airplane that will be larger than the F-35 and smaller than the F-22.

The Turkish air force is aiming to replace the older F-16s in its fleet.

Next Year Is the Goal for a Prototype

This prototype could be ready in mid-to-late 2023 although that is a moving target as much work is yet to be completed.

The Turks had a mock-up built for an air show in 2019, so this is not a new and secretive project. Turkish Aerospace Industries worked on the concept between 2011 and 2013.

The first flight is not likely until 2025. The program first gained momentum in 2010. The Turks wanted stealth, fast speeds, and high levels of maneuverability.

It will likely not have the stealth characteristics of an F-35 or F-22 but Turkey could enter an exclusive club with countries such as China and Russia if they can produce a degree of radar evasion on the TF-X.

Turkey originally wanted its own F-35s for the air force and navy, and it reportedly wished to order as many as 100 F-35As. But it was ousted from the Lockheed Martin partnership program in 2019 over a disagreement with the United States. The Turkish military had ordered the advanced S-400 surface-to-air missile system from Russia in a major deal worth $2.5 billion and this annoyed the West. The S-400 was seen as a threat to F-35s flown by Israel.

Why do the Turks want or even need a stealth fighter?

The F-16s it flies are adequate, and they may buy more from the United States. This TF-X is more of a case of “me too” syndrome – a way to gain prestige for its defense industry and become the most fearsome military in the Middle East aside from Israel and Saudi Arabia.

Turkey is also a member of NATO and that is part of the decision-making calculus for lusting after a stealth fighter. The mercurial leader President Recep Tayyip Erdogan is a rascal and seems to get annoyed at perceived slights and is not afraid to stoke tensions with other countries to cement his hold on power.

Greece Is the Problem

Turkey is now tussling with Greece. There has been rhetoric that Ankara would execute some type of attack against Greece. Complicating relations between the two countries is that they are supposed to be allies since both are members of NATO. The problem has been Erdogan’s disapproval of Greece for militarizing islands in the Aegean Sea that the Turks believe to be their territory.

Greece is interested in joining the F-35 program and could someday acquire the Lightning II, probably not until 2028 if all the procedural hurdles are met. This has irked Erdogan and made him more interested in hurrying to build the TF-X. So, this is an arms race with the Greeks.

We’ll keep an eye on the TF-X to gauge how Turkey progresses with its stealth fighter and to see if Greece is successful in ordering the F-35.