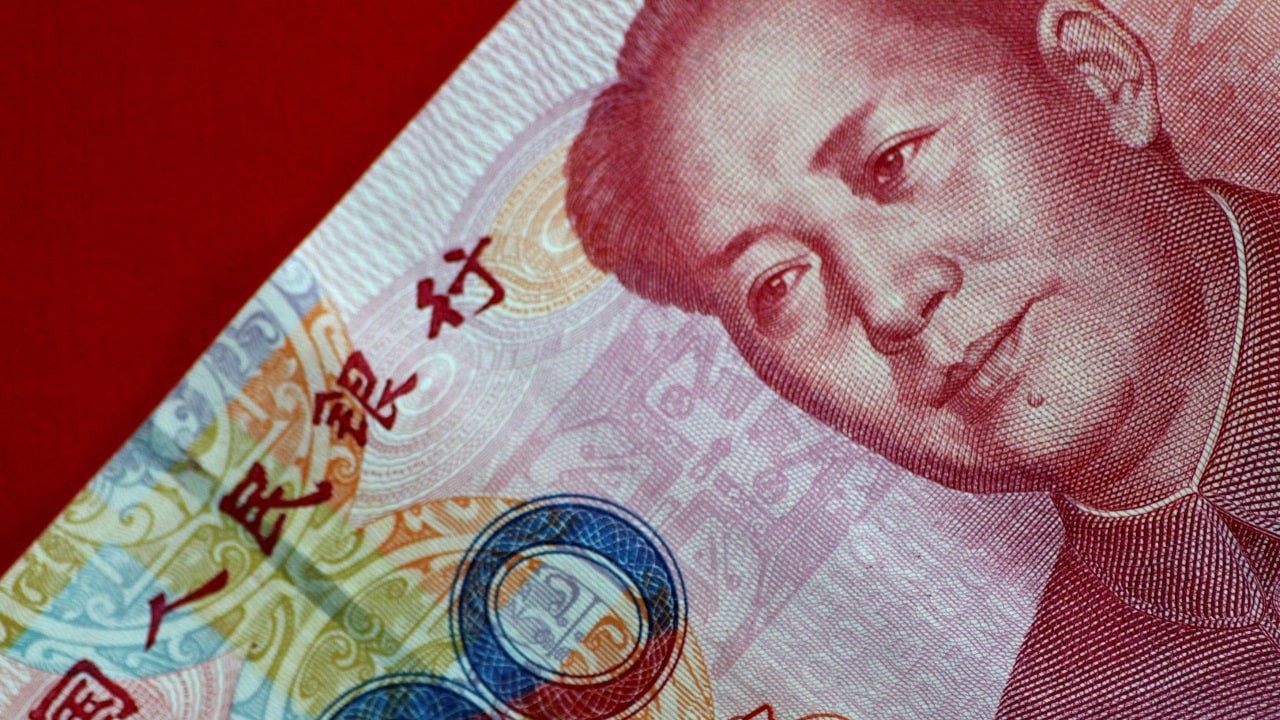 A China yuan note is seen in this illustration photo May 31, 2017. REUTERS/Thomas White/Illustration/File Photo

The US is at economic war with China. No formal congressional declaration was necessary. However, the Biden administration has imposed draconian restrictions on Chinese access to semiconductor chips, while Congress has approved significant subsidies for the chip industry.

Unfortunately, this sort of “industrial policy,” a favorite of ambitious politicians worldwide, is unlikely to turn out well. Government-directed “investment” failed to spur Japan past the US decades ago. So far government-backed enterprises have not delivered chip superiority to China. Expanding US outlays for the industry is unlikely to achieve better results.

A half century ago the People’s Republic of China was isolated and impoverished, a threat to few people other than its own. Today the PRC has dramatically imposed itself on the world. Beijing’s geopolitical ambitions have expanded accordingly.

China poses a unique challenge to America, unlike that from Japan or other aspirants to global influence. The Chinese Communist Party (CCP) is Leninist if not Marxist, determined to rule everyone and everything in the PRC. An increasingly totalitarian state sits atop a large economy, able to conscript nominally private enterprises and wealth for aggressive purposes.

Beijing has used means fair and foul to acquire Western technology. Unsurprisingly, despite its move to the market, China has long maintained a heavy state hand on the economy. Examples include high-employment government enterprises backed by state banks and other preferential policies. The PRC’s trading partners have generally pressed Beijing to cut such support and move closer to the market, though even nominally liberal states in the West also employ politically determined industry subsidies.

China is spending heavily to gain control of leading technologies. With burgeoning talk of “decoupling,” an increasing number of governments are responding with their own industrial policies. Even economically open nations sometimes attempt to promote “winners” to surpass competitors. PRC critics are increasingly pressing nominally liberal governments to mimic Beijing’s approach and subsidize critical industries.

Traditionally, industrial policy has been an instrument of national, not allied, policy. Forty years ago, some Americans feared Japan would overtake the US economically. That would have been embarrassing for Washington, not catastrophic. (In 1991 a book appeared predicting conflict with Tokyo, but the volume was an outlier.) However, Japan’s economy soon stalled, dissipating those concerns. A number of US friends in East Asia currently employ elements of industrial policy with little reaction from Washington.

Still, over the years the US offered various degrees of support for the industry. A decade ago, the Obama administration created a program to mimic German industrial support. The initiative survives, but without much emphasis or achievement, it seems.

As the process of innovation continues, there are essential industries using pathbreaking technologies which all countries would like to dominate. The economic benefits of doing so are obvious. In a liberal market order, lagging behind may be inconvenient and costly—but it is not geopolitically crippling. Every nation cannot be number one. Nor is there any reason to believe that more government economic intervention, simultaneously pervasive and counterproductive around the world, would produce better overall economic results.

Of course, since World War II, at least, and perhaps earlier, the US has expected to be in the lead. It won the technological race with the Soviet Union. And it was far ahead of China as the latter entered the global marketplace. Americans could comfort themselves that even as the PRC grew it was better at imitation than innovation. But no longer.

Moreover, in contrast to Japan, China challenges not just individual countries but the overall liberal order. Its Leninist state can promote and take advantage of technological “victories.” Beijing would have little compunction about using any edge, however procured, to its geopolitical advantage. While the worst case might not occur, with talk of conflict now scorching the Sino-American relationship, economic and technological developments could become weapons of war.

Receiving much attention these days have been artificial intelligence, broadband cellular networks (now the fifth generation), robotics, and semiconductor chips. All are important and backed by subsidy advocates, especially members of the relevant industries. The US Congress recently passed the CHIPS Act of 2022, which provided $52 billion for chip production and more than $200 billion for research in several critical areas. Widely lauded as a bipartisan victory, the measure was sharply criticized as a special interest payoff by market advocates.

Other relatively liberal countries also are attempting to attract chip manufacturers; for instance, the United Kingdom imagines matching Taiwan and its next generation of chips. (Even friends squabble when they are competing vigorously for the same market: Europeans, South Koreans, and others have sharply criticized new US subsidies for electric cars. Some foreign officials have even called the measure a “betrayal.”)

Whether the CHIPS Act is a one-off measure, an element of an informal industrial policy, or the start of something larger and more systematic is unclear, but the presumed China menace yielded a bipartisan vote in an otherwise sharply divided Congress. And supporters want this to be just the beginning. Brian Deese, Director of President Joe Biden’s National Economic Council, told the New York Times that “The question really needs to move from why do we pursue an industrial strategy to how do we pursue one.” He added: “This will allow us to really shape the rules of where the most cutting-edge innovation happens.”

Even classical liberals recognize that the exigencies of national security sometimes require abandoning, or at least bending, market principles. Adam Smith, author of The Wealth of Nations, allowed for Great Britain’s need to maintain a shipping industry. However, these market advocates also warn that national security all too often is used as an excuse for mercantilist economic policies. Indeed, semiconductors, though a critically important input for consumer and military goods alike, demonstrate this phenomenon, as well as the failure of politicized economic decision-making. The broader the government involvement, the poorer the likely results.

For instance, trade hawk Clyde Prestowitz lauded Japan’s much-dated Ministry of International Trade and Industry for that nation’s early success in chip production: “MITI sent written instructions to Japan’s major chip users telling them to buy Japanese. Japan’s banks were directed by MITI to make cheap capital available for investment in semiconductors. Japan’s Ministry of Finance intervened in international currency markets to maintain a weak yen versus the dollar, reducing the price of Japanese exports and vice versa.” Yet MITI’s record was much inflated. Moreover, Tokyo long ago lost its early lead, and is not an important factor in today’s calculations.

Moreover, the PRC has gotten little for the cash tsunami that it has poured into semiconductors. Beijing’s program is ambitious, both wide-ranging and well-funded. China spends more on industrial policy than any other nation and even more than it devotes to (military) defense. In fact, some observers believe the subsidies primarily reflect an attempt to bolster faltering productivity. A review of city industrial policy found that “financial favors disproportionately target loss-making, larger, older, and less productive firms.”

Despite making semiconductor chips a major priority, China lags behind the US by two generations and accounts for only a marginal share of chips by value. That nation’s chief advances have come with lower-end chips. Many firms, some heavily subsidized, have closed. Moreover, program leaders are being investigated for corruption. The latter issue is particularly embarrassing, since it has occurred in the midst of Beijing’s larger anti-corruption campaign. Even the PRC’s zero-COVID policy has emerged as a barrier to China’s hope to overtake the US in this area. (This is not to say that Chinese firms have had no success, but that costs appear to dramatically outstrip benefits.)

Could the right mix of abundant yuan and ideological lectures, perhaps mixed with threats of prison, turn around China’s program? No doubt, CCP General Secretary Xi Jinping will do his best, but he is reconstituting ideological controls over the economy. That is likely to turn out even worse than the Biden administration’s exactions. Lincicome doubts that enhancing the authority of party apparatchiks will promote innovation: “Industrial policy likely shoulders much of the blame for the current state of the Chinese semiconductor industry, which features rampant misallocation of resources, ineffective implementation, corruption, and a significant shortage of human capital, as well as heavy reliance on well‐funded but uncompetitive state‐owned enterprises (SOEs).”

With a much more market-oriented approach, the US has remained well ahead of the PRC. And without massive subsidies from governments of all stripes the chip shortages of 2020 turned into the chip surpluses of 2022. But what now? Biden administration officials plan to follow politics in implementing the CHIPS Act. Commerce Secretary Gina Raimondo intoned: “There are a lot of strings attached and a lot of taxpayer protections.” Political strings do not bode well for economic productivity.

Indeed, the Commerce Department already has set forth conditions unrelated to the bill’s purpose of ensuring swift development of high quality chips: “The Department expects to give preference to projects that include state and local incentive packages that maximize local competitiveness, invest in the surrounding community, and prioritize broad economic gains” and those in which applicants “provide evidence of significant worker and community investments, including commitments from educational institutions for worker training, with specific commitments to disadvantaged groups.” However otherwise laudable these objectives may be, they are more likely to hinder than spur US chip production.

Finally, Beijing does not develop its policy in isolation. The PRC ramped up its support for industry in the aftermath of the 2008 financial crisis, which was seen as discrediting the US economic model. Today Chinese leaders continue to play off Washington’s economic policies, which they see, correctly, as increasingly designed to restrain if not halt the PRC’s rise. Admittedly, mutual distrust might be too great to achieve mutual restraint. Nevertheless, succumbing to an expensive, bad policy without first exploring diplomatic alternatives to forge a subsidy ceasefire is foolish.

China poses a serious challenge to America, but all-out economic war is likely to be more damaging than the problem. Like real wars, economic conflicts often turn out unexpectedly and badly, and in this one Washington could find itself fighting without allies. Attempting to punish Beijing will damage US producers as well. Despite possessing a stronger, more advanced economy Americans ultimately are likely to pay a high price if Washington political apparatchiks end up controlling the chip industry’s future.

Doug Bandow is a Senior Fellow at the Cato Institute. A former Special Assistant to President Ronald Reagan, he is author of Foreign Follies: America’s New Global Empire. Bandow is also a 19FortyFive Contributing Editor.