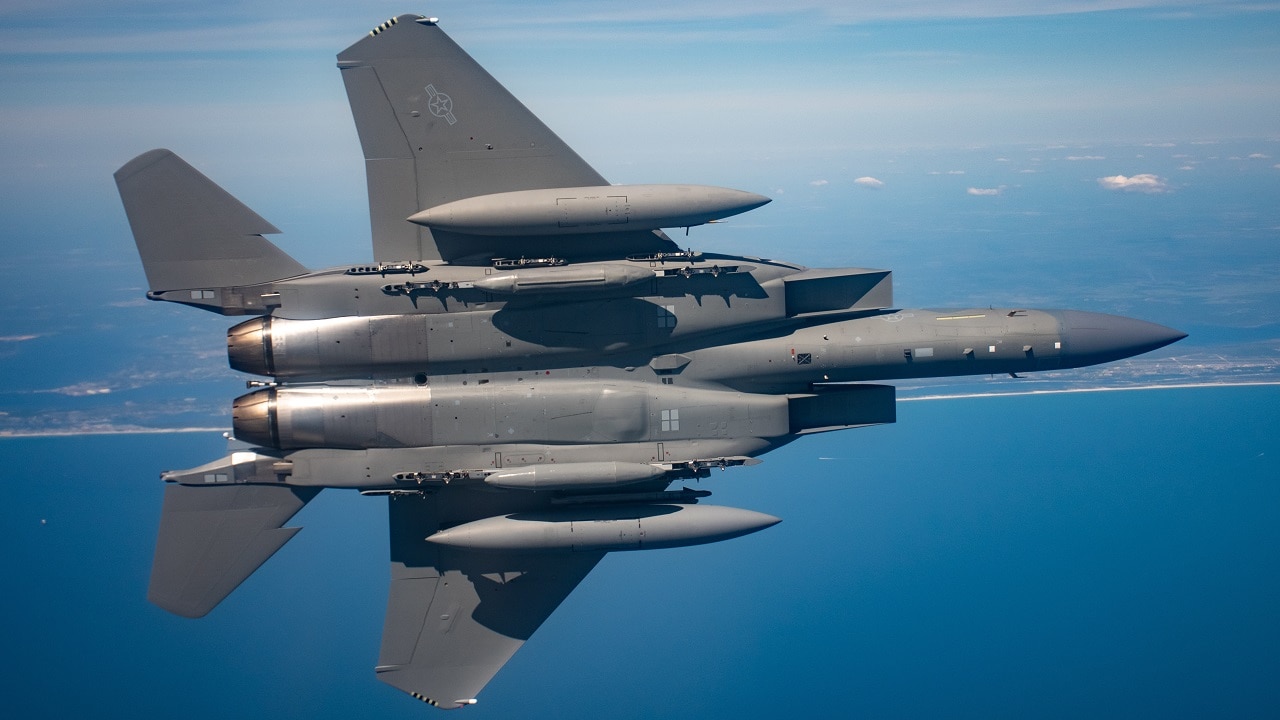 An F-15EX Eagle II from the 85th Test and Evaluation Squadron, 53rd Wing, takes flight for the first time out of Eglin Air Force Base, Fla., April 26, 2021, prior to departure for Northern Edge 2021. The F-15EX brings next-generation combat technology to a highly successful fighter airframe that is capable of projecting power across multiple domains for the Joint Force. (U.S Air Force photo by 1st Lt Savanah Bray)

Kill the Logistics Fleet: The U.S. armed forces can accomplish little in the Western Pacific without ample and regular supplies of all types, from fuel to ammunition to foodstuffs. Prospective foes—read China—know this. They will go after the logistics fleet hauling matériel to the fighting forces, making it a priority target set.

And why not? That’s what I would do were I in charge of the People’s Liberation Army (PLA). Deprive hostile forces of what they need to accomplish their combat missions and you may as well have defeated them in a decisive battle. They slink away when they run out of supplies.

Better yet, they may never even reach the battleground.

The U.S. Army gets this. Or at least army chieftains are saying the right things. Army Chief of Staff James McConville recently told an event hosted by Politico, “we believe we’ll have what we call contested logistics” and intend to devise ways to assure that stores get through. Adds Army Secretary Christine Wormuth, supply “isn’t the sexiest thing, frankly, the Army does, but it is very important. Just look at how the Russian military in Ukraine has struggled to resupply and feed its soldiers. That shows you the importance of logistics today on a contested battlefield.”

Military grandmaster Carl von Clausewitz depicts a combatant’s “center of gravity,” in lyrical and seemingly less-than-actionable terms, as “the hub of all power and movement, on which everything depends.” The center of gravity derives from a belligerent’s “dominant characteristics,” and represents “the point against which all our energies should be directed” in order to triumph in battle. Once commanders have ascertained what constitutes a fighting force’s center of gravity and struck at it, they should rain “blow after blow” on it to keep the foe from recovering from the initial shock.

Clausewitz is—contain your surprise—somewhat vague and abstruse when identifying specific centers of gravity. He declares that the center of gravity resides wherever a warring state exhibits “cohesion.” Pound away at that core again and again and enemy legions lose cohesion. Either their leadership capitulates or they can no longer put up a fight. Clausewitz does go on to list candidates for the center of gravity. As a good soldier, he ranks the army as the prime center of gravity “if it is at all significant.” Next comes the capital, assuming it’s the administrative, social, and political center of the country. Then comes breaking a hostile alliance to simplify the problem. He also mentions leadership and popular opinion, almost as an afterthought.

Whatever unites a combatant is it.

Disrupting combat logistics constitutes an indirect way of assaulting U.S. Army and affiliated expeditionary forces, America’s chief center of gravity in Clausewitzian parlance. Because they only play away games at long distances from North America, U.S. forces cannot prevail without lavish support. Assailing stores ships, not to mention tanker or transport aircraft, would comport with Chinese military doctrine, which envisions waging “systems-destruction warfare” against a stronger foe operating far from home. If an enemy fights as a “system of systems,” such as a fleet, corps, or expeditionary air force, PLA commanders try to discern what binds that system of systems together, imparting cohesion. Then they attack the sinews. If successful China’s defenders dissolve the enemy force into isolated clots of combat power—small formations or individual units—that can be overwhelmed one by one.

The electromagnetic spectrum is one obvious adhesive for any military force. For fleet-tactics maven Captain Wayne Hughes the determinants of tactical and operational effectiveness are weapons range, scouting, and command-and-control. Modern forces depend on the electromagnetic spectrum for all of these functions. It’s how they detect, track, and target hostile forces at a distance. If PLA forces can disrupt U.S. use of the spectrum, they can fulfill the aims of systems-destruction warfare. But again, logistics is even more fundamental to any system of systems. Expeditionary forces stranded without seaborne or airborne supplies are by definition tactically and operationally ineffective. They accomplish nothing. 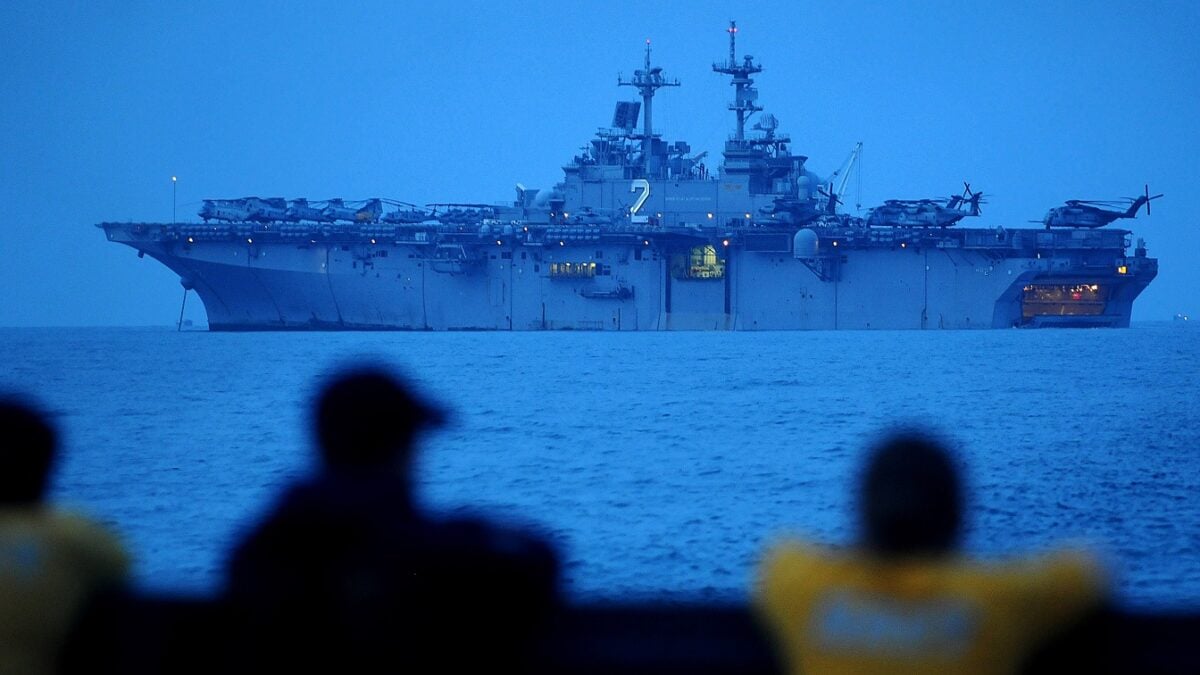 U.S. Sailors watch from a landing craft as they pull away from the forward-deployed amphibious assault ship USS Essex (LHD 2) off the coast of Cambodia in the Gulf of Thailand, March 2, 2011. Essex is the lead ship of the Essex Amphibious Ready Group and was participating in Maritime Exercise 11, a theater security cooperation visit to improve capabilities of the United States and Royal Cambodian Armed Forces. (DoD photo by Mass Communication Specialist 3rd Class Adam M. Bennett, U.S. Navy/Released).

In short, logistics is a center of gravity for the U.S. armed forces. If a foe lands hammer blow after hammer blow against the logistics fleet, it could prevail without even venturing an apocalyptic battle in the Western Pacific. For Xi Jinping & Co., employing such indirect means would chart an expedient and relatively risk-free route to victory in the Taiwan Strait, South China Sea, or East China Sea. It would deny U.S. forces already in the theater adequate reinforcements while preventing Washington from keeping its commitments to Asian allies.

Military leaders like McConville and Wormuth, along with their counterparts in the sea and aviation services, say soothing things about correcting shortfalls in the supply realm. Let’s hold them to their words.

Everything could depend on it.

Dr. James Holmes is J. C. Wylie Chair of Maritime Strategy at the Naval War College and a Nonresident Fellow at the University of Georgia School of Public and International Affairs. The views voiced here are his alone. Holmes is also a Contributing Editor to 19FortyFive.