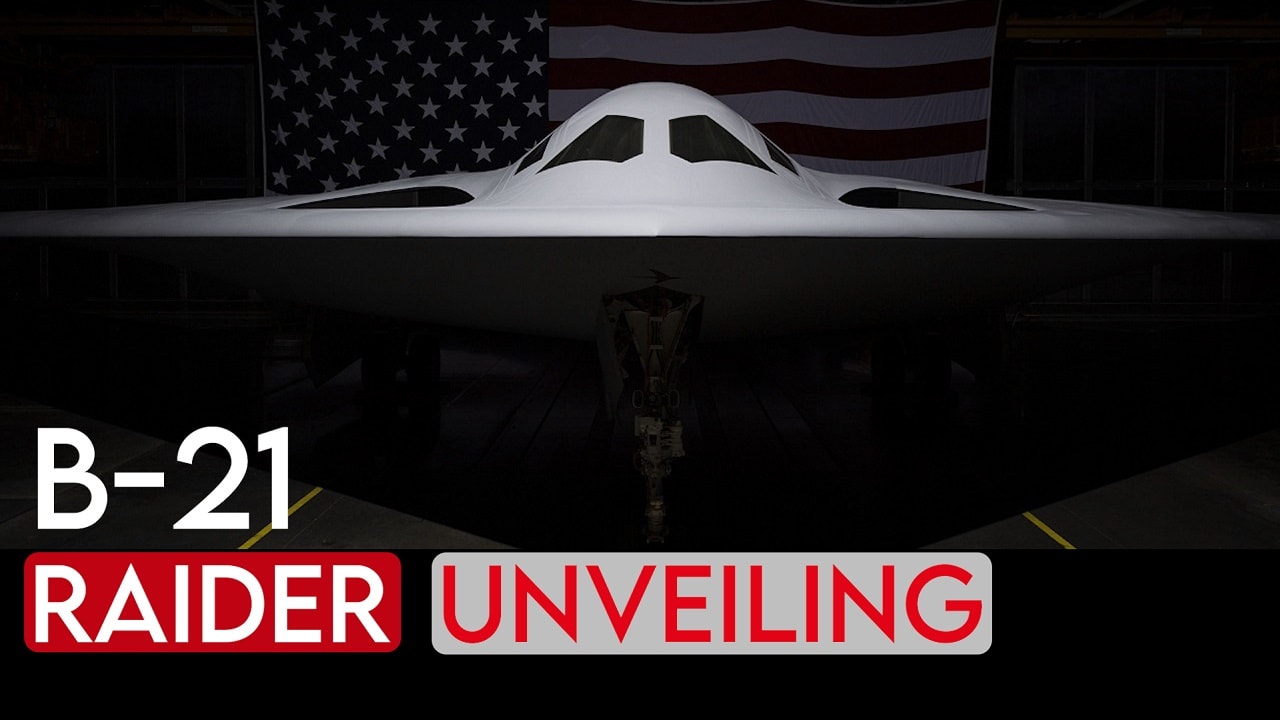 Just What Did We Actually Learn from the Air Force’s B-21 Reveal? In an exclusive ceremony at the U.S. Air Force’s Plant 42 facility near Palmdale, California last Friday, the Air Force unveiled the B-21 Raider, its first new bomber in three decades. The event began with project worker Johan Riley singing the national anthem while the Global Strike Command’s three active strategic bombers flew overhead: the iconic eight-engine B-52, the large but sleek supersonic B-1B Lancer, and finally the batwing-like B-2 Spirit stealth bomber.

Northrop-Grumman CEO Kathy Warden, Admiral Christopher Grady, and defense secretary Lloyd Austin each gave speeches. In between, a tarp was lifted to reveal a flying wing aircraft similar to but smaller than the B-2.

In truth, most of what was seen and said of the B-21 was in line with expectations established in concept art and prior official commentary.

Nor did the speakers reveal new, concrete details about incorporated technologies or performance characteristics. For more about those expectations, you can check out this prior article.

Nonetheless, some of the speakers’ rhetoric, and the physical characteristics visible at the unveiling, provide additional hints for what is effectively the 21st century’s first new bomber.

Despite the expected resemblance to the B-2 (also built by Northrop), the B-21’s reduced size and weight allowed engineers to use just two instead of four wheels per landing gear. The B-21’s peculiar windows have also received much attention. Though it seems the crew may primarily rely on external sensors for situational awareness, the backup option of the Mark 1 eyeball has been retained. Positioned as they are, the windows seem most useful, providing visibility while ‘hooking up’ with refueling tankers above. The Raider’s engine inlets are also noticeably nestled even deeper into the wing than in the B-2, better shielding their radar-reflective fan blades.

The Raider had very few visible seams or hardpoints for weapons and sensors, the protrusion of which increases radar cross-section. That suggests the B-21’s optical and radar sensors may be built into the aircraft’s skin. Such a configuration could also enable the implementation of future upgrades or equipment swaps internally without degrading the stealthy exterior geometry.

The Raider’s side and rear aspects were not shown. Concept art suggested a cleaner, more straightforward configuration than the sawtooth pattern on the B-2, which was a compromise between stealth and improved low-altitude handling.

What’s certain is that the Raider, like the B-2, will be aimed at rare “all-aspect stealth.” That is because its job is to penetrate deep into hostile airspace, its side and rear aspects must also remain low-observable to radar installations it slips past.

The Raider is painted a ghostly light grey in contrast to the B-2’s non-reflective black. This is not a choice driven by aesthetics; it hints at how the B-21 may be used differently than the B-2, which was optimized to penetrate hostile airspace at low altitudes at night.

The new Raider with a simplified tail, however, seems likely to fly at high altitudes, where a muted gray visually blends into the surrounding sky and clouds better than a stark black silhouette.

As friction-inducing air molecules are thinner at high altitudes, high flying allows airplanes to go further, faster, while beyond the reach of many short-range air-defense weapons. However, up high they’re more exposed to long-distance air defense radars and missiles. The change likely reflects greater confidence the B-21’s low observability has advanced to the point it can handle increased exposure while reaping the benefits of high-altitude operations.

What they didn’t say—unmanned capability.

One word left unuttered during the unveiling was “optionally-manned”, referring to aircraft capable of flying with or without onboard crew. Initially, optional unmanned operations were advertised as a feature, but over time the Pentagon mentioned this less and less.

The failure of speakers at the ceremony to bring it up while enumerating many other features likely means it won’t be part of the B-21’s regular operational capabilities at service entry. Likely, it has been designed with capacity to support unmanned operations but the underlying systems will only be matured into service later, if ever.

The Air Force may also need time to develop doctrine on which scenarios it would dispatch B-21s on crewless missions, balancing risks to the crew’s lives against the loss of situational awareness and reactivity onboard crew provide.

It can fly far, but also operate out of bases the B-2 can’t.

One factor contributing to very high B-2 operating costs is dependence on highly specialized facilities for maintenance, particularly removal and reapplication of radar-absorbent materials. That limited B-2s to sustainably operating from only a handful of specially prepared airbases.  Because of its lower maintenance demands, the presenters highlighted B-21s could be dispersed to attack from more locations in global conflict in addition to mounting long-distance strikes from North America. Dispersal is important as adversaries would attempt to target landed stealth bombers in a high intensity war.

Given the torturous development problems afflicting the Pentagon’s prior stealth aircraft, the Air Force and Northrop Grumman are justifiably proud to have developed the B-21 under budget, on schedule, and without drama—so far.

But while disciplined program management clearly was important, CEO Kathy Warden also emphasized the importance of new digital design tools permitting aviation engineers to tinker digitally with the design without having to very expensively iterate numerous ‘one off’ physical prototypes. That means the initial physical prototypes are built much closer to the final configuration of production aircraft, in turn allowing Northrop to build an actual production line for the prototypes that will remain useful for series production.

While it’s good those digital tools helped shepherd the B-21’s development, their potential to “usher in a new paradigm in aircraft design, development and manufacturing” as Warden put it with a “new [faster-paced] acquisition model” could improve the development of future combat aircraft across the board, particularly the Next-Generation Air Dominance (NGAD) stealth fighter being developed by the Air Force. NGAD’s missions potentially including long-distance escort of B-21s in penetrating raids.

The bomber that’s not just a bomber.

Since the 1960s, U.S. military aircraft designations use common letter codes to identify their role: B for bomber, C for Cargo, R for reconnaissance and so forth. When an aircraft is modified to perform different roles, extra letters are added—for example, the RC-135 is a cargo aircraft adapted to a reconnaissance role.

Judging by the rhetoric, the B-21 could defensibly be described designated the ERB-21, as beyond the core strategic strike mission, its “long-range sensors” (per Admiral Grady) will have an important role in long-endurance intelligence/surveillance/reconnaissance (ISR) missions, electronic warfare, and battle management of air and surface forces by helping network command-and-control links.

The Raider has also been described as the first-ever ‘sixth generation aircraft’, a debatable claim as the ‘generation’ descriptor historically has applied only to fighters, not bombers.

One message emphasized by all speakers was the B-21’s interoperability with foreign allies. Literally, that means the bomber has datalinks that can easily be adapted to transmit time-sensitive, mission critical data to allied military units and their command and control centers. Such convenient interoperability was not a feature of the F-22 Raptor.

However, there’s political messaging there too. Bombers are seen as offensive weapons, but the Raider’s most important use-cases involve coming to the defense of U.S. allies in Asia and Europe. The speakers also argued a robust B-21 force might potentially deter aggressors from using military force entirely.

The emphasis on allied integration may also encourage speculation that allies like Australia, Japan or the United Kingdom could be greenlit to procure their own B-21 forces. There are indeed indications the U.S. might extend such an offer to Australia, possibly as an alternative to nuclear-powered submarines. Whether these countries could foot the bill for even a small B-21 fleet is debatable, though.

Though there’s little question the Air Force will receive 100 B-21s, the service would like to expand that to 145 or 175 Raiders if it can—as Austin hinted, ensuring it’s built “in numbers reflecting the strategic environment ahead,” giving the U.S. an “edge that will last for decades to come.”

That was reflected in rhetoric highlighting the bomber’s “strong bipartisan support in Congress,” as well as Warden’s invocation of the 40 states producing parts for the aircraft, and promises to bring “new companies into our supplier base.”

But besides such appeals, the speakers emphasized the Raiders will be in service for long time, with capacity for frequent upgrades (“rapid technology insertions” per Warden) and support for “weapons that haven’t even been invented yet” (Austin) thanks to its open architecture systems.

Northrop has already built or is building six B-21 prototypes, the first couple of which will first undergo ground tests. If these proceed without major snags, that should lead to a first flight in 2023. Meanwhile, work will begin on integrating mission systems.

If all goes well, then the finalized design could begin production in 2025 from the same line used to build the prototypes.