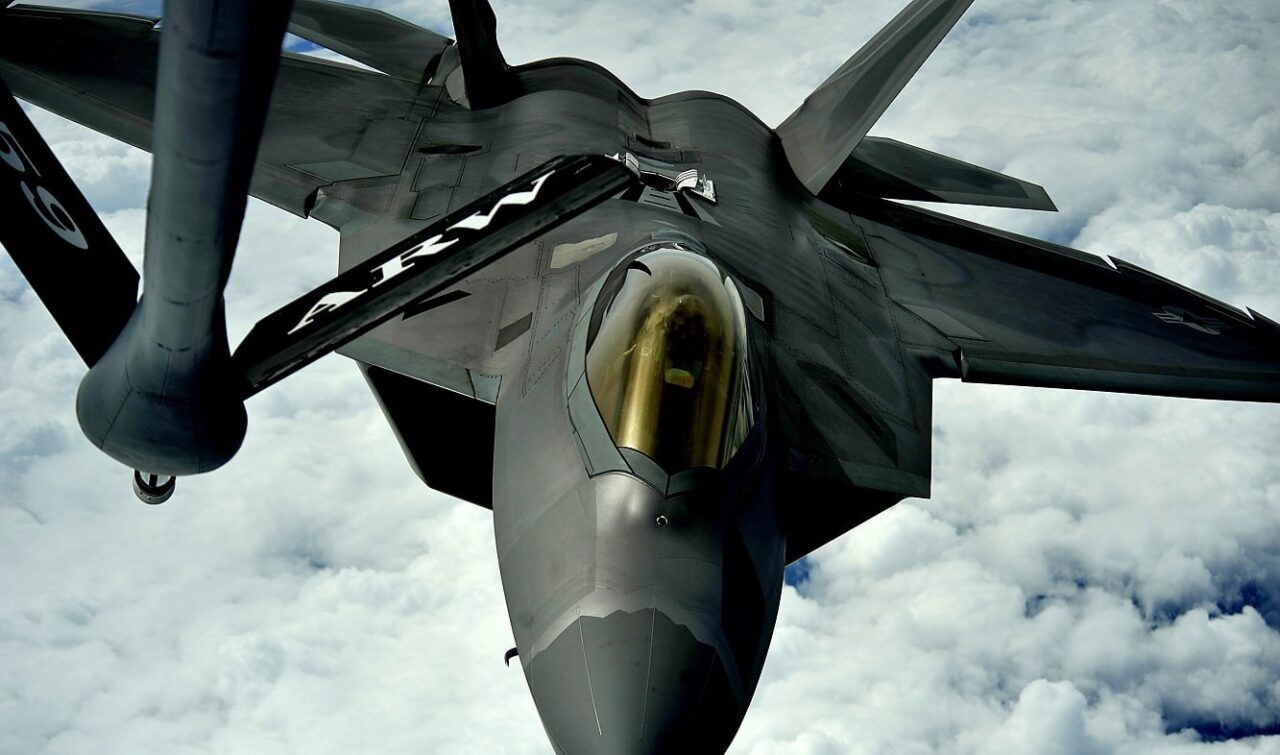 A 1st Fighter Wing's F-22 Raptor from Joint Base Langley-Eustis, Va., pulls into position to accept fuel from a KC-135 Stratotanker with the 756th Air Refueling Squadron, Joint Base Andrews Naval Air Facility, Md., off the east coast on May 10, 2012. The first Raptor assigned to the Wing arrived Jan. 7, 2005. This aircraft was allocated as a trainer, and was docked in a hanger for maintenance personnel to familiarize themselves with its complex systems. The second Raptor, designated for flying operations, arrived Jan. 18, 2005. On Dec. 15, 2005, Air Combat Command commander, along with the 1 FW commander, announced the 27th Fighter Squadron as fully operational capable to fly, fight and win with the F-22.

The F-15 Eagles Are Coming Home From Japan – The first of the United States Air Force’s F-15 Eagles bid farewell to Japan on Thursday.

Aircraft from the 18th Wing departed from Kadena Air Base, Japan, marking the first of the Eagles to fly out as part of a phased withdrawal from the base. The number of aircraft departing was not disclosed, but photos showed eight Eagles preparing for a final takeoff.

Those jets will initially travel to Kingsley Field Air National Guard Base, Oregon – and afterward, some will continue service at various ANG units across the U.S.

In contrast, others will go to the 309th Aerospace Maintenance and Regeneration Group for storage. Also known as the “Boneyard,” the facility is located outside of Tucson, Arizona.

“This is the beginning of a significant journey for the 18th Wing,” said Brig. Gen. David S. Eaglin, 18th Wing commander. “This is going to take us from where we are today to a better place in the future where we will have modernized fighters here at Kadena to better protect our allies and ensure a free and open Indo-Pacific.”

According to the Air Force, the 18th Wing, originally known as the 18th Tactical Fighter Wing, received its first F-15C on Sept. 29, 1979, while the 67th Tactical Fighter Squadron – “The Fighting Cocks” – was the first squadron to become fully operational with the Eagle within the Pacific Air Forces.

The Air Force has begun retiring the aging fleet of F-15C/D Eagles that have been in service for more than four decades, citing reliability and maintenance issues with the old warbirds.

“While I’m sad to see the F-15 go, it’s important to maintain an advanced fighter presence here in Okinawa,” Eaglin added. “Our adversaries have advanced and progressed since 1979 and we must do the same. I look forward to the future as we work through the challenges of divesting an airframe that served admirably as we modernize our defenses and evolve to the threats we face today.”

When the last Eagle flies out of Kadena, which will likely take place in the New Year; it will have marked more than 40 years of continuous service while stationed on Okinawa. Eaglin has credited the venerable fighter and the men and women who kept it flying for a sterling legacy of air superiority.

“I think the peace and stability of the region is one of the greatest accomplishments of the F-15 here, and the men and women who fly, maintain and support them are what made that happen,” said Eaglin. “With an unmatched record of 104 kills to zero losses in air-to-air combat since it’s been here, we’ve had a long history of deterrence and reassurance by our presence, which will endure as we modernize.”

The United States Department of Defense (DoD) will continue to maintain a steady-state fighter presence at Kadena by temporarily deploying newer and more advanced aircraft – including the F-22 Raptor – while it is determined what will be the permanent long-term replacement.

Some lawmakers have expressed concerns that the reduction of aircraft could leave U.S. forces stretched thin in the region.

The Arrival of the F-22 Raptors

The first aircraft to backfill the leaving F-15s arrived on 4 November, when four 525th Fighter Squadron Bulldogs F-22A Raptors landed at the base.

As previously reported, there have even been calls from some in Washington to more permanently deploy a number of fifth-generation Raptors to Japan that had been scheduled for retirement. The argument is that those aircraft could be upgraded instead of sent to the boneyard – and could serve as a serious deterrent to China.

In fact, the F-22 was initially expected to replace the F-15 starting in the mid-2000s – but production of the Raptor was halted in 2010, with less than half the planned aircraft entering service.