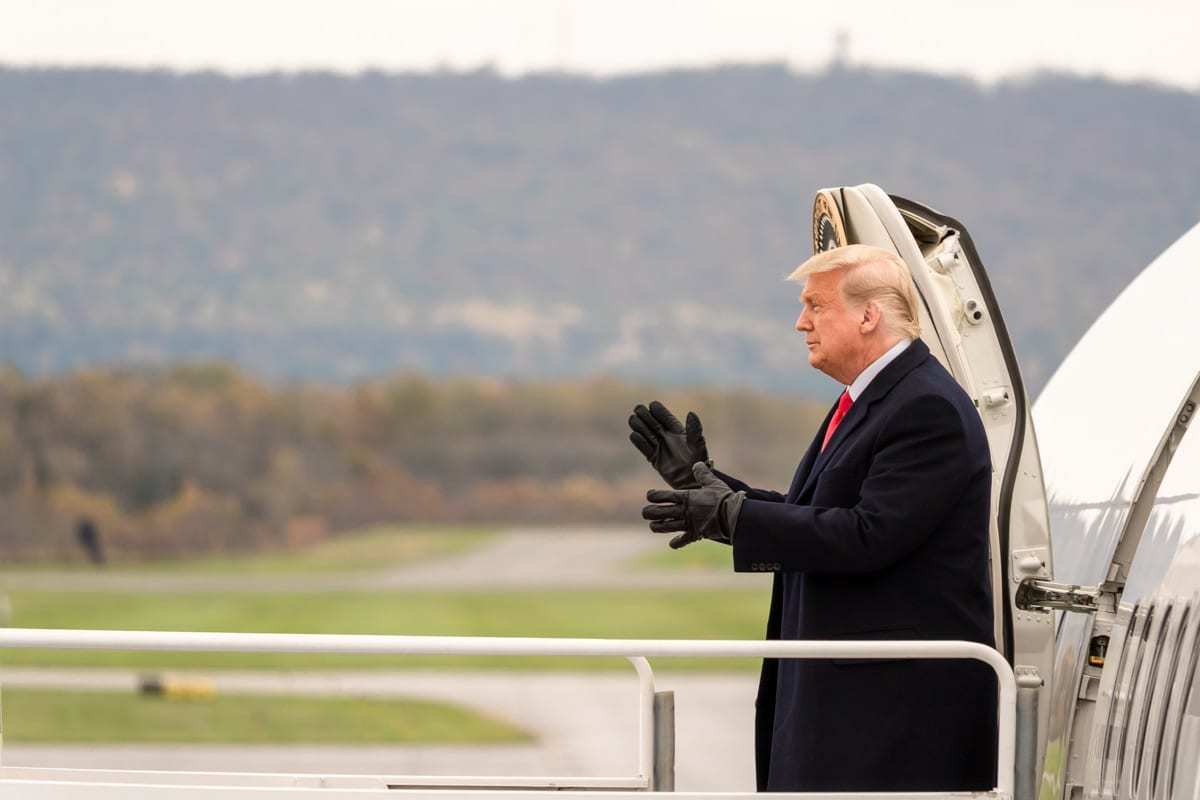 President Donald J. Trump applauds the crowd and gestures with a fist pump as he disembarks Air Force One Saturday, Oct. 31, 2020, upon his arrival to Reading Regional Airport in Reading, Pa., the second of President Trump’s 4 stops in Pennsylvania. (Official White House Photo by Shealah Craighead).

Donald Trump’s crusade to manufacture doubts about the outcome of the presidential election reached a new low on Thursday, when the president shifted from making vague, evidence‐​free assertions of massive and systematic vote fraud to promoting a specific and frankly bonkers conspiracy theory—disseminated in ALL CAPS to the president’s 89 million Twitter followers—alleging that software developed by Dominion Voting Systems had “DELETED 2.7 MILLION TRUMP VOTES NATIONWIDE” and that “221,000 PENNSYLVANIA VOTES” had been “SWITCHED FROM PRESIDENT TRUMP TO BIDEN.”

This is embarrassing nonsense of the sort one expects to see on fringe message boards, not emanating from the White House. Its roots, as The New York Times explains in a detailed debunking, appear to lie in a handful of election‐​night tabulation errors in Michigan and Georgia, some of which occurred in counties using Dominion software. Those mistakes were rapidly identified and corrected, and ultimately found to be the result of human error, not defects in the software itself. Yet that was enough to launch a flurry of speculation about digital chicanery by online conspiracy theorists, which has now apparently made its way to the White House. Trump’s claim was even echoed on Fox News by law professor Jonathan Turley, prompting an on‐​air fact check by host Steve Doocy. A variety of purported links between Dominion and Democrats, which began circulating in an effort to bolster the theory, have similarly been refuted by the Associated Press. Meanwhile, a joint statement from (among others) the heads of the Department of Homeland Security’s CyberSecurity Infrastructure Agency and the National Association of State Election Directors, presumably better situated to assess this sort of thing than random theorists on the Internet, reported “no evidence that any voting system deleted or lost votes, changed votes, or was in any way compromised.”

One reason this is not a particularly good conspiracy theory—beyond the reasons the Times and the AP lay out and the CSIA assessment—is that Pennsylvania recently required all its voting machines to use or generate voter‐​verifiable paper records, which can be used for both the state’s routine audits of electronic tallies and, if necessary, a full manual recount. That makes it vanishingly unlikely an electronic vote‐​rigging scheme on the scale Trump alleges—with tens or hundreds of thousands of votes changed—could succeed. An attempt to modify so many paper records would inevitably be detected by voters on election day. If the paper records were accurate but the digital count interfered with, the errors would need to either be distributed across so many machines that it would be detected in routine statistical audits, or generate such enormous anomalies on a small number of machines that they would send up unmistakable signal flares demanding scrutiny. It would, in short, be a scheme so manifestly doomed to failure and so guaranteed to be detected that nobody sophisticated enough to attempt it could regard it as a viable strategy.

It should go without saying that disseminating spurious accusations of vote fraud without evidence is in itself a civic harm: To the extent such stuff is believed, it encourages either helpless resignation from political engagement or desperate resort to extralegal action. But in this instance there’s an added harm of undermining the serious and vital efforts of legitimate security researchers to identify potential vulnerabilities in electronic voting systems and address or mitigate them. Crying wolf about imaginary cyberattacks makes it more likely that the public and elected officials will tune‐​out when real vulnerabilities are identified. And ignoring all the hard work undertaken in many states to secure voting systems muddies public perception of how well different states’ political institutions have performed on this front. If voters are fooled by such claims, they may believe it’s necessary to squander resources hardening election infrastructure that is already secure, or to replace software or public officials who have in fact performed well. States that have done less adequate work securing their voting systems, meanwhile, may get an unearned reprieve from the perception that problems lie elsewhere.

When the President of the United States irresponsibly amplifies unfounded conspiracy theories, the stature of his office guarantees that many citizens will, at least initially, give these claims a weight they do not merit. That’s corrosive of democracy and civic trust, but also, in this case, of good cybersecurity policy.

Julian Sanchez is a senior fellow at the Cato Institute (where this first appeared) and studies issues at the busy intersection of technology, privacy, and civil liberties, with a particular focus on national security and intelligence surveillance.