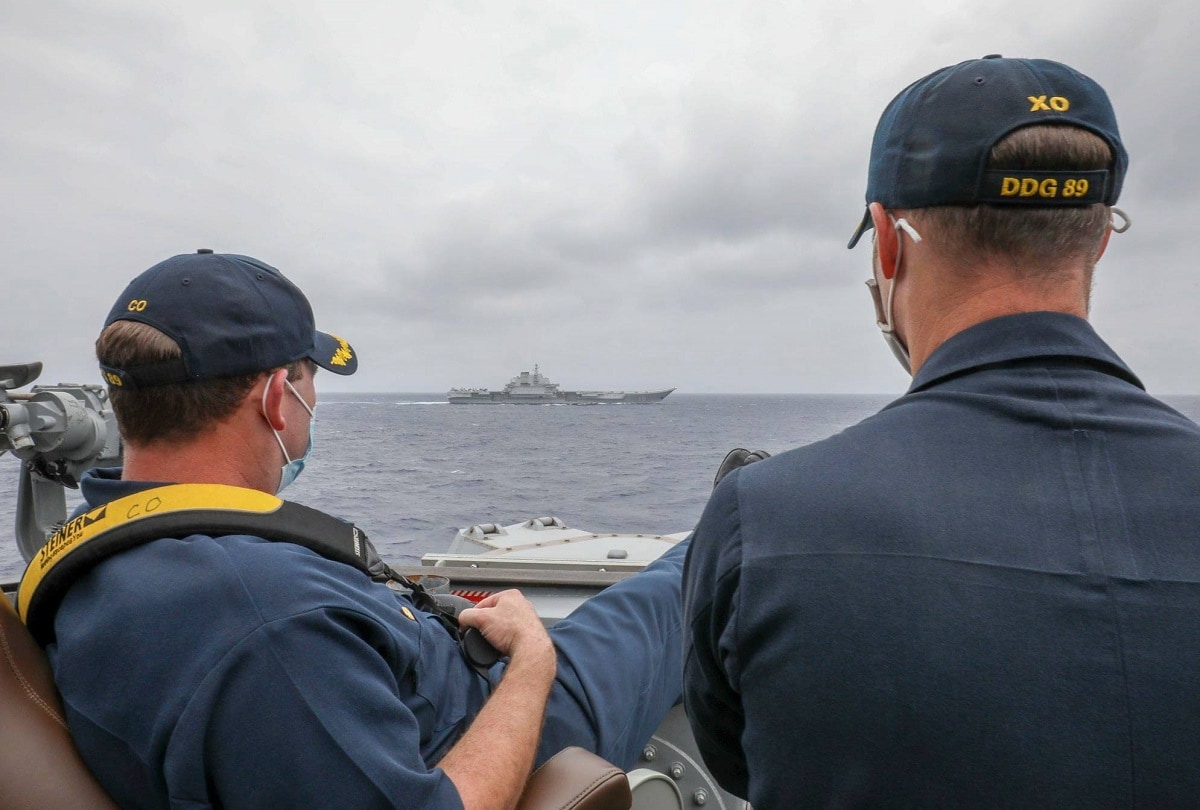 Over at the South China Morning Post, reporter Minnie Chan has the story of how the U.S. Navy destroyer Mustin shadowed the Chinese aircraft carrier Liaoning in the South China Sea last month. Mustin’s exploits prompted much gnashing of teeth and rending of garments in China. The tabloid Global Times complained that the tin can was “stalking” the Chinese flattop and “risking an accident.”

But safe navigation isn’t the real gripe here. Global Times is wroth about the photo (see above) that accompanied the story. The photo depicts Mustin skipper Commander Robert J. Briggs and his executive officer keeping an eye on Liaoning from the destroyer’s bridge wing while on a parallel course several thousand yards away. That’s a perfectly safe distance, by the way. So much for risking an accident.

And stalking? Sure. Navies stalk one another all the time, as even a casual perusal of Cold War history shows. U.S. task-force commanders reportedly used to assign Soviet AGIs, or trawlers packed with intelligence-gathering hardware, a station in their formations so everyone could maneuver without fear of collision. Nowadays PLA ships and planes stalk foreign ships and planes in the China seas as a matter of routine and sometimes really do risk—or even cause—an accident.

What really stoked ire in l’affaire Mustin, it seems, was the casual attitude Briggs struck toward a jewel in the crown of the PLA Navy fleet and a bearer of “China’s dream,” Xi Jinping’s grandiose project for rejuvenating the nation following its long “century of humiliation” at the hands of seaborne conquerors. Meh, the Mustin officers seem to say. Briggs is seated in the skipper’s chair; he has his feet up and appears utterly unconcerned by the nearby carrier.

Chan quotes Lu Li-shih, a former instructor at the Taiwan Naval Academy in Kaohsiung: “In the photo, Commander Briggs looks very relaxed with his feet up watching the Liaoning ship just a few thousand yards away, while his deputy is also sitting beside him, showing they take their PLA counterparts lightly.” Lu’s verdict: “This staged photograph is definitely ‘cognitive warfare’ to show the U.S. doesn’t regard the PLA as an immediate threat.”

Or as the Bard might put it, the American crew showed slight regard for China’s navy.

Apparently, Washington didn’t get the memo that cognitive warfare is something China does. Beijing makes a practice of using naval and military implements to overawe outmatched neighbors such as the Philippines and Vietnam. It wages what Chinese officialdom calls “three warfares” against opponents on a 24/7/365 basis, executing legal, media, and yes, psychological operations to shape opinion in the Chinese Communist Party’s favor. The narrative: China is big, bad, and unbeatable.

A ship on a routine errand accompanied by a simple photograph helps give the lie to China’s narrative—and deface the image of itself Beijing has so artfully painted in recent years. Trolling is an underappreciated part of great-power strategic competition at sea. The U.S. Navy needs to do it more. Seize the initiative.