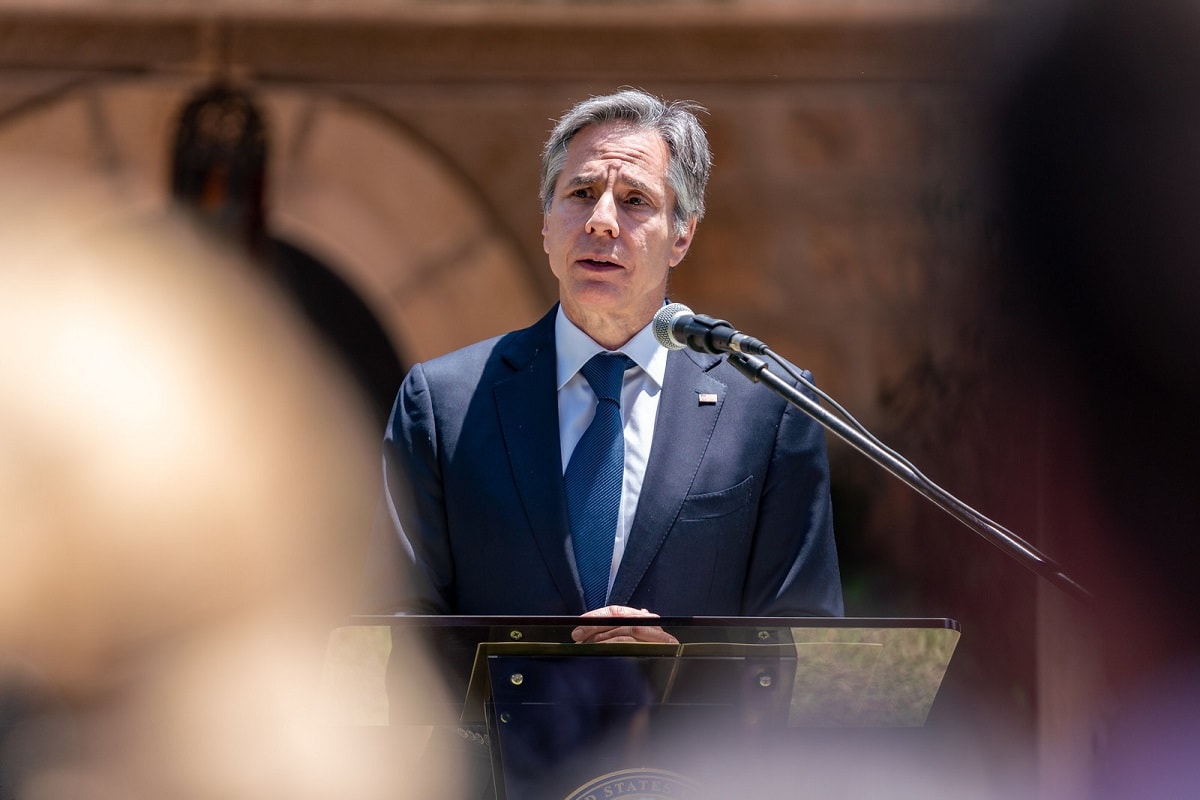 Secretary of State Antony J. Blinken meets with staff from U.S. Embassy Jerusalem and the Palestinian Affairs Unit, in Jerusalem on May 25, 2021. [State Department photo by Ron Przysucha/ Public Domain]

Somaliland held its seventh elections in 30 years yesterday. More than one million citizens registered to vote, a process that, for the second time in three years, included processing for biometric iris scans in order to secure the process.  Nearly 800 candidates are seeking seats on local councils or in parliament.  There are 2,709 polling stations, a 61 percent increase from the previous elections in 2017. More than 30,000 people staffed the polls or worked to ensure election integrity. Somaliland gave free rein to international election observers. Photos from not only the capital Hargeisa and major port Berbera, but also peripheral towns like Tuqarak show heavy turnout. Even though Somaliland is one of the poorest nations on earth and has a budget of only $339 million, it shouldered 70 percent of the $21.8 million cost of the polls, with the remainder picked up by the United Kingdom, European Union, Sweden, and Taiwan.

Ten European ambassadors and a European Union ambassador came to Hargeisa to show support and see the elections. No American diplomat bothered to show up, however, to celebrate democracy in one of Africa’s most peaceful and western-leaning albeit unrecognized states. Even this, however, requires an asterisk. Somaliland, a former British protectorate, gained independence in 1960 and received recognition from all five members of the UN Security Council and 30 other states. It voluntarily entered a union with Italian Somaliland to form what would become Somalia. It was an unhappy union. Somali dictator Siad Barre pursued genocide against the Isaaq clan and destroyed 80 percent of Hargeisa. After Somalia collapsed into state failure, Somaliland reasserted its independence. While no country resumed recognition, Somaliland bypassed the fighting, chaos, corruption, terrorism, and looting which long paralyzed the rest of Somalia.

The irony is that the State Department and broader international community has poured hundreds of millions of dollars into Somalia in order to hold the sort of one-person, one-vote elections that Somaliland now holds regularly at a fraction of the expense. Most recently, Somalia President Mohamed Farmajo sought to retain power while postponing those elections for two years, nearly bringing Somalia back to civil war. When, on May 27, 2021, after squandering so much money for elections that did not happen, Somali leaders agreed to hold a selection in which a few hundred clan elders would select a new government, the State Department tweeted its applause. Fully democratic elections in Somaliland, though? Crickets from Foggy Bottom.

Perhaps the State Department feels that to recognize democracy in Somaliland or to set foot in the region would somehow imbue it with formal recognition. This is nonsense. American officials have long visited Taiwan, and U.S. diplomats have traveled to Iraqi Kurdistan for decades and Syrian Kurdistan for years without implying recognition. European diplomats and African officials—including the former president of Sierra Leone—visit without implying any such claim. While U.S. Ambassador Donald Yamamoto has largely stopped his staff from visiting Somaliland, his predecessors imposed no such restrictions. Rather, the issue comes down to neglect and disinterest and perhaps Yamamoto’s own hostility, something about which many other diplomats stationed in Somalia now comment.

Regardless, Freedom House has described “democracy in retreat” and “democracy under siege.” Somaliland is a happy exception, which the State Department should uphold as an example for Somalia proper and countries across the Horn of Africa like Ethiopia and Eritrea where democracy is in short supply. Unfortunately, the State Department’s failure to send any diplomat to witness the event shows once again that, when it comes to Africa, the United States is absent without leave.