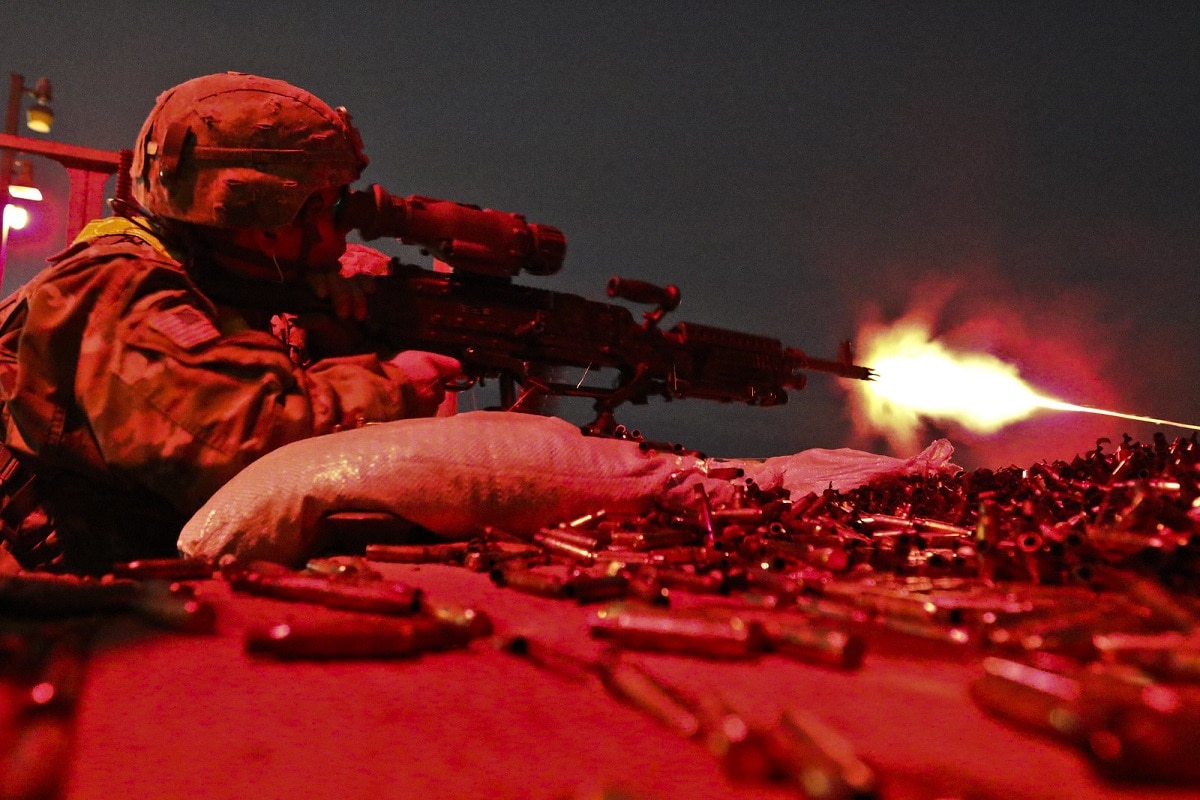 On 11 September 2019, on the eighteenth anniversary of the event that started what would become known as “The Global War on Terror (GWOT),” I flew in an Air Force reconnaissance aircraft over eastern Afghanistan in what would be my only personal contact with that nation and scene of the latest failure in American strategic policy. After taking off from a base in the region, we flew north across the Arabian Gulf and once “feet wet” over Pakistan, up “the avenue” – that air space to the east of Iran so well known to aviators over the last twenty years – and further north into Afghanistan. It was a beautiful day for flying and this being the occasion of my fifteenth wedding anniversary, my thoughts naturally turned to my wife and family back in New Jersey.

Once we got into that nation and began our patrol to the east of Kabul, what struck me was the beauty of the terrain in Afghanistan. Being a military professional well attuned to “an eye for the terrain,” the mountain peaks of eastern Afghanistan were something to behold. It reminded me of something from our own Rocky Mountains of the western United States. 15,000-foot peaks with deep valleys and on some of those peaks, beautiful clear blue lakes. My thought on seeing this was – “this was some absolutely beautiful and prime real estate.  Too bad it’s in Afghanistan!”   Looking down on that terrain and especially with the limited number of roads running through it, it was easy to see why this was a tribal nation living valley to valley much as they had for centuries. I thought — how could we possibly have an impact here?

It was on this same deployment during the summer of 2019 that I purchased on my Kindle Max Hastings’s then-latest work, Vietnam: An Epic Tragedy, 1945-1975. I had been a fan of Hastings’ authorship since reading his Armageddon: The Battle for Germany 1944–45 several years before along with several others in his prodigious catalog. What struck me about Hastings’s narrative on Vietnam was how well it paralleled what was then happening in Doha, Qatar at the time — how the U.S. was negotiating an end to its conflict in Afghanistan directly with the Taliban while keeping our clients, the Afghan government, out of those negotiations. As Hastings’s work-related so well, the “playbook” by which Henry Kissinger and the Nixon administration negotiated us out of the war in Southeast Asia with the North Vietnamese – and keeping our South Vietnamese clients out of it – was well established.  Our country, despite its aversion to the legacy of Vietnam and all of the foreign and domestic churn that the era engendered, was headed down the same road again. It also struck me that our “Saigon 1975” moment with the Huey perched on a rooftop picking up evacuees…was fast coming. After reading the book, I firmly believed that it took an Englishman to write a clear-eyed and objective narrative of that conflict, as American emotions still remain raw some 45 years after the fact.

As a historian, I often hear the cliché that “history repeats itself.” This is not necessarily true. While circumstances in history are often similar, how we react to those at the moment is not preordained to be the same. If we have a deep knowledge of history, we can learn how others have gone before us and how well they navigated the circumstances of their times. The history is often already there – the current generation needs to make time to read and understand it. It is in our true and deeper understanding where we fail.

For the most part, and perhaps it is human nature, people do not have a deep knowledge of history or its impacts. Unfortunately, those wielding the highest positions of power in our nation often do not have a deeper grasp of the world and its history. Politicians, by their very nature, look at circumstances in terms of short-term gain rather than a broader more nuanced view of the world.  Unfortunately, our fourth estate, our national media, similarly lacks that depth as well, content with a litany of “sound bites” that hides true meaning and understanding.

A case in point. Early in the first decade of the wars in both Afghanistan and Iraq, any questioning of our motives within political circles for keeping our military so deeply involved in those morasses was met with such vapid justifications as “You/we need to support the troops!”  Why is it that we could never move beyond such simple-minded augments and rhetoric in our political process which we self-profess to be of the “greatest deliberative body in the world?”  One of the greatest ironies is that those speaking most loudly about “supporting our troops” were those who most advocated keeping them in harm’s way – to bear wounds both physical and mental or to be killed. Wounds and death from which these elites remained largely unaffected.

And so it is with our nation today and our present circumstances. As news of the imminent fall of Kabul took place on 13 August 2021 and the sending of U.S. Marine and Army battalions back to the Afghan capital to evacuate American lives and Afghan clients, CNN reporter, Peter Bergen, wrote an article titled, “Biden deserves blame for the debacle in Afghanistan.” Normally, I have found the writings of this reporter, in particular, to be solid, but in this case, I could not disagree more.  I have to respect President Joe Biden and his decision and that of President Donald Trump in beginning to take tangible steps toward putting our nation on the path to ending this conflict that did nothing for us but cost us more blood and treasure. My greatest criticism of our government and policymakers is why it took so long to see this and to take action on it.

If we are to have anything close to a full reckoning with the disaster that is Afghanistan, we have to step back far beyond that of our present administration. We should first look to our actions that made the circumstances right for the Taliban to come to power there in the first place. In that, we have ourselves to blame. In our zest to go after our rivals of the Cold War, the Soviet Union, after their invasion of Afghanistan in 1979, our support for the Mujahedeen gave birth to the movement that attacked us in 2001. While George Crile’s Charlie Wilson’s War remains an entertaining book and movie as to how U.S. support for the Mujahedeen in the early 1980s came about, it should provide us a cautionary tale in how our short-sighted actions today can lead to worse, new and unforeseen problems, tomorrow.

Additionally, and as we approach the twentieth anniversary of 9/11, we should take stock of where we have come in the last twenty years. In the aftermath of that event, the U.S. had a wealth of support among the international community. What is amazing to consider is how fast we whittled that support away through our ultimately misguided actions in both Afghanistan and Iraq.  In the months after 9/11, loud voices in American public opinion became one of “we have to do something to someone.” While there was justification for the initial invasion of Afghanistan in 2001, the objective of eliminating the Taliban as a threat had been eliminated within months of the start of U.S. military action. In truth, we should have left after the defeat of the Taliban and turned the country over to the Northern Alliance in December 2001 or shortly thereafter. Unfortunately for our nation, our national leaders of both major political parties either had no intention of leaving (maintaining an open-ended presence) or were content to let the conflict roll without result “hoping” for circumstances conducive to a political exit — circumstances that never came.

In offering the nation an emotional and military response following 9/11, President George W. Bush and his neoconservative allies were glad to oblige. The latter in particular with their view of an aggressive interventionist American foreign policy in the Middle East toward securing resources, peer-nation competition, and greater living space for Israel, led us into these wars of the last twenty years. All of this is nothing new and is well covered in James Mann’s Rise of the Vulcans: The History of Bush’s War Cabinet. Unfortunately, former members and advisors of the Bush administration…and senior military leaders who SHOULD have known better but who quietly obeyed…will never be truly called to account for the disasters we find ourselves in today. Similarly unfortunate for our nation, these individuals continue to wield power and influence in the direction of our country and its affairs in its senior echelons today.

When that longer view of this era in history is written, 2003, prior to the U.S. stepping across the border into Iraq, was the high point of “Pax Americana.”  What is telling is that, unlike the purported “Pax Romana” from the 1st Century AD or “Pax Britannica” from the late 19th and early 20th Centuries, is that our period of peace lasted little more than a decade, from the end of the Cold War in 1990 to 2001. Hubris and arrogance all played a part in the fleeting quality of our peace…emotion, and agendas. For the broken and torn lives of those who, in good faith, were entrusted with carrying out American policies on the ground in Afghanistan and Iraq, these results sting. The worst fate for a military person is to be asked to sacrifice without purpose and it is hard to look at the circumstances in both Afghanistan and Iraq in anything but those terms…not unlike a previous generation of veterans of the Vietnam War. Until we as a nation develop clear-eyed policies and especially those involving the use of military force, we will be doomed to repeat the mistakes of the past.

Unfortunately, for being such an educated nation, our track record of learning from the past is not a good one.

Stuart R. Lockhart is a retired US Marine Corps infantry officer and historian with the US Air Force.  These comments represent his own opinions and are not affiliated with the DOD, USMC, or USAF.

Stuart R. Lockhart is a retired US Marine Corp infantry officer and historian with the US Air Force.  These comments represent his own opinions and are not affiliated with the DOD, USMC, or USAF.