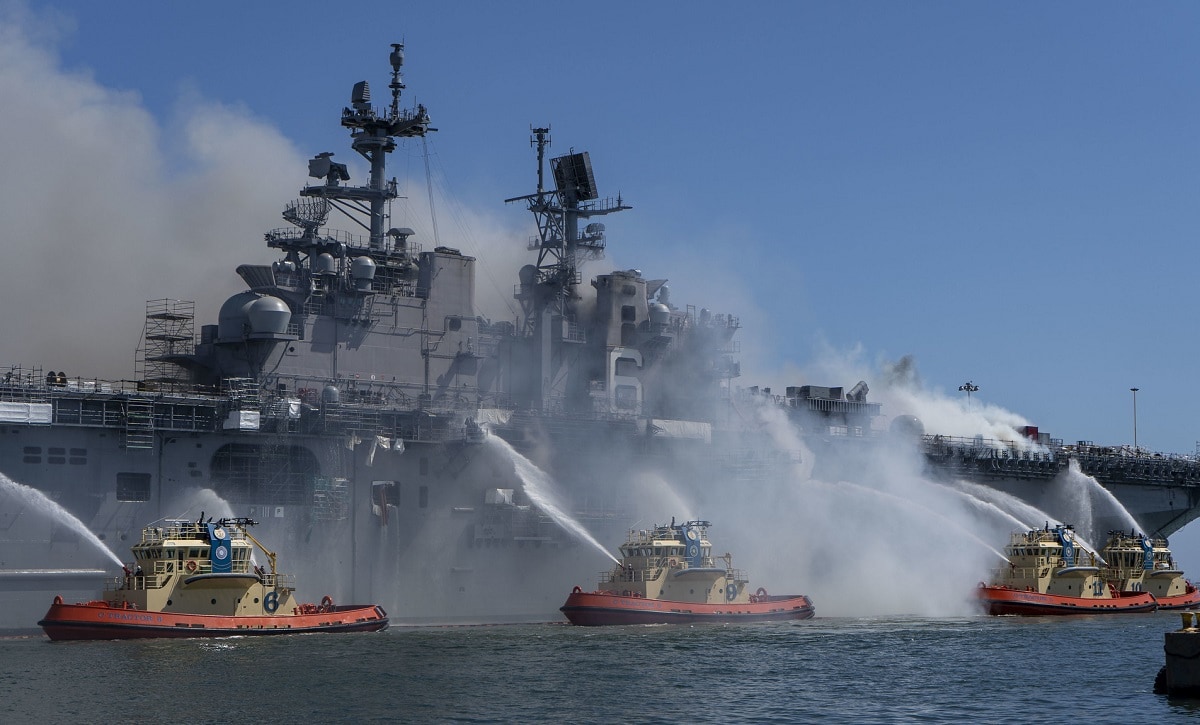 SAN DIEGO (July 12,2020) Sailors and Federal Firefighters combat a fire onboard the amphibious assault ship USS Bonhomme Richard (LHD 6) at Naval Base San Diego, July 12. On the morning of July 12, a fire was called away aboard the ship while it was moored pierside at Naval Base San Diego. Local, base and shipboard firefighters responded to the fire. Bonhomme Richard is going through a maintenance availability, which began in 2018. (U.S. Navy photo by Mass Communication Specialist 3rd Class Christina Ross/Released)200712-N-BL599-1081

A US Navy amphibious assault ship was destroyed by fire last summer, and a Navy damage control officer told investigators there were indications that someone may have tampered with the onboard firefighting equipment beforehand that could have helped first-responders rapidly put out the fire, an unsealed affidavit revealed.

A fire broke out aboard the USS Bonhomme Richard on July 12, 2020, and it quickly spread through the ship. The ship burned for days, around 70 people were injured, leaving the hull so severely damaged that the Navy decided to scrap it rather than go through with repairs.

In the aftermath of the devastating fire, which is believed to have started in the lower vehicle storage area, investigators found evidence of arson, as well as possible indications that someone may have “purposely tampered with” the ship’s firefighting equipment, according to an affidavit in support of a search warrant filed in September but unsealed Tuesday.

On July 22, 2020, investigators from the Naval Criminal Investigative Service and Bureau of Alcohol, Tobacco, Firearms, and Explosives did a walkthrough of the upper and lower vehicle storage compartments with Lt. Cmdr. Felix Perez, the damage control assistant responsible for the ship’s firefighting systems.

The stations had hoses that were disconnected or connected improperly, and in one case, a hose was discovered cut during the initial firefighting efforts on the ship. Fire stations are normally stowed in a ready condition so a crewmember can very quickly remove a hose and spray water onto a blaze.

The affidavit said that Perez, who had inspected the areas two days prior to the fire, explained that “while it was possible one station could have been overlooked, it was, in his opinion, nearly impossible for three of the four closest to and inside the Lower V to have been missed by damage control personnel.”

The damage control officer “opined that three of the four fire stations aboard the [Bonhomme Richard] appeared to be have been purposely tampered with and/or disconnected.”

The affidavit did not specifically state that this was the case, noting only that it was additional evidence of arson along with several bottles of a “heavy petroleum distillate” in the area where the fire is suspected to have started.

On July 29, the US Navy brought charges against a sailor who served aboard the Bonhomme Richard in connection with the fire. Ryan Mays is being charged with aggravated arson and hazarding a vessel, according to multiple reports.

The newly unsealed affidavit states that Mays, who is said to have been assigned to the USS Bonhomme Richard after dropping out of Navy SEAL training and has been described as “a person who showed disdain towards authority and the Navy,” was identified as a suspect by witnesses.

Gary Barthel, the California-based military lawyer who is representing Mays, told The San Diego Union-Tribune that his client adamantly “denies any involvement with the starting of the fire.”