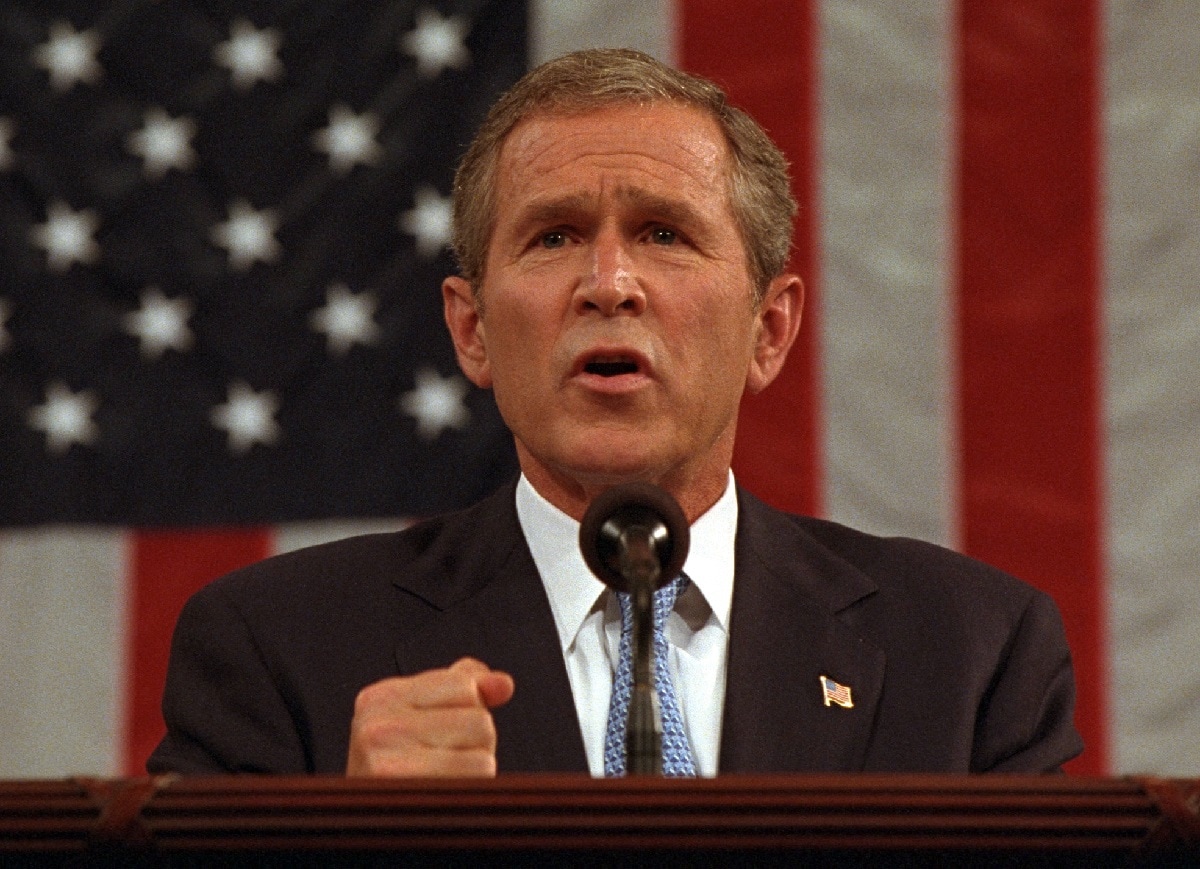 President George W. Bush delivers an address regarding the September 11 terrorist attacks on the United States to a joint session of Congress Thursday, Sept. 20, 2001, at the U.S. Capitol. Photo by Eric Draper, Courtesy of the George W. Bush Presidential Library

Anyone who witnessed the horrors of the 9/11 attacks recalls the wrenching grief and anger that gripped the American people. The collective desire for revenge was entirely understandable.  However, the response that George W. Bush’s administration and its successors adopted inflicted serious, perhaps irreparable, damage on America’s position in the world and on domestic civil liberties. That damage is still accumulating and will continue to do so until the American people insist on a more restrained U.S. foreign policy and take steps to rein in the toxic national security state that has mushroomed in the two decades since 9-11. If those changes are not made, Osama Bin Laden will have achieved his perverse goals in launching the attacks.

Washington’s post-9/11 foreign policy blunders have become legendary. Launching an ill-defined, open-ended “war on terror” hopelessly entangled the United States in the complex, murky, and violent politics of the Muslim world. The perils became apparent not long after U.S. troops invaded Afghanistan to root out Al Qaeda and punish the Taliban regime for harboring the terrorist group.  Washington’s action was justified and achievable. However, it was not long before that limited, punitive mission morphed into an utterly impractical counter-insurgency, nation-building crusade.  Two decades later, Joe Biden’s administration finally accepted a humiliating end to that quixotic venture—after more than 2,400 American deaths and some $2 trillion in wasted taxpayer dollars.

Afghanistan, though, was merely the beginning of America’s self-destructive obsession with the war on terror. The decision to invade and occupy Iraq accelerated America’s descent into the Muslim world’s geopolitical quicksand. Washington attacked a secular regime that had nothing whatever to do with 9-11, despite cynical propaganda to the contrary by the administration and its media allies. U.S. forces easily ousted Saddam Hussein from power, but the regime-change war badly destabilized Iraq and the surrounding region. Ironically, the principal result was to strengthen radical Islamist factions, a development that ultimately produced ISIS and the sizable caliphate that it was able to establish temporarily over major portions of Iraq and Syria.

Confirming that it had learned nothing from the Iraq War and its aftermath, Barack Obama’s administration waged its own forcible regime-change campaigns in Libya and Syria.  Once again, Washington focused on ousting secular dictators while remaining oblivious to the reality that the principal beneficiaries would be Islamist elements.  The administration succeeded in helping insurgents remove Libya’s Muammar Qaddafi, but the outcome has been a decade of chaos characterized by fighting among multiple factions, a massive refugee flow, and the spectacle of seeing slave markets return to Libya.  Washington’s regime-change crusade against Syria’s Bashar al-Assad has not succeeded, largely because Russia, the Assad family’s longtime patron, intervened with its own forces in 2015.  The main “achievement” of Washington’s intervention has been to produce a sectarian bloodbath marked by an even larger flight of refugees than in Libya and to bring U.S. and Russian military forces into dangerous, hostile proximity to each other.

Washington’s war on terror has cost some $8 trillion dollars and some 7,000 American lives, as well as thousands more maimed mentally or physically. The only significant beneficiaries appear to be U.S. defense contractors and Washington’s global rivals, especially China, who likely watched in disbelief as America wasted vast amounts of blood and treasure.

As bad as the overseas consequences of post-9-11 U.S. policies have been, though, some of the domestic effects are proving to be even worse. Self-censorship was all too evident following the horrific event.  No one wanted to be seen as “soft on terrorism,” or even worse, a “terrorist sympathizer.”  That herd mentality played out in knee-jerk support throughout the public, Congress, and the news media for Washington’s anti-terrorism policies—an attitude that did not weaken until the aftermath of the Iraq War became an undeniable fiasco.

The lopsided congressional votes in October 2001 for the Providing Appropriate Tools Required to Intercept and Obstruct Terrorism (P.A.T.R.I.O.T. or Patriot) Act, which unleashed the FBI and the intelligence agencies to conduct unprecedented levels of surveillance of the American people confirmed the extent of public fear.  Those votes also reflected the degree of myopic public unity in favor of measures granting vast new powers to the FBI and the intelligence agencies.  The far-reaching, ominous legislation passed the House 357-66 and the Senate 98-1—with Russ Feingold (D-WI) casting the lone dissenting vote in the upper chamber.

A New York Times article captured the panicky environment in which Congress enacted that legislation.  “Passage of the bill . . . was the climax of a remarkable 18-hour period in which both the House and the Senate adopted complex, far-reaching antiterrorism legislation with little debate in an atmosphere of edgy alarm, as federal law enforcement officials warned that another attack could be imminent.  Many lawmakers said it had been impossible to truly debate, or even read, the legislation that passed today.”

That legislation and the mentality it fostered have led to a multitude of worrisome abuses over the next two decades.  The Bush administration authorized the torture of prisoners at Guantanamo and various CIA “black sites” around the world.  Administration officials asserted the right to hold even American citizens suspected of torture indefinitely without formal charges, despite the habeas corpus provision in the U.S. Constitution.  In response to the suit brought by Jose Padilla, the Supreme Court did not give authorities the blank check they sought, but the restraints were far from definitive.

Barack Obama managed to exceed even Bush in his outrageous assertions of arbitrary executive power.  Although the Bush administration asserted the right to hold U.S. citizens suspects without trial if they were terrorist suspects, Obama asserted the right to execute them without trial.  He then proceeded to do so, ordering a drone strike against radical Islamist cleric Anwar al-Awlaki.  Worse, he subsequently used a drone strike against Awlaki’s 16-year-old son, even though there was no firm evidence that he was involved in terrorist activities.

The willingness of law enforcement and intelligence agencies to engage in contemptuous behavior toward fundamental constitutional liberties has worsened throughout the two decades since 9/11.  The Bush, Obama, and Trump administrations all spied on and harassed journalists who dared look into government practices that were ethically and often legally dubious. A pervasive surveillance state has emerged, despite assurances from officials such as CIA director John Brennan and National Security Agency director James Clapper that the agencies were not routinely collecting data on American citizens. Their willingness to brazenly lie about such practices is not comforting now that Joe Biden’s administration has authorized an enhanced investigative campaign against vaguely defined “domestic terrorists.”

The wounds that the 9-11 attacks inflicted on American society were considerable and remain painful. However, the self-inflicted wounds that America has suffered in the years since 9/11 are proving to be even more damaging and long-lasting. It is imperative that we move beyond the impulse to overreact to the events of that terrible day. We must not continue to embrace counterproductive policies here and abroad, much less tolerate outright abuses.