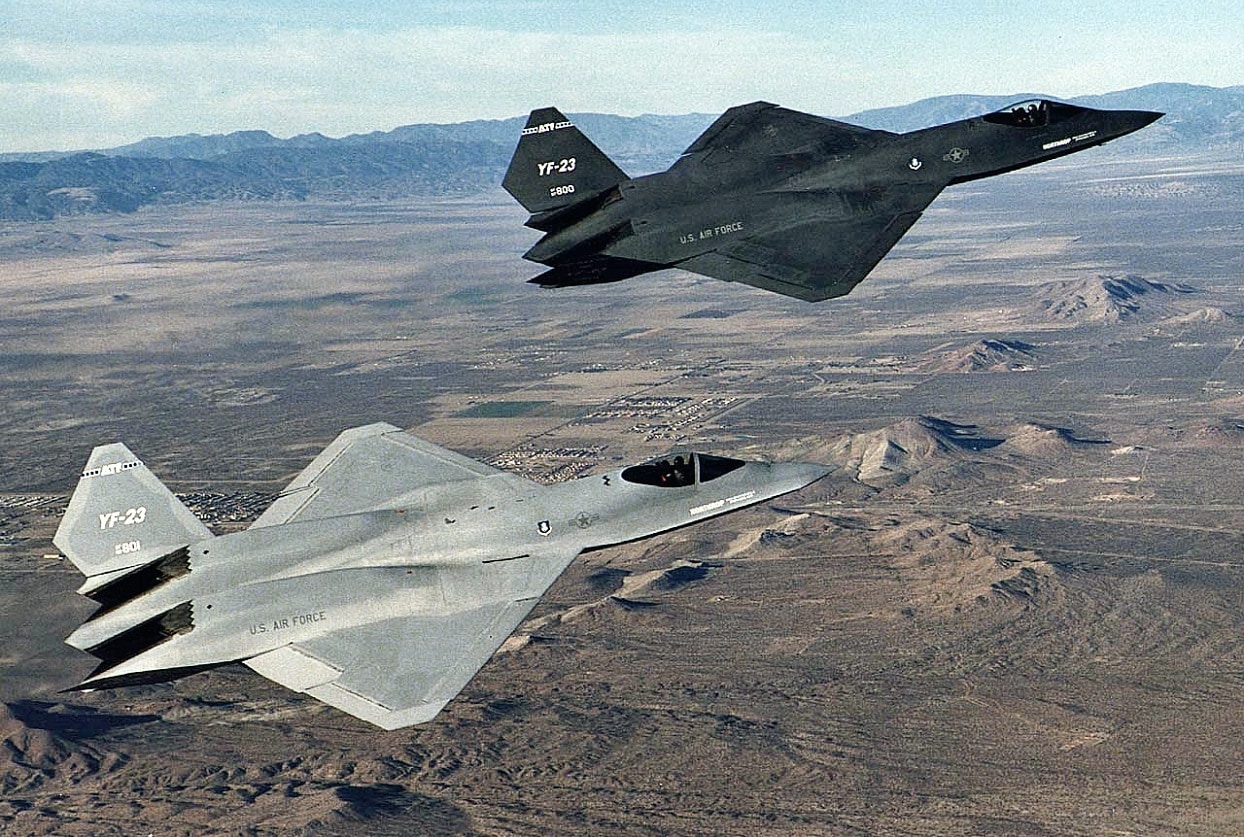 In the Research and Development Gallery at the National Museum of the United States Air Force there are some truly spectacular aircraft that never advanced much beyond the development and prototype stage. Within the massive hanger sits a North American XB-70 Valkyrie alongside a Northrop X-4 Bantam, a Grumman X-29A and even a Lockheed YF-12A. But one place stands out for many who love to consider what could have been: the YF-23 stealth fighter.

The Northrop-McDonnell Douglas YF-23A – just one of the two prototypes of the American single-seat, twin-engine stealth fighter aircraft technology demonstrators designed for the United States Air Force’s Advanced Tactical Fighter (ATF) competition. The goal of the program was to find a replacement for the F-15 Eagle air superiority fighter. In 1986, the Air Force awarded demonstration contracts to two competing industry teams.

The YF-23A was completed in the late 1980s/early 1990s where it went up in the ATF program against the Lockheed-Boeing-General Dynamics YF-22A. The YF-23A emphasized stealth characteristics, and to lessen weight and increase stealth, Northrop opted against using thrust vectoring for aerodynamic control – which was used on the Lockheed YF-22A.

Two prototypes of the YF-23 were built by the Lockheed-led team, each with a different set of engines. This was done to evaluate two different experimental turbofan engines.

The first Prototype Air Vehicle 1 (PAV-1) was equipped with twin Pratt & Whitney YF199 engines, while Prototype Air Vehicle 2 (PAV-2) was powered by a pair of General Electric YF120 engines. The two aircraft could be easily distinguished as the former was painted charcoal gray and unofficially nicknamed “Spider” or “Black Widow II” – in honor of the Northrop P-61 Black Widow flown during World War II – while the latter was painted in two shades of gray and nicknamed “Gray Ghost.” Despite different engines, both of the prototype YF-23s were fast and stealthy, while the low profile and classified skin material on the airframes was said to be nearly 100 percent undetectable by nearly any radar system of the era.

YF-23 Stealth Fighter: Where Is It Now?

Both FY-23 aircraft remained in storage until mid-1996 when the decision was made to transfer to each to notable museums. “Gray Ghose” was first on exhibit at the Western Museum of Flight, but was reclaimed by Northrop Grumman used as a display model for a YF-23-based bomber. It was later returned to the museum and is currently at the new facility at Zamperini Field in Torrance, California.

Black Widow II was sent to its current home at the National Museum of the United States Air Force in 2000, and has a true place of honor in the Research and Development hangar alongside other potential “what might have been” warbirds.