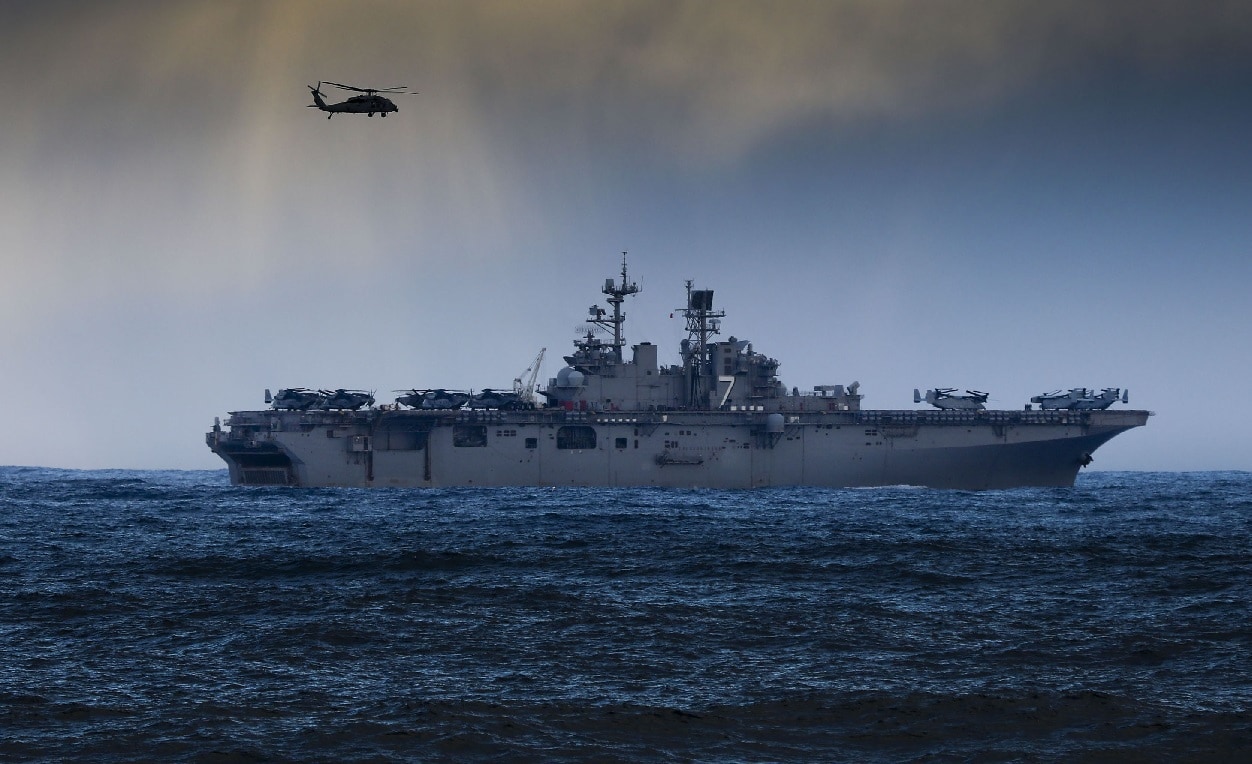 US Navy amphibious assault ship USS Iwo Jima, part of a NATO task force, sails near Iceland October 23, 2018 carrying elements of 45 Commando Royal Marines and US Marines traveling to NATO exercise Trident Juncture 2018. With around 50,000 participants from 31 nations, Trident Juncture 2018 is one of NATO's largest exercises in recent years. Around 250 aircraft, 65 ships and more than 10,000 vehicles are involved in the exercise.

How would NATO’s naval forces react in a two-front war against Russia and China? Will the transatlantic alliance be able to deploy enough aircraft carriers on multiple fronts? These are some of the questions NATO military planners are struggling with. And they are using a string of exercises to test and refine the concept of multinational aircraft carrier strike groups.

The French Navy is leading such an exercise in the Mediterranean with warships from the U.S., Greece, Spain, and the United Kingdom. Exercise Polaris 21 focuses on high-end carrier strike group operations, proficiency, and interoperability.

As the exercise was starting, the French Navy released a statement about its goals and what threats it is designed to address.

“In a confrontation situation that would oppose them to a power using indirect strategies and having recent equipment, the French Armed Forces must be able to propose several military options, covering all environments and fields of conflict in a coordinated and synchronized manner. Acting simultaneously at sea, on land, in the air, in exo-atmospheric space and cyberspace, in the informational and electromagnetic fields, this is precisely what POLARIS 21 is all about,” the French Navy stated.

“Operating alongside our allies is always a privilege, not only for our crew to hone their mariner skills but also to showcase our commitment to stability in the region. Participating in multinational exercises, especially with an allied forces carrier strike group, ensures Porter is always ready to execute any mission,” Commander Christopher Petro, the commanding officer of the USS Porter, said in a press release.

In addition to the warships, naval special operations, mine warfare, and air assets took part in the exercise.

“Building relationships with our allies and partners is an integral aspect of Porter’s mission. Polaris 21, is a fantastic opportunity to integrate with our NATO Allies, especially when it allows us to stretch our tactical acumen,” Commander Joseph Hamilton, the executive officer and second-in-command of the USS Porter, added.

A goal of NATO is to have naval task forces comprised of one NATO aircraft carrier and several supporting NATO warships that could be shifted around.

For example, in its current maiden operational deployment worldwide, the British aircraft carrier HMS Queen Elizabeth led Carrier Strike Group 21, which contained mostly Royal Navy supporting warships and included other NATO vessels. This concept allows smaller members of the transatlantic alliance to still contribute in a significant way regardless of whether they have major surface vessels.

But for such multinational naval task forces to be viable and—more importantly—effective in real circumstances, extensive training that builds interoperability is mandatory. You can’t expect to have two vessels from two different countries using two different platforms and speaking two different languages to be working as a team without training.