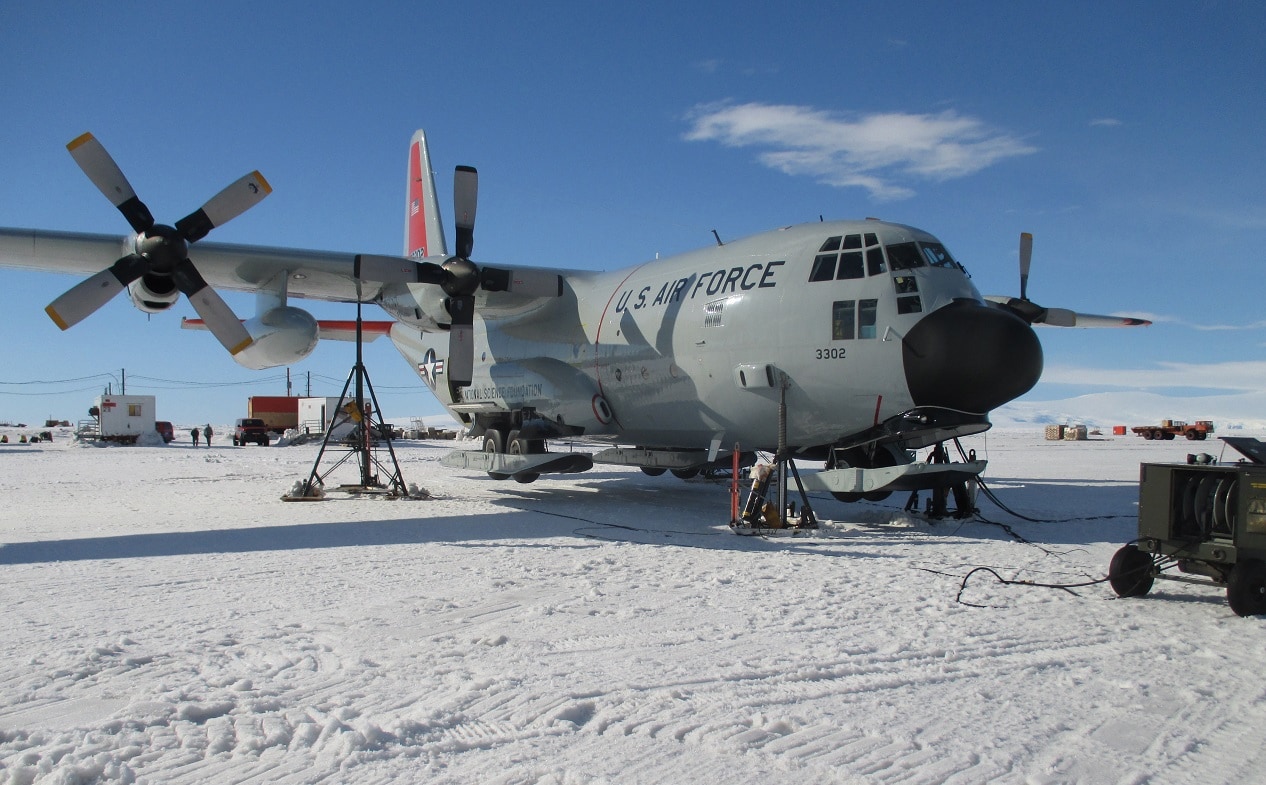 An LC-130 Skibird from the New York Air National Guard is jacked up on the frozen ice shelf of Pegasus field Jan. 16 after aircrew discovered a landing gear issue. The maintenance crews of the 109th Airlift Wing do not have hangars to work out of while deployed to Antarctica for Operation DEEP FREEZE and must work in the elements and handle unique challenges nearly every day. (U.S. Air National Guard photo by Master Sgt. Kevin Phillips/Released)

A Chilean friend asks whether the craze for building “icebreakers or polar ships” will continue and whether it’s coming to the Antarctic. My rambling answer: probably so, to a degree. But I doubt polar operations will take on a martial character in Antarctic waters the way they have in the Arctic.

In fact, the best way to espy the future of Antarctica is to compare it to the Arctic basin’s present.

For one thing, the claimants to sovereign territory in Antarctica do not exactly make up a murderer’s row. NATO and Russia glare at each other across the Arctic, and their commercial and political interests often clash. Contrast that with Antarctica, where Argentina, Australia, Chile, France, New Zealand, Norway, and Great Britain have lodged claims to parcels of ground. Now, much of the continent does remain unclaimed, principally Marie Byrd Land. Whether Antarctica becomes a cockpit for geopolitical competition probably depends on whether it harbors natural riches that can be harvested at a reasonable cost, advancing economic weal for the harvester. Resources have a way of fueling competition, whether it’s the 49ers rushing pell-mell to California in the mid-19th century to pan for gold, or Asian powers vying for jurisdiction over fish and undersea oil and gas in the China seas today.

Relations should remain placid in polar climes unless and until Antarctica starts yielding enough riches to repay investments in the region. Tranquil times are good.

But there’s a more basic reason why Antarctica should remain quiet compared to the Arctic, and that’s geography. The Arctic is not just a preserve for natural wealth; it’s a conduit for nautical traffic. If climatologists have it right and polar sea routes open to navigation for more and more of each year, merchantmen can cut their voyages between, say, East Asia and Western Europe by some 30-40 percent. Climate change promises massive savings in fuel, wear and tear on hardware, crew salaries, and kindred shipping costs. Manufacturers and shippers can sell their wares to consumers at lower costs while boosting their profit margins. A good deal all around.

A navigable Arctic also has military value. Russia in particular would benefit from having a dependable sea route along its northern seacoast. Movement between Russian coasts is difficult at the best of times, demanding long transits through intricate maritime terrain, much of which could be contested in wartime. That’s one lesson from the Russo-Japanese War of 1904-1905, when the Russian Baltic Fleet had to make an 18,000-mile trek through the Indian Ocean to reach the Far Eastern battleground. The Imperial Japanese Navy’s Combined Fleet lay in ambush at the Tsushima Strait, where it made short work of its weary antagonist—putting an end to Russian sea power in Asia for decades to come.

Easy movement between European and Asian Russia would spare the Russian Navy a rerun of the Russo-Japanese War. Hence the vigor if not stridency with which Moscow asserts jurisdiction over the Northern Sea Route.

And there’s another aspect to Arctic geopolitics. The United States is an Arctic nation, as are fellow NATO nations such as Canada and Norway. If China or Russia wants to relieve American or allied military pressure in the Western Pacific or North Atlantic, they can do it by building up military strength in the Arctic. They can bring geopolitical competition to American and Scandinavian shores, and attenuate the allied presence along their shores. After all, the U.S. armed forces have to guard U.S. interests close to home, and that takes resources—resources that have to come from somewhere. Washington can either accept the northerly threat; siphon off forward-deployed forces to meet it, and thin out the U.S. forward presence in the process; or augment the U.S. military to provide sufficient ships and planes to handle the “new” theater, and potentially bust the defense budget.

Unlike the Arctic, Antarctica constitutes a massive barrier to navigation, not a conduit for it. There will be no transpolar sea route in the south—and thus Antarctica will not spur naval competition to the same degree navigable Arctic seaways will. Without the incentive to strive with one another at sea, Antarctic powers will have less need for naval power in the southern ocean, and thus less need for icebreakers to support naval operations. Whatever hulls they construct can go to commercial or scientific purposes.

Plenty is going on in the world, much of it bad. Here’s hoping Antarctica and adjoining waterways remain an exception to that trend.

In this article:Antarctica, Arctic, China, featured, Russia, US Navy