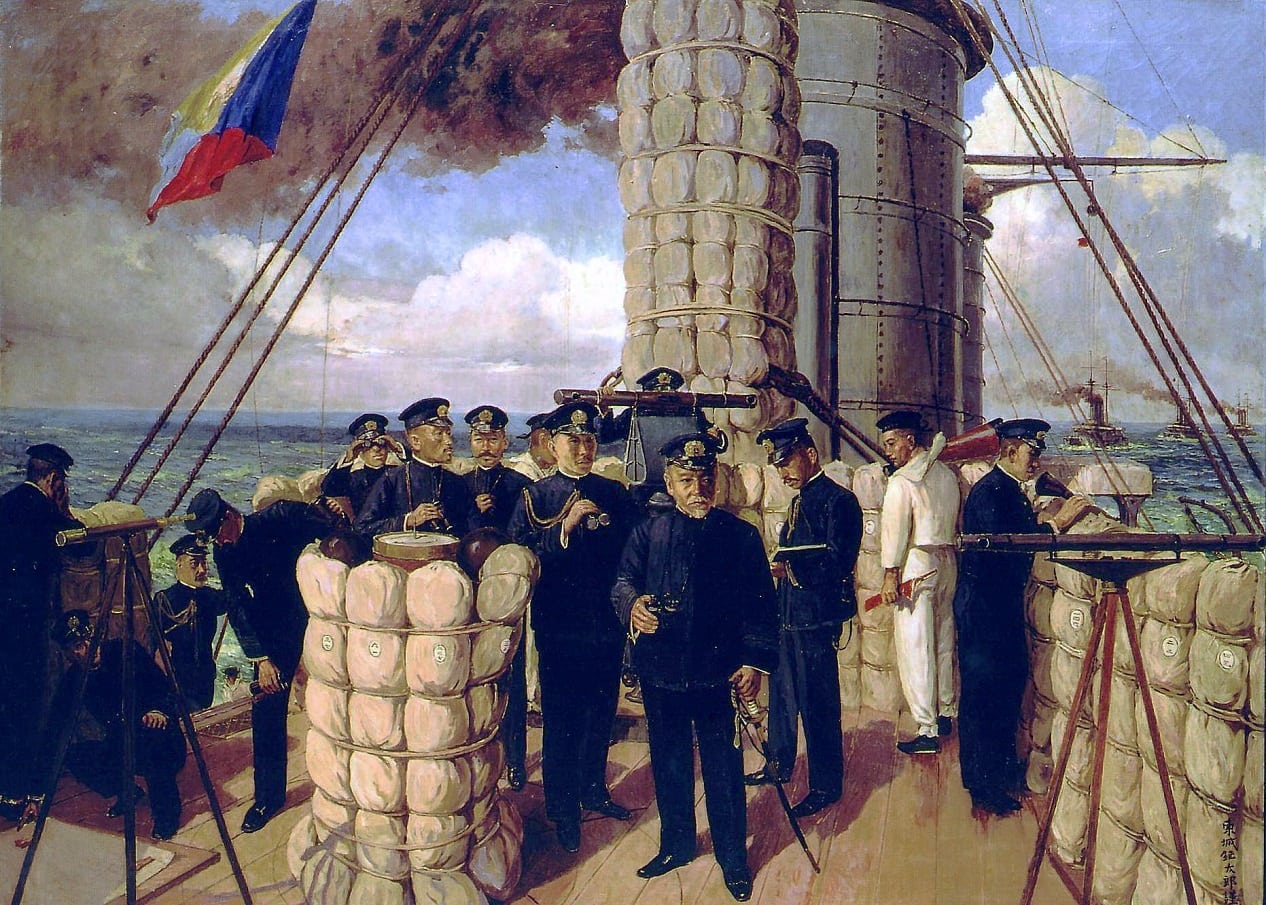 The Battle of Tsushima, Artist Rendering.

For all the hype around the power and capabilities of battleships – not to mention the fact that the capital vessels were even at the forefront of numerous naval treaties in the interwar era – there really has only been a single decisive battle involving the naval behemoths that changed history in a really meaningful way. Sure, there have been engagements involving battleships, but there is only one that truly changed history, in my opinion.

The battle I am talking about didn’t occur during the First or Second World War and instead took place during the Russo-Japanese War in 1905.

What is most notable is that the conflict even occurred before HMS Dreadnought entered service, and started a naval arms race when all previous battleships were essentially rendered obsolete. The era of the battleship could thus be seen to be over before it really even began.

It was during the Russo-Japanese War that the Russian Baltic Fleet, which had slowly steamed halfway around the world, was nearly destroyed. The decisive defeat at the Battle of Tsushima, in which just 10 of the 45 Russian warships present escaped to safety, was enough to convince Russian leaders that the war was lost. It ended Imperial Russia’s lofty ambitions to expand into the Far East, while it also gave rise to Japanese imperialism.

However, a few facts do need to be considered.

The first is that it wasn’t really an even battle from the beginning. The Russian Baltic Fleet – as noted – had traveled a great distance, while the Japanese were operating in waters much closer to home. The Baltic Fleet had only been sent to the Far East after the previous destruction of its Pacific Squadron that had come under attack in Port Arthur the previous year.

The entire journey had been a debacle. Under the command of Admiral Zinovy Rozhestvensky, veteran of the Russo-Turkish War (1877-1878), the Russian fleets set sail in October 15, 1904. Not long after it was underway, it experienced the first of several fiascos. While steaming through the North Sea, there were reports of Japanese torpedo boats operating in the area. That led to the Russians accidentally firing on a number of British fishing trawlers near the Dogger Bank.

The incident was so serious that the British nearly declared war on Russia, and even prepared to send out the Royal Navy’s Home Fleet. As tempers were cooled, the Royal Navy still directed a cruiser squadron to shadow the Russian fleet. Yet, because of the incident, the Russian fleet was prohibited from using the Suez Canal and had to sail around the Cape of Good Hope.

The Russian flotilla traveled nearly 18,000 miles, and had been at sea for nearly eight months when it finally arrived in the Far East. The crews were fatigued and the warships were badly in need of maintenance. In no way was the Russian Baltic Fleet – now the Second Pacific Squadron – remotely ready for a battle. 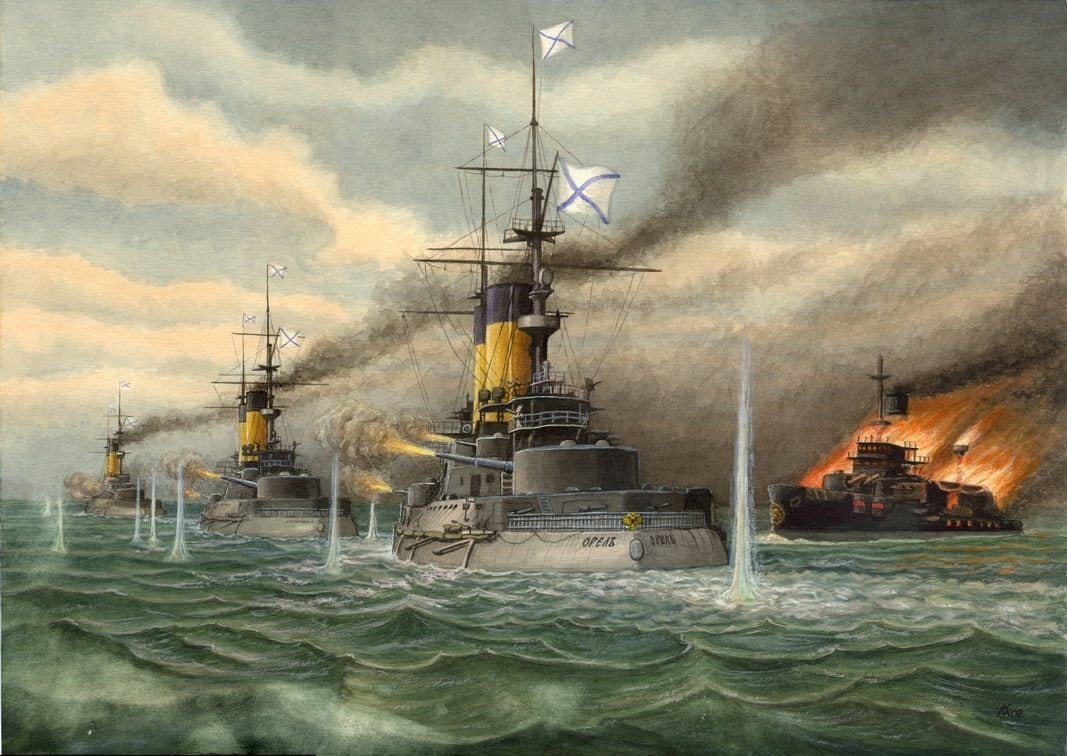 The Battle of Tsushima, Artist Rendering.

Then there was the fact that the Japanese fleet was greater in size and capability. Imperial Japan may have been an “upstart” compared to Imperial Russia on the world stage, but most of the Japanese warships were twice as fast as their Russian counterparts and were also more modern and advanced.

The Japanese Navy, which had also taken part in a conflict with Imperial China just over a decade earlier, had more recent combat experience. The Russian Navy hadn’t fought in a major war in decades, and many of its sailors had never traveled much outside of the Baltic Sea.

Upon arriving in the Far East, Rozhestvensky ordered his sea-worn vessels to make for Vladivostok via the Tsushima Strait, a 60-mile-wide (100 km) bottleneck between Korea and the Japanese island of Honshu. The Russian fleet almost made it, but on the evening of May 26, 1905, a Japanese patrol ship spotted the vanguard of the Russian flotilla.

A decade earlier that might not have mattered, but the Japanese fleet had been equipped with the then-new wireless radio. Admiral Tōgō Heihachirō didn’t miss the opportunity to strike. He rushed his ships into the strait to intercept the enemy. Rozhestvensky’s vessels, with their engines fouled by months on the high seas, were completely unable to match the enemy’s speed and proved to be proverbial sitting ducks.

More than 80 Japanese warships, including four battleships, pounced on the Russians after daybreak.

The battle, which took place at the Tsushima Strait between Japan and Korea (then controlled by the Japanese), saw the destruction of 21 Russian warships, while seven more were captured. After several hours of nonstop broadsides, nearly two-thirds of the Russian fleet was destroyed — including six of his most prized battleships. Japan lost three small torpedo boats in the encounter with fewer than 700 Japanese sailors as casualties; while Russia suffered 6,000 wounded and 5,000 dead.

The Battle of Tsushima was one of the most one-sided battles in naval history. And as I and others would argue, it was the first time and the last time battleships would slug it out to the death in anyway that impacted history. With the loss of its fleet, Russia accepted the war was lost as well.

However, it should also be noted that the land campaign had been far more even. During the Battle of Mukden, which took place earlier in the year as the great naval engagement, Japanese losses were twice that of Russians. Yet, Japan’s might on the high seas allowed it to win the war. It wouldn’t be the last Japanese naval victory, but by the end of the Second World War, the Imperial Japanese Navy would suffer far greater defeats.

Peter Suciu is a Michigan-based writer who has contributed to more than four dozen magazines, newspapers and websites. He regularly writes about military small arms, and is the author of several books on military headgear including A Gallery of Military Headdress, which is available on Amazon.com. Peter is also a Forbes Magazine Contributing Writer.