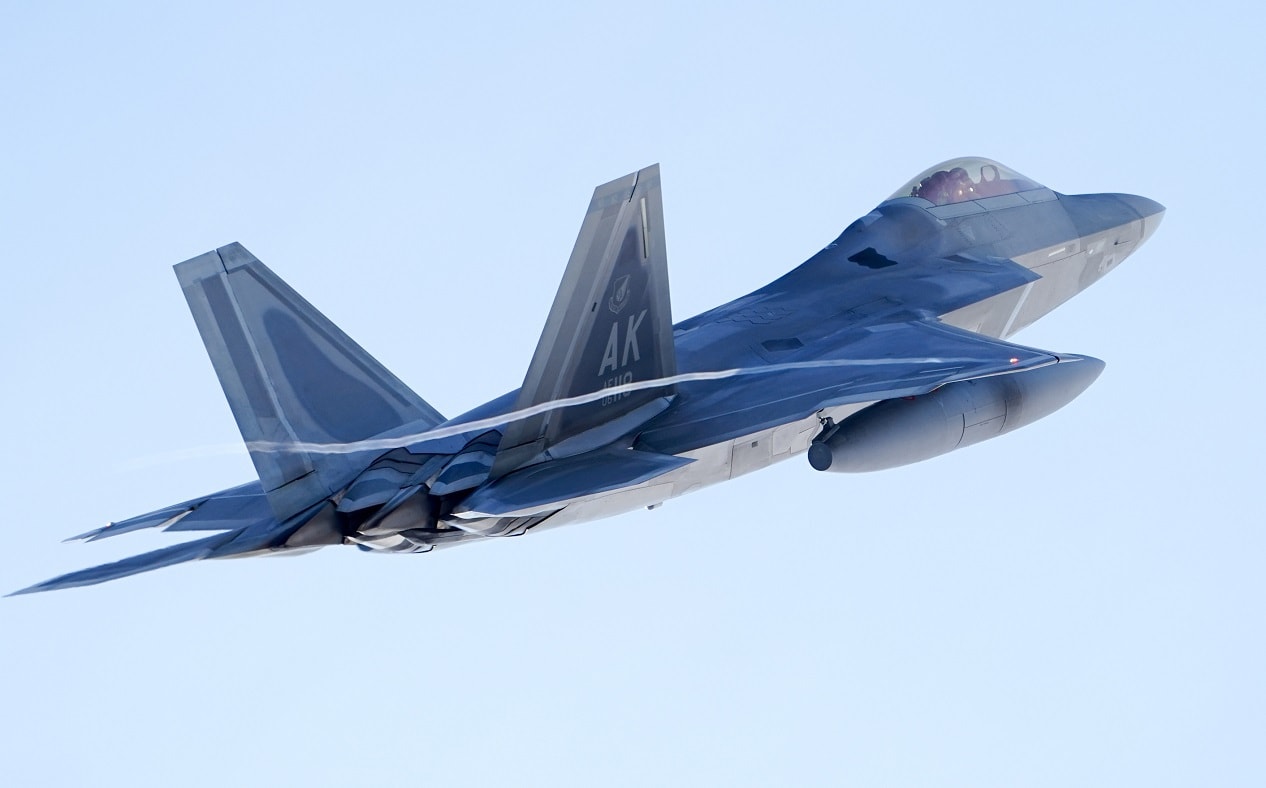 An F-22 Raptor takes off after Raptors from the 3rd Wing and 477th Fighter Group participated in a close formation taxi, known as an Elephant Walk, March 26, 2019, during a Polar Force exercise at Joint Base Elmendorf-Richardson, Alaska. This two-week exercise gives squadrons an opportunity to demonstrate their abilities to forward deploy and deliver overwhelming combat airpower. (U.S. Air Force photo by Justin Connaher)

And Much More as the New National Defense Strategy is Coming Soon: With the new year almost upon us, the US Department of Defense is already working on its new defense strategy that is due in early 2022.

In December, a senior Pentagon official spoke to the press about the next National Defense Strategy, offering some critical insight into the document that will drive the U.S. military for the next year.

During an event titled “Mission Brief: The Next National Defense Strategy,” Dr. Mara E. Karlin, who is performing the duties of deputy undersecretary of defense for policy, outlined the Pentagon’s plans for its new strategy.

The first and foremost challenge that the new National Defense Strategy will focus on is China. However, as a global force, the Pentagon plans to work with allies and partners to deal with other challenges, which, according to Carlin, are metastasizing or shifting but not disappearing.

Integrated defense is the new buzzword that will describe the Pentagon’s new strategy.

“The concept of integrated deterrence reminds us how it has to be really front and center to how we think about dealing with challenges,” Carlin, who was previously the Director of Strategic Studies and an Associate Professor at the Johns Hopkins School of Advanced International Studies (SAIS), added.

“The idea of integrated deterrence means that you are integrating across your domains, so as I’m looking at a challenge, how does cyber play into it? How does space play into it? [We won’t] just go to our traditional thinking of air, maritime and ground. Take that and think through them. How do you integrate across domains? How do you integrate across the whole of government? When we see a challenge, how do we make sure that we are using the military when it fits for a purpose? We’re thinking about diplomacy, and indeed leading with diplomacy. It also means integrating across allies and partners,” the senior Department of Defense official added.

Alongside the Nuclear Posture Review and Missile Defense Review, the National Defense Strategy is the military component of the National Security Strategy. According to Carlin, the Department of Defense has to work hard to ensure an intellectual consistency between the three different reports, especially when it comes to budgets, resources, and capabilities.

Since 1987, in accordance with the Section 603 of the Goldwater-Nichols Department of Defense Reorganization Act of 1986, the White House has published the annual National Security Strategy. The report communicates the president’s national security vision and plans to the legislative branch.

According to the Office of the Secretary of Defense, the National Security Strategy provides discussion on proposed applications of all facets of U.S. power, including but not limited to the U.S. military, needed to achieve America’s security goals. The annual National Security Strategy report is obligated to include a discussion of the United States’ international interests, commitments, objectives, and policies, along with defense capabilities necessary to deter threats and implement U.S. security plans.

First, defend and nurture what makes the U.S. powerful—its people, economy, defense, and democracy. Second, foster “a favorable distribution of power” in order to deter and stop adversaries, such as China or Russia, from threatening the U.S. and its allies through dominance in key global commons, such as the South China Sea, or dominate key regions, such as Africa. And finally, lead and sustain an open, stable international system that hinges on democratic alliances, institutions, and the rule of law.