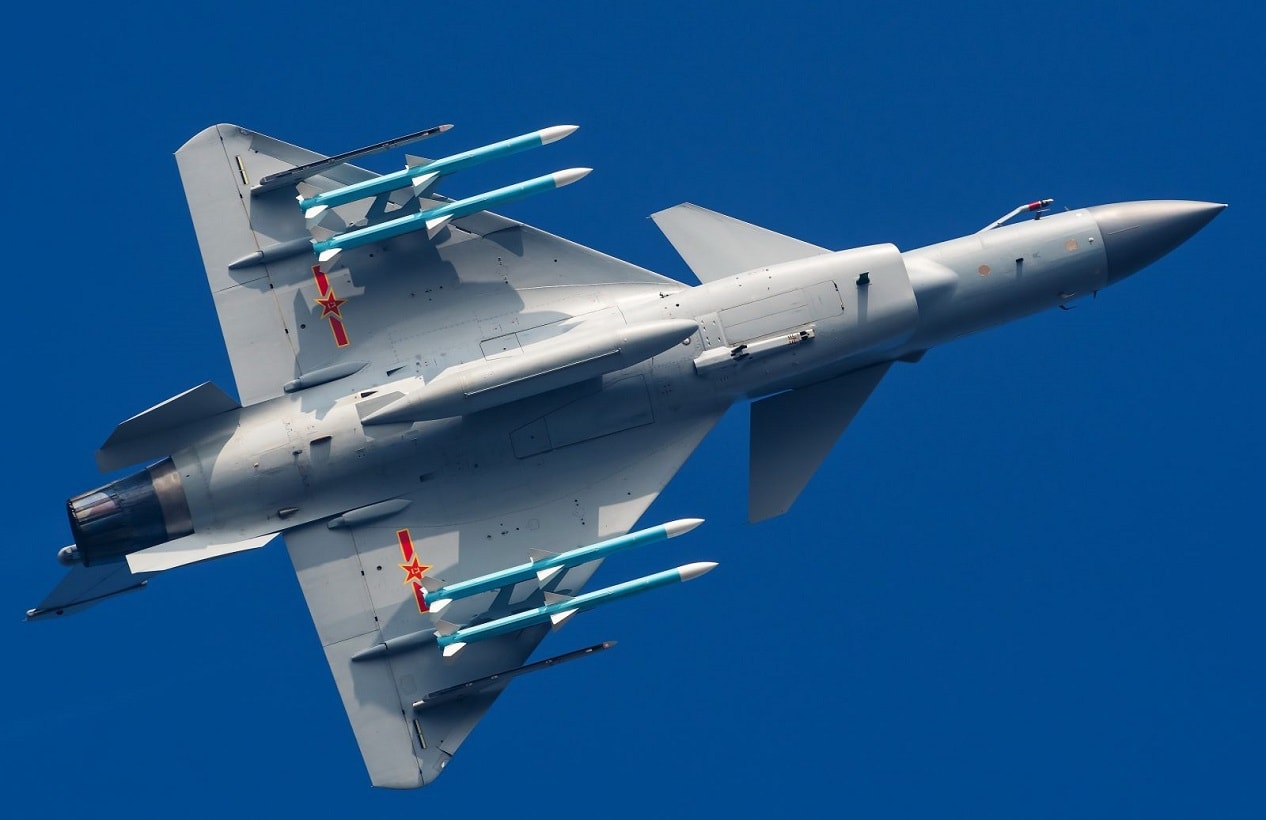 China’s J-10 Fighter, Explained in 5 Minutes: The J-10 “Vigorous Dragon” is a mainstay of China’s effort to modernize its large fleet of single-engine jet fighters, with 350 already in service. An agile tactical fighter similar to the ubiquitous F-16 Fighting Falcon, the Vigorous Dragon was the first domestic Chinese design roughly on par with Western and Russian fourth-generation fighters.

However, there is considerable evidence that the J-10’s development was heavily informed by a jet fighter developed by Israel with U.S. engines in the 1980s.

Israel first manufactured its own jets after its order of French Dassault Mirage Vs was embargoed in 1967. Israeli agents obtained Mirage V schematics (and most likely manufacturing components and even airframes), allowing Israel Aerospace Industries to produce two domestic clones: the Nesher and the improved Kfir. These both served with the IAF and were exported broad.

Between 1969–1979, the IAF received high-performance twin-engine F-4 Phantom fighters and F-15 Eagles from the United States. However, it still wanted a cheaper single-engine tactical fighter to replace its increasingly vulnerable A-4 Skyhawk and Nesher jets. So why not also build the Nesher’s replacement domestically?

The resulting dapper IAI Lavi (Lion Cub) had delta-wings (good for high-speed performance) combined with canards, a second set of small wings near the nose for improved lift and maneuverability. The Lion Cub was so maneuverable it was aerodynamically unstable, but an advanced quadruple-redundant fly-by-wire flight control system counter-acted the instability.

Composite materials were extensively incorporated to lower the Lavi’s weight down to just 7.25-tons empty. A compact Pratt & Whitney 1120 turbofan slung under the belly delivered large amounts of thrust, allowing the little Lavi to fly far and fast carrying up to a sixteen-thousand-pound payload.

In fact, with the exception of the canards, the Lavi closely resembled in appearance and capability the U.S.-built F-16s that entered Israeli Air Force service in 1980. These soon saw extensive combat service, destroying the Iraqi Osirak nuclear reactor and shooting down over forty Syrian fighters over Lebanon without loss.

Israeli and U.S. critics of the Lavi pointed out Israel was investing $2 billion in development costs to reinvent an airplane it had already bought from the United States. The more ground-attack oriented Lavi did differ in a few respects, however. It had a lower maximum speed of Mach 1.6-1.8 compared to the Falcon’s Mach 2, but had 50 percent longer range. It also had a powerful internal mounted jamming system for self-protection. The Lavi’s Israeli-designed avionics were comparable to the later F-16C model than the more rudimentary F-16A.

However, by the 1980s jet fighter development costs had grown exponentially as they grew more and more sophisticated; and, unlike the Nesher and Kfir, the Lavi was not cloned from an existing design. IAI hoped to make back the costs by exporting the Lavi, particularly to states facing embargoes due to poor human-rights records such as Apartheid-era South Africa, Chile and Argentina.

But the U.S., provider of 40 percent of the Lavi components, didn’t want to subsidize a competitor for the F-16. Washington signaled it would only cooperate if Israel refrained from exporting the Lavi.

By 1987 IAI had built two flying two-seat Lavi prototypes which demonstrated excellent performance in eighty-two test flights. Three more were under construction. It had also tested the PW1120 turbofans on an F-4 ‘Super Phantom’ which demonstrated such extraordinary performance it even flew a demo at the Paris Air Show and was briefly considered for export.

However, the extraordinary financial commitments the Lavi entailed made it extremely politically divisive. On August 30, in an 11-12 vote, the Israeli cabinet canceled the Lavi. Ninety additional F-16s were procured instead.

From Israel to China

Thus ended Israel’s production of domestic jet fighters—but not of advanced weapons and components for jet fighters, which was greatly boosted by technologies developed for the Lavi.

One notable export was the Python-3 heat-seeking missile, which boasted the then still-rare ability to engage planes from any aspect using a helmet-mounted sight. The technology was licensed for production by China’s Xi’an Aircraft Corporation in 1989 as the PL-8 missile, which remains in service today.

Other technologies transferred include the E/LM-2035 doppler radar (derivatives installed on the J-8 and J-10 fighter) and the Tamam inertial navigation system.

In fact, during the 1980s, the U.S. and Western Europe were also exporting military technology to China, then seen as a counter-balance to the Soviet Union. U.S. firms even explored co-developing updated J-7 and J-8 fighters for Beijing. However, Chinese-Western defense cooperation ended abruptly following the Tiananmen Square massacre on June 4, 1989.

However, in the mid-1990s, U.S. newspapers began reporting that intelligence agencies were concerned about continued Israeli technology transfers to China—including some components given to Israel by the United States.

This included allegations that Israel had transferred Lavi technology for China’s program to develop a fourth-generation jet fighter. The Chengdu Aircraft Corporation had begun work on the J-10 in 1988 under engineer Song Wecong, who can be seen next to a Lavi in this photo (fourth from the right).

In his book Lavi: the United States, Israel and a Controversial Fighter, John W. Golan wrote:

Israeli involvement in the J-10 appears to have begun at around the same time that China first opened diplomatic relations with Israel in January 1992 . . . Israeli contractors were engaged to provide the aerodynamic and structural outlines for the J-10. The Israeli influences on the J-10’s design are unmistakable: a close-coupled, canard-delta arrangement; a single-engine fighter featuring a ventral engine inlet; twin ventral strakes; and an area-ruled fuselage.

You can see the striking resemblance in these photo comparisons.

According to Golan, “Israeli involvement in the J-10 program appears to have been curtailed at around the same time, with Russia stepping in to market Soviet-developed avionics systems to supply production versions of the aircraft.”

Both Song and IAI officials have staunchly denied collaboration in the J-10’s development.

However, in 2008, Jane’s reported that in extended interviews with several visiting Russian engineers that Chengdu “benefited from significant, direct input from Israel’s Lavi programme – including access to the Israel Aircraft Industries (IAI) Lavi aircraft itself . . . This has included extensive design and performance modeling, wind-tunnel testing and advanced aerodynamic design input . . . Jane’s was told how Chengdu officials of the highest level stated how they had one of the IAI Lavi prototypes in their facilities.”

Hypothetically, Jane’s Russian sources may have been spreading misinformation. Russia’s aviation industry has a decidedly love-hate relationship with China.

However, if Israel did transfer Lavi technology to China—both parties would have strong incentives to deny it.

At any rate, the J-10 is more inspired by the Lavi than an outright clone. It is significantly longer and heavier, and has different wings. In his book, Golan explains that China lacked access to the compact PW1120 engine and the capability for wide-scale manufacturing of lightweight composite components. (China finally achieved the latter with the Y-20 transport plane.) Therefore, Song had to lengthen the J-10’s fuselage by two meters to accommodate a Russian AL-31F turbofan, resulting in an 11.75-ton jet.

Nonetheless, the J-10 remains an agile, versatile and inexpensive multirole fighter designed from the outset to incorporate hi-tech avionic systems and guided weapons. Though not a cutting-edge stealth aircraft, it marked an important milestone in China’s military modernization—achieved, most likely, with a little foreign assistance.