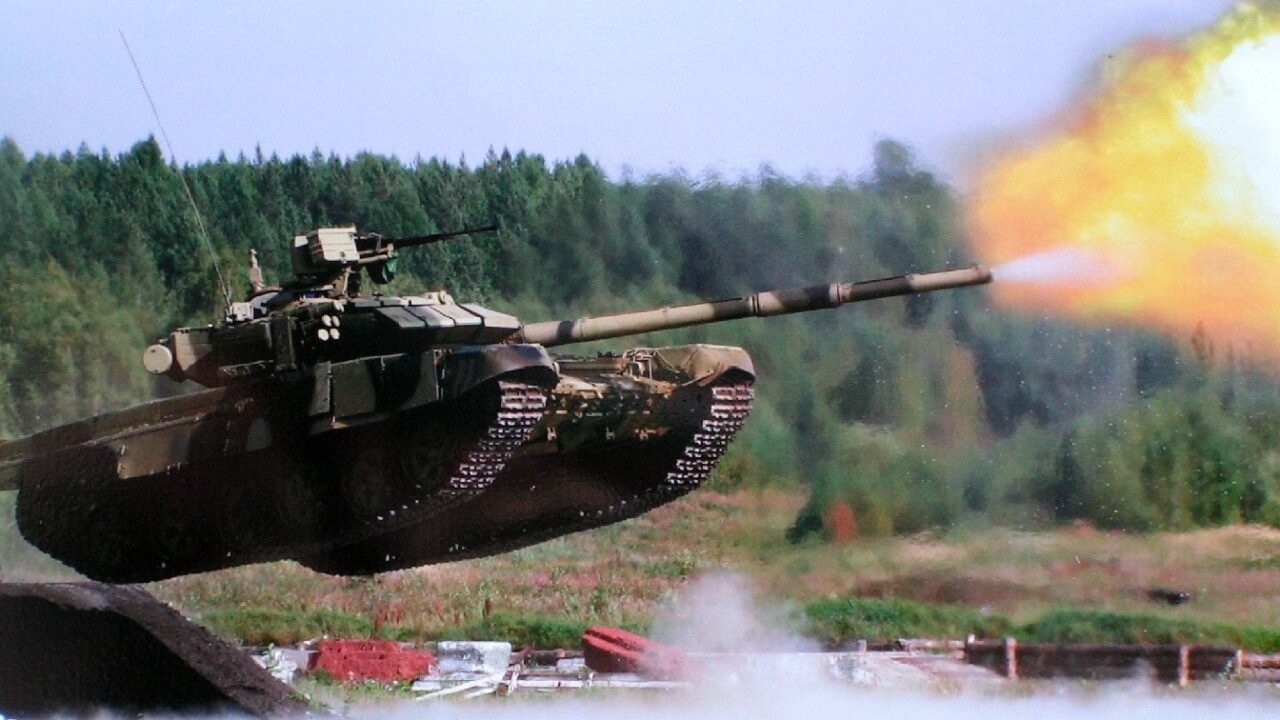 Russia’s T-90 Tank vs. Javelin Missiles: Who Wins? – Russia is bragging about the new T-14 Armata, but it is not clear when this next-generation main battle tank will be ready. So that means the reliable T-90 will have to do. The real question for the T-90 is how will it perform against anti-tank missiles?

Results in Syria during the civil war in 2016 and 2017 were mixed. Russia gave 30 T-90s to the Syrian Army. At least five were taken out of action by rebel anti-tank missiles – a pretty mediocre performance. This may be the T-90s weak point – ambushing them with hits to the turret from anti-tank missiles.

1945 has extensively covered the T-90 here and here. The main selling point of the T-90 is its armor system. This has two levels. First, there is the composite armor protecting the turret. Next is the Kontakt-5 explosive reactive armor (ERA). These ERA blocks are installed to diminish the penetrating power of armor-piercing munitions.

That armor system should protect the T-90 from anti-tank missiles. But in Syria, the rebels used TOW-2A missiles they got from the Americans. TOW stands for “Tube-launched, Optically tracked, Wire-guided.” This is not a fire and forget system. The TOW must be tracked by the vision of the operator. The operator keeps the sight’s crosshairs centered over the target until impact. The TOW-2A was moderately successful against the T-90. The next question is: how would the T-90 do against the Javelin anti-tank missile?

The Javelin Anti-tank Missile Is One Tough Customer

The U.S. Military’s Javelin is fire and forget and it is devastating to an enemy tank. Operators do not have to optically target the missile. There is no further input required after launch. The Javelin is portable and shoulder-fired. While still around 50 pounds, the Javelin is a lot more manageable than the TOW, which requires a heavy tripod. The Javelin can be used in day or night, and in all kinds of weather. Just align the infrared sensor with a target and the Javelin does the rest.

This is where the chess game starts because the T-90 has countermeasures that it can engage to try and spoof the Javelin. T-90’s Shtora-1 active protection system is designed to jam the infrared sensors of anti-tank missiles. The Shtora-1 can send out smoke grenades that release an infrared-masking aerosol cloud. The Shtora-1 also has an early warning system that can sense when it is being “lased” by the enemy.

Ukraine Has Javelins Too

The Russians are concerned about the Javelin because the T-90 had some problems against the TOW-2A that was used by untrained rebels. In 2018, Ukraine bought 37 Javelin launchers and 210 of the Javelin missiles. The U.S. requires the missiles to be stored far from the separatists and frontlines of the Donbas region, but this doesn’t make the Russians feel any better.

The Javelin has a range of two-and-a-half miles and three miles when launched from a vehicle. Remember, this is fire, and forget. It would not be difficult to set up an ambush of three launchers and a good number of missiles to take out T-90 tanks, no matter how good their countermeasures. Russia has a problem with its T-90 tanks and that is the threat from anti-tank missiles, especially the Javelin. If the older TOWs can penetrate the armor, you know the Javelin can too. So, this fight comes down to the competence and prowess of the crews in the T-90 and the personnel firing the Javelin. The Javelin is a lot easier to operate, so my money is on the Javelin.