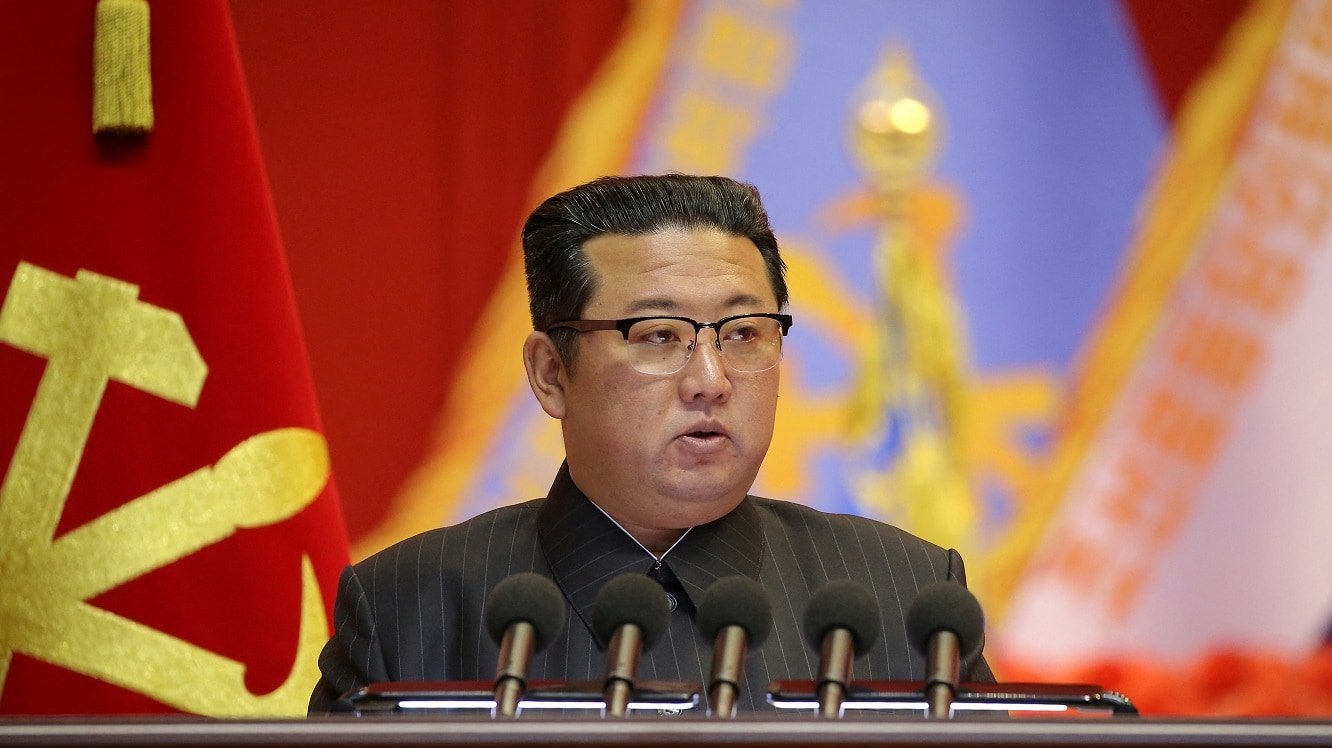 North Korea conducted a spate of missile launches testing various systems five times in 2022, so far.  Kim Jong-un knows how to stir up a reaction. Just a few subtle words from the party about reconsidering the 2018 pause in nuclear and ICBM testing and pundits go out of their minds. They are ready to throw in the towel and declare U.S. policy a failure and provide sanctions relief to appease Kim. This reveals a lack of understanding of the nature, objectives, and strategy of the Kim family regime. While the North criticizes the U.S for its alleged hostile policy it is the Kim family regime that continues to demonstrate a real hostile policy toward the U.S. and South Korea.

Kim Jong-un is executing a political warfare strategy against the ROK, the U.S., and the international community, as well as domestically. It is also preparing its warfighting campaign to be able to attack South Korea. These two lines of effort are not mutually exclusive, they are in fact mutually supporting and reinforcing. The more capable military systems the regime possesses, the more likely it can negotiate from a perceived position of strength. These actions and negotiations can contribute to driving a wedge in the ROK/U.S. alliance to try to achieve one of the regime’s key objectives: to force U.S. forces from the peninsula. Kim is likely to use the Moon administration’s end of war declaration proposal to further this objective.

When the conditions are favorable to Kim Jong-un or if he is threatened and he feels he has no other options he may decide to execute his campaign plan to dominate the peninsula and ensure regime survival. The recently tested missile systems will make important contributions to warfighting when they are fielded. If the political warfare strategy is successful and U.S. forces are driven from the peninsula Kim Jong-un may assess he has the combat power to successfully conduct a deliberate attack of the South. Therefore, political warfare and warfighting strategies are inextricably linked.

A criticism of the Biden administration is that it has not sufficiently articulated its North Korea policy so that the press and public can adequately understand it, and it leads to assessments that disparage it for being “engagement only.” The administration never “named” the policy just as the Obama administration did not and that leads the press and pundits to reprise the idea of “strategic patience.”

A criticism of the press and pundits is that the blame seems to always be on whatever U.S. administration is in office while insufficient blame is placed on the nature, objectives, and strategy of the Kim family regime. Perhaps they take it for granted that “everyone” knows that the root of all problems in Korea is the existence of the evilest mafia-like crime family cult known as the Kim family regime that has the objective of dominating the Korean Peninsula under the rule of the Guerrilla Dynasty and Gulag State. However, no one should take it for granted that people understand this. This is especially true among those pundits who call for maximum engagement (and appeasement) – they refuse to call out the regime’s evil nature and instead dream of making a diplomatic breakthrough through the lifting of sanctions.

We should also recall that during the Trump administration the U.S. set a very high red line for Kim – no nuclear tests and no ICBM testing. This has provided Kim freedom of action for anything below that. There were no significant responses to the sustained missile and rocket testing activity in 2019-2020 – with some 30 launches and tests. The ROK/U.S. alliance ceded the initiative to Kim so long as he did not test a nuclear weapon or ICBM. The alliance is now in a position of having to now find a way to lower that red line. It must begin with what we know of the Biden administration policy

The policy consists of five parts or lines of effort that are rarely addressed comprehensively:

Principled and practical diplomacy:  This is the focus of the press and pundits. What the Biden administration is doing in this line of effort is offering Kim the chance to act as a responsible member of the international community. However, the administration is not banking on that as it is employing the other four lines of effort that are too often overlooked by the press and pundits.

Alliance-based focus for deterrence, defense, and diplomacy: The U.S. also recognizes the importance of trilateral cooperation among both U.S. Northeast Asia alliances with the ROK and Japan.

“Stern deterrence“: This is about revitalizing the ROK/U.S. military alliance and strengthening defense capabilities to include returning exercises to a level that will sustain readiness (and support OPCON transition) and reverse the dangerous trend established by the previous administration that was welcomed by the current Moon administration. The ROK/U.S. alliance cannot back down in the face of North Korean increased tension, threats, and provocations.

A human rights upfront approach: Unfortunately, so far this has only been words with no significant action. The administration has failed to nominate an ambassador for North Korean human rights. Much more work needs to be done on human rights. Kim Jong-un must deny the human rights of the Korean power in the North to remain in power.

Full implementation of all relevant UN Security Council resolutions: This provides the “end state” objectives for an end to the North’s nuclear and missile programs, human rights abuses and crimes against humanity, the proliferation of weapons to conflict areas around the world, cyber-attacks, and global illicit activities. It also underscores one element that the current administration has in common with the previous one and that is sanctions will not be lifted until there is substantive progress toward compliance with the UNSCRs. Both Trump and Biden deserve credit for not giving in to the pressure in Seoul and among some in Washington who believe we need to lift sanctions to bring Kim to the negotiating table.

One thing that engagers overlook is that the President does not have the authority to make a unilateral decision to lift UN sanctions or stop enforcing U.S. laws as they pertain to North Korea. However, as noted, both presidents should have done more and hopefully, the Biden administration will do more in the future specifically by expending more effort on sanctions enforcement. The recent designation of the five Koreans from the North operating in Russia and China is a good start. However, due to Chinese and Russian complicity in sanctions evasion and preventing any further UN action the U.S. cannot count on U.N sanctions. It must act against not only North Korean entities by using U.S. laws but also implement secondary sanctions against Chinese and Russian banks and businesses.

When we discuss the administration policy, we should consider all five lines of effort. The administration also needs a pithy name to describe the policy otherwise the press and pundits will make one up or lazily continue to call it strategic patience. This needs to come from the administration so that it can control the narrative of its own policy.

To review, there are likely multiple reasons for the recent missile tests. First and foremost, the military requires them to advance these missile programs. These missile systems are designed for warfighting so we should interpret from this that Kim Jong-un continues to develop capabilities that can support his campaign plan to dominate the Korean peninsula.

Another reason is to send messages to the ROK, the U.S., and the international community. These are likely to support the regime’s blackmail diplomacy, which is the use of threats, increased tension, and provocations to gain political and economic concessions. The most important concession the regime demands is lifting of sanctions. However, to do so would allow Kim to assess that his strategy is a success and rather than come to the negotiating table in good faith he will likely double down with continued provocations.

Kim may also be conducting these tests to drive a wedge in the ROK/U.S. alliance. Given President Moon’s effort to have an end of war declaration and the apparent U.S. reluctance to do so, Kim senses that he can use provocations to weaken the ROK/U.S. alliance and undermine trilateral ROK, Japan, and U.S. cooperation.

The bottom line is Kim is executing a political warfare strategy and developing the capabilities to fight and win a war. These lines of effort are mutually supporting and reinforcing. Another way to describe the regime’s strategy is that is based on subversion, coercion/extortion, and when conditions are right, the use of force to dominate the Korean peninsula under the rule of the Guerrilla Dynasty and Gulag State to ensure the survival of the Kim family regime.

It is against this context that the comprehensive Biden Korean policy must be executed. Ultimately, what the Biden administration and the ROK/U.S. alliance must determine is the acceptable durable political arrangement on the Korean peninsula that will protect, sustain, and advance U.S. and alliance national security interests. Denuclearization is a step forward, but it is not sufficient and likely not achievable as long as the Kim family regime remains in power. The Korea question (per paragraph 60 of the Armistice) must be resolved. The only way we are going to see an end to the nuclear and missile programs and military threats, as well as the human rights abuses and crimes against humanity being committed against the Korean people living in the North by the mafia-like crime family cult known as the Kim family regime, is through the achievement of unification. That means the establishment of a United Republic of Korea that is secure and stable, non-nuclear, economically vibrant, and unified under a liberal constitutional form of government based on individual liberty, rule of law, and human rights as determined by the Korean people.

In short, a United Republic of Korea or UROK.