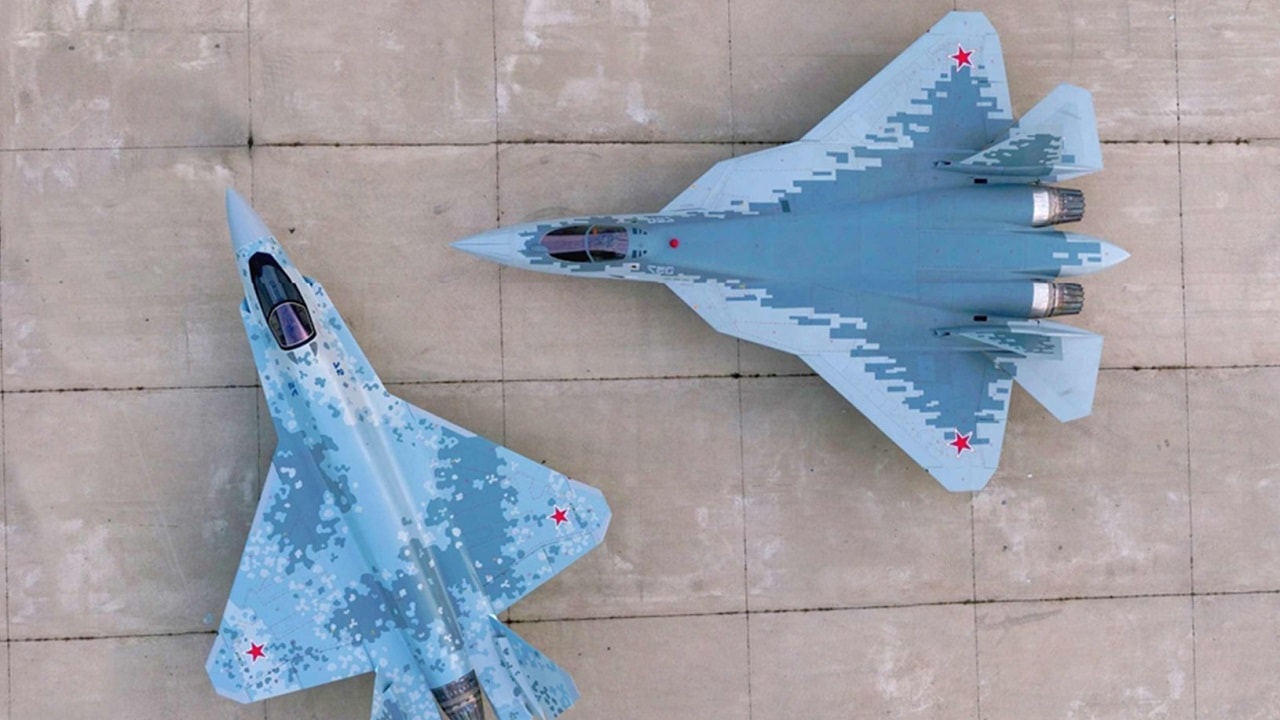 Su-75 Fighter May Be Russia Just Flexing Public Relations Hype – The name is a play on Russia’s love of chess and its defense firm is inexplicably offering its own perfume at air shows to whip up enthusiasm for foreign sales. Alas, the Su-75 Checkmate seems like more of a marketing and PR effort rather than a 5th-generation stealth fighter-bomber. International customers are necessary to pay for the program and Russia’s Sukhoi Design Bureau is pulling out all the stops.

Rostec, the umbrella entity that is over the Sukhoi Design Bureau, even enlisted government officials to extol the Su-75’s virtues at December’s Dubai Air Show. Russia’s Deputy Prime Minister Yuri Borisov believes that militaries from Africa, Vietnam, and India are interested in acquisition of the airplane.

The Russia Military Brand Is Tarnished

But in this day of sanctions on Russia after its invasion of Ukraine, foreign customers are likely to balk, leaving the Su-75 to flounder on its own. That’s because its predecessor, the Su-57 Felon, is still not completely ready for combat, despite at least two deployments to Syria, where it reportedly only flew in the background in a non-combat role. The stealth, twin-engine Su-57 may take until 2027 for serial production.

The Su-75 Checkmate Has Its Advantages

The Checkmate, on the other hand, has some enviable characteristics, according to the Russians. It can fly at MACH 1.8 with a range of 1,700 miles and a ceiling of 40,000 feet. It has a winged-body with V-shaped tail. Seven-tons of ordnance can hold an impressive load of missiles and bombs. However, it may not even fly until 2023.

It may be integrated with Russian drones such as the S-70 “Okhotnik” (“Hunter”), in a loyal wingman configuration. This would mean that the Checkmate could perform as the “quarterback” to meld a fighting force of manned and unmanned warplanes for greater combat punch.

Are New Fighter-Bombers Even Necessary for Smaller Militaries?

The Checkmate may not sell the way the Russians want it to.

Researchers from the RAND Corporation believe that the successful performance of attack drones over Ukraine such as the Turkish-made Bayraktar TB2 has given the global market for fighter-bombers a jolt. Why not buy cheaper combat drones instead of expensive next-generation fighters that need frequent expensive flight hours, difficult to acquire spare parts, and complicated maintenance.

“The nature of warfare is changing, and armed drones cost a fraction of the price of manned aircraft. Countries with scarce defense budgets may pass on Russia’s supposed 5th-generation fighter aircraft, no matter what features it is claimed to have,” RAND’s John V. Parachini and Peter A. Wilson wrote in Defense One.

Russia’s invasion of Ukraine has made Moscow a pariah in the international community. Countries are running away from Russia and into the arms of China, as 1945 has noted, or pursuing other suppliers for new airplanes and defense hardware. This is a knock-on effect that Putin and his war planning cronies have overlooked. Couple this with financial sanctions, and the Russian arms industry and airplanes designated for foreign sales like the Checkmate may find orders dwindling, no matter how extensive the marketing and PR is. There may not be enough rubles to keep the Su-75 program afloat.