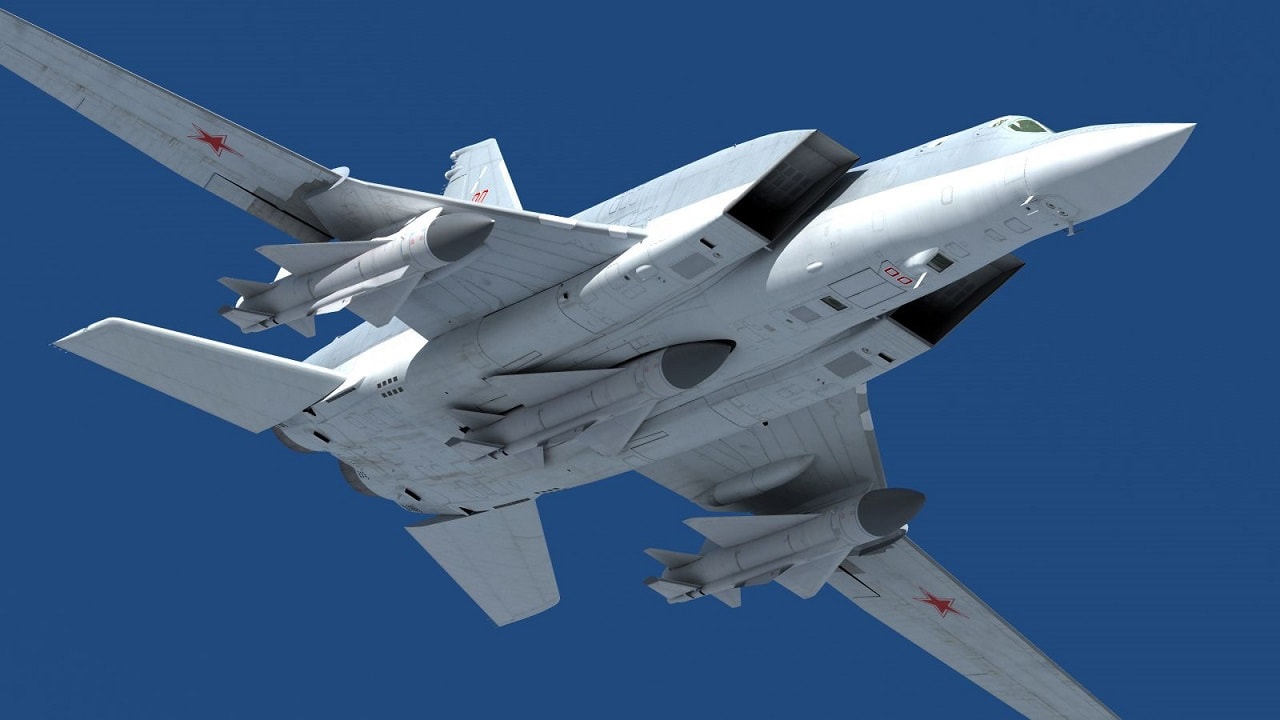 Russia is now using cruise missiles more widely in Ukraine. Are they effective? On March 7, in the city of  Popasna in Ukraine’s long war-torn Donbas region, soldiers stared intently at a video monitor inside a boat-shaped 6×6 vehicle called the 9K33M2 Osa—a Soviet air defense system dating back to the 1970s codenamed the SA-8B Gecko by NATO.

With a thump and abbreviated screech, one of the six ribbed containers on the Osa’s roof popped open and spewed out a supersonic missile at a hostile contact detected by the largest of the three big radar antennas on the Osa’s roof.

But rather than rely on the vehicle’s two smaller fire control radars for guidance, the operators opted to painstakingly guide the missile using a backup optical targeting system to avoid countermeasures. Course adjustments were automatically transmitted by radio to the missile as it whirled towards its target at nearly three times the speed of sound.

Fifteen seconds after launch, the crew cheered in jubilation as the missile apparently destroyed the fast-moving enemy. Subsequently, it was reported they had downed a relatively advanced Russian Su-30SM Flanker jet fighter.

Images have been posted of what was shot down.

According to our research, this appears to be a TRDD-50AT or very similar engline, which is used with Russian cruise missiles, such as the Kh-59M, Kh-59MK, and Kh-35; so not as significant as a jet fighter but a real shootdown. pic.twitter.com/MMi7AxLPno

But wreckage subsequently attributed to the shootdown didn’t look like that of a jet fighter. Instead, an engine identified as a TRDD50AT turbofan suggested the SA-8 crew had swatted a cruise missile on course to blast someplace in Ukraine with hundreds of pounds of high explosives.

According to the Pentagon, by March 9 the Russian military had launched at least 670 cruise and ballistic missiles in its war with Ukraine, a figure increasing by a few dozen every day.

Cruise missiles are basically robotic aircraft launched on a one-way kamikaze mission. They can strike targets from hundreds or even over a thousand miles away, well beyond the reach of retaliation.

Most land-attack cruise missiles (LACMs) fly below the speed of sound at 450-650 miles per hour, roughly the velocity of a cruising airliner. That leaves LACMs much slower than high-arcing ballistic missiles, but due to being smaller and flying closer to the Earth’s surface, they are harder to detect and more maneuverable.

However, cruise missiles are expensive—a U.S. Tomahawk missile costs $2 million per shot. Russian cruise missiles may cost around half that much, but overall are effectively less affordable due to Moscow’s more constrained defense financing and manufacturing.

Though Moscow started fielding land-attack cruise missiles way back in the 1950s, it didn’t really combat-test them until the mid-2010s, when it flung sea-launched and air-launched cruise missiles from submarines, warships and bombers at rebels in the Syrian Civil War. These first-of-their-kind strikes bore mixed results, with many missiles landing wildly off target.

#war The moment when the SS-N-30 cruise missile hit one of the military warehouse near Odessa, 🇺🇦#Ukraine pic.twitter.com/tVWLLkx9Pc

In Russia’s current invasion of Ukraine, reportedly half of the missiles fired at Ukraine originated from Russian soil, 70 were launched by Russian forces in Belarus, a “handful” originated from ships or aircraft on the Black Sea, and the rest were launched from Ukrainian soil. The preferred targets appear to be airbases, air defense radars and fuel or arms depots.,

One strike, for example, damaged or destroyed six Ukrainian MiG-29 fighters at Ivano-Frankivsk. These aircraft, however, were not in flyable condition at the time. Attempts to crater Ukrainian runways to impede flight operations, however, delivered less than impressive results.

Cruise missiles were also used for strikes against civilian and government targets, most infamously including the Kharkiv region state administration building at Freedom Square.

A freeze-frame prior to demonstration reveals the tell-tale rectangular wings of a Kalibr cruise missile, which actually just missed the building. It nonetheless reportedly killed eleven, including a family with three children consumed by flames in a nearby car and four civilians who had emerged from a bomb shelter to obtain water.

The various branches of the Russian military use different types of cruise missiles.

Ships and submarines of the Russian Navy are lobbing subsonic 3M14 Kalibur land-attack cruise missiles. Using a combination of satellite navigation, inertial and terminal radar guidance, these can supposedly land within 3 meters on average of a given target.

The Kh-555 is thought to land within 20-25 meters of a target half the time, the Kh-101, 10-20 meters thanks to its terrain-contour mapping navigation system and terminal infrared seeker. Ironically, Russia may be bombarding Ukraine with Kh-555s Kyiv sold to Russia two decades earlier. 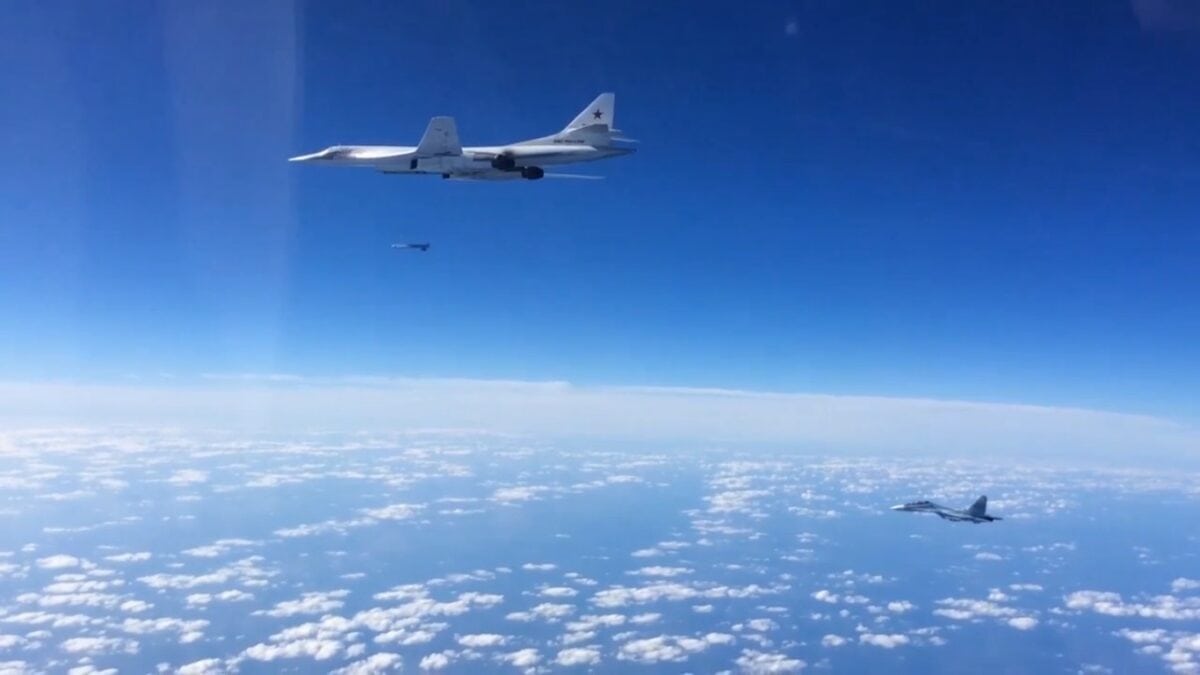 A Tu-160 bomber launching a Kh-101 cruise missile against targets in Syria, November 2015

There’s also the Kh-59MK2 (AS-22), believed to be the missile shot down at the beginning of the article, with a comparatively shorter range of 160-180 miles—still adequate for standoff attacks against many targets in Ukraine. This Kh-59MK2 missile can use both inertial and TV guidance and has a 705-pound warhead.

Finally, on the ground, Russia’s Iskander ballistic missile launchers can also 9M729 cruise missiles. Given the limited estimated scope of naval missile attacks, it seems the air-launched weapons and the 9M729 are playing a larger role than the better known Kalibr.

On March 6, the international airport at Vinnytsia was hammered by at least eight cruise missiles, allegedly fired by Tu-95 Bear and Tu-160 Blackjack bombers over the Black Sea. Video footage appears to confirm these were air-launched Kh-555 or Kh-101 missiles.

These reportedly destroyed an administrative building and set fire to stores of petroleum and oil lubricants, killing one person. No combat aircraft were destroyed, though, and it’s debatable whether the damage prevented military use of the airport.

New radar satellite imagery of Vinnytsia Airport in western Ukraine shows damage to air traffic control towers and an aircraft — but no apparent damage to the runway, similar to other airfields targeted by the Russian military. https://t.co/A9SyoiDUfy

Another strike targeting Ozerne airbase again left behind craters again suggesting they missed the runways being aimed for.

What have we learned about Russia’s cruise missile capability?

Cruise missiles have enabled Russia to deliver nearly a half-ton of high explosives to any target across Ukraine. That capability seems to have proven massively destructive when targeting Ukrainian fuel and ammunition depots, barracks, and immobile air-defense radars.

Attempts to strike airfields, however, do not appear to have destroyed many aircraft in flyable condition—only the loss of a single operational Su-27 on the ground can be confirmed—and to have mostly missed cratering runways.

Thus available evidence suggests Russia’s missile barrage has failed to substantially destroy Ukrainian air power on the ground as I and other defense writers thought likely to happen in a major Ukraine-Russia conflict.

Overall, that gives the impression Russia’s military lacks adequate real-time intelligence-surveillance-reconnaissance capability to rapidly detect and attack time-sensitive targets with a cruise or ballistic missiles; and that its missiles may not be precise enough to reliably hit targets smaller than buildings.

The strike on the Kharkiv administrative building indicates Moscow may use cruise missiles to hit non-military targets like government buildings deemed of symbolic import. However, the “benefits” of using expensive precision strike weapons on administrative buildings may not outweigh the anger and outrange caused abroad and amongst Ukrainian citizens.

Sébastien Roblin writes on the technical, historical and political aspects of international security and conflict for publications including the 19FortyFive, The National Interest, NBC News, Forbes.com and War is Boring. He holds a Master’s degree from Georgetown University and served with the Peace Corps in China. You can follow his articles on Twitter.