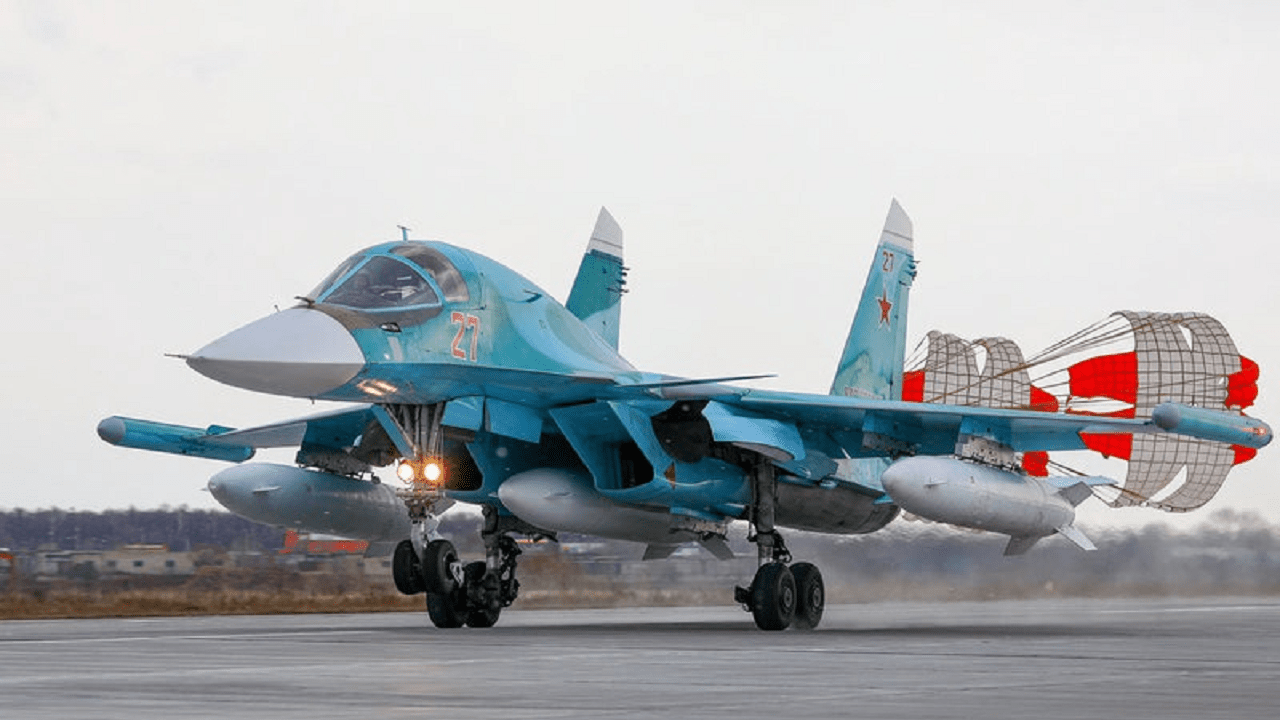 More Fiascos for Russia’s Military as Its Invasion of Ukraine Grinds On – The second week of Putin’s full-scale invasion of Ukraine kicked off with a surge of Russian airstrikes (following a sclerotic presence in the first week) and continued offensives in southwestern and across eastern Ukraine. But the main drive from Belarus towards northwestern Kyiv appears to remain bogged down, literally and metaphorically.

Ukraine Operational Command North: Abandoned T-80 tanks of 4th Guards Tanks Division, 1st Guards Tank Army. Possibly T-80BV and T-80U. Not sure how this advance turned out overall for them, they might be trying to get on T1705. pic.twitter.com/dGAho3UXYo

Large-scale civil disobedience by Ukrainian civilians in the occupied cities of Melitopol and Kherson also may be impeding operations.

Masses of ordinary Ukrainians are braving Russian invaders’ barrages to protest in occupied Kherson. A woman named Valentina Maganova says to the tune of gunfire: “We’re not afraid. Repost this across the world. Please, support us. Kherson is Ukraine!” pic.twitter.com/qJLLc1WUiy

Heavy casualties and misleading messaging from the Kremlin appear to be causing poor morale amongst Russian troops.

These conditions laid the ground for several fiascos for Russia’s military, even as its forces drive deeper into southwestern and eastern Ukraine.

After Russia’s heliborne assault landing on Hostomel Airport near Kyiv met with disaster on the opening day of the war, a second Russian landing operation recaptured the field. Either via the airport or land routes, the paratroopers were reinforced with their lightly armored BMD-2, BDM-4M and BTR-D fighting vehicles and Rosgvardia internal security troops.

These advance forces attempted to rush the western Kyiv in the first weekend of the war in an attempt to fulfill Putin’s ill-conceived war plans, but their assaults were repelled with heavy losses.

Intent on shutting down the Russian airhead, Kyiv’s defenders riposted, plastering the airfield with rockets and heavy artillery and launching a counterattack which wiped out the remaining paratroopers and Rosvgardia. Horrifying recordings of the streets of Hostomel show the charred remains of numerous BMD vehicles and their occupants.

Extraordinary video (and soundtrack) reportedly from Bucha outside Kyiv, near the Hostomel airbase pic.twitter.com/BanGJms3uB

The world’s largest airplane, the An-225 Mriya, was also destroyed in the fighting.

Video confirms the world's largest plane, the Antonov An-225, was destroyed at Hostomel Airport in Ukraine, ending days of conflicting reports pic.twitter.com/0geCjAHWaa

Ukrainian forces continue to hold Russian mechanized units at bay at Bucha, Hostomel and Irpin. For a good measure, open ground east of Hostomel leading to Kyiv has been flooded to constrain possible avenues of attack on the capital.

As correctly pointed out by some of you, Ukrainian troops seems to flooded the area north of Kyiv. That's the reason why the Russian advance is stagnating there. #Ukraine #UkraineRussiaWar #Kyiv https://t.co/aHRDDu1EC4 pic.twitter.com/ZUmQMRlvAh

On the heels of the failed air-landing operation at Hostomel and another Vasylkiv, on March 5 Russia’s military tried again to outflank Ukrainian defenses with heliborne paratroopers, this time in southwestern Ukraine. There, troops advancing out of Crimea under Lt. Gen. Mikhail Zusko made substantial gains when they consolidated control over the city of Kherson and its critical bridge over the Dnieper River.

Moscow aims to seize all of Ukraine’s Black Sea coastline, most importantly the port-metropolis of Odessa. But between Kherson and Odessa lie the Tylihul River and the port of Mykolaiv, also a Ukrainian naval base.

Russian advance forces had entered Mykolaiv even before Kherson was secured, but these early probes, and later full-fledge attacks, were repulsed by Ukrainian forces, aided by strikes from Ukrainian Su-24M bomber and Su-25 attack jets.

Looks like a Russian T-72B3 tank with a roof screen caught on the bridge near Mikolaiv when it was destroyed. https://t.co/LlrHR7GVX2 pic.twitter.com/XApiJym3v9

Zusko then switched focus to flanking Mykolaiv by moving on Voznesenk to the northwest. After several attacks by land were thwarted, on March 5 he dispatched elements of the 247th Air Assault Regiment (of the 7th Airborne Division) to execute a helicopter-borne landing operation in concert with another land offensive.

But while skimming close to tree-top height, the Russian helicopters were ravaged by short-range anti-aircraft missiles—apparently Igla or Piorun man-portable systems donated by Poland.

One shocking video captures the moment a Mi-24 Hind attack helicopter is struck in its two-seat canopy by a missile, causing it to plummet to the ground in a fireball.

Video of a Russian Mi-24 helicopter getting shot down reportedly from this morning. https://t.co/iCybV7ZjHW pic.twitter.com/NacZbhNGFS

A Russian Mi-8ASHt assault transport helicopter was downed, as well as two more escorting Mi-35 Hind gunships and an Su-30SM jet fighter. When another Mi-8 attempted to rescue the Su-30’s crew, it too was shot down.

The Russian paratroopers that made it to the ground came promptly under attack by local forces. The landing force was destroyed, and the 247th’s commander, Col. Konstantin Zizevsky reportedly killed in action.

#Ukraine: It seems that the Russian VDV was hit hard in #Mykolaiv. No less than 5x BMD-2 IFV (All with 9M113 ATGM, possibly more inside) and one with a RP-377VM C-IED jammer, as well as 2x BTR-D, were lost to Ukrainian forces. pic.twitter.com/99Y55Pg3vf

The metropolis of Kharkiv lies right on the border with Russia, and from day one has been under near continual indiscriminate bombardment by Russian forces, which also creeped forward troops to surround the city of two million.

By March 5, a Ukrainian official claimed the attack had destroyed the division’s 488th Motor-Rifle regiment, which left behind dozens of abandoned tanks, trucks and APCs. Ukrainian forces reportedly advanced all the way to the Russian border.

On March 6 another counteroffensive recaptured Chuhuiv and its large airbase, 11 miles southeast of Kharkiv. The Ukrainian military claimed the commander of the 61st Naval Infantry Brigade and deputy commander of the 11th Air Assault Brigade were killed in the attack. The latter seen questionable, though, as his death was reported March 2.

These counterattacks won’t bring an end to the siege of Kharkiv—Russian artillery can still hit the city from across the border, where Russian forces are concentrated in Belgorod. However, it has bought breathing room for the city’s defenders, and conceivably carved out space for further counteroffensives.

Russian units advancing out of Gomel, Belarus and Belgorod, Russia have been threading their way towards the east bank of Kyiv, overcoming Ukrainian defenses in smaller cities like Nizhyn and Pryluky along the way. But they have repeatedly failed to dislodge defenders from the heavily fortified cities of Chernihiv and Sumy close to the Russian border, despite withering artillery and aerial bombardment.

Aftermath of the ambush near Brovary city as two Russian tanks got destroyed by the Ukrainian “KORD” unit. #UkraineRussianWar pic.twitter.com/SU7wWUSJ7R

But it does leave those forces reliant on awkward supply lines—and significant Ukrainian garrisons next to those supply lines that may interdict the flow of fuel, ammunition and reinforcements and present a threat to flanks.

#Ukraine: The practical implementation of tactics to destroy supplies – a Russian convoy of 6 fuel trucks was destroyed near Pryluky, #Chernihiv Oblast. pic.twitter.com/B8ftEklMl2

Russian warplanes are falling out of the sky left and right.

For the first week of the war Russian airpower was only sporadically active over Ukraine, failing to wipe out Ukrainian air defenses or interdict the Ukrainian air force’s own operations. Relatedly, the downing of only one or two Russian fixed-wing aircraft could be confirmed.

That changed dramatically in March as video footage reveals a surge of Russian airstrikes across Ukraine, including by advanced two-seat Su-34 jet bombers hitherto not seen in action. A Russian TV report suggests MiG-31BM interceptors and older Su-24M bombers are active over Ukraine too.

But that been matched by a steep surge of confirmed losses, including at least four Su-25 Frogfoot ground attack jets. That’s not so surprising, as these were designed for dangerous low-altitude ground attack missions delivering unguided bombs and rockets.

Two factors may explain this: Russia has a comparatively limited stockpile of precision air-to-ground munitions, and likely is reserving the majority in event of a conflict with NATO. But Russian mission planners may also deem Ukraine’s surviving high-altitude air defenses—S-300 and Buk missile batteries—a greater threat than the numerous short-range air defenses Ukraine has saturated around the battlefield.

As a result, even Russia’s most advanced warplanes are being used like World War II fighter bombers: making low-level attacks with unguided bombs and rockets, and suffering World War II-level losses to ground fire. That’s unsustainable given how much more expensive modern warplanes are.

Despite these setbacks around Kyiv, Kharkiv and Mykolaiv, Russia’s multi-pronged invasion of Ukraine still advances on several fronts. The robust defense of Mykolaiv, for example, is complicated by a Russian naval infantry brigade embarked on landing ships in the Black Sea which may attempt an amphibious landing targeting Odessa in concert with an attack by Russian troops in the breakaway Transnistria region of neighboring Moldova.

Russian forces in southern Ukraine are also advancing northeast along the east bank of the Dnieper, threatening Zaporizhzhya and Dnipro, which have additional valuable bridges over the great river. And they’re enveloping the already besieged port of Mariupol on the Sea of Azov from the east.

Meanwhile, Russia’s 8th Army, bolstered by thousands of pro-Russian separatist troops, is slowly forcing back veteran Ukrainian troops deployed in the Donbass region. While these forces have avoided being overrun, they remain at risk of being cut off by Russian forces advancing north from Crimea and south from Belgorod.

Video of Ukrainian positions and equipment captured or destroyed in the Donbas. https://t.co/tUdsvyhk0A pic.twitter.com/zfo2LObS7r

Kyiv therefore faces fiendish dilemmas choosing between defending well-fortified cities in eastern Ukraine bound to be cut off from resupply, or attempting to fall back towards the Dnieper, a retrograde movement which could end catastrophically.

Sébastien Roblin writes on the technical, historical, and political aspects of international security and conflict for publications including the 19FortyFive, The National Interest, NBC News, Forbes.com and War is Boring. He holds a Master’s degree from Georgetown University and served with the Peace Corps in China.  You can follow his articles on Twitter.