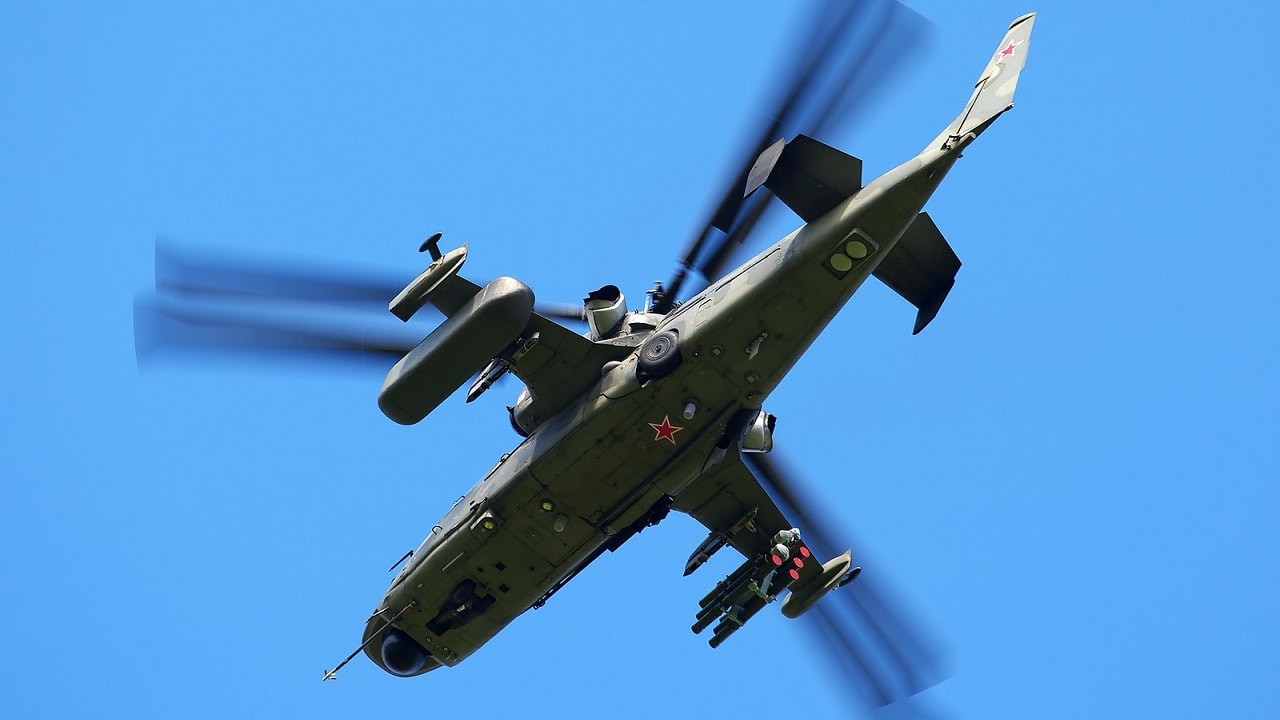 At around 8 AM local time on February 24, a formation of 34 helicopters flew south across the Ukraine-Belarus border skimming at low altitude towards the Ukrainian capital of Kyiv.

But the Alligators were but the escort for the real strike force: Mi-8 ‘Hip’ assault transports carrying a more lethal cargo: up to 300 elite Russian airborne soldiers. Reportedly the paratroopers may have come from the 11th Guards Air Assault Brigade.

The paratroopers, or desantniki, weren’t heading for Kyiv itself, but rather Antonov Airport ten miles northwest on the outskirts of the metropolis. Also known as Hostomel or Gostomel after the nearby town, Antonov Airport was operated by the former chief manufacturer of Soviet transport aircraft, and its 2.17 mile-long runway was used principally for cargo flights and aircraft testing.

The airport’s most famous resident was the world’s heaviest and widest cargo aircraft (in terms of wingspan) ever made: the only ever built Antonov An-225 Mriya (“Dream”), which has remained in demand to deliver oversized cargoes across the world on short notice, most recently shipment of Covid-treating medicines.

If the Russian assault went as planned, Antonov could be used to land thousands of additional airborne soldiers and their light armored vehicles by cargo plane, allowing Russian troops to begin tightening the noose around the Ukrainian capital even before Russian mechanized armies fought their way in.

Kyiv soon admitted the desantniki had seized control of an airport right on its doorstep.

The other problem was that openly inserting a small infantry unit deep behind enemy lines—say right next to the capital—is very risky, a move predicated on hopes that Ukrainian forces would be in such disarray they would be unable to mount a counter-attack.

So despite the overwhelming scale of Russia’s assault on Ukraine, the gambit for Antonov Airport did not go as planned.

Alligators in the Dnieper River

As Russian helicopters skimmed south along the Dnieper River dividing Kiev toward and Hostomel, they came under fire from small arms and man-portable surface-to-air missiles—likely Soviet Strela or Iglas-S missiles and/or possibly Piorun and U.S.-built Stinger missiles recently transferred from Poland and Lithuania respectively. Short-range air defense vehicles with autocannons and their own short-range missiles may also have engaged.

#war The footage was shot near Vyshgorod, 20 km from 🇺🇦Kiev. pic.twitter.com/ug8x7Viu4a

Aware of their peril, helicopters pumped out scores of brilliant flares in the hopes of decoying heat-seeking missiles. But it did not prove enough. One of the Alligators was struck and fell into the Dnieper, smoke pouring upwards into the sky even after its immersion.

Both the helicopter’s crew members ejected—an unique capability of the Ka-52 found in a few other helicopters—lofted down into the water as well.

Another Alligator appears to have sustained so much damage it was forced to crash land. Footage of the empty cockpit implies both crew members escaped.

#Russian Ka-52 appears to have made an emergency landing after being shot pic.twitter.com/NRFQ21NQML

Ukrainian sources claim a third helicopter downed, though confirmation is unavailable, with some alleging a Ukrainian MiG-29 fighter made the kill.

Contrary to Russian hopes, Kyiv’s defenders were not so disorganized as to fail to assess both the small size of the paratrooper force and the danger an enemy airheadt next to the capital posed if let uncontested. Indeed, after 10 AM a Ukrainian told a journalist their intelligence reported eighteen Il-76MD troop transports bound towards Kyiv had taken off from Pskov, base of the 76th Guards Air Assault Division.

First, the 4th Rapid Response Brigade of the Ukrainian National Guard surrounded the airport. This was a new model unit organized according to NATO standards combining light infantry, a battalion of T-64BV main battle tanks, an artillery battery and supporting surveillance drones.

But Ukrainian warplanes—having remarkably escaped Russia’s first strike—pounded the airfield in return, with an image showing two of Ukraine’s swing-wing Su-24M ‘Fencer’ bombers swooping over the airfield and releasing a brace of bombs, as well as flares for self-defense.

Due to the considerable change in lighting between this image and others previously posted we assess this to be early evening at Antonov Airfield on 02/24/22 – this is likely when Ukrainian Forces were reclaiming the airfield. pic.twitter.com/dugRWK5P1q

Another video recorded from a civilian home near Hostomel shows a Ukrainian MiG-29 skimming over rooftops and launching what appear to be unguided S-8 rockets terrifyingly close to the recorder—reportedly targeting either withdrawing Russian airborne infantry, or a Russian helicopter per various sources.

MiG-29 fighter jets of 40th Tactical Aviation Brigade of #Ukraine Air Force are trying to hunt the #RussianArmy airborne troops who are transported by helicopters to the North of #Kiev. This MiG-29 fired S-8 unguided rockets at them who are hiding between civilian houses. pic.twitter.com/CftTv0Cntx

Eventually, Ukrainian minister Oleksiy Arestovych claimed the airport had been secured by Ukrainian forces. But twenty minutes later he issued a partial retraction—a mopping up operation was still ongoing. When CNN’s Matthew Chance arrived at the airport gate he encountered Russian, not Ukrainian soldiers he was expecting.

Breaking: @mchancecnn with Russian forces at the Antonov airport about 15 miles outside of Kyiv. "These troops you can see over here, they are Russian airborne forces. They have taken this airport" pic.twitter.com/SnvmwQ1GeA

Later that evening, the Russian airborne were allegedly driven from the airport, though the remaining elements continued skirmishing in the woods outside of it.

Some accounts claim Ukraine’s ‘45th Spetsnaz Brigade’ was responsible for the final assault, but this appears to refer only to a Russian, not Ukrainian, unit. Instead, at 10 PM local time, the 4th Brigade’s Facebook page posted an image of soldiers holding a seemingly bullet-riddled battle flag celebrating the victory.

On the same site, Antonov Airline’s chief pilot assured that the legendary An-225 remained undamaged, contrary to earlier reports claiming its hangar had caught fire.

Kyiv’s forces may have sought to render Hostomel inoperable by demolishing or obstructing its runway after the battle. That’s because Russian forces crossing the Ukraine-Belarus border had reportedly penetrated through the Exclusion Zone around Chernobyl and were rolling towards northwestern Kyiv.

Furthermore, a contingent of Spetsnaz special forces infiltrated into Kyiv wearing Ukrainian military uniforms—incidentally, a violation of Article 39 of the Geneva Convention—sprang into action, causing small arms fire to echo throughout the capital.

Videos recorded from high-rise apartments in the northern Obolon suburb show a Spetsnaz- gun truck riddled by fire from Ukrainian troops, while a hijacked Strela-10 (SA-8) tracked air defense vehicles races away—only to run over a civilian car driving from the opposite direction. Remarkably the elderly man inside survived and was hospitalized for treatment.

Incredibly, the driver survived this. Pulled out of the wreckage thanks to bystanders pic.twitter.com/bgx5vT9cHH

Fighting meanwhile continued around Hostomel with remnants of the Russian airborne, who may have been reinforced by Spetsnaz or by Russian mechanized elements. Finally around 2 PM local time on February 25, Russia’s ministry of defense claimed it had recaptured Antonov Airport supposedly in an operation involving 200 helicopters, a number unlikely to be accurate.

While Ukraine’s victory at Hostomel may have proved ephemeral, it indicated that Ukraine’s military is neither paralyzed nor evaporating in the face of Russia’s assault like Georgia’s did in the 2008 Russo-Georgia war.

However, Ukraine’s capacity to defeat an arguably ill-advised Russian operational gambit does not assure future success. Russia is attacking Ukraine on so many fronts it can afford to be stalled in some areas, such as around Kharkiv and Mariupol, as long as breakthrough are achieved elsewhere, as has occurred in southern Ukraine at Kherson and Melitopol.

As Russia has yet to commit all its forces, it will likely use Soviet ‘echelon’ style tactic wherein troops withheld from the first wave are channeled down the most promising avenues of attack, or into as yet untested sectors deemed vulnerable.

Sébastien Roblin writes on the technical, historical and political aspects of international security and conflict for publications including the 19FortyFive, The National Interest, NBC News, Forbes.com and War is Boring. He holds a Master’s degree from Georgetown University and served with the Peace Corps in China. You can follow his articles on Twitter.