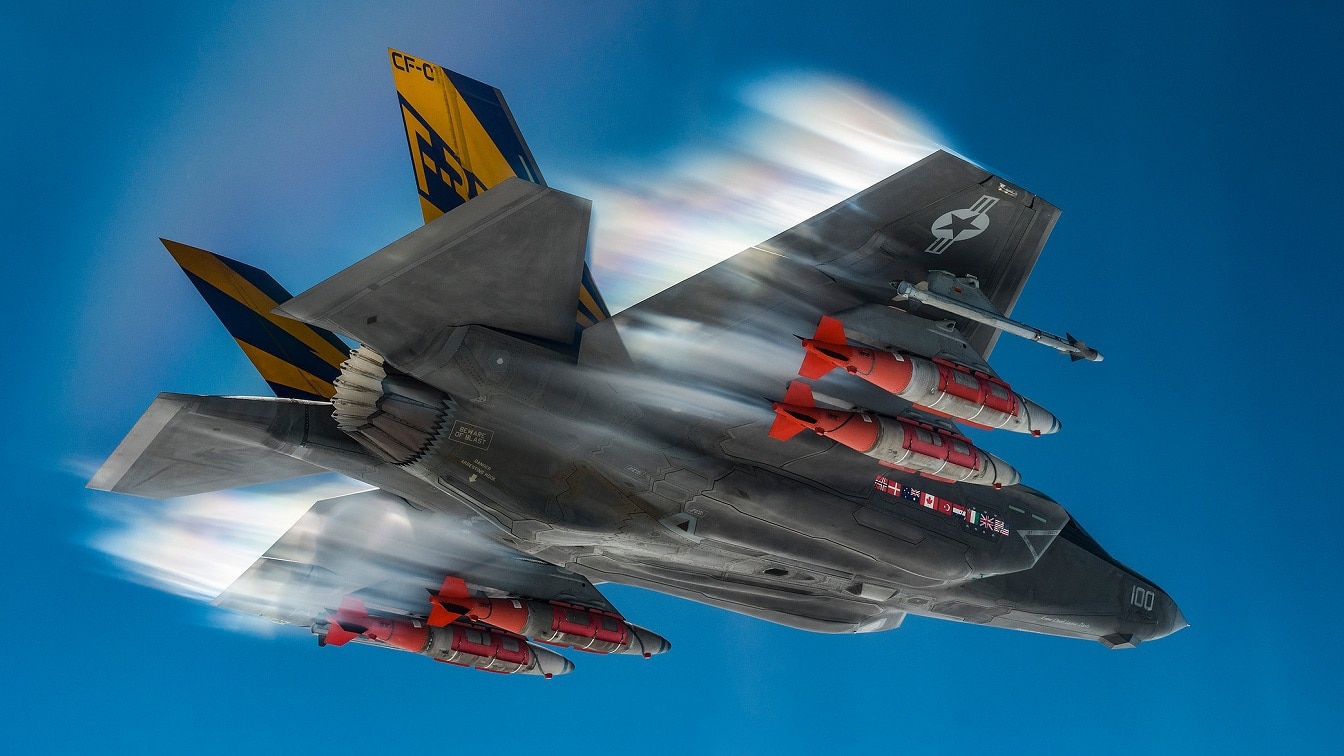 The F-35 Joint Strike Fighter is regarded by many as the best fighter on the planet today. And now it can drop nuclear weapons on a target – Did you know that an F-35A Lightning II is nuclear-capable? We have covered “beast mode” when the Joint Strike Fighter can be outfitted with an estimated 22,000 pounds of munitions. But these are conventional weapons. An F-35 can also drop nuclear bombs and we have the video to prove it.

Check out the 2020 film below of this test nuclear bombing run. The device dropped 10,500 feet from an F-35A at supersonic speeds with a dummy warhead and simulated nuclear components. It took 42 seconds for the bomb to hit its target:

This is a practice B61-12 gravity bomb that is guided by a tail-kit assembly and is thus quite accurate. You can see the tail-kit spinning mechanism come alive about two-thirds through the video. The test strike happened at the Nellis Range Complex’s Tonopah Test Range in Nevada.

The B61-12 is a small, tactical battlefield nuclear weapon. The actual strength of the B61-12 is classified but it is believed to have a maximum yield of 50 kilotons (50 thousand tons of TNT). In comparison, the B83 nuclear bomb is 1,000 kilotons. The B61-12 yield can be reduced depending on the battlefield target.

It can also be used as an earth-penetrating bunker-busting bomb. This could make it valuable in a second-strike scenario in which enemy ICBM silos would be targeted. This weapon would then have lower collateral damage and keep the number of civilians killed to a minimum.

The Upgrade Program Comes with a High Cost

The B61-12 update on the B61 family of tactical nuclear weapons has been expensive. Fuses and batteries had to be replaced on the older models and an inertial navigation system was added. The price tag for upgrading 400 B61-12s will be a whopping $7.6 billion. There have also been delays that have added to the cost. The new lifespan will be good for 20 years though.

The test was notable because it showed a stealth fighter with nuclear capability. The B61-12 can be dropped from an F-15E Strike Eagle and F-16 Fighting Falcon but those aircraft are not stealthy. The B-2 and B-21 bombers are stealthy, but they fly at below supersonic speed. So, the F-35A has a unique capability with this tactical nuclear bomb. The B61-12 will be in the internal weapons bay so that reduces the radar-cross section and allows the airplane to evade radar and sensors.

The nuclear-capable F-35A is an important development for the American nuclear triad. Here is a fast and stealthy delivery option that could eliminate enemy missile silos or many other targets. The bomb’s yield can be reduced to lower the chances of civilian collateral damage.