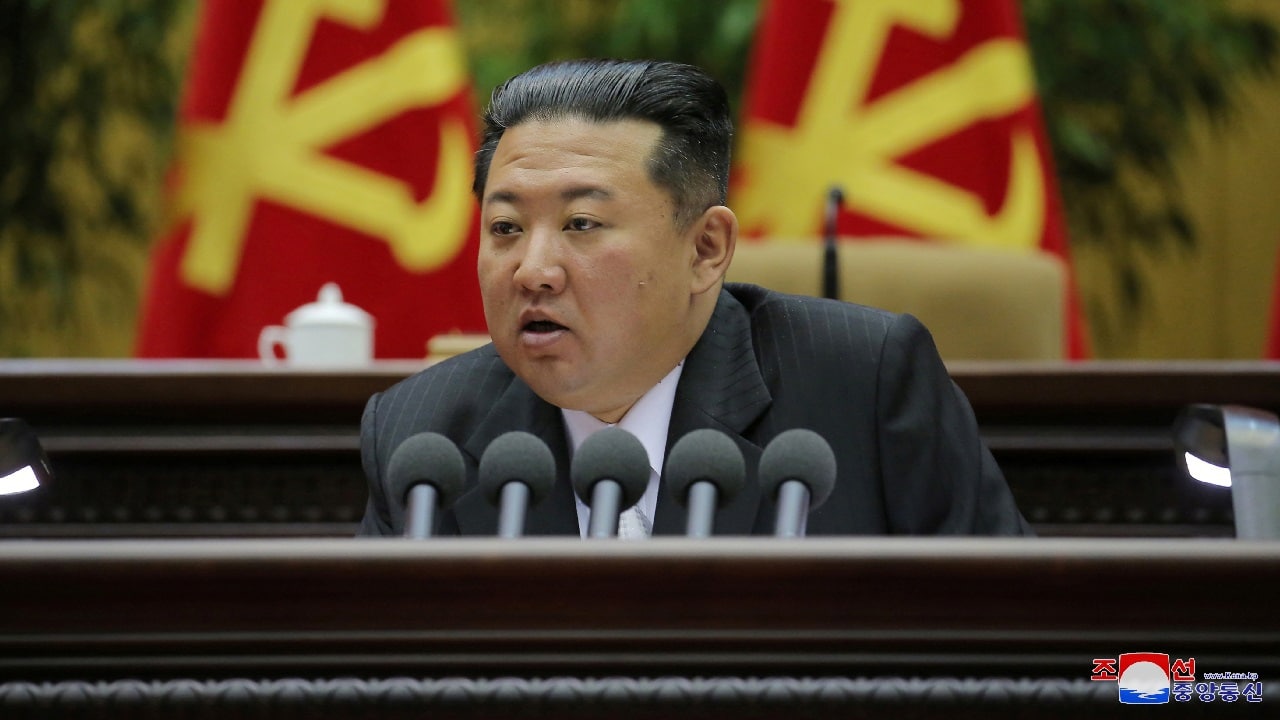 North Korean leader Kim Jong Un speaks during the 2nd Conference of Secretaries of Primary Committees of the Workers' Party of Korea (WPK), in this photo released on March 1, 2022 by North Korea's Korean Central News Agency (KCNA). KCNA via REUTERS.

Kim spoke to the nation, apparently wearing a mask in front of his people for the first time. Reported the Associated Press: “Kim called at a ruling party Politburo meeting for a thorough lockdown of cities and counties and said workplaces should be isolated by units to block the virus from spreading. He urged health workers to step up disinfection efforts at workplaces and homes and mobilize reserve medical supplies.”

What happens to a largely unvaccinated population in a desperately poor nation isolated from the countries and organizations most capable of helping?

Before Kim’s dramatic announcement, the regime was focused on self-congratulation. This is a big year for the Democratic People’s Republic of Korea and the Kim dynasty. Kim has been in power for a decade. His father, Dear Leader Kim Jong-il, died on December 17, 2011. Kim fils was named Supreme Commander of the Korean People’s Army on December 30th. Over time the latter solidified his hold on power and enhanced the DPRK’s missile and nuclear arsenals.

February 16 was the Day of the Shining Star, the 80th birthday of Kim pere. Although Kim Jong-il’s tenure was most notable for a terrible famine that killed hundreds of thousands and perhaps more, the dynasty admits no mistakes. Finally, the even more critical Day of the Sun occurred on April 15, celebrating the 110th birthday of North Korean founder and Great Leader Kim Il-sung. Ten days later came the 130th anniversary of the creation of the Korean People’s Army.

April 25th featured an obligatory military parade, originally expected on the 15th, but a new missile was highlighted, as was customary. And there was neither a nuclear nor an ICBM test, as feared. Still, these are expected to come. Even as the regime was closing the capital it was conducting three short-range missile tests.

However, the virus might prove to be a deadlier enemy of the North than the US. It is increasingly evident that China’s zero COVID policy is failing to halt the Omicron variant. Yet the PRC’s relatively ineffective vaccines and low vaccination levels among the elderly make a shift to a more open system difficult. However, Beijing’s policy, though looking increasingly unsustainable, has not yet proved to be medically or economically ruinous. China is wealthy enough to, so far at least, manage periodic urban shutdowns, as in Shanghai today, despite the extraordinary personal hardship caused.

Not so the DPRK, which decided to gamble with its people’s lives and country’s future. Until now, the cost was significant—lost trade, empty foreign embassies, suspension of aid programs—but appeared manageable. Indeed, Pyongyang found an additional benefit of hermetically sealing the border: shrinking foreign contact. Fewer North Koreans can flee their nation or gain access to South Korean movies, music, and television.

However, if the pandemic is fully loosed upon the North, disaster beckons. Few North Koreans, other than some number who are members of the ruling elite or have traveled abroad, are vaccinated. The DPRK’s health care system is primitive and has lost outside support from foreign NGOs, which maintained programs for the most vulnerable. Most North Koreans have been weakened physically from years of malnutrition and poor medical care. The ruling political ideology insists upon communal activities through which COVID could quickly spread: much more than in China, individual and family isolation is perceived as a threat to ideological control. A widespread infection could have catastrophic consequences.

Pyongyang’s lockdown highlights the regime’s consistent rejection of offers of assistance, including vaccines, over the past two years. One reason might have been embarrassment about admitting the need for aid. Another might be recognition that without additional assistance, the North’s health infrastructure could not vaccinate the population of 26 million—neither equipment nor electricity are available to keep so much medicine frozen around the country. And turning to foreign nations for help would require accepting the presence of many foreign workers. Alas, whatever the regime’s justifications, they look hollow today.

Kim naturally admitted no fault, claiming that victory over COVID is assured since the regime and people are “united as one.” Of course, such unity was supposed to prevent the problem in the first place. Moreover, he suggested business as usual for the North. Reported AP: “Despite the elevated virus response, Kim ordered officials to push ahead with scheduled construction, agricultural development and other state projects while bolstering the country’s defense posture to avoid any security vacuum.”

Nevertheless, Pyongyang’s unprecedented lockdown and Kim’s masked appearance demonstrated that he recognizes the problem is serious. However, his strategy appears inadequate. With an economy on life support, Kim cannot afford to shut down what little activity is occurring. So he wants to close “cities and counties” while keeping “workplaces” open. But shutting down areas and not organizations, as he suggests, is no easy trick.

Perhaps he assumes that Beijing will step in to undergird the system if it falters further. However, the DPRK will need more than oil and food if COVID-19 conquers North Korea. China reportedly has offered its assistance, though the North is perfectly capable of enforcing lockdowns. The Republic of Korea volunteered medical aid, but as yet, Pyongyang’s focus is on halting the pandemic’s spread.

What the North most needs is a mass vaccination program, but the government has rejected that course so far. The country might weather an Omicron wave if North Koreans were vaccinated. However, even this mild variant is a killer for the unvaxxed. And a vast infusion of foreign health care workers could do little to save victims of mass infection given the North’s grossly inadequate medical infrastructure.

North Korean TV has broadcast video of Kim Jong Un visiting the state emergency epidemic prevention headquarters on Thursday. Kim is again wearing a mask although took it off to address officials (and have a smoke) pic.twitter.com/QLJKPuD9zN

Now is the moment for a grand humanitarian gesture. The US, Japan, and South Korea should make a direct but private approach to Pyongyang, offering to provide whatever the North requires to prevent a medical catastrophe. Vaccines, as well as assistance in delivering them. Equipment to freeze stored medicines. Drugs for treating the infected. Personnel to help inoculate the population and treat the sick.

This offer should be expressed with the hope that no crisis develops. And without any conditions. It should not be presented as part of a political initiative, an attempt to engage the North in nuclear negotiations. Kim is aware that the Biden administration wants talks and has said no. An offer of humanitarian aid isn’t likely to change his mind. And a refusal would forestall desperately needed assistance from reaching the North. In contrast, perhaps Kim would say yes to a simple humanitarian proffer made privately and unconditionally. If not, little would have been lost from trying. 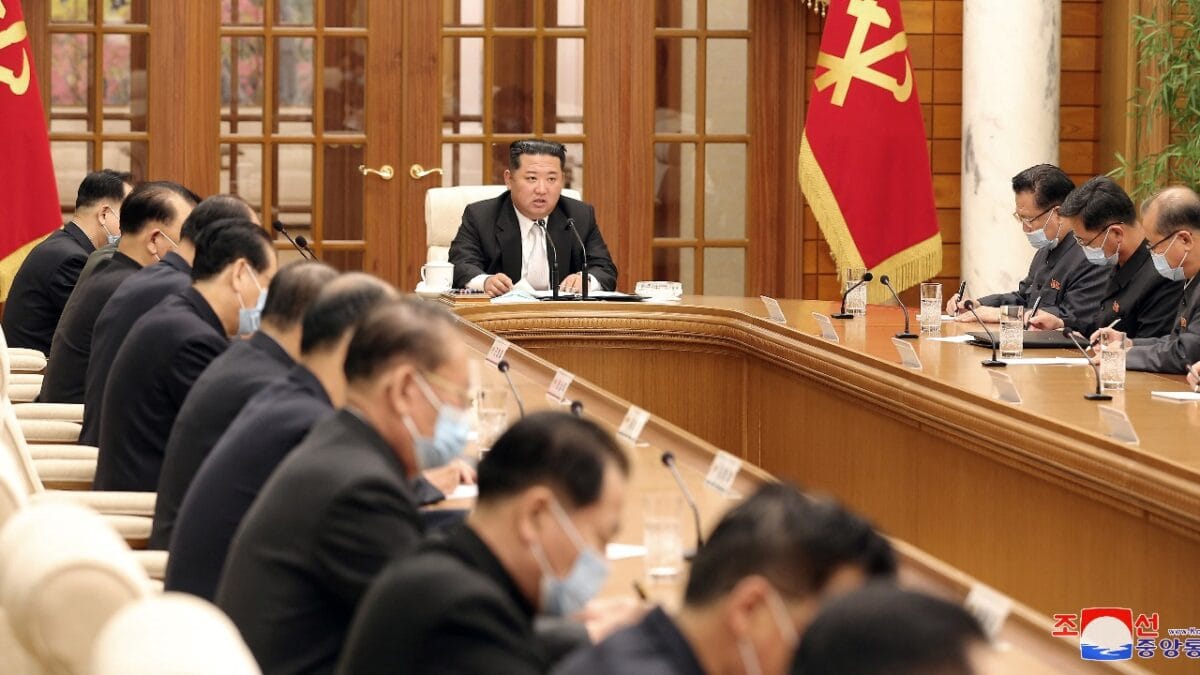 North Korea remains one of the world’s most intractable challenges. However, concern over the North’s geopolitical course should not obscure the human crisis that threatens. A full COVID pandemic could result in a social catastrophe on the scale of the deadly famine of the late 1990s. This is a moment to set politics aside and simply do what is right.