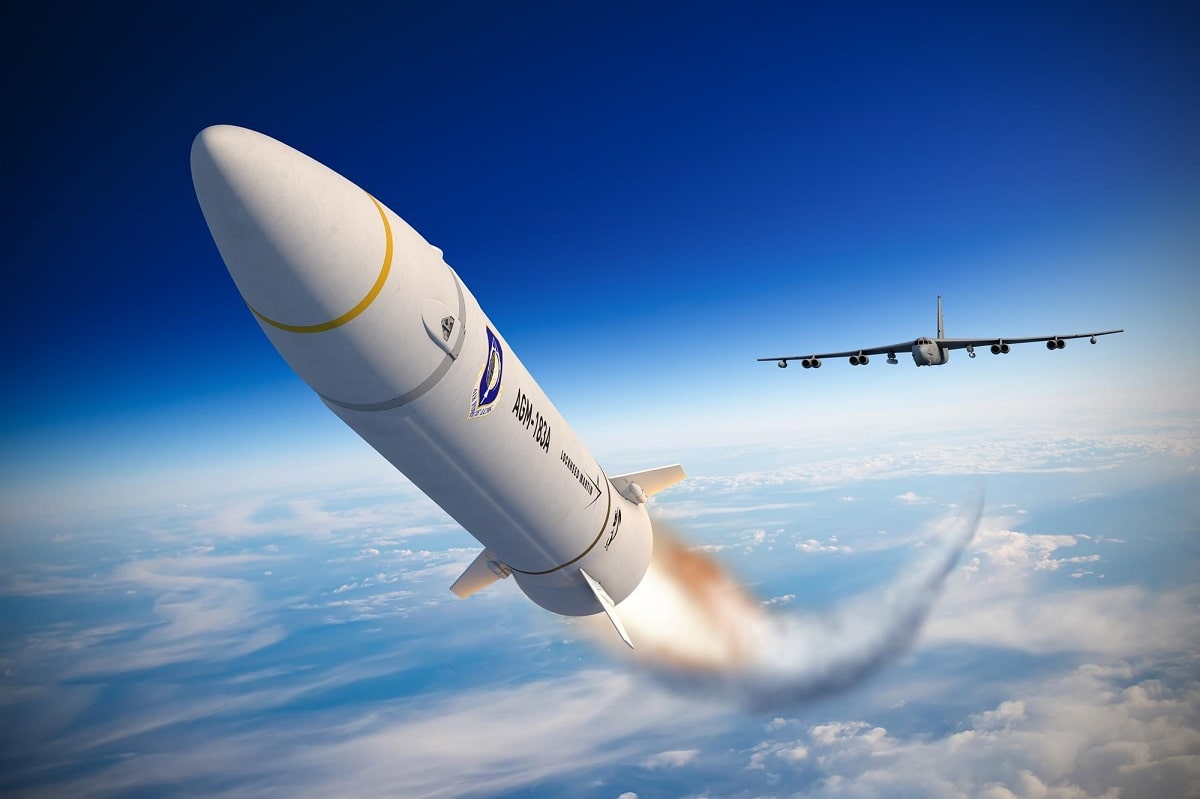 The United States is one step closer to catching up to Russia and China in hypersonic weapon development. The U.S. Air Force successfully tested a hypersonic missile on May 14 that was launched from a B-52H. The test took place over the Pacific Ocean near southern California. The AGM-183A Air-Launched Rapid Response Weapon (ARRW) had failed three previous attempts in 2021.

But this time was different as the missile was released by the B-52H and the booster ignited and burned for a period of time that was considered satisfactory by testers. The ARRW hit MACH 5.

Troubled Program Gets Some Good News

The Air Force finally has something to brag about after having trouble with the weapon in the past. This is especially true when it came to separating from the launcher and passing the ignition phase.

Air Force Program Executive Officer for Weapons Brigadier General Heath Collins spoke optimistically in a news release. “This was a major accomplishment by the ARRW team, for the weapons enterprise, and our Air Force. The team’s tenacity, expertise, and commitment were key in overcoming the past year’s challenges to get us to the recent success. We are ready to build on what we’ve learned and continue moving hypersonics forward,” Collins said.

What Is the ARRW?

The ARRW is a stand-off, boost-glide land-attack missile that is designed to penetrate enemy air defenses by outrunning and outmaneuvering current surface-to-air interceptors. The missile can change course in flight.

The ARRW program has research and development funding for FY23, and this successful test will send a message to Congress that the project is viable. The Air Force spent $300 million on ARRW over the last two fiscal years, and it was on a do-or-die critical path to show progress.

Boost-Glide Tech Is the Way to Go

The ARRW’s boost-glide technology means that the weapon is mounted on a ballistic or cruise missile. DARPA describes a boost-glide as a rocket that “accelerates its payload to high speeds. The payload then separates from the rocket and glides unpowered to its destination,” according to a research description.

Russia and China Have Leapt Ahead

Russia does, however, have a hypersonic glide vehicle called the Avangard that has been tested successfully since 2016. The Avangard is nuclear-capable and like the American ARRW, it is believed to have the ability to evade air defense systems by changing its flight characteristics while in the air.

China has been testing its hypersonic glide vehicle called the DF-ZF since 2014. The weapon has undergone at least nine tests, according to a report by the Congressional Research Service. Again, like the Russians, the Chinese believe that this glide vehicle can evade American air defense systems by maneuvering in flight.

We are entering an era of the hypersonic arms race. The United States is behind the Russians and Chinese, but that doesn’t mean it can’t catch up. The last test of the ARRW gives the Air Force a shot in the arm, but the ARRW has a long road ahead of it. Can it continue to be funded?

The answer is yes. If the Congressional Hypersonic Caucus gets its way. The caucus is headed by U.S. Rep. Mo Brooks from Alabama and Rep. Jim Banks from Indiana. The members want to mount a better effort to keep up with Russia and China.

Rep. Brooks said in a news release, “Hypersonic weapons are our best opportunity to evade complex air defense systems and take down enemy systems that can hold hostage our ability to collect and distribute information, project force, and maneuver in theatre. To be successful in any conflict against a peer adversary, we must be able to field hypersonic weapons.”