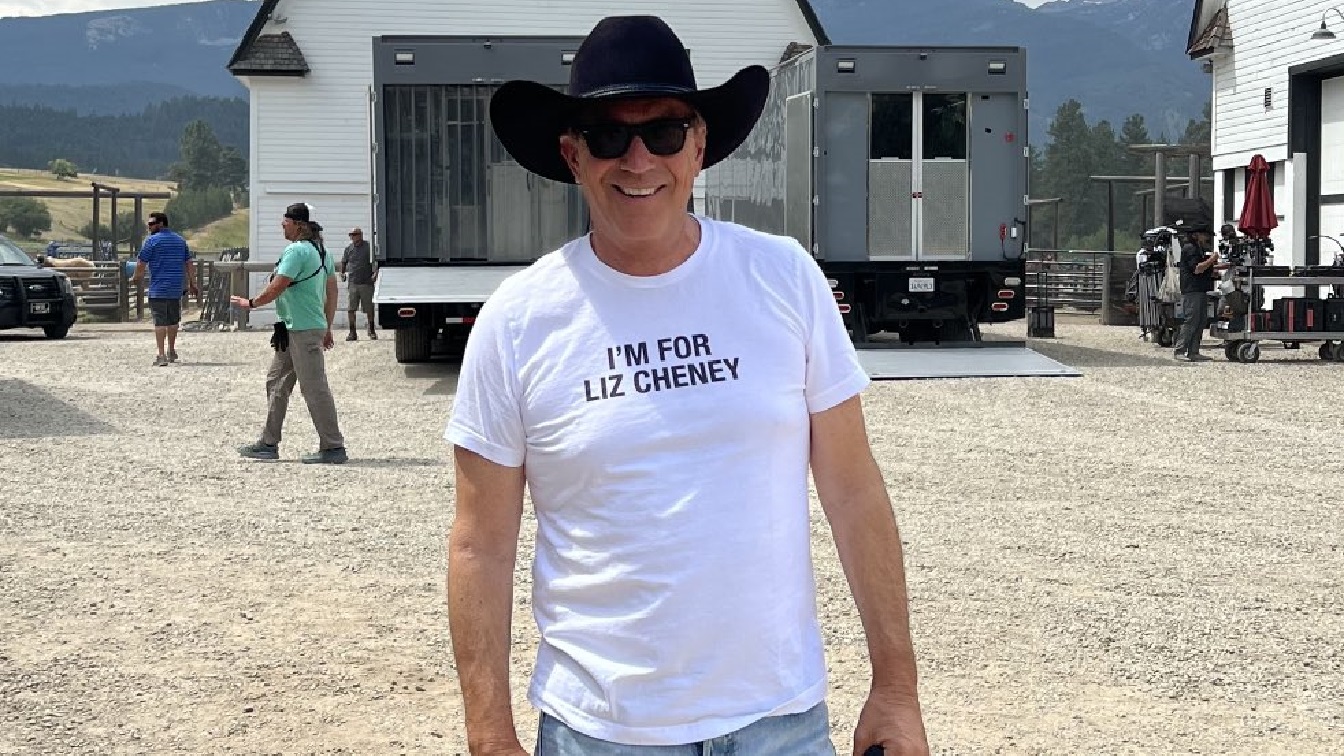 Will Kevin Costner’s Politics Doom Yellowstone? – The season four finale of Yellowstone, which aired in early January, became the most watched cable telecast in the United States since the season eight premiere of The Walking Dead in 2017. The episode attracted some 10.3 million viewers, according to Nielsen’s Live+Same Day figures.

While significantly smaller than the finale of M*A*S*H, which saw 106 million people tune in, today’s TV audience is considerably fragmented, and few shows are able to get even half the viewers of Yellowstone. Yet, despite its popularity with viewers, the show is far from a critical darling – and it failed to receive a single Emmy nomination.

That fact has outraged some fans, but that was before Rep. Liz Cheney (R-Wyoming) tweeted an image of series lead Kevin Costner wearing a t-shirt that said, “I’m for Liz Cheney.” Rep. Cheney captioned the photo, “Real men put country over party.”

Yet, not everyone who shared it was in Cheney’s camp.

A number of edited versions appeared online including those that had the t-shirt read, “I’m for Liz Cheney’s retirement” while another proclaimed “Trump 2024.” One user also shared an image of Kevin Costner shaking hands with late Cuban dictator Fidel Castro.

Cheney was first elected to Wyoming’s at-large congressional district in 2016, and since has often been described as a neoconservative, known for her focus on national security, support for the U.S. military, and pro-business stance. She was also critical of former President Donald Trump’s foreign policy and served as vice chair of the House select committee investigating the January 6, 2021 insurrection.

According to The Hill, ITK Entertainment, which represents Costner, confirmed that it was in fact the actor who appeared in the photo wearing the pro-Cheney t-shirt. However, whether the image had been doctored with the message added remains unclear. Even the fact check website Snopes.com could only confirm that Costner is in the photo, but added that it is still investigating the validity of the image.

A question being pondered is whether a Costner endorsement of Cheney, who faces Harriet Hageman, a Trump-endorsed lawyer in the August 16 primary, would actually help the House incumbent and whether it could hurt Yellowstone’s ratings. It stands to reason there is a very big MAGA audience that watches the program.

However, Costner – who plays a very conservative Montana rancher on the series – has long described himself as an independent.

“I vote for who I think has the best interests of the country and how we sit in the world,” Costner, 67, said in a 2020 interview with The Daily Beast.

“The Democratic Party doesn’t represent everything that I think, and neither does the Republican Party right now — at all,” the actor added. “So, I find it too limiting.”

Costner has also been among the Hollywood elite to call for stricter gun control measures even as he has made a living appearing on screen in dozens of movies wielding firearms. He also admitted that he is a hunter, and does own at least one shotgun.

“My gun’s an heirloom to me and my son, one day, when I’m gone, is gonna know, ‘Your dad hunted with that.’ But, even though with the connection that I have to my gun, can I look at the NRA (National Rifle Association) and say, ‘I think you’re out of line?’ I can say that” the actor had previously told AllWomensTalk.com.

The season five premiere of Yellowstone is scheduled for Sunday, November 13. The question is whether the fans will return in droves once again.