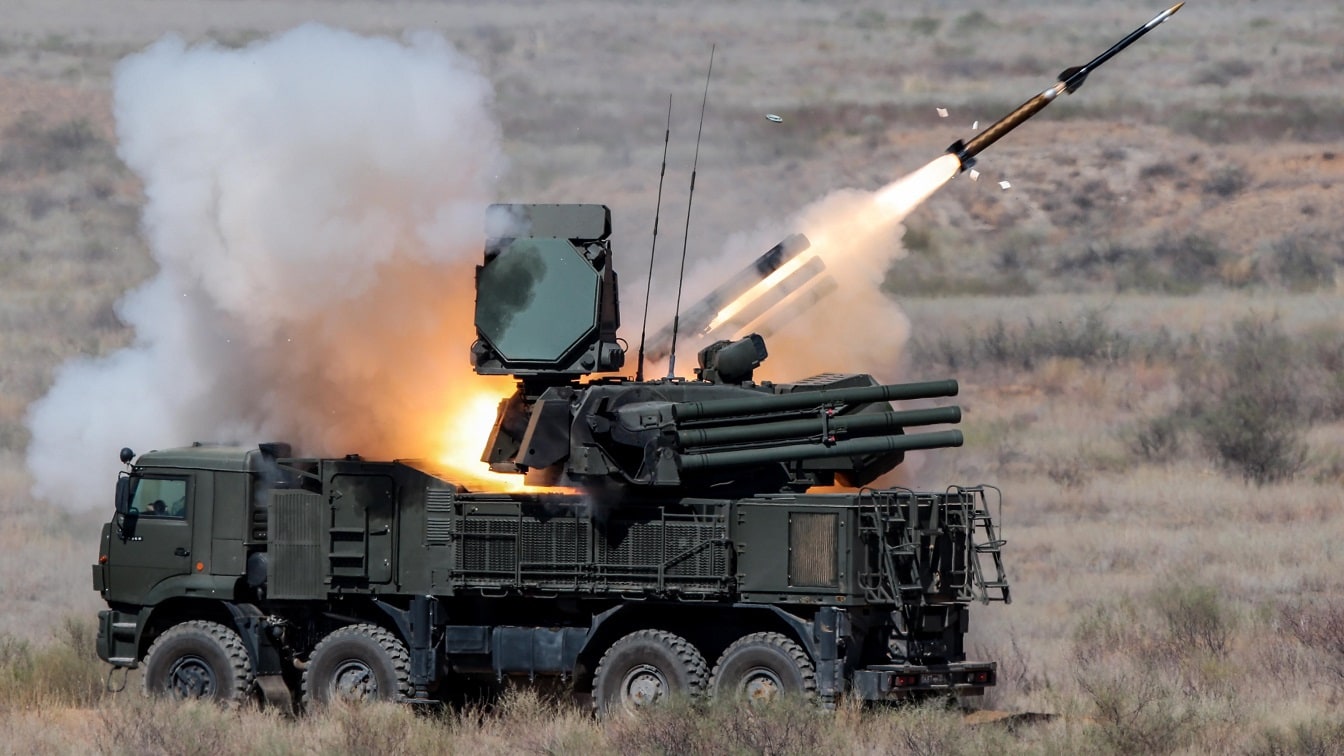 While Russia’s Pantsir missile is supposedly one of its most advanced, its mixed battlefield record has called into question the system’s ability to perform in modern conflict, particularly against drones.

The Pantsir, whose name translates to “shell” or “armor” in English, is one of Russia’s newest air defense systems in existence today. Promoted by Russia’s state-owned arms consortium Rosoboronexport as an anti-aircraft missile and gun system intended to destroy a variety of air targets in motion, the Pantsir was designed by Tula’s KBP Instrument Design Bureau and entered service in 2003. The Pantsir began development in 1989 as a replacement for the 2K22 Tunguska air defense system, but would later have its mission changed to providing protection for long-range air defense systems such as the S-300, S-400, and S-500.

As a system, the basic variant of the Pantsir is known as the Pantsir S, which is designated by NATO as the SA-22 Greyhound. In its basic form, the Pantsir is equipped with two 30mm 2A38M cannons and can carry twelve 57E6 blast-fragmentation missiles or 57E6 continuous-rod fragmentation missiles. The air defense system is usually mounted on the back of an 8 x 8 KAMAZ truck chassis, and can reportedly engage targets at altitudes of 15 kilometers and distances of 20 kilometers, according to Russian sources.

Other and more recent variants include the Pantsir-M, which is designed for naval use, and the Pantsir-SM, which includes improvements to the Pantsir’s targeting and detection range in order to better counter drones such as Bayraktar TB2.

Other new versions of the system which Russia hopes to procure are the Pantsir-SM-SV, which would be tracked instead of wheeled to enable the Pantsir to reach off-road strategic points easier, and another which Russian state media report would sacrifice the system’s cannons in order to double the missile armament of the system to 24 missiles.

Russia has been highly keen on exporting the system to a variety of customers in East Asia, the Middle East, North Africa, and South America. However, this wide proliferation has not necessarily been good for the public image of the system. In 2013, Russian Pantsirs were reportedly first sent to Syria in support of Syrian dictator Bashar al-Assad in the Syrian Civil War. However, it would not be until 2015 that Russia would intervene in Syria in full – which Pantsirs were included in. The Pantsir was also delivered to the forces of Khalifa Haftar, whose Libyan National Army splinter group is supported by Russia. However, these deployments exposed the particular weakness of the system to attack by drones. A 2018 airstrike by Israeli forces on a Syrian-manned Pantsir battery similarly cast doubt on the effectiveness of the system, which Russian military figures variously attempted to blame on the system not being “turned on” at the time of the strike or it being out of ammunition

Pantsirs first appeared in Ukraine shortly after Russia’s 2014 seizure of Crimea and incursion into eastern Ukraine. According to the independent open-source intelligence outfit Bellingcat, Pantsirs were even provided to Russian-backed separatists operating in Donbas. Flash forward to Russia’s 2022 invasion of Ukraine, and Pantsirs have seen decidedly mixed success to date over the course of the invasion. Russia’s state-owned defense corporation Rostec has claimed that the Pantsir has been used to success against drones, aircraft, and missiles. However, Russia has reportedly lost nine Pantsir-S variants over the course of the invasion to date, including three which were captured by Ukrainian forces. Ukrainian sources even claimed in July that a captured Pantsir had even destroyed its first target while in Ukrainian service. Future Russian replenishment and manufacture of Pantsirs will undoubtedly be hindered or at least complicated by U.S. and western technical sanctions on Russia, as captured Pantsirs have been found to contain microchips from a variety of U.S. manufacturers in their systems.

Russian attempts to market the platform abroad will need to overcome serious questions about the system’s combat effectiveness which have arisen from years of questionable combat performances.

In this article:Pantsir, Russia, Ukraine, War in Ukraine