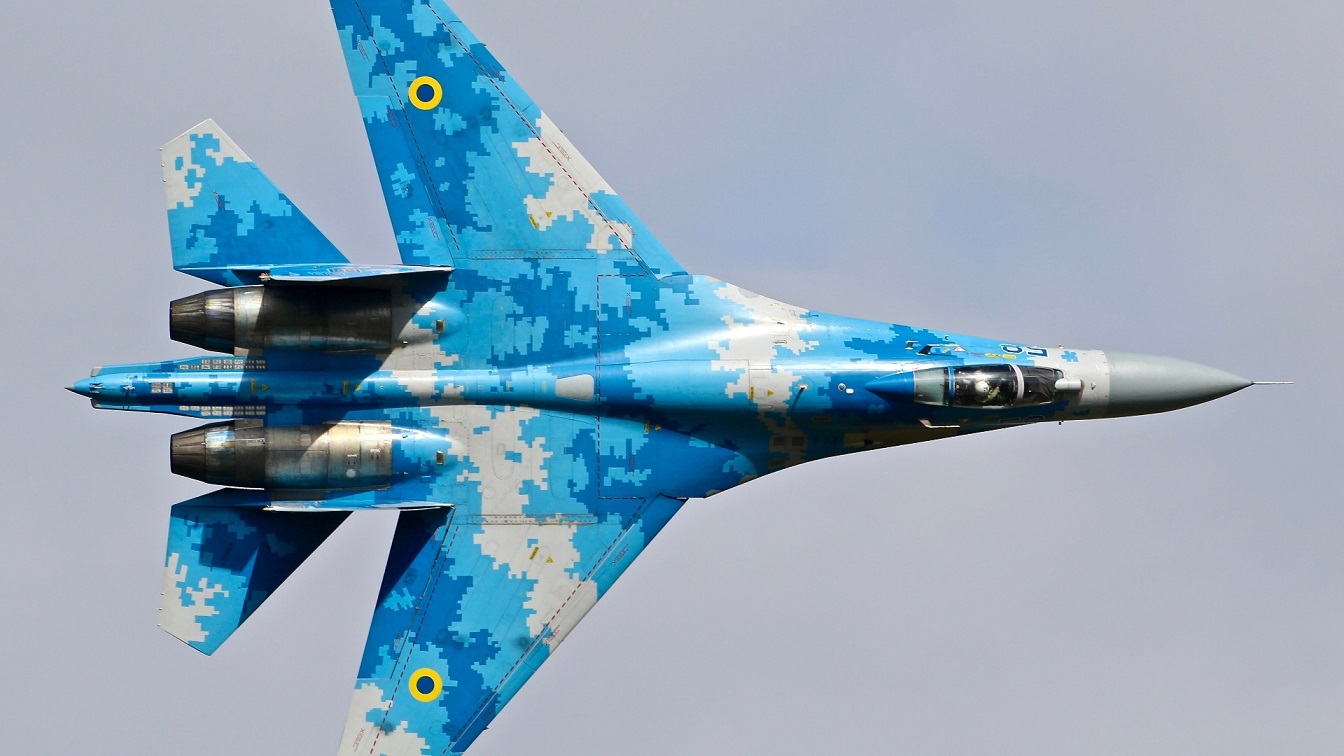 Russia’s invasion of Ukraine has resulted in the most sustained air-to-air combat in decades, pitting the Ukrainian Air Force’s prewar fleet of roughly 110 operational Soviet-era warplanes (not one purchased after the collapse of the Soviet Union) versus roughly 1,200 fixed-wing Russian Aerospace Force (VKS) combat aircraft, many relatively new and the rest extensively modernized.

Many observers (including this writer) believed this imbalance of power would result in a one-sided and short-lived contest when Russia invaded Ukraine on February 24.

But that’s not what happened: the Ukrainian Air Force wisely dispersed prior to the war. The Air Force sustained only modest losses from Russia’s initial airbase attacks. Meanwhile, Ukrainian warplanes were visibly fighting on day one.

A half year later, Ukrainian and Russian fighters continue to joust, mostly with long-range missiles, while both sides’ ground attack aviation remains active at low altitudes near the frontline. After heavy losses early in the war, neither side is willing to penetrate deep into enemy airspace.

A literal dogfight in the skies over Donbas tonight. Ukrainian SU-27 shooting flares toward a guided missile fired by a Russian fighter jet, not caught in this footage. The few residents remaining in Pokrovsk rushed out to gape at the spectacle and applaud. pic.twitter.com/GmJnO7HghR

Nonetheless, losses are heavy, with at least 49 Russian warplanes confirmed lost as of August 30, and 37 Ukrainian. The true numbers are surely higher. But, the majority of verified are attributed to ground-based air defenses, while it’s remained entirely unclear how many fall in air-to-air combat.

This article seeks to identify losses of fixed-wing aircraft attributed to air-to-air combat based on current publicly available evidence. A companion piece looks at the tactical and technical dynamics of the air war over Ukraine.

Historically, all air forces heavily overclaim kills in air-to-air combat. That problem is even worse in a conflict extensively featuring beyond-visual-range missiles, where gun cameras can’t record evidence of a successful kill.

Indeed, on August 30, Russia’s defense ministry claimed Russia’s military had shot down 278 Ukrainian fixed-wing combat aircraft, more than twice as many as were operational in the Ukrainian Air Force prior to the war. Kyiv’s claims of 234 downed Russian jets are also not credible.

This article therefore mostly disregards official claims, and looks only at kills confirmed either by A) self-reported losses; or B) videos or photos proving an aircraft was shot down/destroyed; combined with C) a claim the loss occurred in air-to-air combat. This is a minimal, but hardly ironclad standard as there remains room for misattribution as to the cause of a particular loss.

Understandably, neither side is keen to report their own losses. Grimly, that means loss data chiefly comes from obituaries for pilots killed in combat, or reporting capture of POWs. Implicitly, that means losses of aircraft crashed on friendly territory, or for which the crew survived and were not captured, are going unreported and thus are under-represented.

In the first month of hostilities, obituaries for Ukrainian pilots sometimes mentioned that they fell in air-to-air combat. After March, such details stopped being published, and only a few more possible air-to-air losses can be inferred, usually with unsatisfactory confidence.

Most or all of the Russian air-to-air kills likely involved its single-seat Su-35S fighter and two-seat Su-30SM Flankers, which are assigned air superiority missions. Russia’s MiG-29s have not been deployed in Ukraine, though MiG-31 interceptors and Su-27SM Flanker fighters are apparently playing a limited, mostly defensive role. Russian media claimed a MiG-31 scored the type’s first kill on April 28 downing a Ukrainian Su-24, but did not produce evidence.

Russia’s much-touted Su-57 stealth fighters have reportedly only been used for standoff missile strikes, not air superiority. Technically, the Su-25 and Su-34 can carry air-to-air missiles for self-defense, but there’s little evidence they’re being armed with those missiles.

On the opening day of the invasion, Russian warplanes roved over the skies of Kyiv and carried out mostly unsuccessful strikes on Ukrainian airbases. This set the stage for the following corroborated aerial losses:

Russian airpower was surprisingly scarce in subsequent days, but additional encounters were on February 25 and 28th.

Russian air activity surged the first week of March, with heavy losses on March 3 and 4, near Kyiv and Mykolaiv in southern Ukraine.

Ukraine’s fleet of Su-24M supersonic bombers has experienced extremely heavy losses over the course of the war, with at least 11 confirmed destroyed of 12-14. Two have been attributed to Russian fighters per a pro-Russian source.

On June 5, a Ukrainian Su-27P “Blue 38” of the 39th TAB recorded crashing near Orikhiv by what was initially billed as an air-to-air missiles, but which now appears likely to be friendly fire due to a claim from a nearby Ukrainian air-defense battery.

Between August 12-14, celebrated MiG-29 pilot Anton Listopad of the 204th TAB died in his MiG-29 near Kramatorsk, according to rumor attacked by Su-35 jets.

The cause of two later Ukrainian combat losses—the Su-25 of Oleksandr Kukurba on July 26 and the MiG-29 of Yuri Pohorily—remain unclear:

As obituaries and other media accounts of Russian pilots almost never attribute the cause/circumstances of death, it’s not possible to corroborate Ukrainian air-to-air claims from these sources.

Furthermore, every Russian aircraft loss visually documented by Ukraine forces is attributed to ground-based air defenses not fighters, as far as this author could find.

However, some documented combat losses in Ukraine lack an attributed cause, and some crashed Russian warplanes have been discovered in remote areas months after they were apparently shot down, leaving causality unclear.

Below is a list combat losses of Russian fixed-wing jets for which the author could find no specific cause attributed:

It’s not certain any of these were lost in air-to-air combat, especially as ground-based air defenses appear responsible for the lion’s share of losses. But given the circumstances of beyond-visual-range air-to-air combat, aerial kills may be less likely to be visually documented.

There are other prominent claims that don’t pass scrutiny. An Il-76MD transport plane full of paratroopers was reported shot down near Vasylkiv by an Su-27 on Feb. 25—but no wreckage was ever found.

Another video supposedly shows a dogfight between a Ukrainian and Russian Su-25 (with the latter downed) but likely just shows two Ukrainian Su-25s returning to base, one releasing defensive flares.

It was shot-down near #Kyiv this morning! The fifth lost Su-25SM ground attack aircraft of #RussianAirForce in #Ukraine war is identified as RF-91969/ 10 Red. It belonged to 18th Guards Red Banner Assault Aviation Regiment in #Chernigovka. https://t.co/5MTtW3RB4B pic.twitter.com/ZBkm2tOU2e

While outside the scope of this survey, fixed-wing aircraft aren’t the only concern of air-to-air combat.

Attack and transport helicopters are also valuable and highly vulnerable targets of opportunity for faster fixed-wing aircraft. Notably, an Su-35 was recorded attempting to gun down a Ukrainian Mi-14 utility helicopter over Odessa Bay, only to miss. Subsequently, it downed the chopper with a missile, killing a high-ranking naval officer.

This is reportedly video of a Russian fighter attempting to shoot down a Ukrainian Mi-14 helicopter in Odesa Oblast. The Russian source claims the helicopter was shot down with an R-73 air-to-air missile on the next pass.https://t.co/OsSmfMqVJQhttps://t.co/5wkBucElDW pic.twitter.com/UQ8Oyz9x9o

It’s essential not to over-extrapolate from an incomplete dataset drawing on deeply selection-biased sources. However, it does suggest the technical advantages of Russian fighters (especially long-range radars and fire-and-forget missiles) are working in their favor.

Nonetheless, both sides’ aviation operations are geographically constrained by the robust ground-based air defenses of the other. On the balance, that means Russia’s air force can’t press its advantage into Ukrainian-defended airspace to claim air superiority. That allows Ukraine’s air force to continue flying and impose costs on a foe with a larger number of more advanced warplanes.