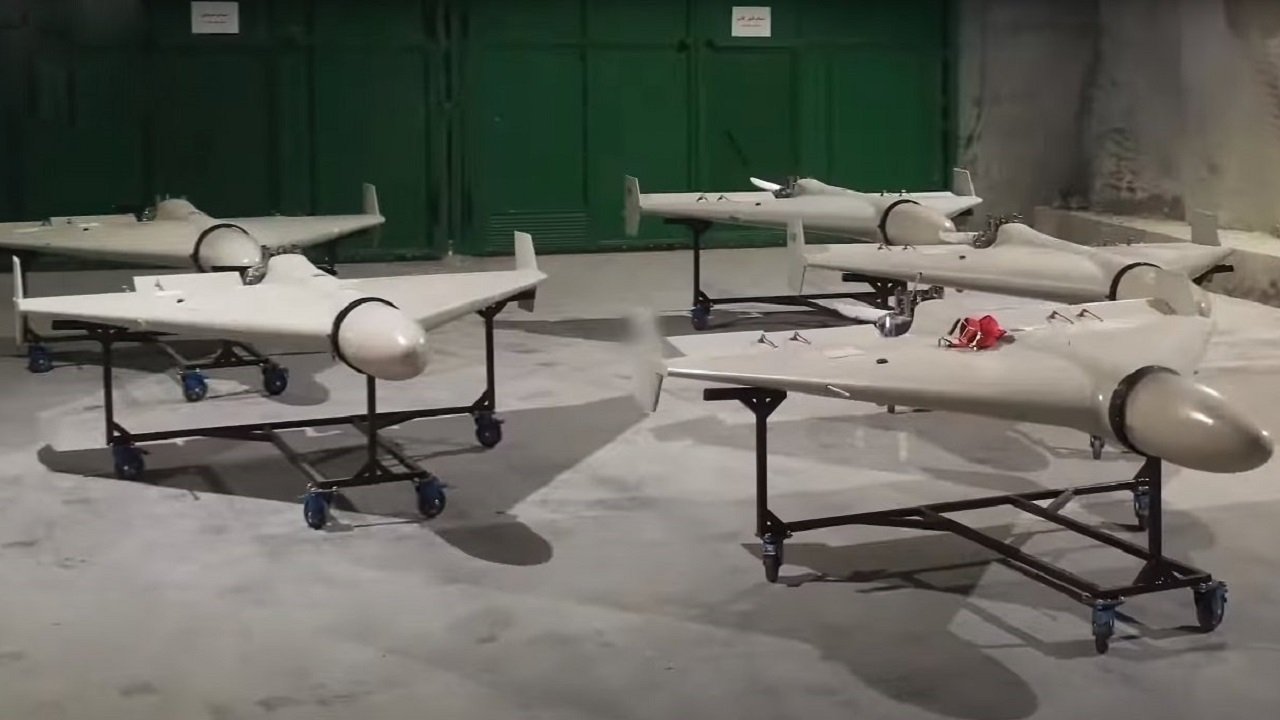 Shahed-136 kamikaze drones, explained: Since mid-September, a new aerial menace has begun harrying the Ukrainian people—explosive-laden kamikaze drones imported from Iran by Russia. The noisy flying-wing aircraft traverse hundreds of miles before nose-diving into civilian and military targets across Ukraine. Together with harder-hitting cruise missiles, they’ve knocked out one-third of Ukraine’s power plants leaving millions in the dark and cold.

These Shahed-136 kamikaze drones built by Iranian company HESA are hardly state-of-the-art compared to expensive hypersonic weapons being developed by Russia and the United States. But they’re so cheap Russia can launch dozens every day, with Ukrainian intelligence claiming Russia is ordering an additional 2,400 beyond the hundreds delivered earlier this summer.

The Shaheds are no war-winning wonder weapon, but they have the potential to cause significant destruction and harm—and forecast disruption of offense/defense balance in future armed conflicts.

Russia has launched well over 200 Shahed-136s at Ukraine. Possibly just one out of every five makes it to target.

The first Shahed-136 was downed in Ukraine’s Kharkiv oblast in September. Afterward, a Ukrainian commander told the Wall Street Journal the kamikazes had knocked out four artillery systems and two APCs there.

But a week later, Russia began using Shaheds differently to assail civilian infrastructure in southern Ukraine, and then, after deploying dozens to Belarus, attacking Kyiv and cities in central and western Ukraine starting October 10.

Compared to the reportedly “several hundred” Russian-built Zala KYB and Lancet kamikaze drones used earlier in the war, the Shahed-136 has a much greater range (some figures questionably claim 1,100-1,600+ miles) and employs a much larger warhead. That allows them to be used for strategic attacks.

Molfar, a collective of open-source intelligence analysts named after traditional Carpathian diviners, has tabulated data for 208 Shahed attacks by October 17, of which 161 (79 percent) were claimed intercepted. By the 19th, the number claimed destroyed rose to 223.

That’s a high kill rate if accurate but still means 47 struck targets in Ukraine with their 66- to 88-pound warheads. Here’s why so few make it to target—and why they still pose a deadly threat.

They sound like a lawnmower and fly at the speed of a World War I biplane.

The Shahed-136 has a maximum speed of 115 miles per hour, nearly identical to that of a Sopwith Camel biplane fighter in World War I. That means it takes time to reach distant targets and is vulnerable to short-range anti-aircraft weapons.

The drones’ Chinese-built 50-horsepower piston engines are audible miles away, leading Ukrainians to nickname them ‘mopeds’ or ‘lawnmowers.’ That means they’re unlikely to surprise their targets, though the racket does induce stress and terror over broad areas.

On the other hand, the Shahed’s small size and radar cross-section (estimated here to average .01 square meters), very faint heat signature, and ability to fly very low does increase difficulty of detecting and hitting them from longer distances.

Shahed-136s are variously estimated to cost $20,000, or $30,000 to $50,000. Perhaps that variance results from some Shahed-136s coming with more sophisticated guidance options than others. But even the highest figure is a tiny fraction of the price of a typical land-attack cruise missile. The U.S. pays roughly $2 million per Tomahawk cruise missile.

But Russia’s cruise missiles also suffer heavy losses to air defenses—and there are now thought to be only around 500 hundred left, with capacity only to build around 20 each month. Thus, Russia’s military likely wants to expend remaining missiles more frugally in case it has to fight NATO. Afterall, Moscow seemingly can purchase between 10-40 Shahed-136s for the price of a single cruise missile!

… but they can be expensive to shoot down.

But such point defense weapons inherently have limited reach and can’t protect every place. They can also be overwhelmed by numbers as Russia often launches dozens of Shahed-136s simultaneously. Therefore Ukraine’s military tries to thin out approaching Shahed-136s using more powerful long-range missiles.

#Ukraine: For the first time ever on camera, a Russian Geran-2 (Iranian Shahed-136) loitering munition was shot down by Ukrainian Air Defenses over Dnipropetrovsk Oblast.
We can observe a munition intercepting it from the left side, likely a short-range missile. pic.twitter.com/QZokSGJzD5

Drawing from a subset of data, Molfar estimated Ukraine expended $28 million worth of anti-air munitions shooting down $350,000-$800,000 worth of Shahed-136s. That ratio poses a vexing challenge, as Kyiv can’t afford to use up its best anti-air missiles given other Russian threats. And missile batteries firing at Shahed-136s risk exposing their position to follow-on air defense suppression attacks.

They’re made of paper, resin and wood.

The Shahed-136’s designers minimized cost and weight by using a wooden two-blade pusher propeller and constructing the flying wing out of paper hardened by immersion in synthetic formaldehyde resin. The resulting material (called Getinax, FR2, phenolic paper etc.) is rigid enough for machine drilling, and is commonly used in circuit boards. These materials also happen to be less radar-reflective than metal, reducing radar signature.

Not only does low weight (440 pounds) equal greater range and speed, but a rack of five Shahed-136s can be strapped onto a civilian vehicle and rocket-boosted into the sky, transforming a pickup truck into a mobile guided multiple missile launcher of sorts.

They’re as blind as a bat—and rely on GPS!

Russia’s Shahed-136s lack any external optics and therefore can’t be remotely piloted. Rather, they fly along a sequence of geographic waypoints guided by satellite navigation, either GPS or Russia’s GLONASS satellite network.

Satellite navigation signals can be jammed, reducing accuracy, but the Shaheds have a backup inertial navigation system to stay roughly on course until they can reacquire the satellite signal. Overall, the -136s are more like slow, piston-engined missiles than a typical kamikaze drone.

Though lacking a transmitter, Shahed-136s can receive updated commands and waypoints, such as being instructed to attack a newly located target. To facilitate such flexible use, they can be ‘buddied up’ with reconnaissance or UCAV combat drones that do have sensors, allegedly including Russia’s ubiquitous Orlan-10 recon drones, and armed Iranian-supplied Mohajer-6 and Shahed-129s. Buddy drones can locate targets for the -136s, which can then be instructed to attack freshly acquired coordinates.

Admittedly, some Shahed-136s do appear to have cameras, infrared, or radar-homing seekers fitted in the nose, particularly for guidance against moving targets. It’s unclear whether any of Russia’s are so equipped.

Russia uses the designation Geran-2 for its Shahed-136 drones. It also is using its smaller predecessor model, the Shahed-131 (range 600 miles, 33-pound warhead) under the Geran-1 designation.

Recently, Russian official scornfully insisted in the UN the Gerans were built domestically. Iran claims it hasn’t exported any arms to Russia whatsoever.

But nobody is fooled, least of all a Russian defense analyst who accidentally admitted the truth on public TV on a hot mic.

Pundit who doesn’t realise he’s already live on TV: We won’t rock the boat, so I beg you not to focus too much on the Iranian […] because we all know they’re Iranian, but the authorities haven’t admitted it pic.twitter.com/0hf0RlfKer

In fact, Russian media has alternated between praising Iran’s drones and denying they’re Iranian in origin.

Tehran’s protestations are particularly rich given its foreign minister condemns arms deliveries to either side and argues “… we do not consider war to be the right path …” One suspects professed pacifistic sentiments did not withstand the allure of promised repayment, rumored to include Su-35 fighters and/or other military technologies coveted by Tehran.

Russia will eventually mass-produce their own Gerans. Just not yet.

But it likely will begin churning them out before long given the Geran-2’s perceived utility and low cost. Some sources claim Russian factories may be able to build a dozen Gerans daily, though acquiring sanctioned microelectronic and engine components abroad, or devising domestic substitutes, could slow that down.

Still, Russia has developed indigenous spinoffs of reverse-engineered foreign weapons before, including the Tu-4 bomber (based on force-landed American B-29s) and the missile-armed Forepost-R drone based on imported Israeli IAI Searcher II reconnaissance UAVs.

Samuel Bendett, an expert on Russian unmanned systems at the CNA and CNAS think tanks, said in an email “… as Ukrainian defenders become more sophisticated in shooting down Shaheds, Russians would want to navigate around such capabilities. This also means enabling these drones with additional capacity to get to and observe the target, such as adding cameras.”

“Overall,” he concludes, “given how Russians now claim it’s their own product, expect to see Russian military/industry to build on the Shahed technology to produce something uniquely Russian downrange.”