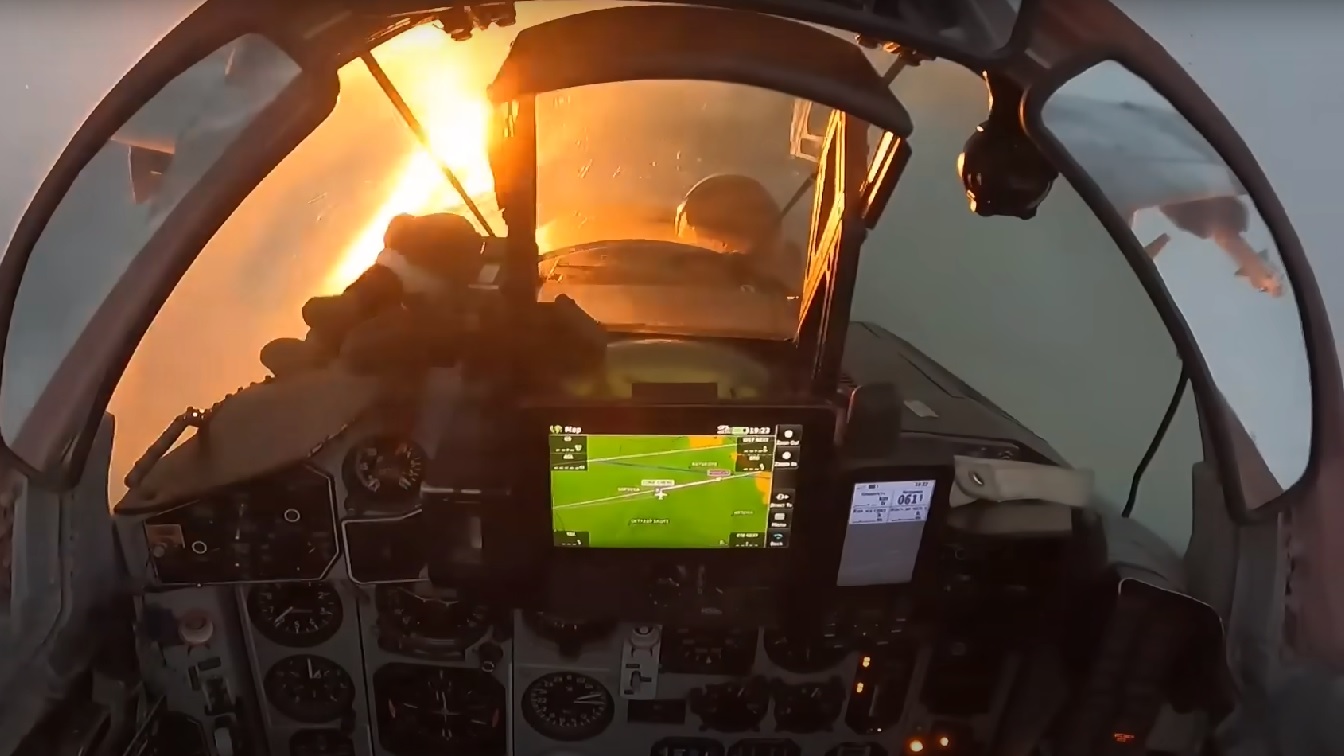 The war for air superiority in the skies over Ukraine has primarily pitted the last generation of Soviet-era jets serving in Ukraine’s air force—the Su-27S Flanker-B heavy fighter and lighter MiG-29S 9.13 Fulcrum-C—against the latest incarnations of the former aircraft in Russian service, the two-seat Su-30SM Flanker-H and single-seat SU-35S Flanker-E multi-role jets.

In this article we will look at the technical advantages Russia’s jets have over Ukrainian aircraft in terms of sensors and weapons—and how those edges have, and haven’t, influenced the air war over Ukraine.

Even early-model MiG-29s and Su-27s were famous for their maneuverability, able to perform jaw-dropping post-stall maneuvers such as Pugachev’s Cobra.

However, both Russia’s Su-30 and Su-35 Flankers have improved on that by incorporating thrust-vectoring AL-31F and AL-41F1S engines respectively that can tilt the nozzles to achieve even higher angles of attack and tighter rolls.

Theoretically, Russia’s Flankers should have an edge in within-visual range (WVR) dogfight. However, dogfights may not be happening very often, as discussed below.

Neither the Flankers nor the Fulcrum are stealth aircraft. However, Russia’s later Flankers incorporate radar cross-section reductions, moderately shaving down radar detection range.

The Su-35’s N035 Irbis-E passive-electronically scanned array radar is extraordinarily powerful, and when focusing on a narrow 10-degree arc, can detect a MiG-29 at over 200 miles. Practically-speaking, its area-search and fire-control modes are effective at shorter distances. It has a ground-scanning synthetic aperture mode, but at relatively low resolution of 1 or 3 meters (compared to .1 meters on the latest F-16Vs), allowing detection of destroyer-class ships at 60 miles.

The Irbis-E is less stealthy and more vulnerable to jamming than AESA-class radars on modern Western fighters. The Su-30SM’s older N011M Bars and Su-27S’s N011 have progressively reduced performance, and the smaller-aperture N019M on the MiG-29 has greatly reduced capability.

All late-Soviet and Russian fighters incorporate combined laser and non-imaging infrared-search and track (IRST) sensors, offering a shorter-range passive sensor that doesn’t expose the user like an active radar does. Those on Flankers substantially outperform the KOLS system on the MiG-29.

.@MotolkoHelp reported that two Russian Beriev A-50U "Mainstay" radar aircraft (🇷🇺RF-93966 and 🇷🇺RF-94268) were seen operating out of 🇧🇾Baranovichi Air Base in Belarus over the past week.

Head-to-head, Russian jets have far more powerful sensors than their Ukrainian adversaries, particularly the MiG-29s. One pilot told Congress that by the time Ukrainian jets detect Russian fighters, they often have already been fired upon.

To protect against incoming radar-guided missiles, the Su-35S can carry L-265M Khibiny-M10 electronic countermeasure pods on wingtip rails to jam incoming missiles by identifying and mimicking their guidance signals (known as Digital Frequency Radio Memory, or DFRM). The Su-30SM instead mounts a single, possibly solid-state, Khibiniy-U pod under its fuselage.

DFRM jammers may be ineffective against Western frequency-hopping AESA radars and vulnerable to anti-radar missiles. That shouldn’t matter countering Ukraine’s Soviet-era missiles, but Russia nonetheless plans to further automate the Khibiniy based on experience over Ukraine.

Ukrainian Su-27s and MiG-29s use the L-203 Gardenia jammer (MiG-29 in a prominent ‘hump’ behind the cockpit, Su-27 in two underwing pods) which protects +/- 60 degree arcs in the front and rear by disrupting ranging signals for radio-guided weapons. A few have received modern domestic Omut-KM DFRM-style jamming pods with more diverse capabilities.

Russian jets with Khibiniy jammer are more likely to neutralize an incoming radar/radio-guided missile than the less powerful and versatile L-203 on Ukrainian aircraft, though Omut-equipped aircraft may be comparable in effectiveness.

In addition to an internal 30-millimeter autocannon, both the Su-30SM and Su-35 have twelve hardpoints on which to externally mount weapons, fuel tanks and pods. A MiG-29S has seven hardpoints (with range more greatly impacted by heavy payloads) and an Su-27 has ten.

Both Ukraine and Russia use short-range R-73 heat-seeking missiles which can be targeted away from the aircraft’ nose using a helmet-mounted sight. However, the R-73s may be so effective that pilots are discouraged from risking mutual-destruction by merging in a head-on-pass.

The Su-30SM and Su-35S also employ R-77-1 missiles to engage adversaries from beyond visual range. These have built-in active radar seekers, so the launching aircraft can “fire and forget” without maintaining a radar track.

Due to shortages of R-77s, Russian Flankers still also use older medium-range heat-seeking R-27ET and long-range R-27ER missiles, as do Ukraine’s Su-27s and MiGs. Traditionally Soviet pilots were trained to launch two missiles at once, one heat-seeking and the other radar-guided, to increase odds of a kill.

Indeed, according to military aviation historian Tom Cooper, Russian pilots are reportedly firing R-77s from maximum range (even if probability of hitting is low) and disengaging to deny Ukrainian jets an opportunity to retaliate. You can see the HUD of an Su-35 launching an R-77 at Ukrainian jets from beyond-visual range at :31 in the video below.

While the radar-guided R-27ER model theoretically matches the R-77’s range, it lacks an internal radar and depends on the launching aircraft’s radar for homing. That means the pilot must keep his plane’s nose-mounted radar illuminating the target (and in a sense his own plane!) until the missile reaches it.

As a result, Ukrainian pilots reportedly prefer using the fire-and-forget heat-seeking R-27ET. But according to Cooper, several Ukrainian jets have shot down attempting to close within the shorter range needed to employ the R-27ET, though it is reportedly preferred for shooting down helicopters.

The R-27 generally doesn’t have a great combat record. In 1999, an air war involving Ethiopian Su-27s and Eritrean MiG-29s (and Russian and Ukrainian mercenary pilots) up to 27 R-27 missiles were fired by both sides. Only one hit, while short-range R-73s hit 55% of the time.

Russia’s Flankers have significant edges one-on-one versus Ukrainian fighters thanks to their long-range radar, R-77 missiles, and support from A-50 AWACS aircraft. Furthermore, Ukrainian pilots claim it’s not uncommon for one or two Ukrainian fighters to spar with 12 or even 24 Russian Flankers. The presence of long-range ground-based S-300 and Buk-M3 SAMs threaten airspace uncomfortably close to Ukrainian bases, forcing low-altitude operations to avoid detection.

These disparities are reflected in confirmed losses of Ukrainian fighters and veteran pilots. But it hasn’t given Russia functional air superiority.

That’s because Ukraine’s fighters are just a supporting component of Ukraine’s integrated air defense system, alongside ground-based radars, missile batteries and command posts. These direct Ukrainian jets on patrol or alert to reinforce air defenses where necessary, “push” Russian aircraft back by threatening interception, or to attempt interceptions of cruise missiles, drones and occasionally helicopters. As threats converge on the Ukrainian fighters, they fall back to nearby bases.

Russia’s more numerous and advanced jets could in theory hound them back to base (possibly locating concealed secondary bases and improvised runways) and destroy them while landing or on the ground. But—save for the initial days of the war—they aren’t because of the persistent threat posed by Ukraine’s ground-based defenses.

Meanwhile, Russian cruise and ballistic missile attacks on Ukrainian airbases and air defenses have been only modestly effective due to Ukrainian dispersal and decoy tactics, though early strikes on fuel depots and parts manufacturing facilities may have done more to impair Ukrainian aviation.

Neither side’s air superiority operations have prevented the other’s ground-attack aircraft (Su-24s, Su-25s, and Russian-only Su-34s) from ground attacks on frontline targets, though losses are heavy for both sides—primarily it appears due to ground-based defenses. However, were Ukraine to acquire Western F-16 or Gripen jets with modern AESA radars and AIM-9X and AIM-120 missiles, these would disrupt Russia’s modus operandi over Ukraine.

Analysis of Russian Airpower Deployment in Ukraine by Guy Plopsky