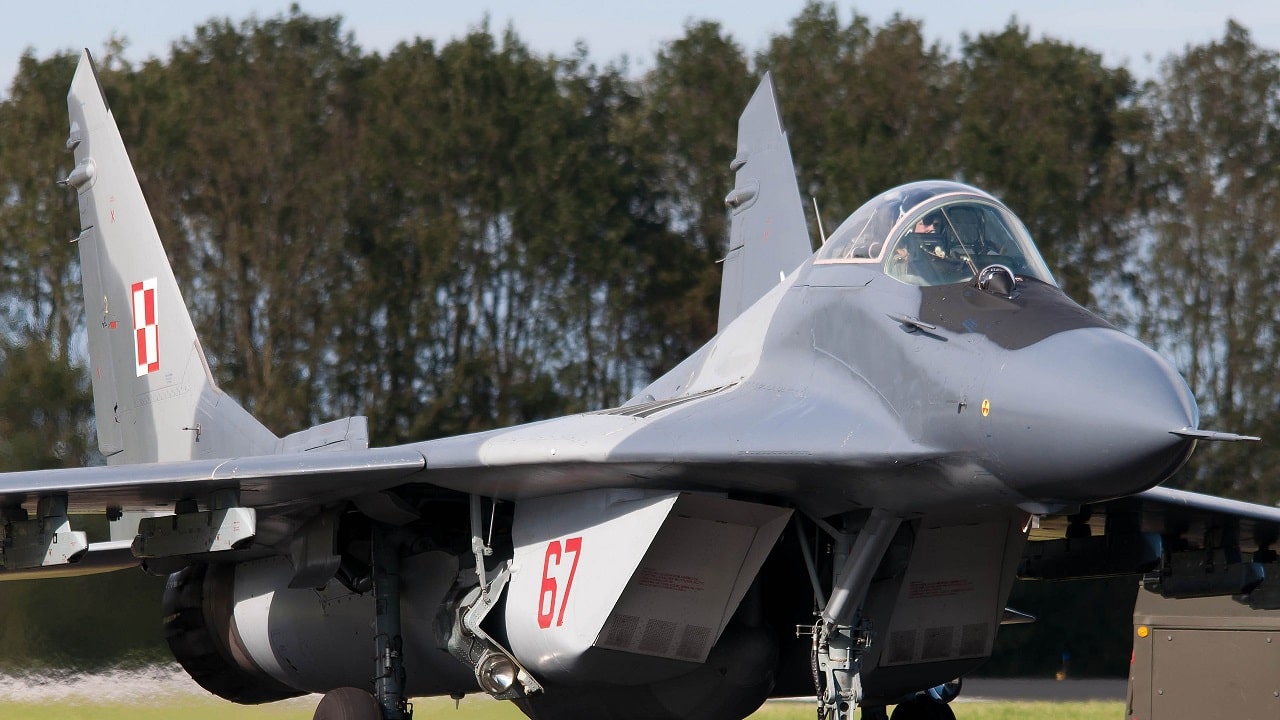 How Ukraine could get more MiG-29 fighters – In a press conference concerning the European Union’s unprecedented plans to provide up to 450 million ($500 million) in military assistance to Ukraine as it combats a Russian invasion, the organization’s High Representative for Foreign Affairs Josep Borrell dropped a bombshell:

“We are going to provide even fighting jets. Minister Kuleba has been asking us that they need the kind of fighter jets that the Ukrainian army is able to operate. And we know what kind of planes, and some member states have these kind of planes.”

Sales or donations of jet fighters ordinarily years to arrange, as they require passing export controls and long-term investments in maintenance capabilities, spare parts inventories, and pilot-training pipelines. But as Borrell’s words suggested, Europe might be able to rush that process by giving jets Ukraine’s air force already is trained and equipped to fly.

The MiGs of NATO

Though Borrel did not elaborate, he was almost certainly a reference to transferring MiG-29 Fulcrum fighters operated by three EU member states. Ukraine’s two MiG-29-equipped Fighter Brigades, the 114th at Ivano-Frantisek and the 40th at Vasylkiv, have certainly been recorded flying in action over Ukraine, and Russian forces recently attempted to capture the base at Vasylkiv in a failed parachute landing operation.

The twin-engine MiG-29 was developed by the Soviet Union late in the Cold War to be a cost-efficient short-range “tactical fighter” for basing on the border and robust enough to operate from crude frontline airstrips. Like the conceptually similar (though single-engine) U.S.-built F-16, it also was exported widely abroad.

The Fulcrum is highly maneuverable and can use the deadly R-73 short-range heat-seeking air-to-air missile which can be targeted “of-boresight” by the pilot using helmet-mounted sight without having to point the aircraft’s nose at the target. Bit early Fulcrums are hampered by low-quality R-27 medium-range air-to-air missiles, limited range/endurance and payload, and relatively weak radar, making pilots highly dependent on directions from ground controllers. The MiG-29 has fared poorly in air battles over Ethiopia/Eritrea, Iraq, Syria, and Serbia against F-16 and heavier F-15 and Su-27 jets.

The Polish Air Force currently operates 21 MiG-29A and 6 two-seat MiG-29UB fighters, many of which formerly served in the East German and Czechoslovakian air force. These have been extensively modernized with U.S.-built avionics, including GPS, Radar Warning Receivers, tactical navigation systems, and radios. Roughly half (16) have been further updated with modern mission computers, data buses and digital displays. However, three Polish MiG-29s were lost in crashes between 2017-2019, one of them fatal.

The Bulgarian air force operates 11 single-seat MiG-29s and three two-seaters, though a much smaller number are in flyable condition.

The Slovakian air force flies nine MiG-29As and two two-seat MiG-29UBs which have been maintained by Russian technicians.. These aging early-model MiG-29 9.12s were refitted in the 2000s with NATO-compatible navigation, communications and IFF systems and digital glass cockpits.

Of these three options, Poland seems the most likely to donate its jets. Slovakia and Bulgaria’s MiG-29s account for most of the fighting strength of their Air Forces, while the Polish Air Force is much bigger, and its MiGs are due to be replaced by vastly more capable F-35A stealth fighters in 2024. Poland is also arguably the country most keen on supporting Ukraine. That said, Slovakia and Bulgaria also plan to replace their MiGs with F-16s in 2023 and 2025.

One EU official seemingly implied to a Washington Post reporter that all three countries might furnish Fulcrums, but Bulgaria’s prime minister Kiril Petkov simultaneously stated no Bulgarian MiG-29s would go to Ukraine due to the lack of replacements.

Because the MiG fleets rely on parts ordinarily only available from Russia or Belarus, they are all relatively difficult to maintain and due for retirement in the next decade. Thus passing them on to Ukraine at the expense of their own air power might be deemed more tolerable, especially if delivery of replacement fighters can be accelerated to compensate. Indeed, Jane’s says there are unconfirmed reports the U.S. might “backfill” any donated MiG-29s with F-16s delivered presumably faster than originally planned.

Former MiG-29 operators Hungary and Romania may potentially have some MiG-29s in storage, though these would likely require extensive revamping to make flyable.

The Soviet counterpart to the U.S. A-10 Thunderbolt jet, the Su-25 is a comparatively slow and heavily armored ground attack jet. Bulgaria has 12 Su-25Ks and two two-seat Su-25UB trainers at Bezmer airbase.

Six Su-25Ks and two Su-25UBKs were upgraded by Belarus in 2019-2021 at cost of $24.3 million for service life extension with overhauled engines, new GPS-enhanced navigation systems and radios, head’s up and digital cockpit displays, and integration of S-13 rockets and R-73 short-range air-to-air missiles.

Given Bulgaria’s intent to hold on to its MiGs, it seems even less likely to give away Su-25s it only recently upgraded, and which allegedly have proven cost-efficient to operate. Besides, the Su-25’s ground attack capabilities are likely of lesser priority to Ukraine than acquiring fighters that can threaten roving Russian aircraft.

It has also been suggested that some Ukrainian pilots might still have proficiency with older Soviet MiG-21 fighters and Su-22 supersonic attack jets flown by Romania and Poland respectively, though Ukraine integrating a new aircraft type seems unlikely.

In an earlier article, the author expressed doubts about investing in Ukraine’s air arm (versus other branches) when it seemed likely to be destroyed on the ground early in a war with Russia. But remarkably, that didn’t happen perhaps due to a combination of unexpectedly poor Russian targeting and good dispersion and concealment by Ukraine of its aircraft. Furthermore, Russian fighters appear to have flown relatively few air superiority patrols to protect cover against Ukrainian air power.

Therefore, Ukraine’s warplanes, attack helicopters and drones have managed to fly sorties for at least the first four days of combat operations. The UAF has also received deliveries of R-27 and R-73 air-to-air missiles, most likely shipped from Poland by cargo aircraft.

Under these circumstances, it looks like Ukraine’s Air Force might be worthy of investment, at least of the sort that can be fielded rapidly.

But Ukraine must still hold out long enough for the fighters to get there, and maintain some airbases in operational condition (probably in western Ukraine) despite Russian strikes. That may be accomplished by operating jets from highways instead of airfields, though at reduced operational efficiency. But despite the UAF’s remarkable endurance so far, it’s hardly guaranteed it will remain functional after another week of combat.

Ukraine hopefully has spare trained MiG-29 pilots, but they ideally should still perform a few training flights prior to entering the fray to familiarize themselves with the avionic upgrades that would have been fitted to any EU-supplied jets. Such training flights would preferably be undertaken abroad in Poland or Romania to avoid Russian anti-air capabilities.

Overall, it’s uncertain that any EU-supplied MiG-29s can be transferred into service fast enough to help Ukraine. But if the EU acts with unprecedented speed, and Ukrainian forces manage to stall the Russian offensive long enough and maintain secure and functional airbases in Western Ukraine (which also requires holding that territory on the ground!) an infusion of new MiGs will surely prove welcome and may create complications for Russia’s air war.

Sébastien Roblin writes on the technical, historical, and political aspects of international security and conflict for publications including the 19FortyFive, The National Interest, NBC News, Forbes.com and War is Boring.  He holds a Master’s degree from Georgetown University and served with the Peace Corps in China. You can follow his articles on Twitter.