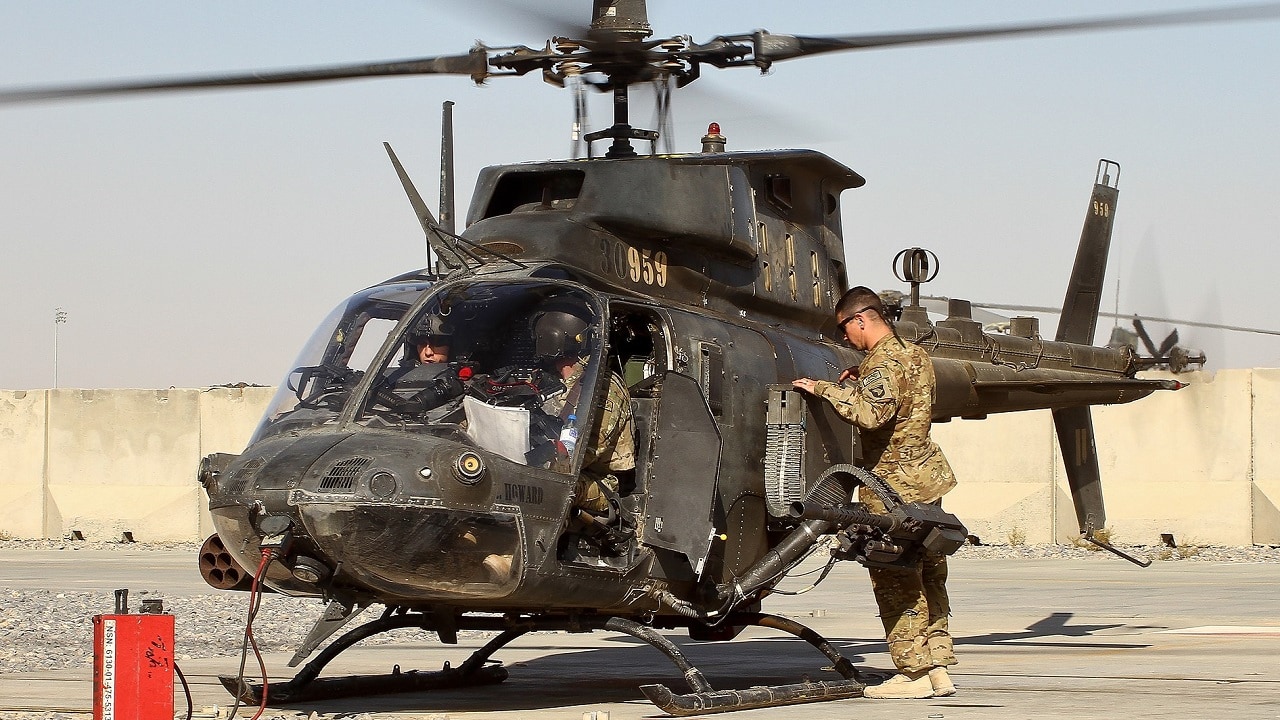 The Bell OH-58 Kiowa is not as recognizable as other U.S. Army helicopters. People recognize the insectile AH-64 Apache on sight. The UH-60 Black Hawk has its own blockbuster book and movie, Black Hawk Down. The CH-47 Chinook features super distinctive dual rotors.

The Kiowa, on the other hand, just kind of looks like a regular helicopter – one you might see cruising over downtown, or at the local airport wherever you live.

Yet the Kiowa served venerably with U.S. forces for nearly half a century. It still serves today in military forces around the world.

The Kiowa dates back to 1960, when the U.S. Navy invited domestic helicopter makers to submit bids for a new program dubbed the Light Observation Helicopter, or LOH. A dozen helicopter makers made bids. Bell submitted an ungainly looking platform, the YOH-4A, which earned the nickname Ugly Duckling. Aesthetics aside, the YOH-4A’s biggest problem was its insufficient cargo capacity. Accordingly, Bell lost the LOH bid to the Hughes OH-6 Cayuse.

Bell went back to the drawing board. They began modifying their YOH-4A, making the helicopter sleeker, better looking, and roomier. The result was indeed better looking, but more important was its added cargo space. Bell called their new helicopter the Model 206A.

In a bit of good fortune for Bell, the LOH competition was reopened in 1967. Hughes had won the initial competition, but the company was unable to meet Army production requirements, and their contract was voided. Bell used the opportunity to submit their new and improved Model 206A. (Bell also underbid Hughes.) Bell won, and the Model 206A was renamed the OH-58A. As with all Army helicopters, the model was given the name of a Native American tribe, in this case, the Kiowa.

The Kiowa was first delivered to the Army in 1969. A few months later, it made its combat debut in Vietnam. By 1975, when the Vietnam War ended, 45 Kiowas had been lost.

The Kiowa had been upgraded numerous times by Desert Storm, resulting in the D variant, which was recognizable for its mast-mounted sight. The sight looked like a large volleyball and was mounted directly above the helicopter’s rotor – it was impossible to miss. It featured a television system, a thermal imaging system, and a laser rangefinder/designator. These systems combined to help the Kiowa find targets in poor weather conditions.

The Kiowa performed admirably during Desert Storm. One-hundred fifteen individual Kiowas participated in the conflict, logging a cumulative 9,000 flight hours. The fleet achieved a 92% mission-capable rate and became regarded as the easiest helicopter in the U.S. inventory to maintain, with the lowest ratio of maintenance hours to flight hours of any combat helicopter in the theater.

The Kiowa also served domestically after Congress dictated that the Army National Guard would contribute to Reagan’s War on Drugs. In accordance with the congressional mandate, the National Guard created the Reconnaissance and Aerial Interdiction Detachments, which featured aviation units in 31 separate states. Those aviation units had 76 Kiowas in their inventories. The helicopters had been modified to serve in a reconnaissance and interdiction role – against US citizens, that is. Ultimately, the Kiowa was used in more than 1,200 missions in the U.S.