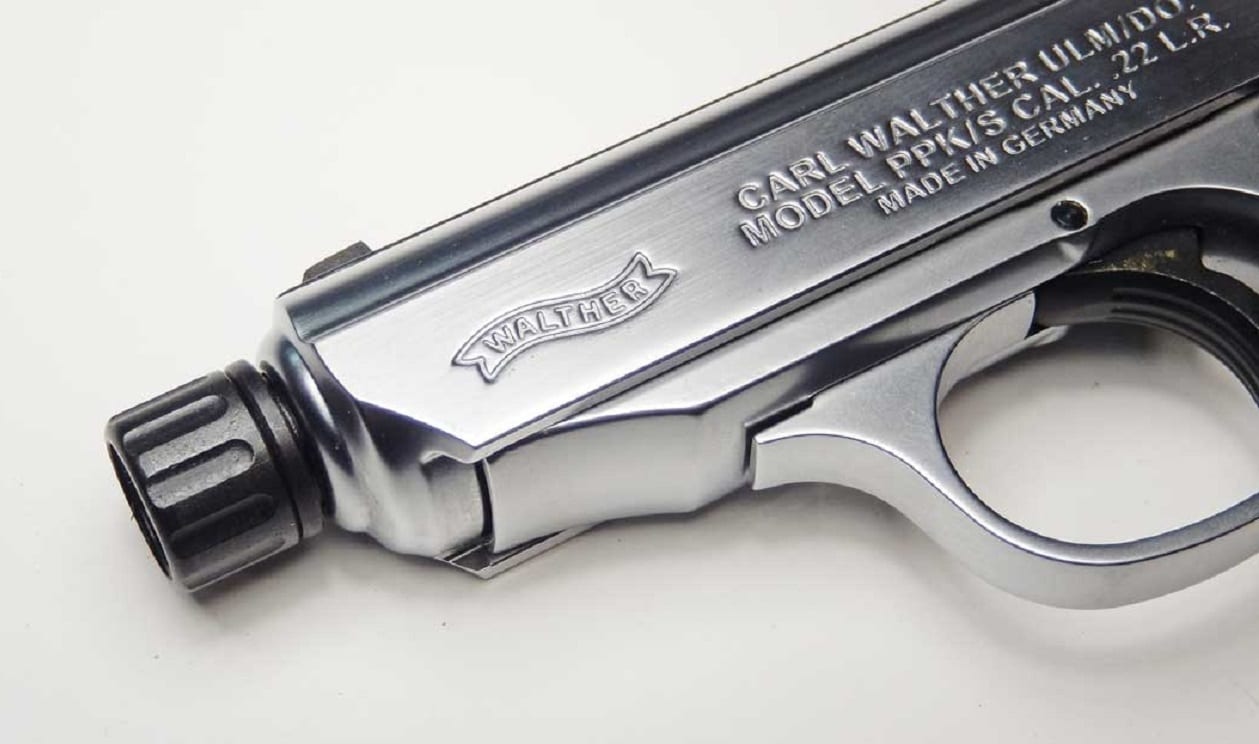 To firearms enthusiasts and action-adventure film buffs alike, the name Walther is synonymous with two particular pistols: (1) the Walther PPK, thanks to “The World’s Most Famous Secret Agent,” Commander James Bond aka Agent 007; and (2) the Walther P-38, thanks to its appearance in scores of war films as well as its real-world usage by die Wehrmacht during WWII. However, there’s much more to the story of Carl Walther GmbH Sportwaffen – founded in 1886, headquartered in Ulm and Arnsberg, Deutschland, with a U.S. subsidiary in Fort Smith, Arkansas – than just those two particular guns. With that in mind, let’s look at the Top 5 Walther handguns.

Might as well start right off the bat with the most famous Walther product, eh? Above and beyond the highly embellished world of spy fiction, the gun had already established a reputation for quality back in 1931, 22 years before the late great Ian Fleming started writing the Bond novels. The PPK (Polizeipistole Kriminal, literally “police pistol criminal”) started off as a variant of the Walther PP – in its own right one of the first successful traditional double-action semiautomatic pistols – with a smaller barrel, frame, grip, and magazine capacity in order to make it more concealable and therefore better suited to plainclothes or undercover work.

The PP and PPK have seen usage by military and police forces of 17 different countries. It also made history as the pistol that Adolf Hitler used to commit suicide in his bunker.

In 2005, Walther teamed up with America’s homegrown Smith & Wesson to produce PPK and the PPK/S under license, and in 2011, I bought one of these Smith PPKs — naturally electing for the .32 caliber option like a true 007 fan would — and found it to be a fine performer. The gun gives me good accuracy for a pocket pistol, though not quite as good as my 9x18mm Makarov. A particularly desirable feature of these Smith & Walther (so to speak) PPKs is the redesigned and more ergonomic grip tang, which better protects the web of the shooter’s hand from the hammer-pinch and slide-bite that plagued the older models.

The P38 wasn’t the first successful double-action autopistol, it was the first pistol to combine the DA/SA trigger with a locked breech (by contrast, the PP and PPK employ direct blowback), as well as one of the first pistols to display a chamber-loaded indicator. The pistol also employed two features that would later be emulated by the Beretta 92F/M9, namely an open-top slide that helps prevent stovepipe jams, and a falling locking block to keep the slide and barrel locked together until enough pressure has decayed to allow the slide to reciprocate safely.

The first three prototypes of the Heeres Pistole were submitted to the Nazi German government in 1939, and mass production started in mid-1940. Nazi Germany lost the war – thank goodness – but the gun nonetheless established a reputation for battlefield reliability. When the post-WWII Bundeswehr was formed, the P38 found a new lease on life as the P1 beginning in 1957; the only difference was that the P1 has a black-finished aluminum alloy frame, as opposed to the all-steel frame of the P38. The P1 actually remained in service with the Bundeswehr until 2004 when it was finally replaced by the Heckler & Koch USP (P8).

I bought my own surplus P1 – complete with Bundeswehr button flap holster – back in 2003 when I was stationed at Scott AFB, IL. For such an obsolescent gun, it’s been a surprisingly good performer. Many complain that the P38/P1’s double-action trigger is heavy and grating, but my specimen has avoided that malady. The pistol even helped me qualify for Stock Service Pistol Marksman status during an IDPA classifier.

The P5 is one of the most unique semiauto pistols I’ve ever come across, in the sense it’s the only autopistol I know of that ejects spent brass to the left instead of the right; nothing wrong with that, it’s just different. It was produced from 1977 to 1993. Other interesting features include an integrated slide release and decocker – like the SIG Sauer pistols, the Walther P5 has no manual safety – dual, side-mounted recoil springs, a tilting firing pin, and a non-tilting barrel.

Unfortunately, the P5 only saw limited use with military and police customers around the world, with only the Polizei of Baden-Württemberg and Rhineland-Palatinate adopting the item, though private citizen gun sales were enough to result in 100,000 being ultimately produced.

I fired a rental P5 at the Los Angeles Gun Club in Downtown L.A. back in the early 2000s. Alas, though the ergonomics felt good and reliability was 100 percent, the barrel was so badly worn out from so much range usage that the accuracy left much to be desired.

Back when this pistol debuted in late 1988, famed Guns & Ammo writer Wiley Clapp declared it to be the most accurate 9mm pistol in the world; yes, even more accurate than the SIG P210. He also reported the double- and single-action trigger alike to be exquisite. The pistol also had desirable features such as a completely ambidextrous decocking lever and magazine release, as well as the distinction of being Walther’s last metal-framed service handgun.

Downside was the $1,600.00 price tag, and mind you, that was in 1988 dollars! When I fired one at L.A. Gun Club, it didn’t give me a significantly better performance than a Glock or SIG to justify the extra cost, But I know fellow shooters who love their P88s.

Development of this gun began in 1994 and was finalized in 1996. As noted by Kyle Mizokami, “Designed by former Glock and Steyr engineers, the P99 was also the company’s first handgun to use polymers for the frame/grip.” The pistol remains in production and has been adopted by police forces in 14 different countries, including Ireland and North Macedonia.

In this article:Firearms, Gun, Guns, Walther