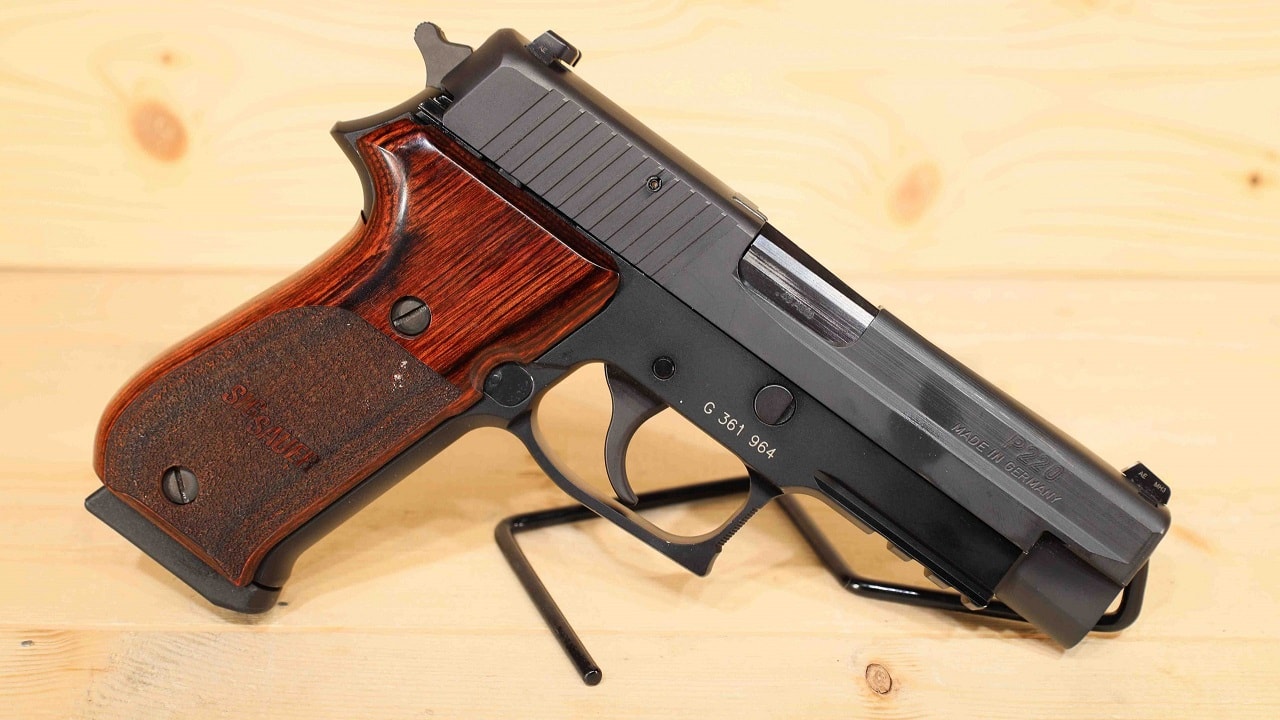 SIG Sauer P220 .45 ACP Profile: As I’ve said before, I’m not the biggest fan in the world of SIG Sauer pistols; I shoot them well enough, but for whatever reason, they just don’t give me the “Yeah, buddy!” fun factor and sense of accomplishment that I get from capping rounds downrange with my Beretta 92FS/M9, WWI Colt M1911, CZ-75, or my multiple Glocks.

That said, they are a superbly well-made brand with a very loyal following, and what’s more, I’ve always thought them to be very handsome-looking pistols from an aesthetic standpoint.

The manufacturer, SIG (Schweizerische Industrie Gesellschaft) traces its roots back to 1853, so they know what they’re doing.

One of their most popular and well-regarded products is the SIG P220 .45 ACP. We decided to give this pistol a deep look to see why it is so popular and also explore my own personal shooting experiences with the SIG Sauer P220 overall.

Debuting in 1975, the 9mm version of the P220 is what initially replaced the P210 as Swiss Army standard issue, but it was the .45 ACP chambering of this pistol, coming out two years later, that gained big-time popularity in the United States, as it combined big-bore stopping power with double-action lockwork.

As a review on the Christian Gun Owner website puts it, “The Sig P220 is a company flagship that SIG states: ‘THE ONE THAT STARTED IT ALL.’ You better believe it.”

Before the SIG P220 came along, if you wanted a double-action semiauto pistol with a double-action trigger, you were S.O.L; your choices in the caliber were either the M1911 single-action autopistol or a double-action revolver such as the First World War-vintage Model 1917 revolvers from Colt and Smith & Wesson.

Not only did the P220 rapidly gain popularity with American private citizens and law enforcement officers alike, it even persuaded a lot of old-school dyed-in-the-wool M1911 single-action buffs like John Farnam of Defense Training International, LLC to switch guns.

Among the first Stateside law enforcement entities to adopt the pistol was the Huntington Beach Police Department in Southern California’s Orange County. For whatever reason, the gun was initially marketed in the U.S. under the moniker “Browning BDA” but eventually was rebranded under its proper name, the P220; concurrently, the P220 went from a butt-heel magazine release to the push-button magazine release far preferred by American shooters,  As noted by Travis Pike on the Gun University website:

“As double-stack 9mms took over, the P220 became increasingly known as a 45 ACP firearm. SIG’s own P226 offered a double-stack 9mm option, and the P220 kept up with the most popular 45 ACP pistols in its single-stack configuration. Plus, America still really loved the 45 ACP round, and the SIG offered an M1911 alternative. Thus, the P220 became the 45 ACP pistol we all know and love.”

From a personal experience, the very first .45 caliber handgun I ever fired was a P220, at the then-newly-opened Los Angeles Gun Club in Downtown L.A, way back on my 15th birthday in August 1990. I clearly recall the ponytailed manager of the range absolutely raving about it: “It’s the best .45. So much better than the Colt.”

Alas, that particular day was one of my more inauspicious days in terms of marksmanship performance; even though I knew objectively it was a quality weapon, I couldn’t hit the broad side of a barn with it, with less than 50% of my shots striking anywhere on the silhouette target!  In fairness, I had an even worse hit rate with the Heckler & Koch (HK) P7 9mm I rented for that same range session, and as readers of my previous article on that particular gun will recall, that’s actually one of the sweetest-shooting pistols in my so-called “Orr-senal of Democracy” (see what I did there?). Oh well, we all have our bad days, right?

Fast-forward two months, and I turned in a much better performance with the LAGC rental P220, though, much to the surprise of both myself and that aforementioned manager, I shot better and got more enjoyment from the Colt Government Model.

I haven’t fired a P220 in many years, so to get a better assessment of the gun for our readers’ benefit, I picked the brain of one of my old high school buddies (who requested that his name not be included in this article) who happens to own a P220.

Here’s what he has to say:

“Heavy, even for a .45 (which I prefer). Very reliable. Very accurate out of the box. Slightly elongated but very smooth trigger pull and reset (compared to the P226). Low recoil (due to the weight). Expensive for a ,45. Good for guys like me with big hands.” Just to be a wiseass, he adds, “Oh, and it isn’t Glock,” followed by a turd-eating grin emoji. (Meh. “Haters Gonna Hate,” I suppose.)

My subjective lack of enthusiasm for SIGs notwithstanding, I can still objectively recommend the SIG Sauer P220 as an excellent piece for home defense, carry, and competition. According to the True Gun Value website, “A SIG SAUER P220 pistol is currently worth an average price of $1,053.36 new and $761.67 used. The 12 month average price is $1,081.23 new and $800.41 used.”