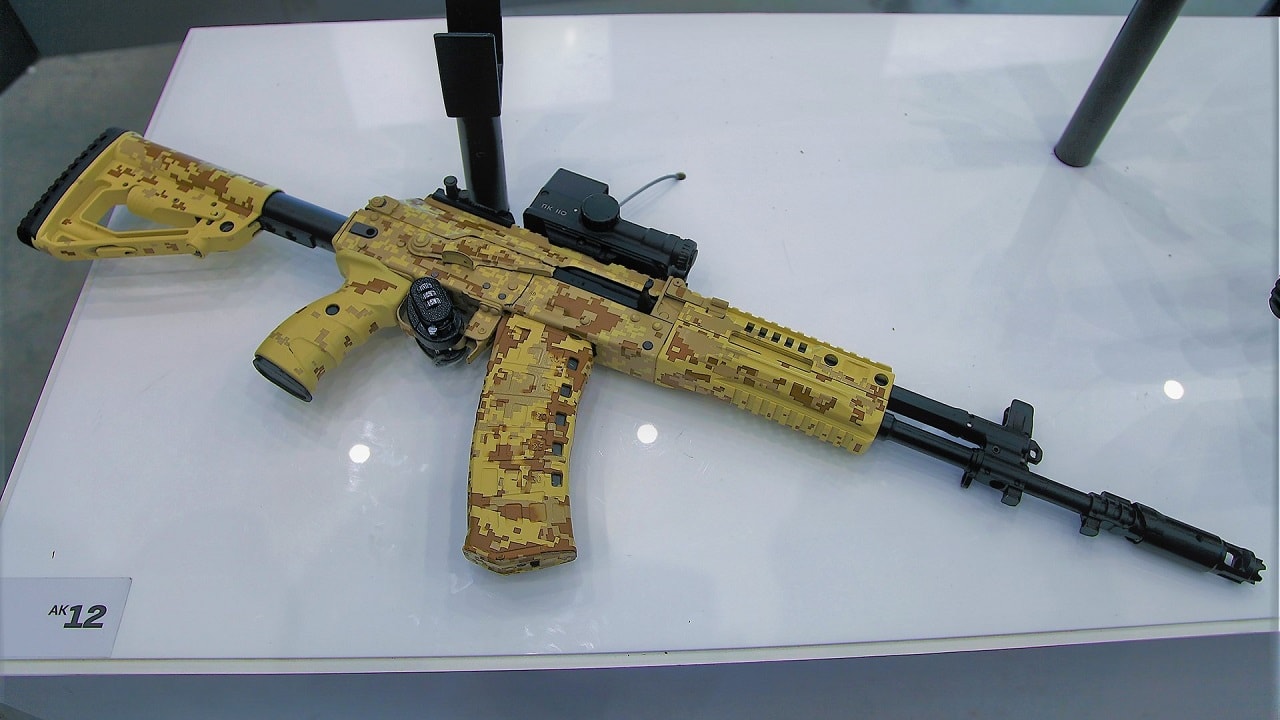 AK-12 Rifle Profile – We here at 19FortyFive have penned many an article discussing 5th Generation fighter planes and how they stack up against 4th Generation and so-called “4.5 Generation” fighters.

Heck, we’ve even thrown in some interesting pieces on 6th Generation fighters for good measure.

Well, as it turns out, that “5th Generation” label is equally applicable to far less complex weapon systems, namely military rifles. Say hello to the AK-12, the representative for the 5th Generation of Kalashnikov assault rifle.

The AK-47, of course, stands as the first generation, being the original design of its namesake Генера́л-лейтена́нт/Generál-leytenánt (Lieutenant General) Mikhail Kalashnikov.

From there, the AKM, AK-74, and AK-74M served to fill in the gaps for the second, third, and fourth generations of Kalashnikov assault rifles.

Beginning with the third generation AK-74, the 7.62x39mm cartridge was replaced by the intermediate-sized 5.45x39mm round, which is less powerful but offers the benefits of greater accuracy, lower recoil, and more advantageous terminal ballistics in terms of tumbling and fragmenting upon striking soft targets (read: human tissue).

However, in the case of the fifth generation AK-12, whilst it has carried over the 5.45x39mm chambering from the previous two generations, in testament to the versatility of the AK platform it’s also produced in 7.62x39mm and 5.56x45mm variants, namely the AK-15 and AK-19 respectively.

That said, the basic AK-12 was designed in 2011, which makes one wonder if “AK-11” would be a more proper alphanumeric designation.

The manufacturer was the Izmash factory, now known as the Kalashnikov Group, which submitted the design as an entry into the so-called Ratnik/Ратник (“Warrior”) program trials which intended primarily to equip Russian SOF, Airborne and Naval Infantry troops.

The final product was accepted into service in January 2018 and is used by the VDV (Vozdushno-desantnye voyska Rossii/Воздушно-десантные войска) and the military subdivisions of the National Guard of the Russian Federation.

In addition, the weapon has seen usage by the elements of the Qatari Emiri Forces, the Armed Forces of the Republic of Kazakhstan, and Armenian Special Forces.

The AK-12 has a barrel length of 16.3 inches, an overall weight of 36.3 inches, and an empty weight of 7.72 pounds. The maximum firing range is 3,440 yards, with maximum effective ranges on point targets and area targets of 481 yards and 870 yards, respectively.

Improvements Over the Earlier Generations

In the spirit of not fixing what ain’t broke, the AK-12 continues its predecessors’ traditional Kalashnikov-type gas operated action with rotary bolt locking as well as the 30-round detachable box magazine. However, it also incorporates some improvements over the earlier iterations, such as better ergonomics, less recoil, faster cooling and can be loaded one-handed.

Moreover, receiver, gas block, gas tube and barrel — the AK-12 is the first weapon in the AK series to sport a free-floated barrel — have been redesigned to attain better accuracy under all operating conditions.

In addition, as noted by Travis Pike, “In a very smart move, Kalashnikov Concern pushed the rear sight as far back as possible on the receiver. The new rear sight is also a peep sight versus the standard AK open sights. The increased sight radius and peep sights increase the shooter’s precision at more distant ranges.”

Due to the import ban on Russian firearms, reliable range reports on the AK-12 are almost as difficult to find as hen’s teeth.

Accordingly, back in July 2018, gun writer Marco Vorobiev of Gun Digest decided to improvise by building an AK-12 clone based on an I.O., Inc. prototype rifle and cobbling together parts from FAB Defense, Brownells, Geissele Automatics, Legion USA and K-Var Corp. Here’s what Marco had to say about the end results:

“At the range, I set up at 50 yards…First shots did not disappoint. The clone worked great and, in the best AK-74 tradition, was easy to shoot with no appreciable recoil…My AK-12 clone looked very similar to the Russian AK-12 Avtomat and shot exceptionally well, enough for me to adopt it as one of my work rifles… I used its open sights to see if it would produce a decent group and it did. All 30 rounds nestled in a tight group at the 1 o’clock spot, approximately 1 inch off the bull’s eye of the target. At 100 yards, my group opened up some, but was still way within my expectations…In my hands, I had a gun that not only looked and felt great, but also worked well.”

Alas, due to that aforementioned import ban, the AK-12 is not available for sale in the good ol’ US of A. Извините, товарищи!/Izvinite, tovarishchi (“Sorry, comrades”)!