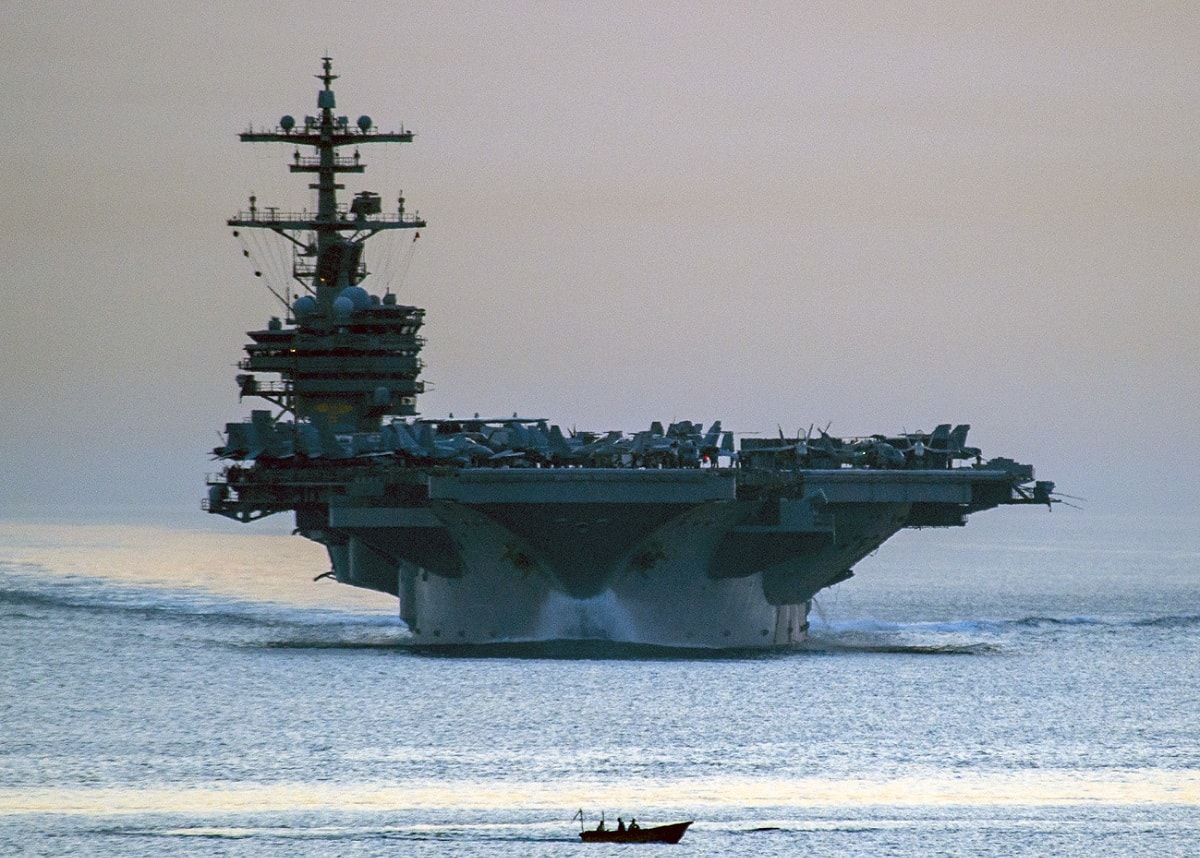 USS George H.W. Bush is One Powerful Aircraft Carrier: To date 10 United States Navy aircraft carriers have been named after a president of the United States, while an eleventh (a second carrier named for the late John F. Kennedy) is now under construction. However, only one of those flattops was also named for a naval aviator – the USS George H.W. Bush (CVN-77). Fittingly, the vessel’s call sign is “Avenger,” after the TBM Avenger aircraft that then-Lt. Bush flew during the Second World War. Moreover, CVN-77 is also only the second carrier to be named for any naval aviator – with the USS Forrestal (CN-59) being the first.

The motto of the USS George H.W. Bush is “Freedom at Work,” which was adapted from President Bush’s inaugural address, in which he said, “We know what works: Freedom works. We know what’s right: Freedom is right.” Today, the 10th and final Nimitz-class carrier ensure that freedom remains a right for every American.

On January 26, 2001, just days after President George W. Bush, son of the former president, took office, Northrop Grumman Shipbuilding Newport News was awarded a contract to build the final Nimitz-class carrier. It was on December 9 of that same year that the naming ceremony was held with Bush 41 in attendance.

Former President Bush was also present at the keel-laying ceremony on September 6, 2003, and served as the keynote speaker. He later participated in the “stepping the mast” event, where coins or other items of significance are typically placed under the bottom of a ship’s mast – and President Bush offered his naval aviator wings.

The ship, which was modularly constructed, was officially christened on October 7, 2006. It was a notable event as the former president became the first to attend such a ceremony of his namesake vessel. Delivered to the Navy in May 2009, she will likely remain in service until the late 2050s.

As with the sister carriers of her class, USS George H.W. Bush measures 1,092 feet (333 m) and displaces more than 100,000 tons, making her one of the world’s largest warships in the world today. Yet, there are also several notable differences from the previous Nimitz-class carriers. CVN-77 features a bulbous bow design, which reportedly provides more buoyancy to the forward end of the ship and improves hull efficiency. Additionally, the flight deck has curved edges that were designed to reduce the radar signature.

She is also the second carrier after USS Ronald Reagan (CVN-76) to feature a modernized island with a new radar tower. That island is smaller and has been repositioned much further aft, which is meant to improve flight deck access while reducing signature and electronic self-interference.

Moreover, one of the most infamous new features of the George HW Bush is its toilet and sewage system, which are similar to what is used on commercial aircraft. However, the systems have been in the spotlight not due to any improved efficiency, but rather the fact that they were prone to unexpected and frequent clogging!

As with other Nimitz-class carriers, USS George H.W. Bush is a floating military base – home to a crew of more than 6,000 sailors and marines including 3,200 crew with 160 officers and 2,500 making up the aircrew. The warship also accommodates the carrier battle group’s flag officer and about seventy additional crewmembers.

She can carry typically up to fifty-six fixed-wing aircraft including the F/A-18A/C and F/A-18E/F, Grumman EA-6B Prowler, and the Grumman E-2C Hawkeye, as well as up to 15 rotary aircraft including the Sikorsky SH-60F, HH-60H Seahawk and SH-60B Seahawks. With four C13-2 steam catapults and three mk7 mod 3-type arrester wires, the carrier can launch and recover aircraft rapidly and simultaneously. If necessary, crews can launch aircraft at a rate of one every 20 seconds.

In August 2014, while she was deployed to protect U.S. interests in the Persian Gulf, a pair of F/A-18F Super Hornets launched from the carrier to drop 500-pound laser-guided bombs on ISIS forces near the Kurdish capital city of Erbil. A month later, F/A-18 Hornets and Super Hornets took part in additional sorties to strike targets at ISIS positions within Syria.

On December 12, 2021, an F-35C Lightning II Joint Strike Fighter (JSF) aircraft, assigned to the “Rough Riders” of Strike Fighter Squadron (VFA) 125, landed for the first time aboard the carrier, while underway in the Virginia Capes Operations Area.

Conducting air operations with F-35Cs aboard USS George H.W. Bush was seen to hold special significance for the vessel. The warship’s seal was emblazoned by the P-3 Avenger aircraft flown by President George H.W. Bush in World War II superimposed on a F/A-18 Super Hornet, and both are superimposed on an F-35C. At the time of the ship’s commissioning, that was to represent the past, present, and future of Naval Aviation, which is now coming to fruition. 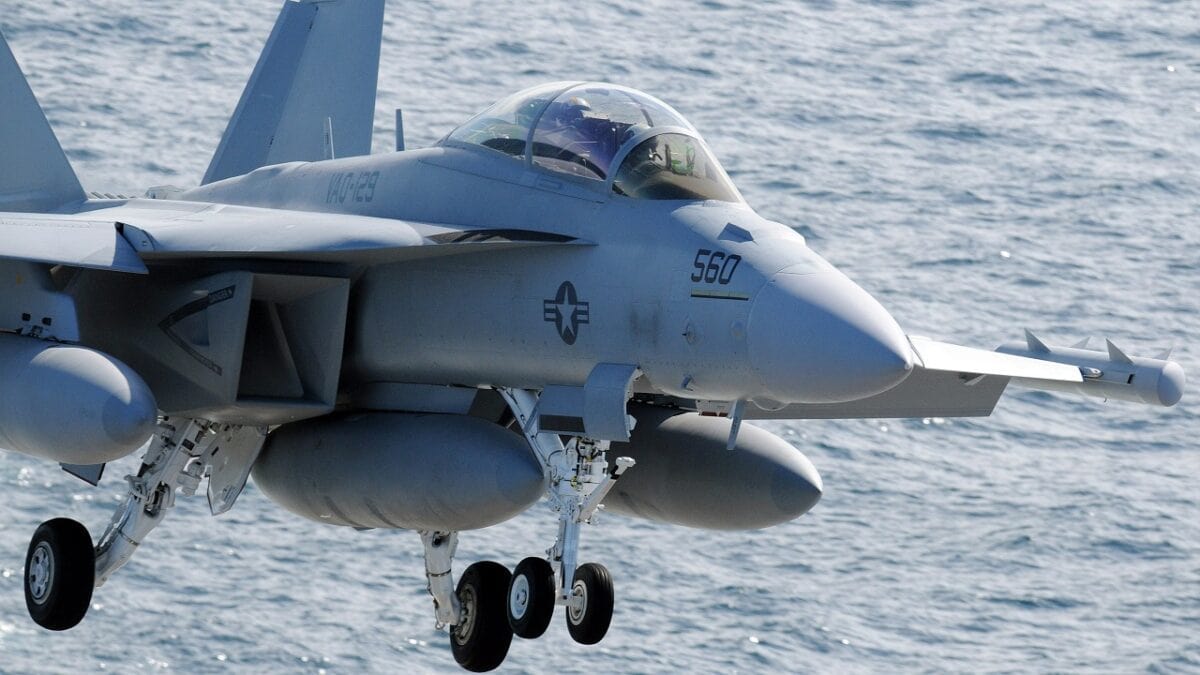 (Feb. 17, 2009) An EA-18G Growler assigned to the “Vikings” of Tactical Electronic Warfare Squadron (VAQ) 129 aligns itself for an at sea landing aboard the Nimitz-class aircraft carrier USS Ronald Reagan (CVN 76). The Growler is the replacement for the EA-6B Prowler, which will be replaced in the 2010 timeframe. Ronald Reagan is underway performing Fleet Replacement Squadron Carrier Qualifications in the Pacific. (U.S. Navy photo by Mass Communication Specialist 3rd Class Torrey W. Lee/Released). 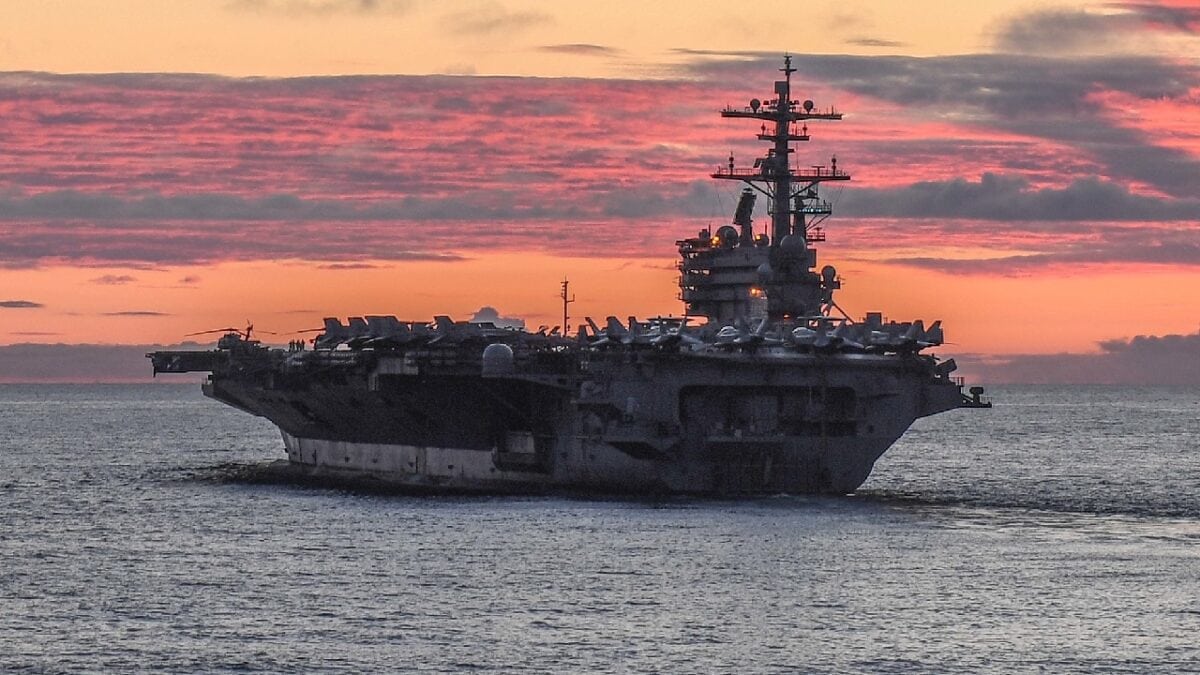 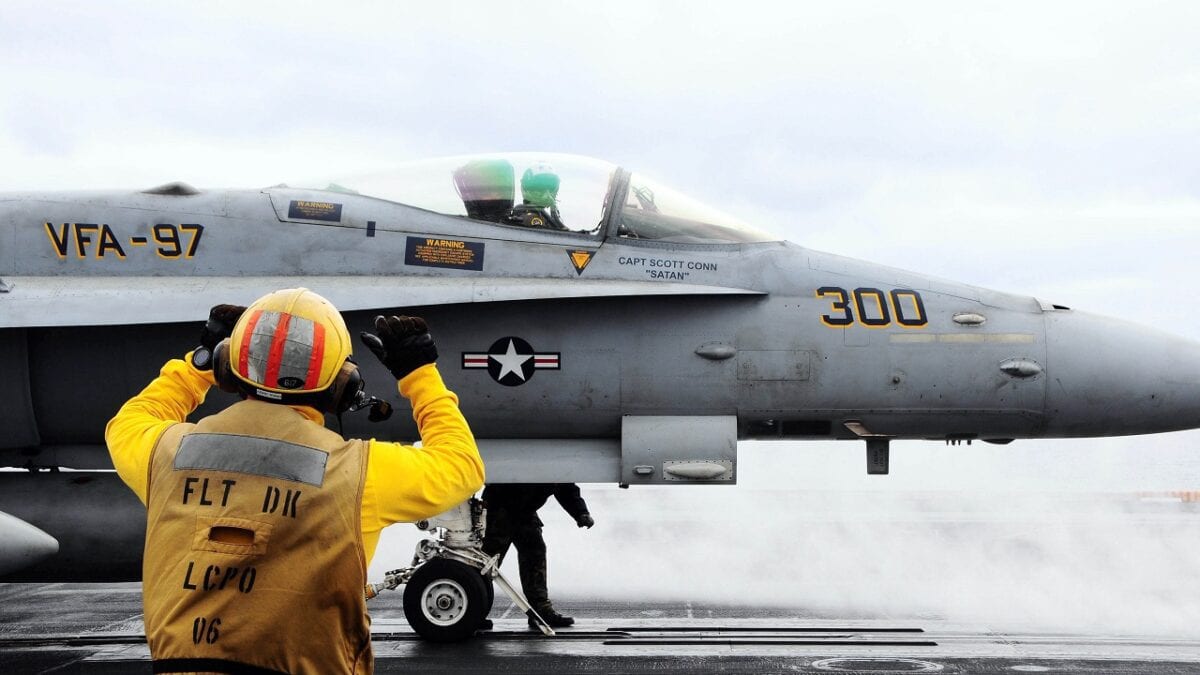 A Chief Aviation Boatswain’s Mate guides an F/A-18C Hornet assigned to the “Warhawks” of Strike Fighter Squadron 97 into place on catapult three aboard the aircraft carrier USS Nimitz. Nimitz and Carrier Air Wing 11 are conducting a Composite Training Unit Exercise off the coast of Southern California in preparation of a scheduled deployment to the western Pacific Ocean. 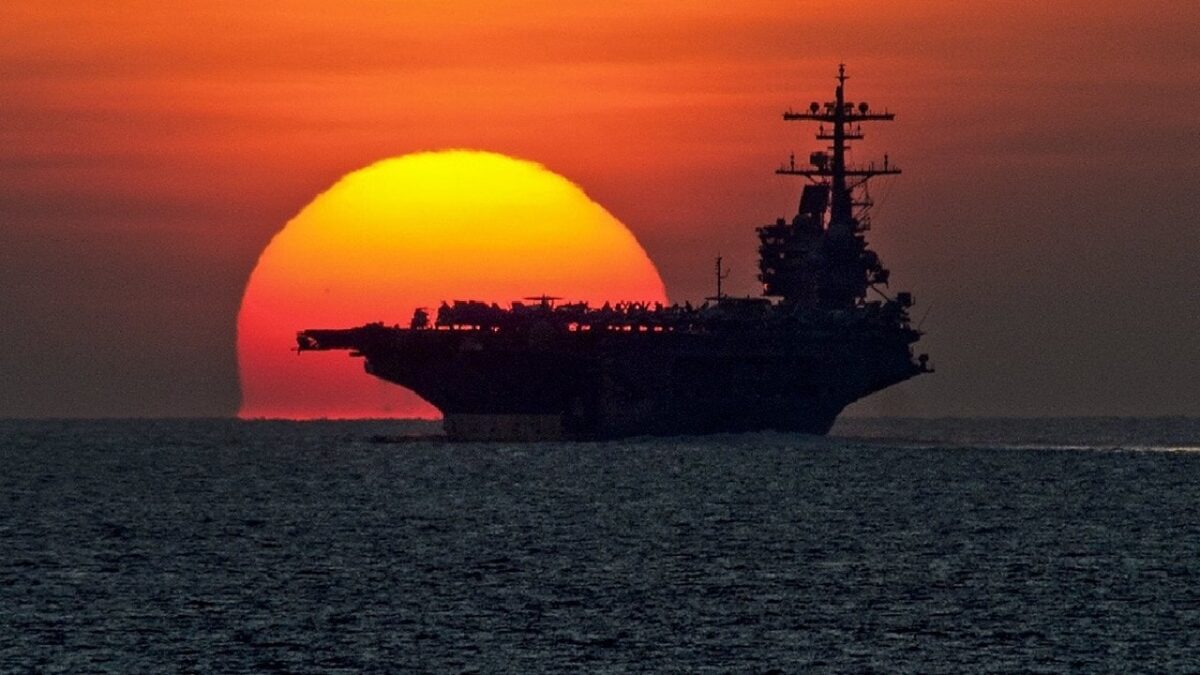 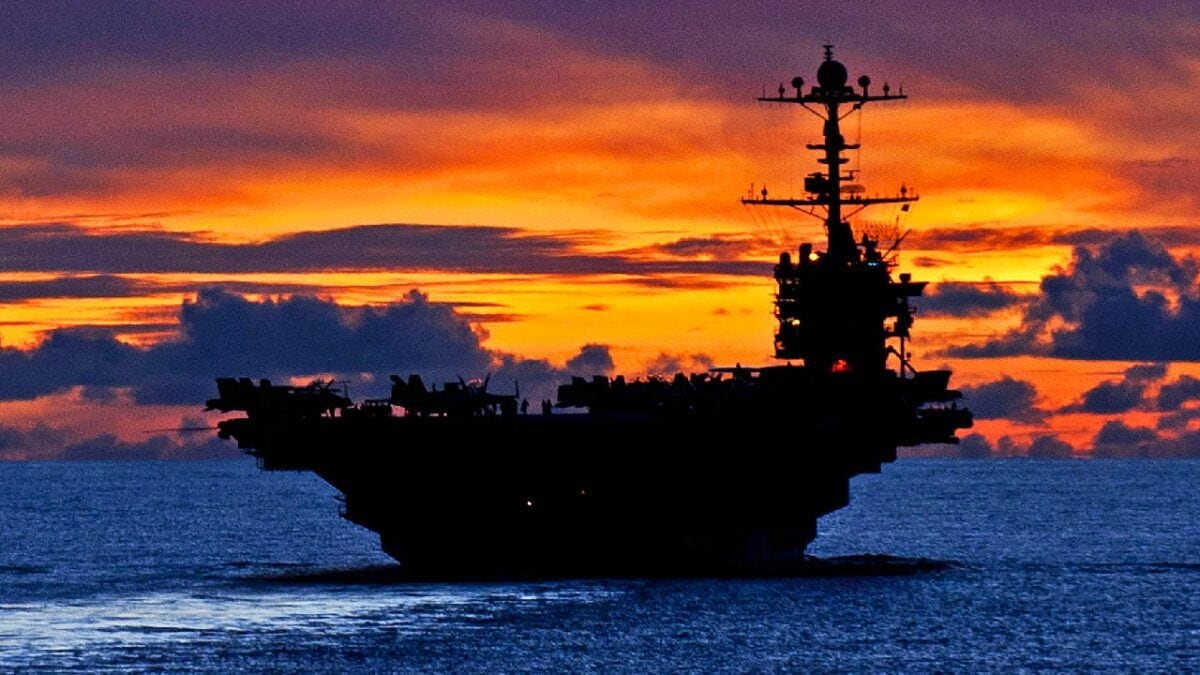 The aircraft carrier USS George Washington sails through calm seas near Guam at sunset while under way in the Pacific Ocean, Sept. 8, 2012. The George Washington is the centerpiece of Carrier Strike Group 5, the US Navy’s only continuously forward deployed carrier strike group, based out of Yokosuka, Japan. Carrier Strike Group 5 is currently on a routine Western Pacific patrol. 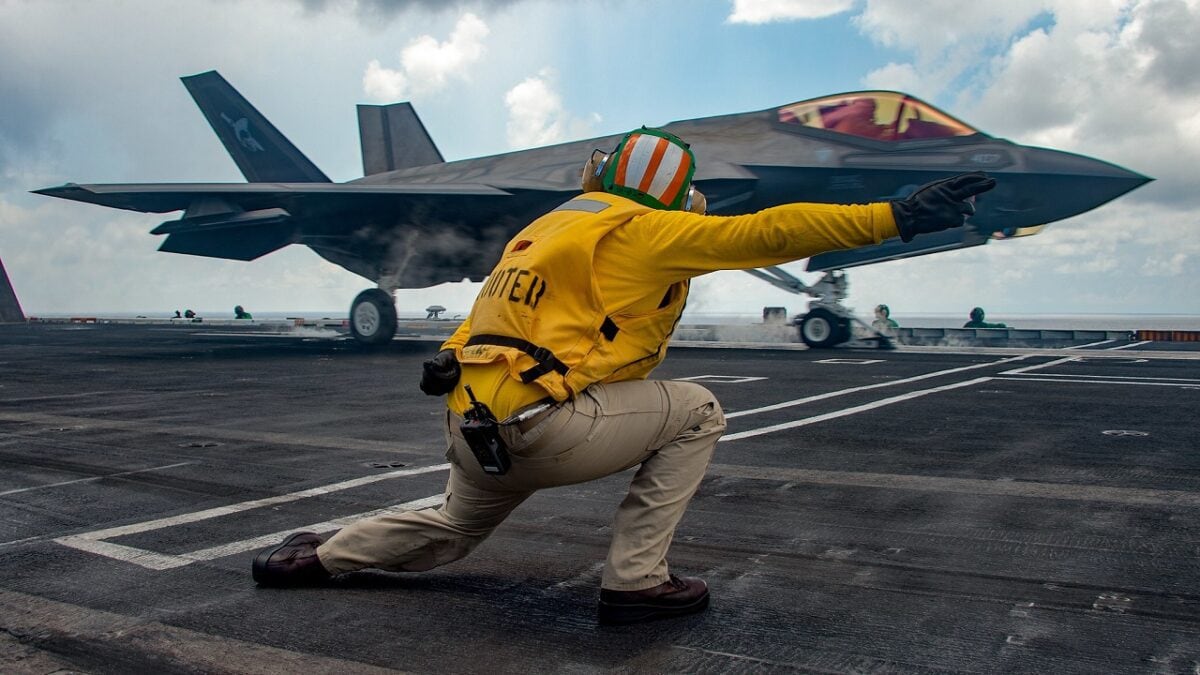 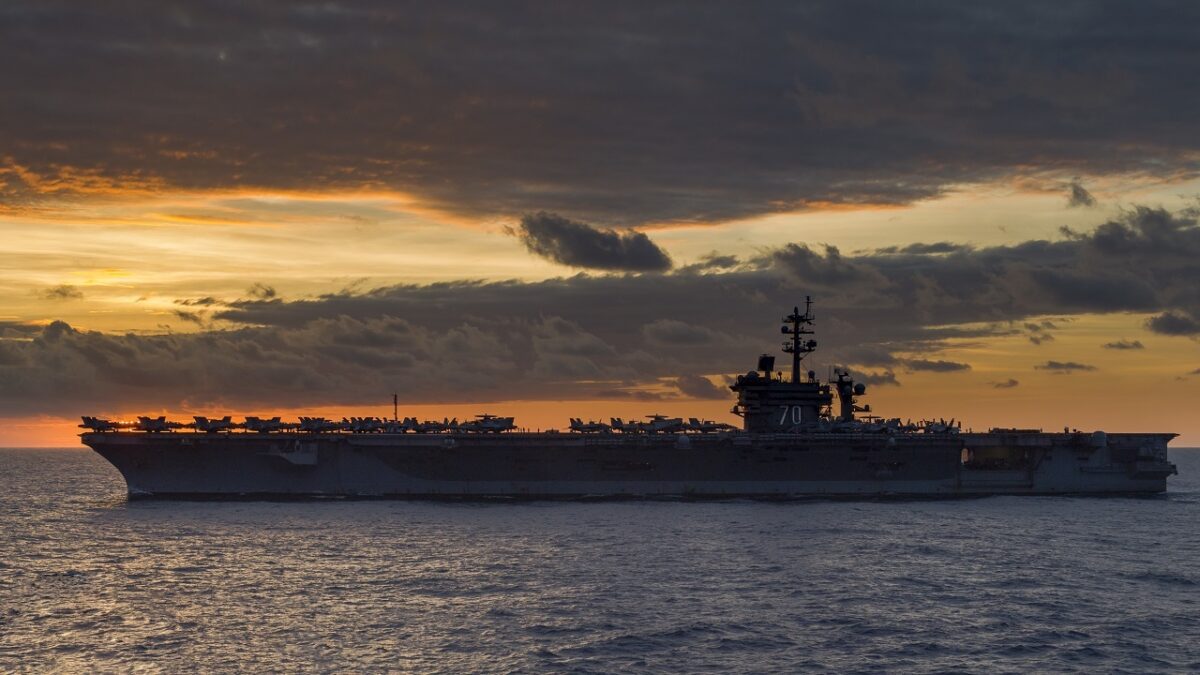