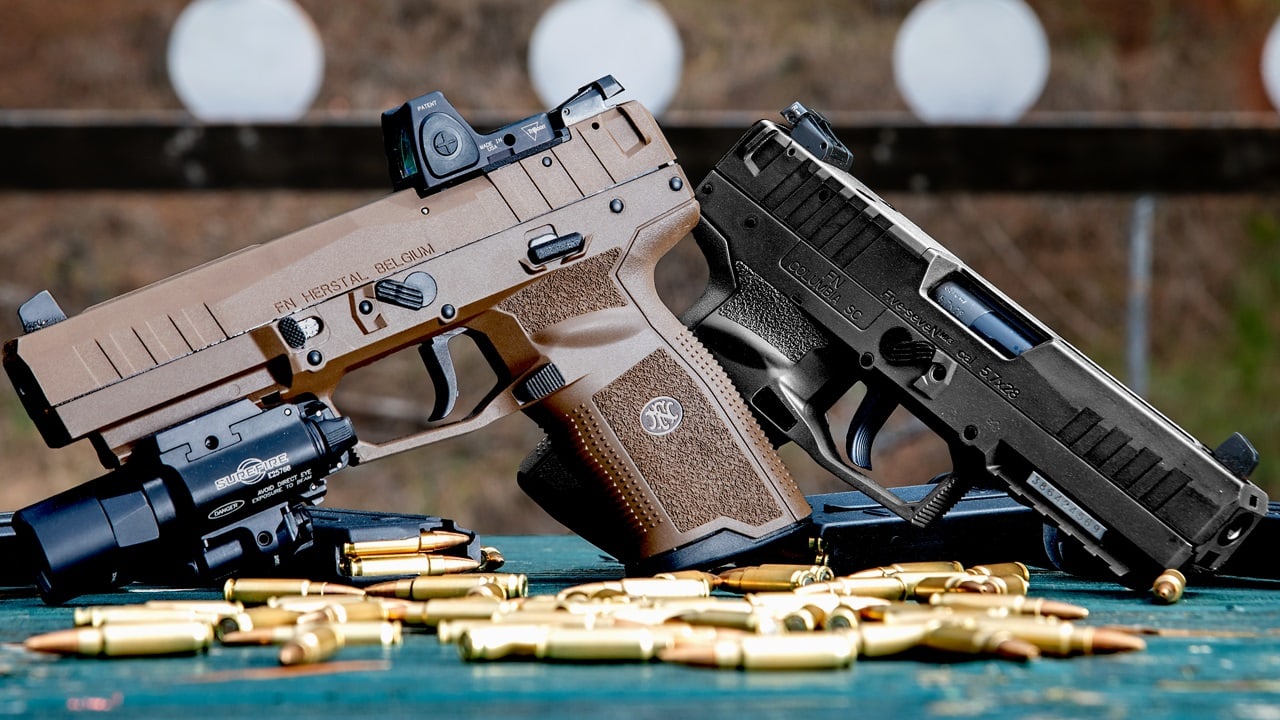 AR-15 pistols have a well-established following. They use the AR-15 rifle platform as a starting point for handguns that use 5.56x45mm NATO rifle caliber ammo.

Starting in 1998, the Belgian gun manufacturer Fabrique Nationale Herstal (FN) decided to turn the concept on its head by designing a pistol chambered for a round that bears at least a token resemblance to the 5.56mm rifle round.

Say hello to the FN Five-seveN semiautomatic pistol and the FN 5.7x28mm cartridge.

The FN Five-seveN actually wasn’t the first firearm to chamber the FN  5.7x28mm cartridge. That distinction went to the same manufacturer’s P90 personal defense weapon (PDW) designed back in 1990. For the benefit of our readers not familiar with the PDW concept, gun writer Caleb Giddings of TargetBarn.Com provides this explanation: “The accepted definition of a PDW is a gun designed to be issued to troops that aren’t on the front lines, but still might have need for a weapon more powerful than a handgun.” Put another way, basically a “tweener” hybrid between a carbine and a submachine gun (SMG).

As regards the 5.7×28, “This little cartridge is known for its armor-penetrating abilities, flat trajectory, and high velocity out of a pistol-length barrel. The FN 5.7 has better range, accuracy, and terminal performance than the 9×19 Parabellum that it was trying to replace for NATO forces once upon a time.

“This cartridge is one of the most beloved — and hated — in existence today. Some experts claim it is perfect for self-defense, while others challenge those statements vehemently and regard it the same way they would a rimfire round.”

The Five-seveN is a single-action autopistol with an internal hammer, chrome-lined cold hammer-forged barrel, steel slide, polymer frame, and 20-round standard magazine capacity. It is equipped with an ambidextrous, forward-mounted manual safety and an accessory rail that accepts tactical lights and lasers. Barrel length is 4.8 inches, overall length is 8.2 inches, height is 5.7 inches, and width is 1.4 inches. Trigger pull weight is in the 4.4-to-7.7-pound range.

The gun has been adopted by the military and police forces of over 40 nations. Meanwhile, in the world of action-adventure fiction, Juan Cabrillo, hero of The Oregon Files novel series – a spinoff of the late great Clive Cussler’s Dirk Pitt series – frequently totes an FN Five-SeveN.

I only fired the Five-seveN on one occasion, renting one at the LAX Firing Range in Inglewood, California, sometime around 2008. It was an interesting experience, though it did not leave me inclined to buy one of my own.

The appearance of the rounds reminded me a bit of 5.56mm, and the muzzle report and flash had the look and feel of shooting an AR-15 or M16, yet the felt recoil was barely above that of a .22 LR pistol. That messed with my head a little bit, but it did not prevent me from getting consistent head hits at 7 yards and center-of-mass torso hits at 25 yards. Reliability was flawless.

Given my own limited trigger time with the Five-seveN, I decided to pick the brain of a friend who owns one of these pistols – my former high school classmate “Misfit.” Some of our readers may recall for being in my articles on the Glock 18 machine pistol and the SIG Sauer P220.

Misfit’s only complaints are the price of the ammo and the fact that some of his local ranges don’t have a backstop sufficiently reinforced to handle the 5.7 round. Once he found a range that did allow the caliber, he was quite happy with its performance, proudly noting that “the grouping was in his left eye.” He goes on to add that “gun owners of any experience level should own that weapon” and “I love that gun more and more every time I shoot it.”

Based on my own and Misfit’s experiences, I can recommend the FN Five-SeveN, but be ready to bring a bankbook for the gun and ammo alike. The manufacturer’s official info page lists an MSRP of $1,409. As for the ammo, the staff al LAX Range and Los Angeles Gun Club inform me that the ammo for their rental Five-SeveNs is currently selling for 50 bucks for 50 rounds – a dollar a pop.