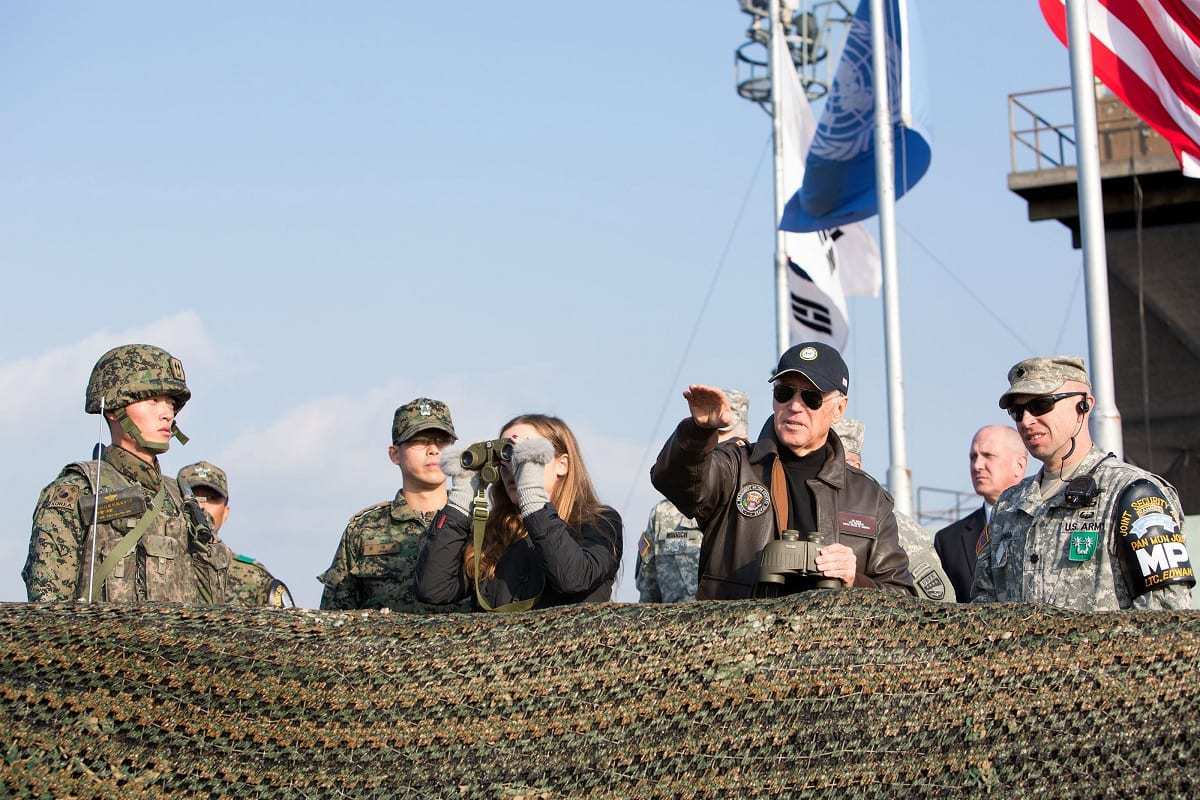 Vice President Joe Biden and Finnegan Biden are briefed by Lieutenant Colonel Daniel Edwan, Commander of the United Nations Command Security Battalion, during a visit to Observation Point Ouellette, in the DMZ, December 7, 2013.

While it might not be front-page news here in Washington, DC, there is a great deal of press and analyst interest in what happens next on the Korean Peninsula depending on who wins the U.S. presidential election come November 3rd–or maybe a few days or weeks later.

With the Biden campaign publishing an op-ed in Yonhap, a prominent South Korean publication similar to the news service the Associated Press here in the U.S., there is tremendous curiosity on what he would do as president, but also on what Trump would do in a second term when it comes to Korea.

For the last few days, I have been kindly asked to share my thoughts on this issue in a few different formats for some great media outlets, on the left and the right. Here is a snapshot of my thinking on what a Joe Biden or Donald Trump win looks like for the Korean Peninsula and North Korea specifically.

What is at stake for South Korea come November 3rd?

The Moon Government and anyone interested in seeing the Korean Peninsula remain a top issue should be watching this election quite closely—and hoping for a Trump win, as Trump seems poised to try and make a deal with North Korea should he win.

While it’s hard to know who will win, if Biden were to win, it seems clear he will not make any Korean issue—whether its SMA, trade or North Korea—a top-tier issue in any respect.

Biden will be pressed to make handling the Coronavirus and rebuilding the U.S. economy a top priority, which makes sense. That means Korean Peninsula issues and specifically the North Korea issue will lay dormant for months thanks to a standard two to three-month policy review—at best.

A Biden win means, in the best-case, Seoul and Pyongyang will be waiting until the Spring for any major movement on the issues they care about.

What can we expect for South Korea under a second Trump administration or a new Biden administration in terms of the U.S.-ROK alliance, SMA defense burden-sharing negotiations, and other bilateral issues?

I don’t see President Trump somehow changing his mind on SMA talks, and I would have to assume Washington would still want a 15 percent or more increase.

However, at some point, the optics of this dragging along for so long does not make sense for Trump. I would argue that if Trump does win reelection, look for Trump to agree to a one year deal for around 12-13 percent that has been offered by Seoul. Sadly, it seems SMA will always be an issue for as long as Trump sits in the Oval Office.

A Joe Biden win would be great for the Moon Government if one looks at Biden’s goals for the U.S.-ROK Alliance in terms of an SMA deal and trade issues only.

I would argue that a Biden Administration would quickly sign a new SMA with Seoul within the first 100 days of taking office—perhaps the one area the new administration would move fast on when it comes to Korea. Biden will not want to drag on talks any longer and likely ask for a 3-5 percent increase per year for a multi-year period.

What can be expected in terms of dealing with North Korea’s nuclear buildup under a second Trump administration and a Biden administration?

I think if Donald Trump is reelected he will push hard for a summit with Kim and a deal that is based on the parameters laid out in Hanoi—with both sides giving some ground to accommodate each other. That means the full Yongbyon nuclear facility and an ICBM/nuclear testing freeze—yes, all three hundred plus buildings and facilities at Yongbyon—for sanctions relief in the areas of coal and textile exports that could be snapped back if North Korea cheats.

If Joe Biden is elected what happens next is pretty clear, at least from my perspective. The Biden team will go into a policy review until March or April—likely frustrating the North Koreans. They will be very tempted to set the table and raise tensions by testing ever more powerful missiles and maybe even the new ICBM they just displayed on October 10th. That might force the Biden camp to demand an increase in sanctions creating an escalatory spiral that we have seen time and time again. Unless the Biden team can come into the White House with a plan ready to go on day one, I see very dark days potentially ahead.

I have a feeling the situation in North Korea thanks to sanctions, coronavirus, food insecurity, and three typhoon landings is likely deteriorating—and that means North Korea has only one thing it can do: start trouble to get attention.

In the last presidential debate, Biden said he would meet with Kim Jong-un but only if Kim agrees to draw down his nuclear arsenal. Do you believe such an approach would work with Kim? Do you think it could have a better chance of ridding North Korea of its nuclear weapons than Trump’s so-called top-down approach?

I frankly can’t draw any major conclusions from Biden’s comments as they were in the heat of a debate—and they were very sloppily worded and he stumbled and stuttered a lot. I think he was even a little shocked he was asked the question and seemed unprepared for it.

Biden was so vague and evasive it seems to me that his North Korea policy will be crafted only during a policy review by those he picks to lead such a review. Sadly, his recent Yonhap op-ed read more like campaign talking points than an attempt to hint at policy choices for the Korean Peninsula, and that in my view is a wasted opportunity.

Right now, we have very little hard information to make a strong guess on what Biden would do on North Korea, as his advisers and now himself keep giving us confusing, contradictory or talking-point style messaging that says nothing. And that worries me a great deal.

North Korea in many respects is trapped in a geopolitical and economic cage of its own making. The Kim playbook of ratcheting up tensions—testing ICBMs or nuclear weapons would be the most controversial play—to get attention or concessions won’t work no matter who wins the White House as Pyongyang can’t afford to get hit with any more sanctions at this point.

With the economy in depression, three typhoons making landfall, food insecurity issues, and now COVID-19 creating a self-imposed embargo, how much more can North Korea take? At what point does the DPRK run out of foreign exchange reserves—something we might already be seeing? No nation can take such a pounding forever.

Kim’s tears during the recent October 10th military parade and recent apology to South Korea for killing a ROK citizen might be indicators that all is not well internally in the hermit kingdom. Pyongyang rarely shows weakness in any format. While Kim might test an ICBM or nuclear weapon to test Biden, he must be very careful, as at some point the stability of his regime will start to crumble.

Still, in a recent interview with Yonhap, Biden’s foreign policy adviser, Brian McKeon, noted that Biden would support the resumption of humanitarian assistance and inter-Korean economic cooperation, which have been long demanded by Seoul’s Moon Jae-in government. Would resuming humanitarian assistance to North Korea while keeping maximum pressure weaken the overall sanctions regime? Or would it expedite the denuclearization process by showing North Korea what may be in store for them as argued by the South Koreans?

To be frank, with Joe Biden constantly referring to Kim Jong-un as a thug, it is impossible to know if Biden would truly support the Moon Government’s strategy of inter-Korean projects or humanitarian aid—in fact, I would say it is unlikely.

We simply cannot assume because one foreign policy adviser makes a comment in one direction does not mean their ideas will survey a full-throated policy review in 2021. Remember, this is one voice among many who are advising Biden.

However, we should be clear, the idea of maximum pressure is fiction in the first place. With 90% of North Korea’s exports going through China, it is Beijing that is tasked with controlling nearly all economic sanctions—and the DPRK’s real fate. And that means while the idea sounds tough, neither Seoul nor Washington can ensure if it is effective or not.

Maximum pressure is a great do-something slogan that sounds tough, but a really bad strategy in practice.