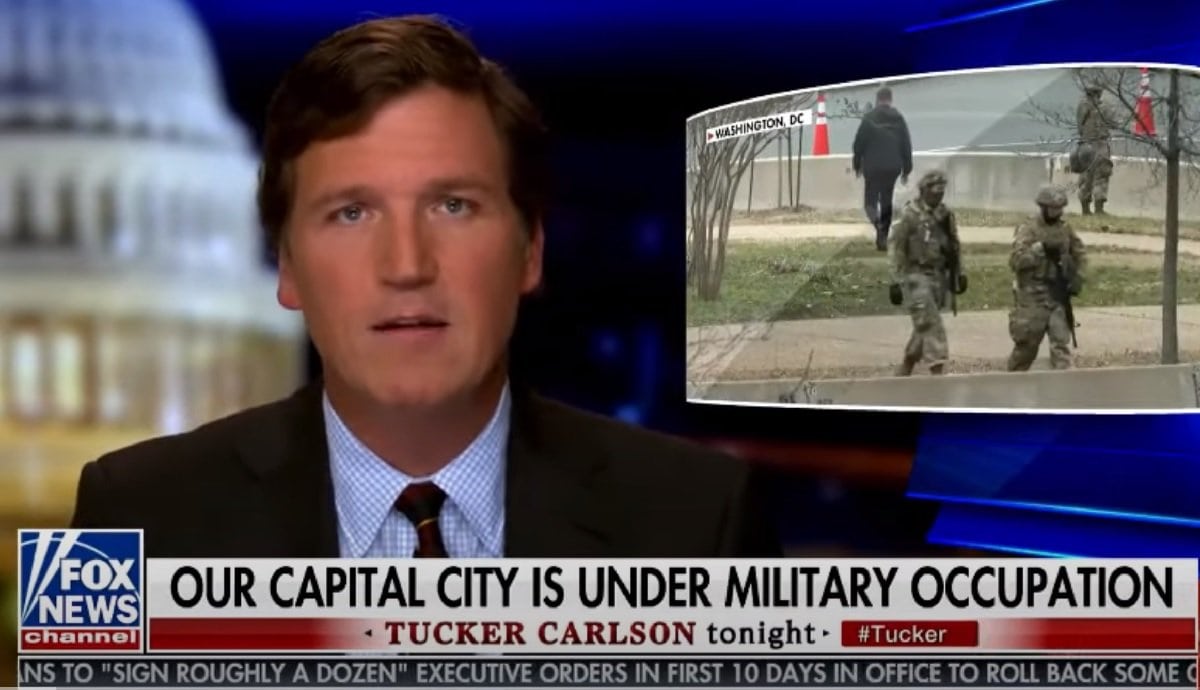 In what surely will be a topic of debate in the days ahead, Fox News opinion host Tucker Carlson in his opening monologue last night came out swinging, declaring that:

“Our capital city is currently under military occupation. By Inauguration Day, there are expected to be more than 26,000 armed federal troops in Washington. No living American has seen a moment like the one we’re watching now.”

He pressed on nearly twenty minutes overall. Here is a little more of what he said, and you should really watch the whole thing, no matter where you sit on the political spectrum:

“For comparison, Lyndon Johnson sent a total of 13,600 federal troops and D.C. Army National Guardsmen to quell the race riots in Washington that followed the assassination of Martin Luther King Jr. Those riots injured hundreds of people and killed at least 13. In 1864, as the Civil War raged on the other side of the Potomac and Americans died every day in large numbers on the battlefield, there were fewer federal troops protecting Washington, D.C., than there are right now.

But according to our leaders, the so-called “insurrection” of Jan. 6 was much worse than any of that. So in response, they have assembled the largest military presence in Washington in all of American history during peacetime. It’s truly a national force, with Guardsmen from every state in the Union as well as Puerto Rico. The question is, why?

For decades, Washington, D.C., had the highest per-capita law enforcement presence in the country and one of the highest in the world. There was no need to fly in troops from Alaska to keep the city safe. But keeping the city safe is hardly the point of this exercise. The murder rate in the District of Columbia has risen with terrifying speed over the last six months. Men, women and children have been shot to death in the streets, but no one in charge seems to care about that or even notice. So no matter what they are telling you, those 26,000 federal troops are not there for your safety.

Instead, unmistakably, the Democratic Party is using those troops to send the rest of us a message about power: “We’re in charge now. We run this nation, from Honolulu to our colony in the Caribbean and everywhere in between, very much including where you and your family live. Do not question us men with guns. We control the Pentagon.” And indeed, they do.

Republicans have spent years ignoring the leftward drift of our officer corps, but we can’t ignore it now. The mask is off our military leadership. The very same generals who howled at the idea of deploying American troops to stop an invasion of our southern border sent tens of thousands of soldiers with rifles to Washington purely as a show of force on behalf of the political party they support. Once they did that, they allowed Democratic politicians to degrade and politicize the military itself.

Democrats in Congress demanded that the troops sent to Washington this week submit to a political purity test — “ideological vetting, as they put it — to make certain that every soldier professed loyalty to the new regime. Not loyalty to our country, not loyalty to our Constitution, but loyalty to the aims of a specific political party. Nothing like that has ever happened in America and just a few months ago, it would have been unimaginable. Suddenly it’s compulsory.”